Health care on trial: Court case in B.C. could open the door to privatization

Canadians regularly point to universal health care as a source of national pride. Tommy Douglas, the father of medicare, was voted greatest Canadian in a CBC contest. But in a week, the public health care system goes on trial, in a case that could ultimately result in profound changes across the country.

On Sept. 6, the B.C. Supreme Court will hear a lawsuit led by Dr. Brian Day against the provincial government. Dr. Day, who owns a for-profit surgery centre, seeks to strike down legislation that puts limits on how doctors can profit from medically necessary services.

Ricochet connected by phone with Adam Lynes-Ford from the BC Health Coalition to find out what the court case could mean for Canadians.

Briefly, can you outline the implications of the court case for health care?

Fundamentally the potential implications of the lawsuit are that many people in Canada won’t be able to afford health care and many people will end up waiting longer for treatment. This lawsuit strikes at the bedrock of Canadian public health care, which is the agreement that we will all be able to access care when we need it, based on our need and not our ability to pay for it.

Let’s start getting into the case. Who is Dr. Brian Day?

He is the co-owner of the Cambie Surgery Centre. That is a private for-profit clinic in Vancouver. He has been a vocal proponent of for-profit care for quite a long time.

His clinics were the subject of a bunch of complaints by patients who were trying to access care there. As a result of their complaints, he got notice that his clinics were going to be audited. Instead of opening his doors and allowing the audit to take place and then reimbursing patients that he may have illegally billed, he joined with a bunch of other for-profit clinics and launched this constitutional challenge.

We see from systems across the world the terrible health outcomes and financial outcomes when people are turned away for medically necessary care because they can’t afford it.

Dr. Day fought the audit for years in court before the Province finally got entry into his clinics and were able to do a limited audit, only over a period of 30 days. But what they found was nearly half a million dollars in illegal billing. In some cases, the physicians in the clinic were charging up to seven times the legal amount.

There’s a second audit underway looking at specific physicians working in Dr. Day’s clinic, because what was also found was evidence of double billing, which is essentially double dipping. Let’s say you’re a doctor and I come to you for a procedure, and you bill me the MSP amount and then you turn around and also bill MSP the same amount. (MSP is B.C.’s Medical Services Plan, which covers medically necessary services in the province.) You essentially charge twice for the same thing. In that first audit they found evidence that was happening, so they’re doing a more thorough audit to find the extent of that practice.

The case gives insight into the kind of practice that Dr. Day runs and would like to expand in Canada, and it also gives us a sense of the really problematic things that can go on in private health care facilities when profit is the motive.

What is Dr. Day's argument?

His plaintiff’s argument is that certain sections of BC’s health care legislation are not constitutional. There are a couple of specific rules that they are challenging as unconstitutional.

The first rule is against extra billing. That means that right now doctors are not allowed to charge above and beyond a certain amount for medically necessary care. That’s how we make sure that care is based on need and not ability to pay. That’s a tenet that is implemented across the whole country.

The reason we say the case has implications across the country is that those rules are based on the Canada Health Act, a federal act, and every piece of health care law across the country has those same rules. If they were found to be unconstitutional here in B.C., it would be a domino effect across Canada.

The BC Health Coalition is an intervenor in the case. What is your organization’s stance?

We’re in an intervenor group with Canadian Doctors for Medicare, two doctors, and two patients. The doctors in the group want to be able to provide care to their patients based on need and not be in a position to have to turn away people who don’t have the right kind of private coverage or can’t pay. The two patients in the group have complex health conditions, rely on an accessible public health care system, and are really concerned about what a privatized U.S.-style health system would mean for them.

Our stance is that we must maintain access to health care based on our needs and not our ability to pay. We see from systems across the world the terrible health outcomes and financial outcomes when people are turned away for medically necessary care because they can’t afford it.

Wait times are one of the things that are going to be discussed in the case. We are quite concerned that in some instances wait times are too long, and we really want to see those waits addressed so that people are getting care in time. Outside of the case, we continue to advocate for improvements to wait times. In the case, we’re pointing out that the changes that Dr. Day would like to make would most certainly make waits longer for most people. They would allow a very small group of people who have a lot of money to be able to pay to jump ahead in line. The vast majority of regular people would have to wait longer.

What are some of the ways that wait times can be improved? What are the alternatives to what Dr. Day is proposing?

Right now 18 per cent of the operating rooms in B.C.’s public hospitals are not regularly staffed. None of them have extended hours. The B.C. government has identified this as something that needs to be addressed. We need to be fully using our current capacity. The Doctors of BC have also pointed it out. So that’s one very concrete thing we could do.

Another thing we’re advocating for is providing adequate support to people in communities to keep them out of the hospital in the first place. One of the main reasons for waits in hospitals is there are people, many of whom are elders, who need a place to be and aren’t getting the care they need in their community. That would make a huge difference to wait times and quality of life for seniors across the country.

Can you talk about how Dr. Day would like doctors to be able to work in both private and public health systems?

In B.C. a doctor can fully opt out of the MSP system. If they do that and work entirely privately, they’re actually allowed to charge whatever they like. At some point in the preliminary hearing, the judge was looking at this and looked up from his papers and addressed Dr. Day’s lawyers and said, “Wait a second, you’re already allowed to do this legally?” And they said, “Well yes, but there’s no business case for it.” So yes, they can do it, but can’t make enough money. A lifting of the ban on extra billing would allow doctors to work privately and charge whatever they like, and they could also be working in the public system, and subsidize their business with money from the public purse.

What started all of this was patients getting overcharged or turned away for medically necessary services.

What it would essentially set up is another parallel, private tier of a health care system alongside the public one. A lot of people hear that and think, “Wouldn’t it just pull people away from the public wait lines and there would be shorter waits for the public and it would work out for everybody?” Unfortunately when we look at countries around the world, it doesn’t work that way, because we draw away those health care professionals that we rely on. Over time we end up with unequal tiers. The small group of people who can pay for faster service can jump ahead, but people who rely on the public tier end up with longer waits and a lower quality of care because the public side is weakened and weakened.

How similar is the position of the Province of B.C. to your organization’s position?

The Province of B.C. is making a number of arguments and counterclaims. They’re arguing that a single-tier universal system is the fairest and most efficient way to provide care to people, and it also is most efficient money wise. They will provide a lot of evidence, again from countries around the world, showing that wait times would actually grow if we had the kind of system that Brian Day would like to have in Canada. There are a number of reasons for that.

For instance, one of the things that the Province will point out is that when doctors have a profit incentive to see patients in a private setting, they’re more likely to exaggerate their waits in the public system in order to encourage people to see them in a private setting, where they will make more money. Of course that’s not all doctors, but the evidence says there are effects like that when you have doctors working in both sides of the system. Over time, not only do you have longer waits in the public system, but it actually obscures the wait times in the public system and patients are not able to make an informed choice.

It sounds like the Province is really going to bat for public health care.

So far it does sound like they’re intending to really vigorously defend public health care.

What started all of this was patients getting overcharged or turned away for medically necessary services because they couldn’t afford the amount quoted to them at Cambie Surgery Centre. They complained to the Province because it is illegal. Eventually they brought a legal petition to try and force the Province to enforce the law. That’s when things ramped up and the Province notified clinics that they were going to audit them.

This is as much the patients’ stories about their fight to get care when they need it regardless of how much they can pay.

This interview has been edited and condensed. 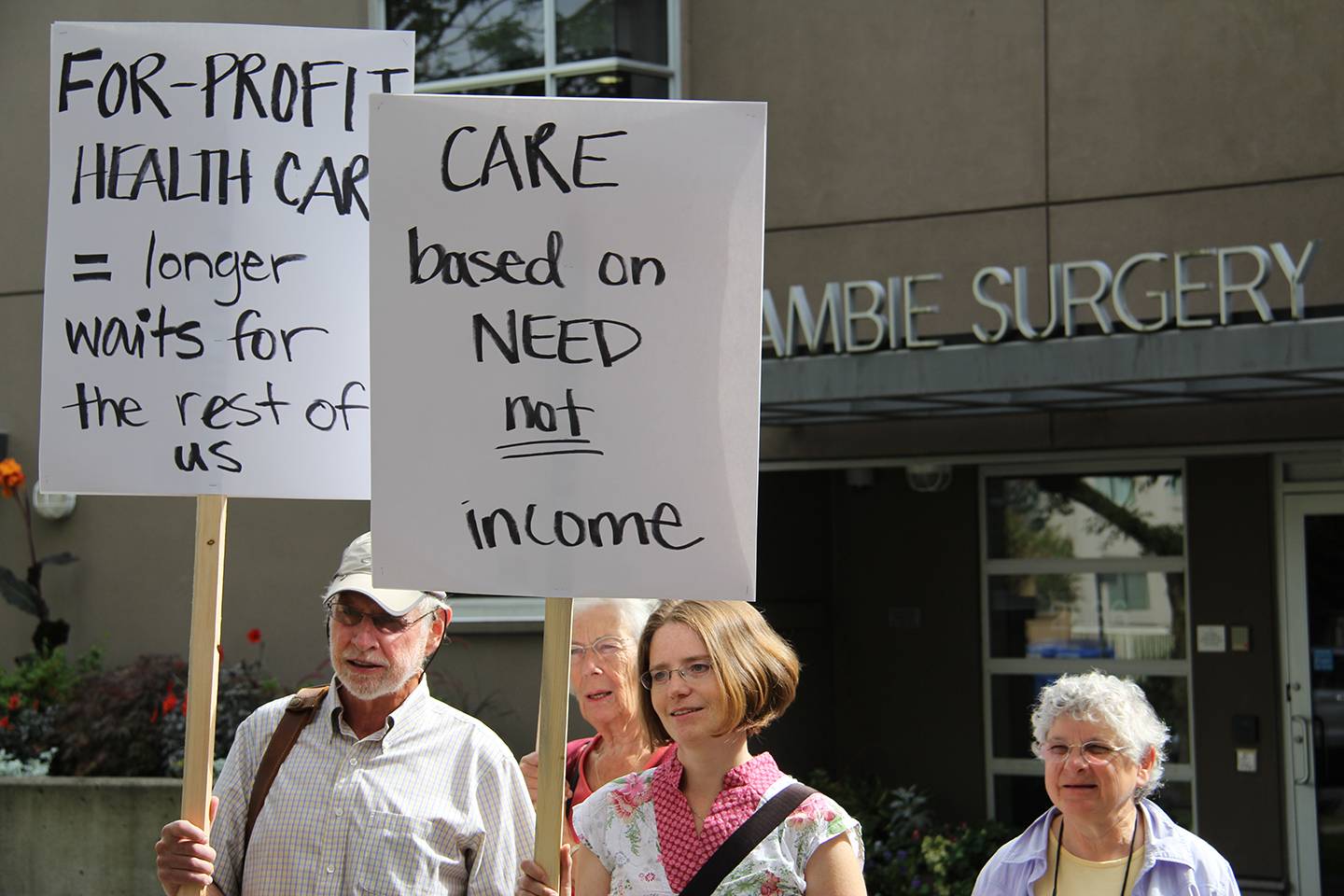