“Why are you willing to get arrested to stop this pipeline?” It’s a question that we answered to family and friends countless times in the lead up to the Climate 101 action today in Ottawa, in which 99 of us were arrested by police just outside the doors of parliament.

We talked about standing in solidarity with Indigenous peoples, like the Tsleil-Waututh Nation who have been fighting on the frontlines against Kinder Morgan since day one. We talked about how being in our early twenties, we’ve never lived through a month of below average temperatures. We thought about the die-off of the Great Barrier Reef, wildfires in western Canada, desertification, drowning small island states.

Sometimes, in fact, thinking about all the reasons we took action got overwhelming. But that’s when we would remember the real reason we were willing to get arrested to stop the Kinder Morgan pipeline — because my generation has power. With a surge in youth turnout in last year’s election my generation helped deliver this government its mandate, so much so that many pollsters and pundits point to millennials as the main reason the Liberal Party currently has a majority.

Monday’s action on Parliament Hill should be seen as putting Justin Trudeau on notice — if he approves a pipeline, he’s going to lose millennials.

The numbers break down like this. In 2015, 45 per cent of people between the ages of 18 and 25 voted for Justin Trudeau’s party, many looking to the Liberal leader as a progressive, climate-minded potential prime minister, attuned to the interests of young people in this country. Some of us cast a vote for Trudeau because we wanted to see the end of the Harper era, and because, on the election trail, Trudeau promised to respect Indigenous rights and listen to climate science.

Like many in our generation, we believe in moving past business-as-usual pipeline politics. That’s probably why a CBC poll from earlier this year found that “those under the age of 35 are consistently more likely to oppose [pipeline] proposals.”

Monday’s action on Parliament Hill should be seen as putting Justin Trudeau on notice — if he approves a pipeline, he’s going to lose millennials. If he loses millennials, he could lose the 2019 election.

If that seems like hyperbole, remember that nearly 100 youth and students — 99 to be exact — showed up in Ottawa and were arrested today to stop this pipeline. Remember that we’re not stopping, and when we all go home we’ll continue to build this movement and bring in more and more young people to stand up for our generation.

That, in the end, is why we got arrested today. Not just because of the threat to our generation and our future, but because of the power of our generation in standing up for that future. During the action we sang and chanted “we believe that we will win.” And when young people organize to stand up for climate justice and in support of Indigenous rights, we really can win. 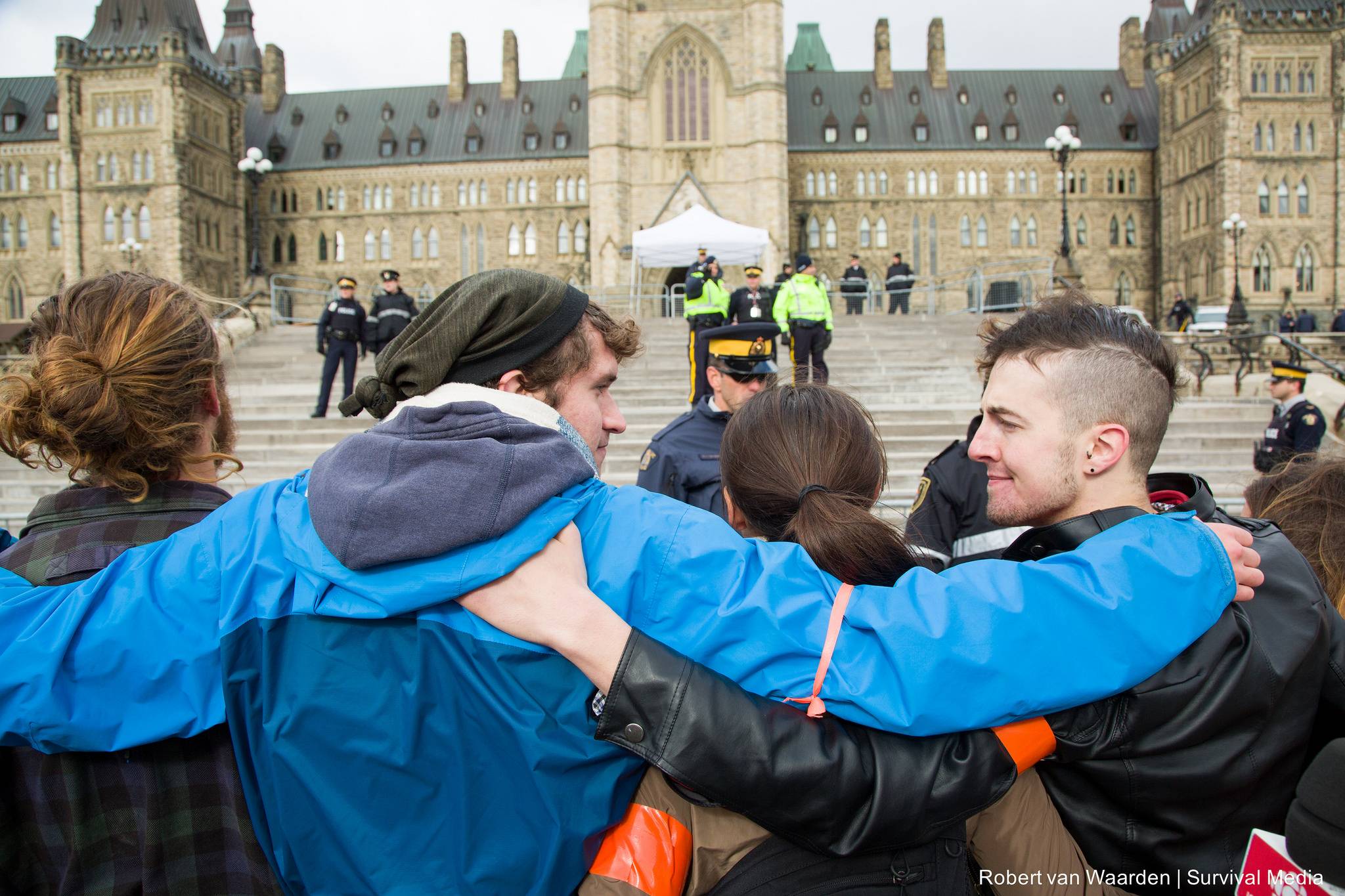 Survival Media Agency
As a top polluter, what is Canada’s responsibility to humanity?
The Dirty Dozen: ‘Carbon bombs’ threaten to blow up Canada’s climate commitments
I was raised in an Indigenous community — but even that doesn’t make me Indigenous