Montreal’s man of grace: The story of Leonard Cohen

The whole world needs the kind of love Cohen gave us

Leonard Cohen, the legendary singer and songwriter whose prolific career spanned five decades, has left this world at the age of 82. His death was confirmed on the singer’s Facebook page by Cohen’s label.

It is with profound sorrow we report that legendary poet, songwriter and artist, Leonard Cohen has passed away. We have lost one of music’s most revered and prolific visionaries.

From my perspective as an Indigenous woman and poet, it is inarguable that Cohen was an inspiration for legions of artists. He has influenced performers of every genre, from poetry and song to the visual arts.

Cohen was graced by an indelible generosity of spirit, and he knew how to share it with the rest of us.

Leonard Cohen was an intensely spiritual man, and we, who embraced his sensitivity, have been changed by the man’s poetry. He was graced by an indelible generosity of spirit, and he knew how to share it with the rest of us. His songs bring spiritual concepts into the body, the sexual and needy nature of the human experience, while giving these concepts a sense of space, meaning and respect in relation to the spirit; concepts that Indigenous cultures have honoured since time immemorial.

Growing up on Mount Royal

Poets walk the path of the heart, and Cohen’s earliest existence sprang from the slopes of Mount Royal. Cohen’s walk in life began on September 21, 1934 at Montreal’s Royal Victoria Hospital, a sprawling gray stone edifice that seems hewn from the face of the island’s south facing slope, but somehow reaching for divinity. The backyard of Cohen’s family home at 599 Belmont Avenue opens onto the slope of Murray Park, a sweeping 14-acre expanse with views of the St-Lawrence River, whispering oak trees, and the melancholy song of lone crickets. Yet, it is still a place the neighbourhood flocks to when snow starts to fall and there’s a chance of sliding down its slopes in an exuberant celebration of life.

I am Indigenous. I am a woman, and I think that the whole world needs the kind of love Cohen gave us through his words and searching heart. A wonderful soul has left us.

As an Indigenous woman living in Montreal, every time I walk on Mount Royal, I think about the moccasin trails of thousands of years of Mohawk people reaching for a spiritual communion, and today it seems fitting to me that Cohen was born on Mount Royal.

Cohen’s father, Nathan Cohen, was a prosperous Jewish businessman in the suit business, and his mother was Masha Cohen, a rabbi’s daughter of Russian descent. Cohen attended Roslyn primary school in the 1930s, up the hill from his family home. Nathan Cohen died suddenly from lung complications when the young poet was just nine years old. Of his father’s wake, Cohen said, “I cut one of the wings of the bow tie off and I wrote something on a piece of paper—I think it was some kind of farewell to my father—and I buried it in a little hole in the back yard.”

In later years, Cohen went on to attend Westmount High School down the hill, where he became acquainted with the works of Lorca, Yeats, and T.S. Eliot.

Cohen’s fascination with and love of the poet Lorca is a theme that spans his vast career. This love for Lorca’s words and spirit is especially evident in Cohen’s first book of poems, The Spice-Box of Earth. In a speech at the Prince of Asturias Awards in October 2011, Cohen explained, “It was only when I read, even in translation, the works of Lorca that I understood that there was a voice. It is not that I copied his voice; I would not dare. But he gave me permission to find a voice, to locate a voice, that is to locate a self, a self that is not fixed, a self that struggles for its own existence. As I grew older, I understood that instructions came with this voice. What were these instructions? The instructions were never to lament casually. And if one is to express the great inevitable defeat that awaits us all, it must be done within the strict confines of dignity and beauty.”

It was on the slopes of Mount Royal, at Murray Hill’s tree-speckled park, that Cohen first met his most influential music teacher, a guitar playing Spaniard who Cohen said taught him the six chords that elevated his career as a songwriter into song. Cohen only got to have two lessons. His Spanish guitar instructor took his own life. But he gave Cohen his song, and earned the poet’s lifelong gratitude.

Gifted with a voice and a song Cohen went on to study at McGill University, where he befriended the likes of A.M Klein and Irving Layton. He published The Spice-Box of Earth, which was a great success in the Canadian literary landscape.

The book was well received by the Canadian public, but Cohen chose to exile himself to the land of T.S. Eliot, England, with the help of a $3,000 grant from the Canada Council for the Arts. Upon discovering England’s dreary rainscape, the poet bought a blue Burberry raincoat and soon after fled to the sun-kissed Greek island of Hydra, where he wrote Beautiful Losers and met Marianne Ihlen, a beautiful Norwegian woman and mother who had been forsaken by her famous husband.

The two lived a decade-long love affair on Hydra, which went beyond a traditional definition of coupledom and extended into a lifelong friendship that only ended with Marianne’s death in August 2016. Cohen addressed an emotional and highly publicized letter to her shortly before she died.

The rest is legend. Cohen moved to Nashville and wrote for the likes of acclaimed folksinger Judy Collins, and gave his first shy performance in 1967. He released Songs of Leonard Cohen in 1967 and Songs from a room in 1969, featuring “Bird on a Wire.” Cohen went on to tour the world, beginning in 1970. There were troubles with drug and alcohol abuse. He later said he played a 1972 show in Jerusalem on LSD.

Cohen went on to have a family, and eventually became a Buddhist monk with Zen master Roshi.

A great example of his complete compassion was the story of embezzlement by one of his former managers, Kelley Lynch. She had, in fact, siphoned off much of Cohen’s life savings, adding up to $5 million dollars.

Suddenly broke, Cohen was forced to mount a world tour to cover his living expenses. The tour earned him millions, as fans flocked to one final series of shows.

As a child I remember watching Leonard Cohen perform live on the CBC, while my mother made spaghetti for supper, and thinking that he was so interesting, not only because he put on a show, but because he was honestly searching for meaning through words, language, and sounds, which to me, is beautiful and humane.

In the aftermath of Cohen’s literary acclaim as a poet at a young age, the National Film Board of Canada made a documentary film on him titled Ladies and Gentlemen Mr. Leonard Cohen, in which the poet is rather humorously featured as waking up and looking out of his window in his underwear, and saying, “My real concern is to discover whether or not I'm in a state of grace.”

A state of grace is that kind of balance with which you rise to the chaos that you find around you. It’s not a matter of resolving the chaos, because there is something arrogant and warlike about putting the world in order.

Today, Remembrance Day, I woke up to the voices of children attending the Jewish school and temple Cohen’s family built, to which my home happens to be adjacent. Today, I will let Cohen dance me to the end of love. Today, I will pray, I will give thanks, I will put down tobacco. I will do this in my own way “within the strict confines of dignity and beauty.”

I am Indigenous. I am a woman, and I think that the whole world needs the kind of love Cohen gave us through his words and searching heart. A wonderful soul has left us.

It is extremely sad that this poet and man of grace and beauty, who inspired millions of people, died in the same week as a U.S. president was elected, amidst a political climate of intolerance and fear, who represents the antithesis of his life’s work.

The exhibition “Leonard Cohen: A Crack in Everything” at the Montreal Museum of Contemporary Arts is scheduled to open in 2017, as part of the city’s 375th anniversary celebrations. 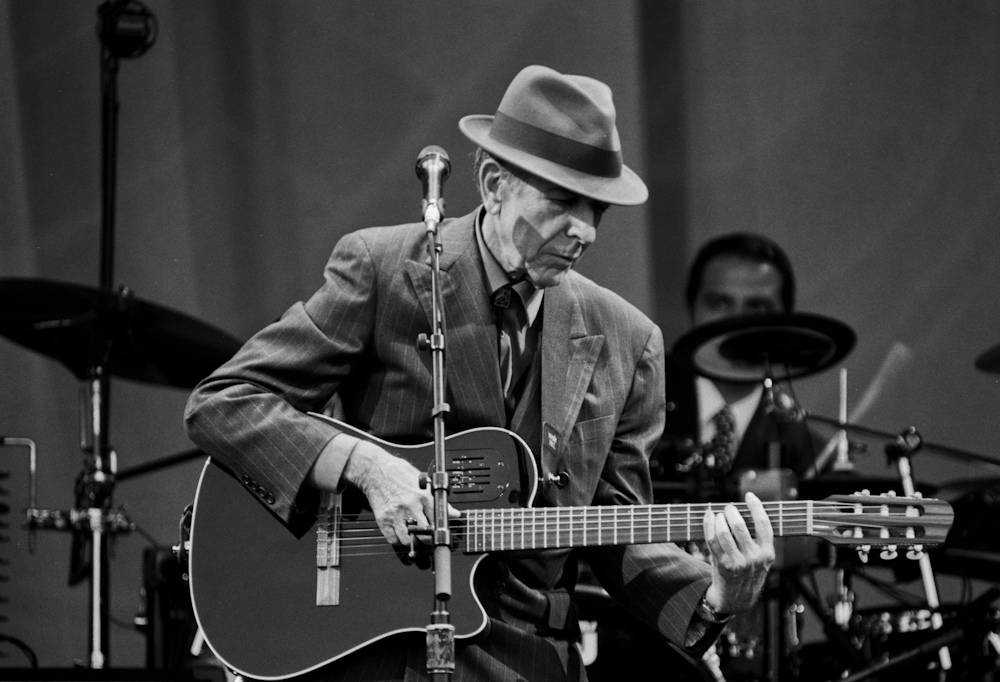 Chris Boland / www.chrisboland.com
‘Gut-wrenching:’ Drilling starts under Wet’suwet’en river
Canada should use this moment to return Crown lands to Indigenous Peoples
Health care in Canada is being deliberately sabotaged