If you’re a close observer of federal politics in Canada just tuning into the B.C. election campaign, you may be confused by the role being played by the province’s Green Party.

In key interviews in the final days of the campaign, Weaver has made sharp criticisms of the B.C. NDP, contrasting opposition leader John Horgan negatively with Clark while declining to attack the B.C. Liberals on their disastrous environmental record. `

In a 20-minute feature interview Wednesday on Global TV, the province’s most watched news broadcaster, Weaver had kinder things to say about Clark and the Liberals than Horgan and the NDP. When asked directly by journalist Keith Baldrey, Weaver did not rule out working to prop up a Liberal government.

Not only that, but when asked whether he preferred to work with the Liberals or the NDP, he went out of his way to attack Horgan with a favourite Liberal talking point, complaining about the NDP leader’s supposed temper problem. (The hashtag #CalmDownJohn was pushed by the Liberals during the televised debate.)

In response to Global’s question, Weaver failed to say a single word about the B.C. Liberals’ disastrous environmental record, their disregard for their own climate leadership team’s recommendations, and their agenda for breakneck fossil fuel development.

Only NDP will ban big money

The other truly bizarre thing about Weaver preferring to attack the NDP in the dying days of such a close campaign is that the issues he has highlighted as determining whether he would help another party form government are policies supported by the NDP and opposed by the Liberals.

“I’ve been asked about deal breakers,” Weaver told Baldrey. “Number one, big money’s got to get out of politics.”

Horgan has said repeatedly on the campaign trail that the first legislation an NDP government would introduce is a bill to ban corporate and union donations from provincial politics. The NDP has, six times in recent years, introduced legislation that would ban big money from politics. The Liberals, awash in cash from big corporate interests and the super-wealthy, have blocked party and campaign finance reform every step of the way.

On Weaver’s two main deal breakers, the NDP has a better position than the Liberals.

As the New York Times has reported, B.C. politics is an outlier in North America for an almost complete lack of regulation of political financing. This gives the Liberals a huge advantage, and negative ads from the party and from so-called third-party organizations have flooded the airwaves for weeks.

One particularly mendacious attack ad shamelessly misrepresented Horgan and the LEAP Manifesto, a civil society initiative encouraging a rapid and just transition off of fossil fuels. For weeks, it seemed almost impossible to turn on the radio or watch a YouTube video without seeing these blatant smears.

“Number two,” Weaver told Baldrey on the topic of deal breakers, “is proportional representation…. People don’t think their vote counts. This is a way to make sure it does count.”

Once again, proportional representation is a system that, among the two leading parties, only Horgan’s NDP clearly supports. On Weaver’s two main deal breakers, the NDP has a better position than the Liberals.

Despite this, when asked who he prefers working with, Weaver decided to punch left.

“Would you feel more comfortable working with Christy Clark in government or with John Horgan?” Baldrey asked.

“I’m not going to pick one,” Weaver said, pausing again.

After Baldrey suggested that Weaver had seemed more comfortable in the past working with Clark, Weaver launched into a personal attack against Horgan.

“He’s gotta control his temper, he really does. He doesn’t bring people to want to work with him. He’s, he’s — whereas the premier, you can have, can have a respectful disagreement in a one-on-one conversation and it’s not personal.”

“The NDP are no better than the B.C. Liberals,” Weaver concluded in wrapping up the interview.

At no point during the 20-minute segment did Weaver bring up the Liberals’ support for the Kinder Morgan pipeline, the Site C mega-dam, or the multi-billion-dollar 10-lane bridge replacing the George Massey Tunnel. He briefly discussed climate change and the carbon tax, but failed to mention the fact the Liberals ignored key recommendations from their own climate leadership team. In fact, Weaver barely raised any environmental issues at all in the interview.

On environmental issues, the NDP unarguably has better positions than the Liberals.

Baldrey also briefly asked Weaver about issues including education and mental health, on which the Greens’ policies are closer to the NDP’s than the Liberals’. But, again, Weaver pivoted to attack the NDP, sounding very much like an ideologue of free market capitalism.

“I think our position on that is closer to the NDP than the Liberals, frankly. But, in terms of the economic plan, our position is much closer to the Liberals than the NDP, because frankly they don’t have an economic plan. Their economic plan is to have government retrofit its buildings with union workers. You know, that doesn’t incentivize industry. You need to send a signal to the market and let the innovation and creativity happen there in the market.”

The next day, in a feature interview on Vancouver’s most listened to AM news and talk radio station, CKNW, Weaver again refused to rule out a cabinet position in a future Liberal-led government.

On environmental issues, the NDP unarguably has better positions than the Liberals. There are many shortcomings in the NDP’s environmental policy — they attempt to straddle the fence on the issue of LNG, they don’t make a systemic critique of capitalism’s eco-destructive tendencies — but there is no dispute that they are far better than the Liberals on this front. Yet when asked point blank on radio station CKNW which party was better on the environment, the Liberals or the NDP, Weaver refused to choose, implying that they were both equally bad by saying, “Six of one, half a dozen of the other.”

Down to the wire

The B.C. Liberals have been in power for 16 years. The party is effectively a coalition of federal Liberals and Conservatives, backed by big corporate interests and the wealthy. Once a fringe centrist, small ‘l’ liberal party, the B.C. Liberals emerged as the dominant party of big business in the early 1990s after the implosion of the old Social Credit party, which had held power for much of the province’s history.

The current iteration of the Liberals is backed to the hilt by oil and gas interests and many powerful federal Conservative politicians. As premier, Christy Clark has essentially jettisoned any pretence of concern for climate and the environment.

The Green Party has been a small but significant factor in provincial politics for decades. In 2013, Weaver won the party’s first ever seat in the legislature. This time the Greens have a realistic shot at picking up a few more seats, especially on Vancouver Island.

The B.C. election is so close that there’s a slim chance the third-place Greens could end up playing a decisive role. With the right-wing, pro-corporate B.C. Liberals running neck-and-neck with the NDP, the Greens, even if they just retain their one seat and pick up a couple more, could end up holding the balance of power.

Many past leaders and candidates for the B.C. Greens have expressed concern that the party will help the fossil-fuel-boosting B.C. Liberals stay in power, urging voters concerned about the environment to vote NDP.

Stuart Parker, who led the Greens in the 1990s when they provided left opposition to an NDP government over issues such as logging in Clayoquot Sound and cuts to social assistance, is now backing the social democrats, stating, “The BC NDP’s commitment to electoral reform has got my attention. It will pave the way for democratic fairness in electing members to the legislature.”

Misha Oak, who ran for the Greens in the 2014 Vancouver municipal election, issued a pointed appeal to Green voters in a Facebook post on Friday:

Progressives beware. Please don't vote Green. Please vote for the BC NDP… Because of a longstanding underlying grudge with the NDP, they would rather support conservatives (BC Liberals/the NPA in Vancouver) than help their 'enemies' the NDP....

Also, if you examine the Green candidates. They are overwhelmingly white, 50+, straight, affluent and hold conservative values or credentials. There is very little diversity and/or representation of marginalized communities. They mostly run progressive candidates in ridings where there's no chance of winning. People support the Greens thinking it's a vote for the environment (and that's why I ran for them), but if you dig a little deeper, unfortunately it's a vote for a conservative with environmental persuasions.

The Green Party’s lack of diversity under Weaver’s leadership has been highlighted by a series of incidents with candidates during the campaign, most notably a cringe-worthy imitation of Martin Luther King by Saanich South candidate Mark Neufeld. (Weaver defended his candidate, in stark contrast to his volcanic denunciations of the federal Green Party when they adopted a motion supporting Palestinian human rights.)

Given the party has alienated many former Greens, and so many progressive and union activists, who is promoting it in this election? The big corporate media in B.C., whose main press outlets have once again unanimously endorsed the B.C. Liberals, have given uncharacteristically generous coverage to the Greens. Global TV has treated them respectfully and seriously, as illustrated by Baldrey’s feature interview.

The Green Party even has a designated pundit on Global TV, CJ Summers, who has held the role for at least two years. Summers was active in the 2013 Green Party campaign, and of late appears to have split his time between advocating for the Greens in the provincial election and intervening in the federal Conservative Party leadership race on the issue of gun policy. Summers runs an anti-gun-control pressure group known as Freemind Republic, and in that capacity he has recently interviewed federal Conservative Party leadership candidates.

In that context, Summers has praised both Kellie Leitch and Maxime Bernier. He recently described Leitch, who is running a xenophobic Trump-imitating campaign for Conservative leader, as a “true Canadian and patriot.” Not only that, Summers has described former B.C. Liberal cabinet minister Kevin Falcon as “a friend and mentor.”

With media pundits like this, a clearer picture comes into focus of who is really benefiting from the campaign being run by the current version of the B.C. Greens. 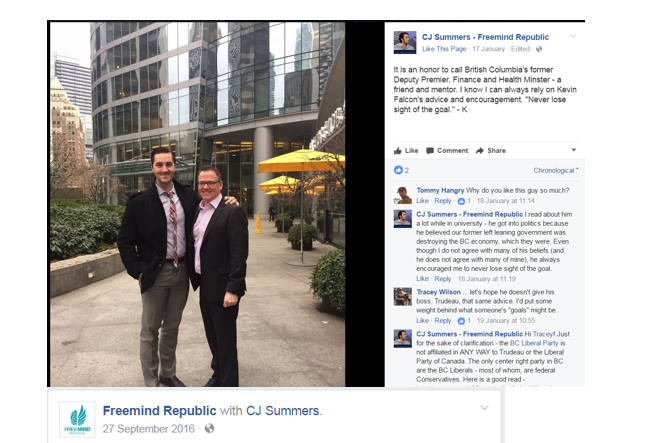 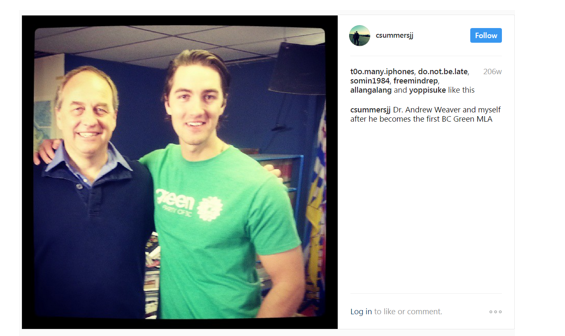