Travis Lupick's new book, Fighting for Space: How a Group of Drug Users Transformed One City’s Struggle with Addiction (Arsenal Pulp Press), tells the story of Vancouver’s frontline fight for expanded harm reduction services and an end to the criminalization of drug users. In this excerpt, Lupick gives a play-by-play on a particularly memorable demonstration at city hall.

Vancouver’s mayor of the day, Philip Owen, led a right-of-centre political party called the Non-Partisan Association. The plight of the Downtown Eastside and especially its drug users had caught his attention. But his constituency was on the west side of town among the upper-class, conservative voters who preferred the drug problem stay out of sight and out of mind.

On August 10, 2000, Owen gave in to the pressure of downtown business owners and enacted a ninety-day moratorium on further spending and new services for drug users in the Downtown Eastside.

[The Vancouver Area Network of Drug Users’] Bryan Alleyne did the math on how many addicts Owen’s spending ban would kill. “In the Downtown Eastside, a three-month moratorium on harm reduction measures is equal to ninety drug overdose deaths,” Alleyne said. He and [Dean] Wilson interpreted the mayor’s order as a literal death sentence for dozens of VANDU members and—as they were both injection-cocaine users during this time—quite possibly for themselves. They were angry.

One month into the moratorium, Wilson had an idea. He asked Dan Small if VANDU could borrow a few of the Portland’s 2,000 crosses. If city hall was going to kill ninety drug users, VANDU was going to make sure that the politicians and the people working there knew it.

The group with the coffin on their shoulders made its way to the front and set the black box down directly in front of Mayor Philip Owen and the councillors who were sitting in an elevated ring around him.

On September 12, 2000, [Ann] Livingston rented a big white van and Wilson and a few other VANDU members piled in. On the way to city hall, Livingston discussed strategy.

“Go easy on the mayor,” she said to Wilson. “He’s in a tough place, but he is an ally. Don’t yell, don’t do anything that could be attributed as violent,” Livingston continued. “Because you are an organization of drug users and drug users are written off all the time as being unreasonable. And so you’re going to go in as a voice of reason and compassion. And protect the mayor. Listen to the mayor. Understand that he may not be saying anything that you want him to say today, but that he is an ally who is in a really difficult position.”

Meanwhile, Bryan Alleyne was on a bus with another fifty drug users. They joined up outside city hall just before two p.m. On the grass that surrounds Vancouver’s city hall, they hammered ninety crosses into the ground. At the same time, a larger group marched straight up to the building’s wide front doors. It was a siege, but one Wilson led with strategy and tact.

“I walked up to the cops and I said, ‘Look, this is what we’re going to do,’” he recounts. “I gave them my card—I had a VANDU card—and I said, ‘If there’s a problem, phone me, and I’ll deal with it. We’re here to state our case and that’s all there is to it.’”

As Wilson spoke with two police officers, about forty people stood behind him, arm-in-arm. If the cops had flat-out refused to let them enter the building, things could have quickly turned ugly. They did make a half-hearted attempt, but pragmatism prevailed. The police allowed Wilson to lead his parade of drug addicts past them and into city hall.

That was the cue for a third group of VANDU members to spring into action. A friend of Livingston’s named Robert Cort had built a black coffin. A final group of six people had hidden around the corner with it and now, with Wilson’s parade keeping the doors open, they joined the end of the line. The crowd proceeded noisily up the stairs to council chambers, which they knew was in session, with the mayor present. A second pair of police officers was there waiting for them, but there wasn’t much they could do to slow the group’s momentum. VANDU entered the council meeting and the room went quiet.

The group with the coffin on their shoulders made its way to the front and set the black box down directly in front of Mayor Philip Owen and the councillors who were sitting in an elevated ring around him.

The message was clear: people were dying, and if politicians weren’t acting to stop it, they might as well be filling the graves themselves. Reflecting on that day for a documentary that was released a year later, Owen recounts the pressure he felt. “They were all looking to me,” he said. “I’m chairing the meeting, sitting in the mayor’s chair. And it was all eyes on Phillip Owen. What’s he going to do?”

Travis Lupick is a journalist based in Vancouver. His first book, Fighting for Space: How a Group of Drug Users Transformed One City's Struggle with Addiction, was published by Arsenal Pulp Press in November 2017. You can follow him on Twitter: @tlupick. 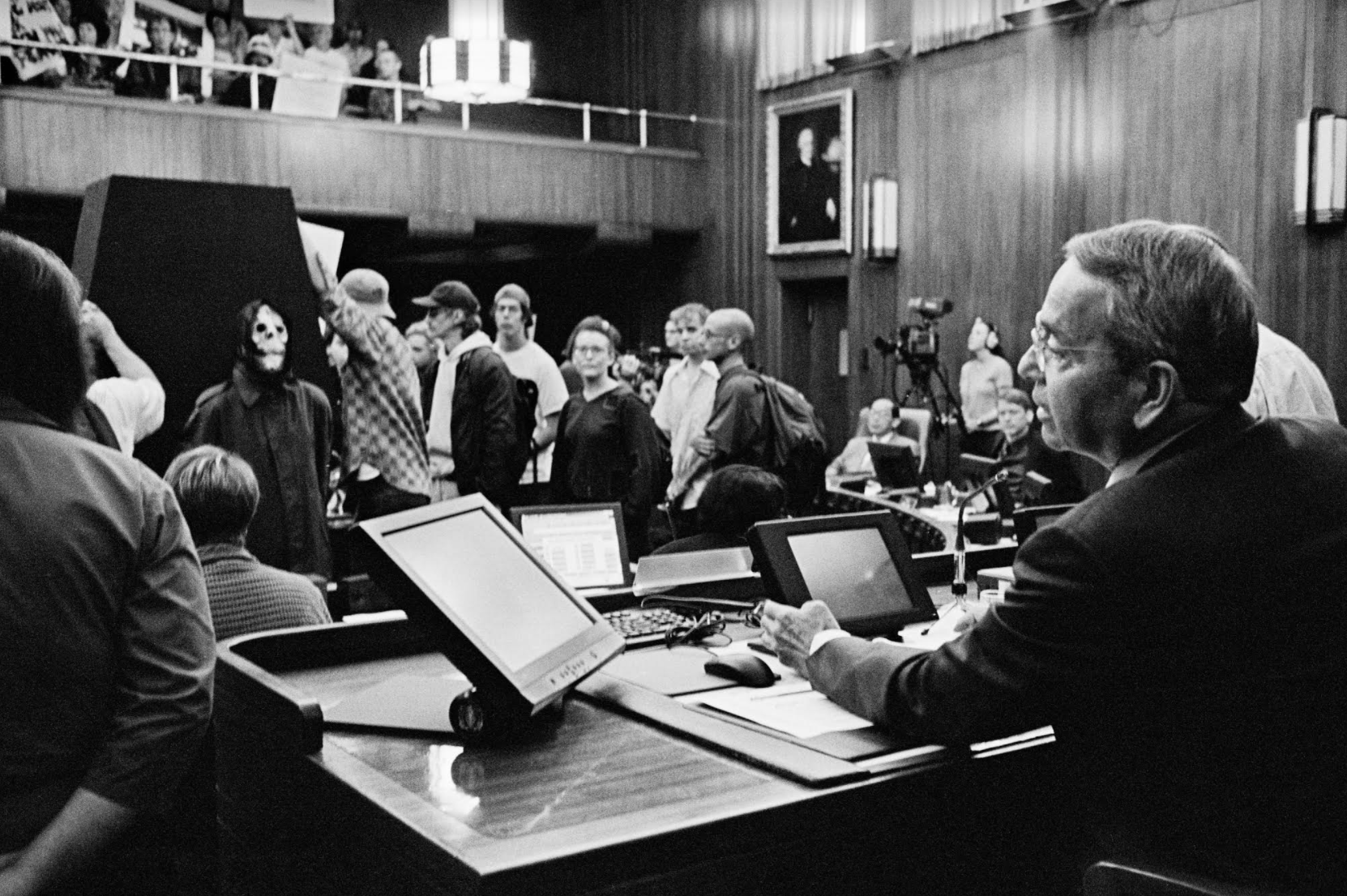