A nation is only as good as its leadership.

Take the Nisga’a, the first nation out of the modern-day treaty gate 14 years ago.

While the Nisga’a government has made some considerable strides, this latest move is truly baffling from a traditional standpoint.

While the Nisga’a government has made some considerable strides, this latest move is truly baffling from a traditional standpoint.

“Sayt-K’il’im-Goot: one heart, one path, one nation” is the vision statement of the Nisga’a government. Traditional laws, language and culture are listed as its foundation.

The Nisga’a ancestors may now be asking for the currently elected members of the government to remember to hold true to the latter.

What has been gained in nearly a decade and a half since the signing of a treaty with B.C. that cost the Nisga’a around 95 per cent of their traditional territory?

If the treaty route had been avoided by the Nisga’a, they would be better positioned to negotiate with mining, oil and and gas multinationals, which are vigorously banging on every First Nation’s door in B.C. before the implications of this summer’s Tsilquot’in Supreme Court decision are fully realized.

The Tsilquot’in decision asserted what northwest coast hereditary chiefs already knew: that First Nations are the decision makers when it comes to anything happening on their traditional territories.

Traditionally, members of each house group were informed of every major decision, and they would then let the hereditary chief who headed the house know what they wanted. Business was conducted through the potlatch or feast system, and the chief would announce the final decision in a feast hall.

I imagine the final decision wasn’t always the popular one; we are, after all, talking about people here. There have always been partnerships, and that will not change going forward.

The Nisga’a Lisims government has, by all accounts, made a clean break from its traditional hereditary structure in favour of a Western business model.

The Nisga’a Lisims government has, by all accounts, made a clean break from its traditional hereditary structure in favour of a Western business model. If respect of ancestral graveyards were a real concern, the mass burial ground that is under the Nisga’a Lava Memorial Bed Park, where more than 2,000 Nisga’a are known to have perished, would not be desecrated for the sake of a pipeline and a sum of money. Leaders with an unbroken connection to the history of their heritage would ensure that their ancestors’ final resting place would remain just that.

But there is the added pressure of having treaty funds come to an end, which occurred last spring for the Nisga’a. Now the Nisga’a government is monetarily independent, and revenue doesn’t create itself, right?

Premier Christy Clark must be thanking her lucky stars that the Nisga’a government is now contractually on side with her LNG pipedreams.

The Nisga’a government is being raked over the coals by people within its own community due to an alleged breakdown in communications. The lack of consultation is said to have preceded the LNG signing of the Prince Rupert Gas Transmission benefit agreement.

If the Nisga’a government did in fact genuinely reach out to its community members, who are spread throughout Canada, then why did any of the approximately 1,500 Vancouver-dwelling Nisga’a feel compelled to step up and claim the opposite was the case? If consultation throughout B.C. was thorough enough for all Nisga’a members, then why did a group of Nisga’a gather to protest near the lava beds on Remembrance Day? Why did one protester, Grant Barton, decide to interrupt an exclusive signing ceremony in downtown Vancouver? 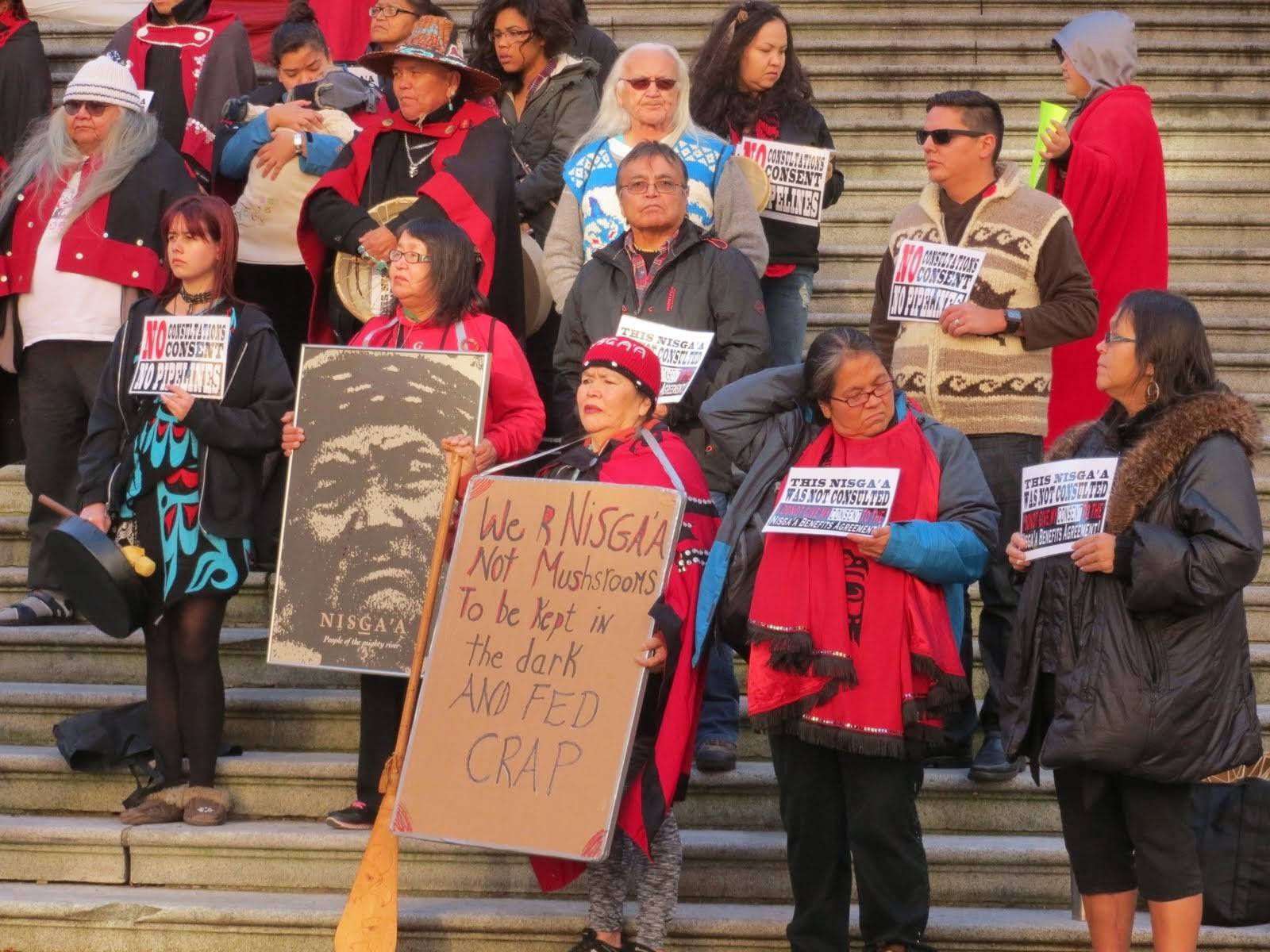 The Nisga’a government did hold community meetings and has spent years researching and negotiating the benefit agreement, but some Nisga’a say their government hasn’t done nearly enough, stating there were fewer than a dozen people who attended northern community meetings. Perhaps the Nisga’a are familiar with the efficacy of open houses from a community perspective?

However, if the accusations from Nisga’a community members are true, one thing clearly gained by the Nisga’a government in the last 14 years is the trickle-down political conduct of “don’t ask, don’t tell.” Thanks Harper and Clark. If the Nisga’a government had done its homework, it would know the LNG windfall promised during the last provincial election was mostly hot air.

It is too late for the Nisga’a to get traditional territory back, unfortunately.

What is salvageable is the rich culture, which most know to be important to the Nisga’a government. But what can Nisga’a members, especially the youth, glean from its leadership in allowing a sacred space to be carved up for money?

The answer is unsavoury — traditionally speaking.