Freedom of the press

On Monday, the RCMP forced their way through one of two checkpoints blocking access to Wet’suwet’en territory in order to enforce an injunction allowing the construction of a natural gas pipeline through unceded First Nations territory in Northern B.C.

The operators of the Gidimt’en checkpoint were unarmed and non-violent First Nations Elders, Hereditary Chiefs, and their allies. While asserting sovereignty over their unceded territory, they point to the failure of the government to obtain their free, prior and informed consent for pipelines to cross their land, and argue that the RCMP action is a violation of the United Nations Declaration on the Rights of Indigenous Peoples, which states that Indigenous peoples must not be “forcibly removed from their lands or territories.” The Supreme Court’s 1997 Delgamuukw decision acknowledged their traditional governance structure and the right of these Hereditary Chiefs to control their territory.

Press freedom lives and dies by the precedents that are set on the ground.

At least 14 arrests were made during the operation, and the RCMP have confirmed that they plan to undertake a similar operation to remove the second checkpoint at the Unist’ot’en camp.

We are gravely concerned by the RCMP's decision to bar journalists from the site of yesterday's raid, and their continued refusal to allow media access to the area today as police prepare for a raid on the Unist’ot’en checkpoint. The right to freedom of the press is guaranteed in our constitution and the right of the public to know is fundamental to our democracy.

As a media outlet, we stand in solidarity with journalists who are being blocked from doing their jobs by our federal police force. We note with concern that the department of public safety and the minister responsible for the RCMP, Ralph Goodale, have referred requests for comment to the RCMP, describing the exclusion of media as an "operational matter." Restricting the constitutional rights of journalists is not an operational matter, and this precedent must not be allowed to stand.

As Tom Henheffer, vice president of Canadian Journalists for Free Expression, told APTN, “It sounds like the RCMP is once again using every tactic that they can to bend the law as much as possible to prevent journalists from gaining access to sites.” “This is a tactic that is very commonly employed and is very difficult to fight against in the moment because [police] know that when you’ve got a bunch of officers with guns telling people what they can and cannot do, it doesn’t necessarily matter whether the law is on the RCMP’s side or not — because it takes too long for a journalist to get a lawyer, go to court to get an order to allow them to get on to the site.”

Journalists should not have to evade police in order to do their jobs.

Ricochet had a B.C.-based First Nations freelance journalist ready to go to the Unist'ot'en camp this morning, but knowing that he may not be allowed access, he decided to reassess the costs of making the long trip. Other journalists have told us they left before dawn Thursday or slept in the camp to avoid being stopped by police. Journalists should not have to evade police in order to do their jobs.

We also note with concern that the RCMP has justified their actions with reference to "safety concerns." The situation at issue was a non-violent protest by unarmed Indigenous Elders and others who did not resist arrest. Journalists frequently report from violent clashes between police and demonstrators in major cities, not to mention war zones. We are more than capable of assessing the risk of pursuing any given story on our own, and we do not accept that the police can decide for us what stories we can and cannot cover. Such nebulous concerns for our safety could conceivably be used to bar journalists from any contentious situation.

It seems clear that the RCMP's intent was to limit reporting from the site, rather than to safeguard the well-being of journalists. This is consistent with internal RCMP and government documents obtained by researchers under access-to-information legislation that show “police are not assessing Indigenous protests in Canada based on factors of criminality but are more concerned about the protestors’ ability to gain public support.”

We call on the Canadian government, specifically Minister Goodale, to repudiate this violation of press freedom and instruct the RCMP not to interfere with the work of journalists reporting on police activities. We further call on other media outlets to join us in denouncing this abuse of police power.

Press freedom lives and dies by the precedents that are set on the ground. This is a terrible precedent, which, if allowed to stand unchallenged, will erode the freedom that all journalists need to do their jobs and report on contentious situations without interference. 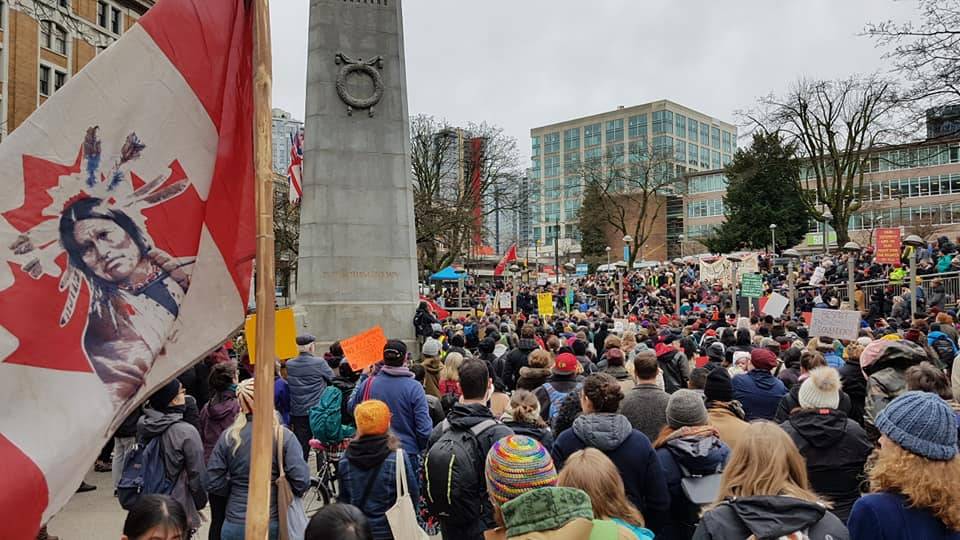 Vancouver rally against the RCMP action in unceded Wet'suwet'en territory
Irwin Oostinde
Carbon capture and storage: Another oil and gas subsidy?
The last of the untamed: Wedzin Kwa and the Wet’suwet’en fight to save her
INVESTIGATION: Canadian news media dominated by corporate lobbyists