No one should be deported for riding the SkyTrain

After working a shift at a Vancouver hotel, Lucia Jimenez, a migrant from Mexico, rode the SkyTrain home. Last year on Dec. 1 around 10 a.m., Transit Police boarded the train. They stopped Jimenez because she couldn’t provide proof of payment, but racial profiling escalated the situation.

"I understood that she had an accent when I spoke with her," Constable Jason Schuss later testified. "With that, I could tell she wasn't originally from Canada. That's the reason I tried to identify her."

Three weeks after Transit Police referred Jimenez to the Canada Border Services Agency, while she was in immigration detention awaiting deportation for being undocumented, she attempted suicide.

Every day in the Greater Vancouver area, at various SkyTrain stations and bus stops, Transit Police check fares and issue tickets. And every day, some of the people who are stopped are reported to the CBSA.

Despite the extent of referrals and arrests, the process remains intentionally shrouded in mystery.

But what’s less mysterious is that there exists a strong working relationship between Transit Police and the CBSA. CBSA Liaison Officers from the Inland Enforcement Section conducted multiple training sessions on the Immigration Enforcement Program for the majority of Transit Police Officers in February 2013 Transit Police represented a significant proportion of the Police Agency referrals to the CBSA offices," states the Transit Police’s Five Year Trend Report.

From November 2012 to January 2013, according to the report, Transit Police made 177 referrals or queries to the CBSA, amounting to almost two every day. According to more recent media reports in The Tyee and the Georgia Straight, Transit Police reported 328 incidents to the CBSA in 2013, one in five of which resulted in an immigration investigation.

Representatives of the Transit Police recently denied any formal or systematic collaboration with the CBSA. "We have a good working relationship with them," said Translink Police spokesperson Anne Drennan in one interview, "but there's no actual policy in place or anything like that. It's ad hoc." She says that most CBSA referrals happen in the process of identifying people. "Typically, we can figure out who the person is on our own, and if all of that fails, then the next tool, I guess is being able to call CBSA to see if they might have information regarding the person. It is the next database down the line."

Through an Access to Information request made by the authors, we recently obtained CBSA documentation that describes a "close working relationship" with Transit Police that goes deeper than Drennan’s administrative explanation. The 2013 report Transit Police referrals to the Canada Border Services Agency states that "CBSA Liaison Officers from the Inland Enforcement Section conducted multiple training sessions on the Immigration Enforcement Program for the majority of Transit Police Officers in February 2013." The document describes providing "training and awareness of the Immigration and Refugee Protection Act and [highlighting] some recent successful cases."

Lucia Vega Jimenez’s referral provides a case study of how this training is put into practice. After running the names that Jimenez had given him through his databases, Constable Jason Schuss received no response. Due to her accent, he attempted to establish her identity via the CBSA referral line. With CBSA guidance, he interrogated Jimenez on her full name, date of birth, her country of origin, and her date and port of arrival. The CBSA operator informed Constable Schuss of inconsistencies between the birthday and the date of arrival that Jimenez had provided. After this first call to the CBSA, Schuss threatened to charge Jimenez with obstruction of justice, upon which she provided her Mexican identity card with a full picture ID. Having already obtained identification, Schuss called the CBSA a second time. "At that point," he testified, "the operator instructed me to detain her under the Immigration [and Refugee Protection] Act and that they would send a CBSA agent to come speak with her."

Schuss’ second call to the CBSA suggests that the relationship between Transit Police and CBSA goes beyond simply identification. Schuss also testified that Transit Police officers drove Jimenez to the CBSA's holding cells at Vancouver International Airport. CBSA inland enforcement officer Josie Perri and Schuss gave conflicting testimony on whether Perri had asked them to do so or whether Transit Police had offered. Nevertheless, Perri testified that this deployment of local resources to subsidize the federal enforcement body "is a normal occurrence."

Another normal occurrence is the increasing employment of far-reaching police databases. Both Drennan and Schuss suggest that it is suspicious if a name does not appear in Police Records Information Management Environment (PRIME–BC) or Canadian Police Information Centre, the two police databases available to Transit Police. This suspicion was leveraged to legitimize their referral and prolonged encounter with Jimenez and to shift the focus away from the blatant racial profiling. However, when Jimenez produced her identity card, Schuss called CBSA without going back to his databases. Despite denying that he was treating the interaction as an immigration issue, he could not explain why he chose to call CBSA over consulting his alleged primary source of information.

Drennan and Schuss’ comments on databases also illuminate the Transit Police’s view of PRIME-BC as an expansive master database. The BC Civil Liberties Association has voiced concern about the expansion of police surveillance and record keeping on the general public, having discovered that 85 per cent of British Columbia’s adult population in 2011 had "master name records" in the PRIME-BC database. They wrote that "there is little in the way of protocol guiding how entries are made, how long information is kept, and the BCCLA frequently receives complaints about incorrect information being impossible to alter." It is telling that when the counsel for the coroner asked Constable Schuss if "everybody’s in PRIME," Schuss answered, "Correct."

The research shows that the surveillance of public transportation is well underway, with Transit Police happily collaborating with the CBSA in order to enforce immigration law. Considering the major role that racial profiling played in Jimenez’s referral, it is fair to ask whether racial profiling played a role in the other 327 referrals in 2013, including the four in five cases that did not result in an immigration investigation. This is part of a broader trend, including Transit Police coordination with the Vancouver Police Department to target and criminalize the most vulnerable, including racialized, Indigenous, homeless, poor and working people. Vancouver's Transit Police are the only armed transit police force in the country, with an annual budget of $31 million, which is expected to grow 25 per cent over the next few years.

We want this war on the poor and this clear collaboration between Translink and CBSA to end. Everyone deserves access to public transportation without fear of being criminalized, abused, detained, and deported.

We want this war on the poor and this clear collaboration between Translink and CBSA to end.

Transportation not Deportation! is organizing a vigil marking the one-year anniversary of Jimenez’s detention. Calling for access to transportation without fear, the event will be held on Sunday, Dec. 14 at 4 p.m. at Vancouver's Main Street SkyTrain Station. 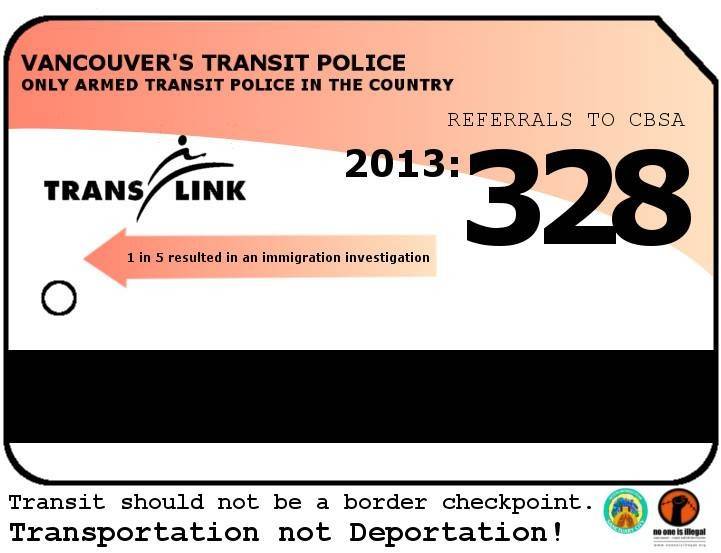 Transportation not Deportation!
‘Gut-wrenching:’ Drilling starts under Wet’suwet’en river
Canada should use this moment to return Crown lands to Indigenous Peoples
Health care in Canada is being deliberately sabotaged