The day the RCMP came: Gidimt’en checkpoint in photos

Journalist Jerome Turner was detained for eight hours and kept far from police actions, but he still documented the RCMP raid that resulted in four arrests

On the morning of Feb. 7, 2020, the second day of the RCMP’s enforcement of an injunction to allow Coastal GasLink pipeline workers into the area, police showed up at the barricades of the Gidimt’en checkpoint on unceded Wet’suwet’en territory.

Journalist Jerome Turner was on the scene, ready to report on the action. But police dictated that he stay in one spot, with an officer assigned to watch him, more than 60 feet from where arrests were being made. Yet Turner still managed to capture a series of remarkable images showing Gidimt’en checkpoint before and after the RCMP arrived and arrested four land defenders.

The Gidimt’en (Wolf/Bear) are one of the five clans that make up the Wet’suwet’en Nation. This is their territory. Their checkpoint lies along the road to the Unist’ot’en site, the heart of Wet’suwet’en resistance to the Coastal GasLink pipeline and the RCMP’s final target. 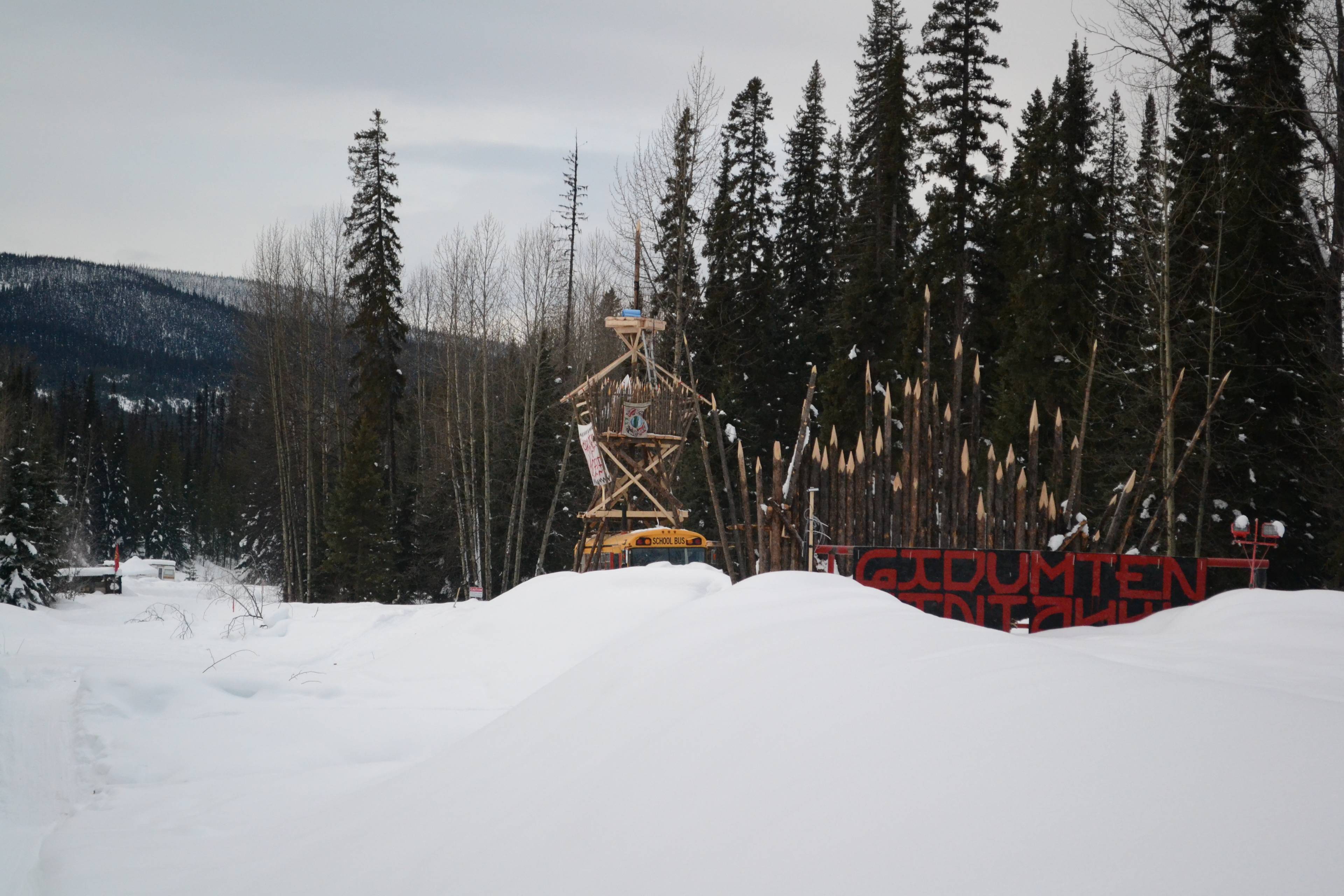 Under Wet’suwet’en law, one of the most egregious mistakes a person can make is trespassing. During the police raid, heavy machinery was used to clear the bridge. 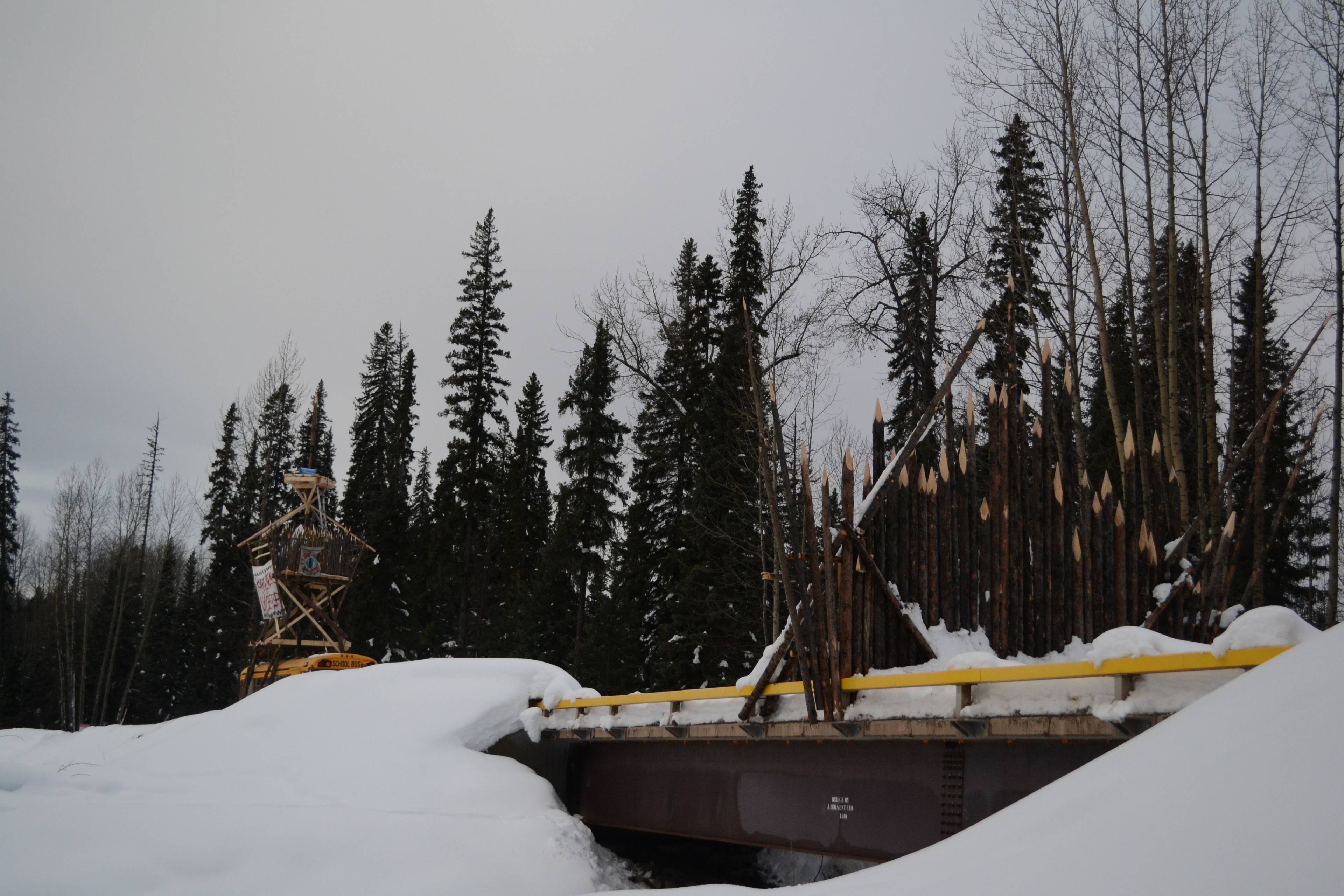 Before her arrest, Eve Saint, daughter of Wet’suwet’en Hereditary Chief Woos, delivered a message to the RCMP. “This is Wet’suwet’en territory,” she said. “We are unarmed. We are peaceful. This is unceded territory. This is the territory of Woos. I am his daughter. You are invaders. You are not allowed here. You are not welcome.” 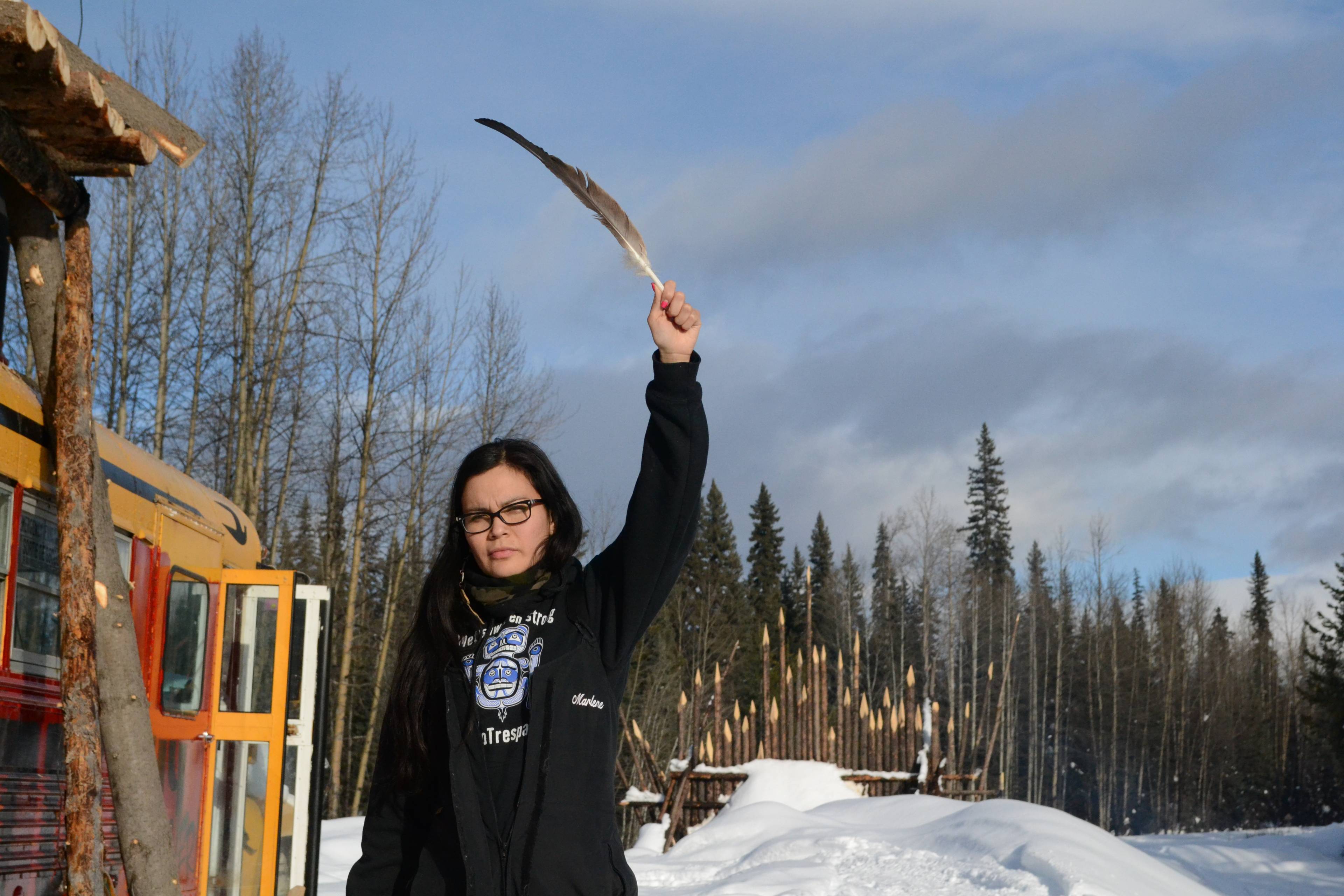 A tower built atop a bus provides a lookout over the road. 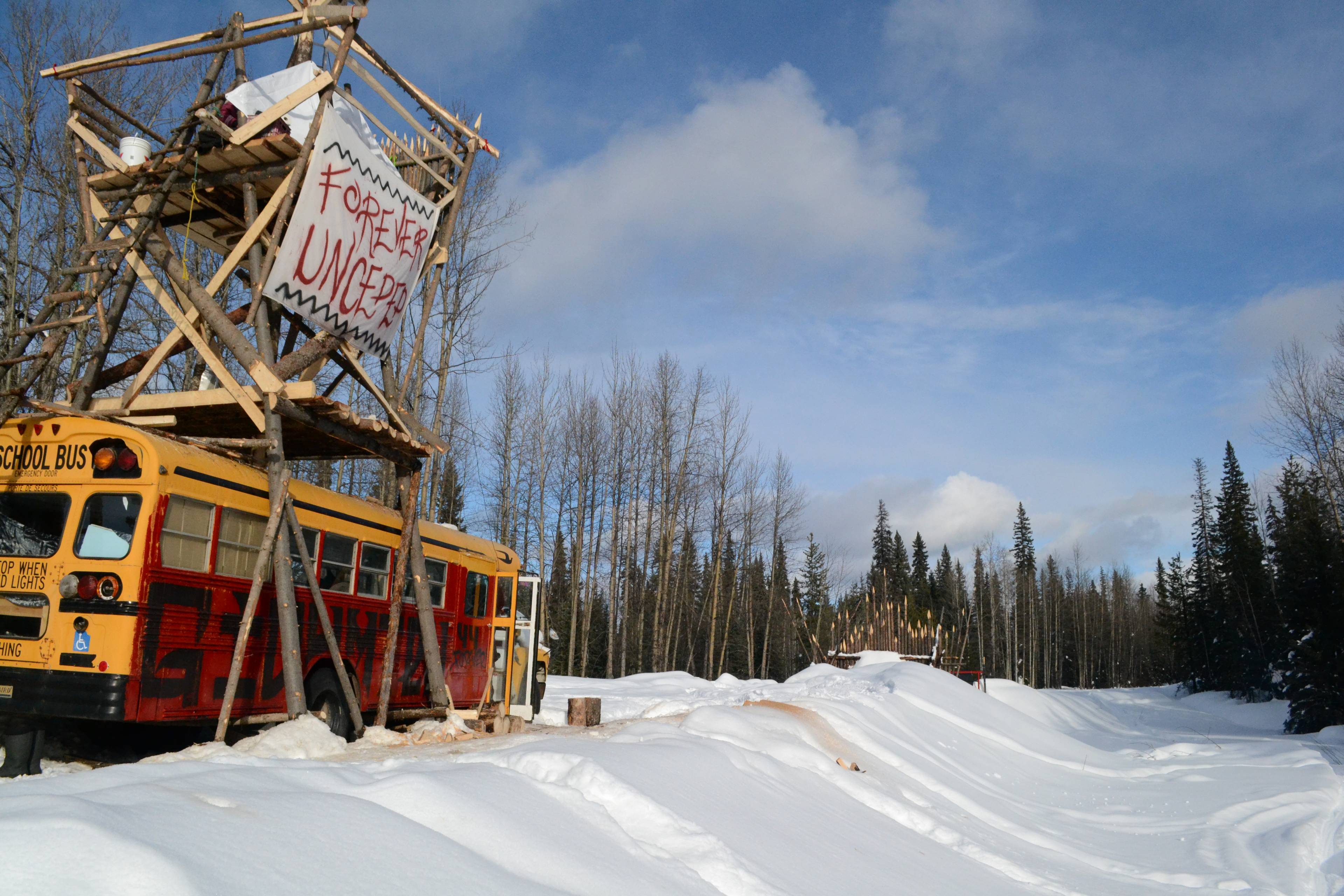 The Wet’suwet’en have not given up their territory through treaty, war, or surrender. 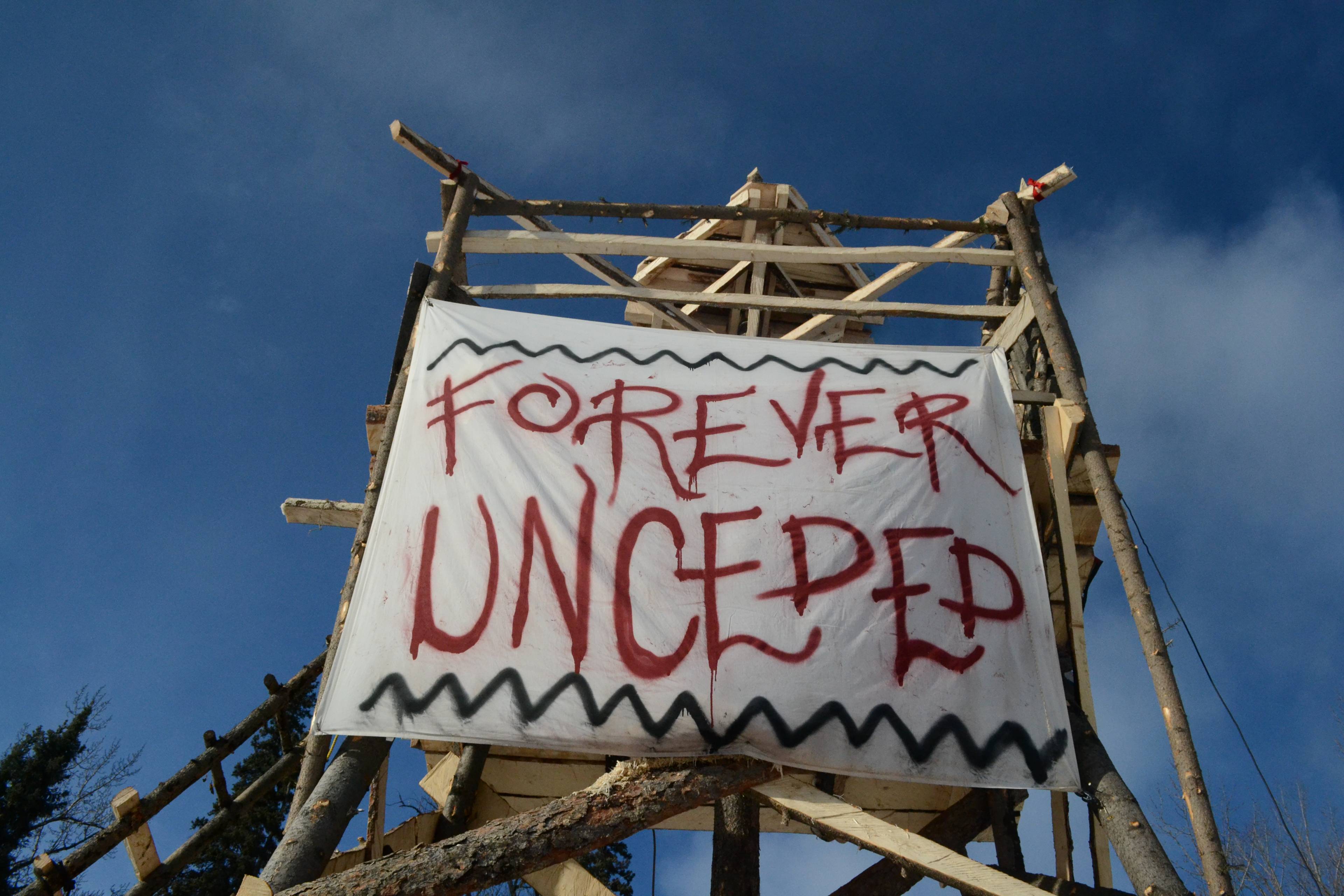 Land defenders awaiting the RCMP sang and drummed as police advanced. Last year 14 people were arrested here in a police raid where, as later detailed by The Guardian, “lethal overwatch” — or a readiness to use lethal force — was authorized. Indigenous people have said they were not surprised by the revelation. 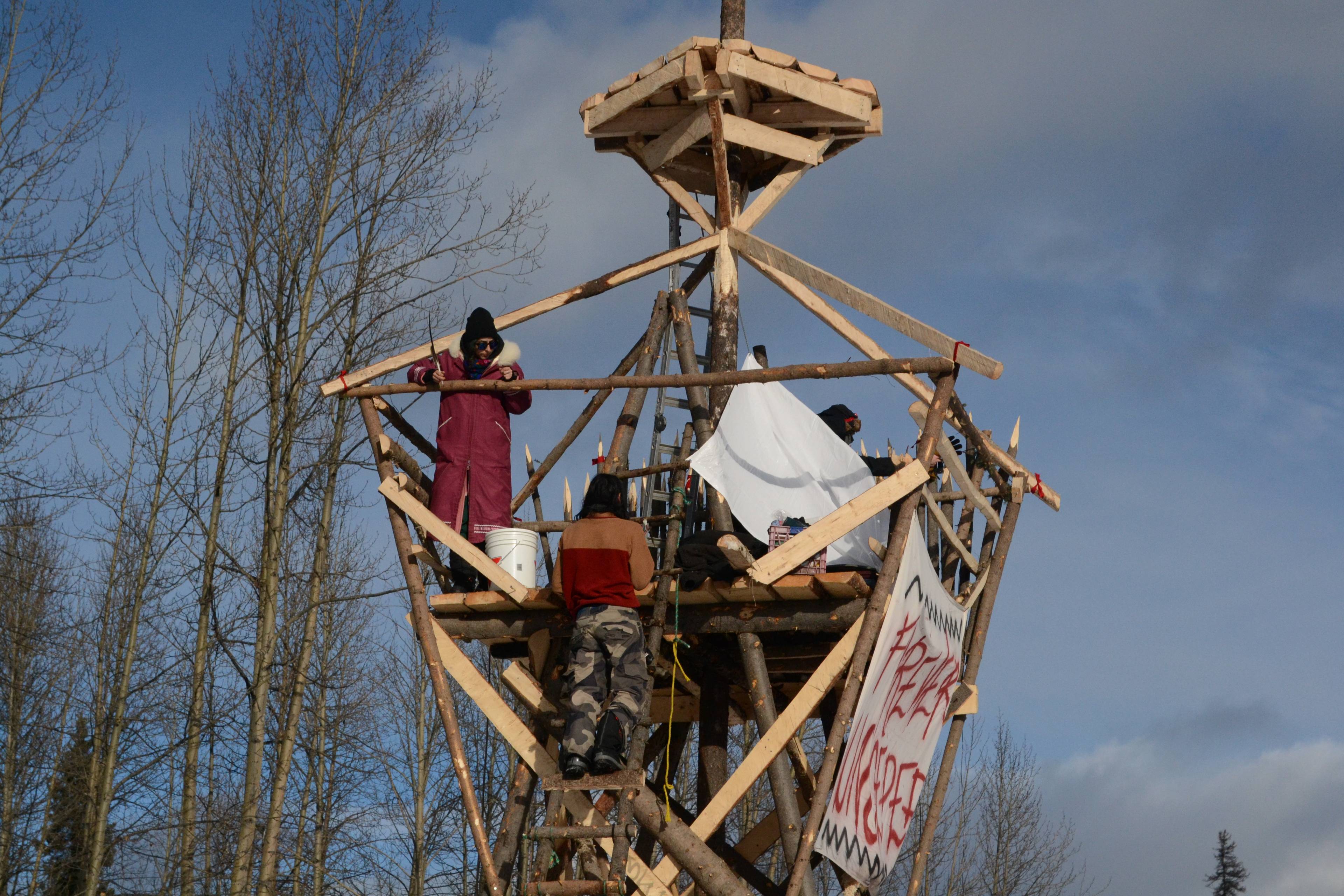 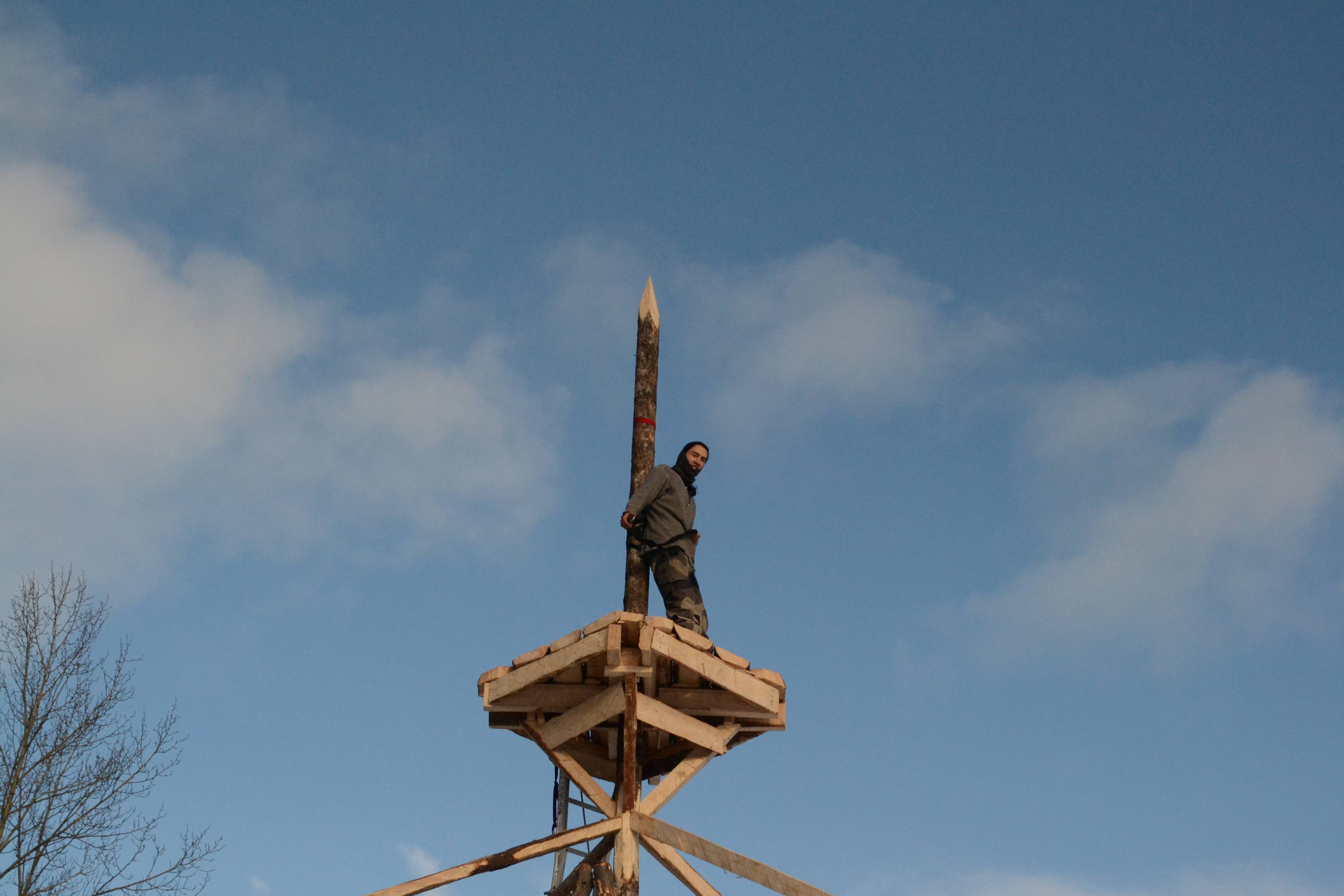 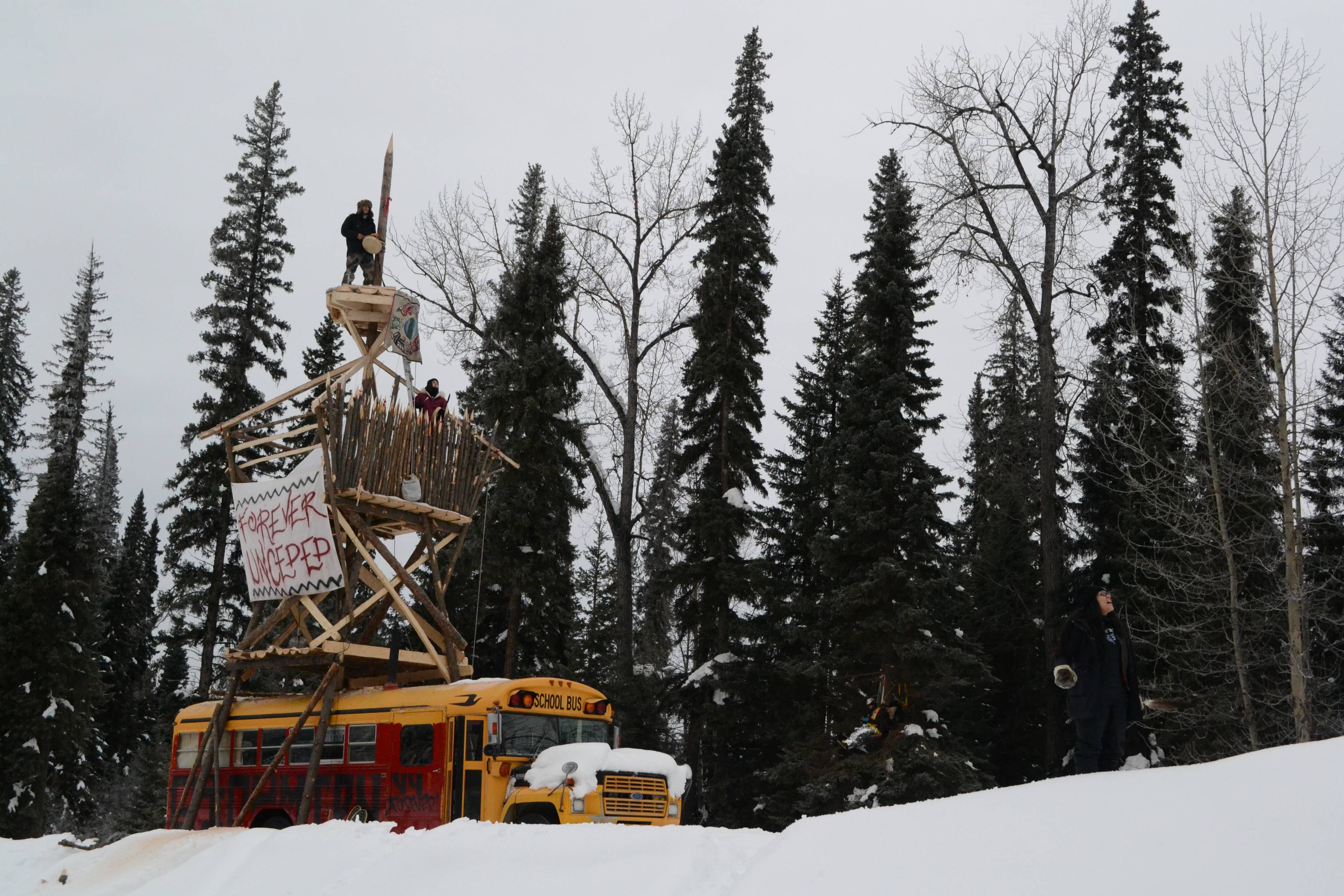 When the RCMP arrived, a sergeant read the injunction from the bridge using a megaphone and instructed people to desist and not block officers. Police action began after the breakdown of what was supposed to be a week-long mediation period involving the province, Wet’suwet’en hereditary chiefs, and Coastal GasLink. The hereditary chiefs reported they were included in only two days of talks. 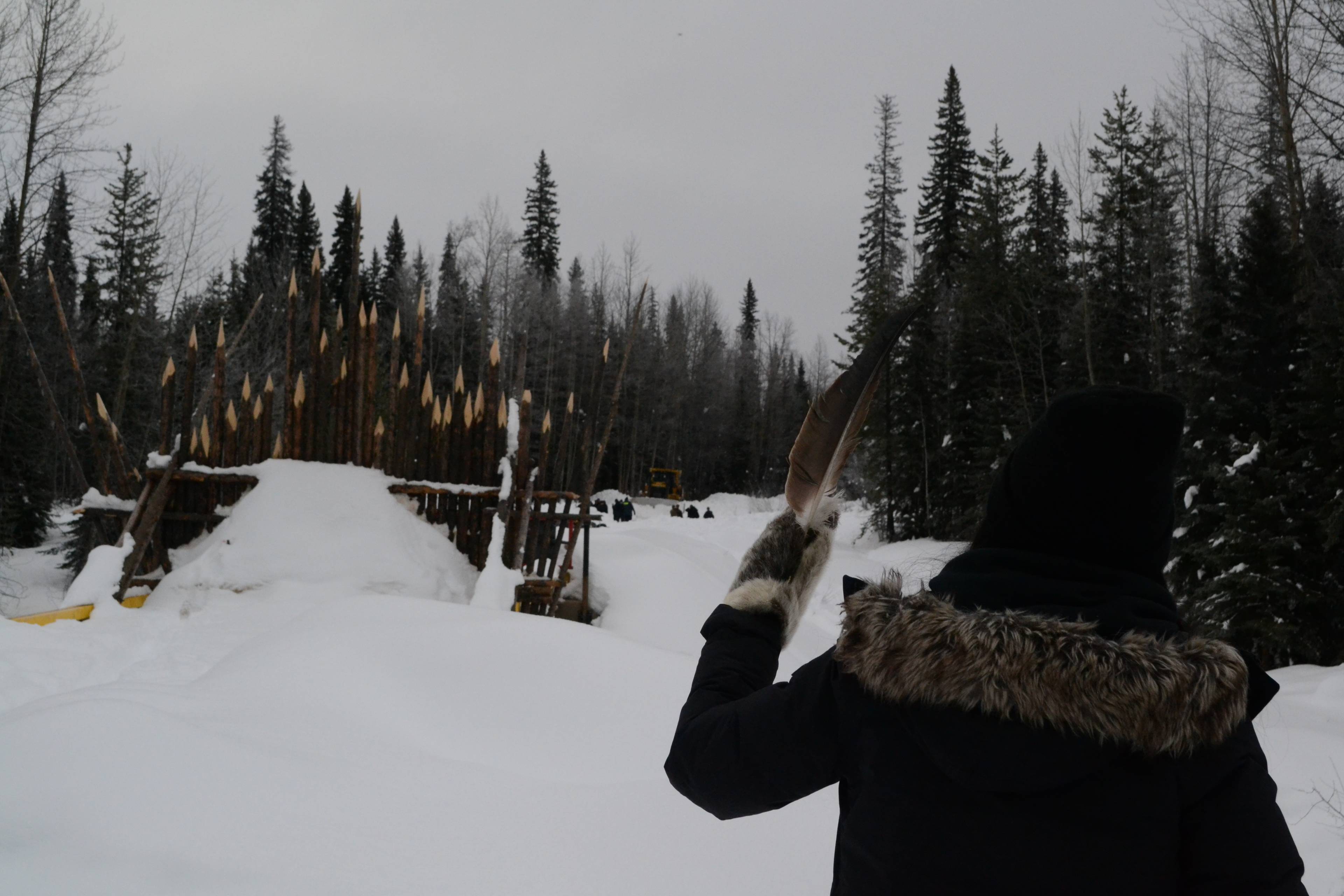 A person acting as a legal observer situated himself in a tree in order to stay above the fray. During the police action, he asked many questions about what was happening and who was doing what. For the most part, he was ignored, he said. 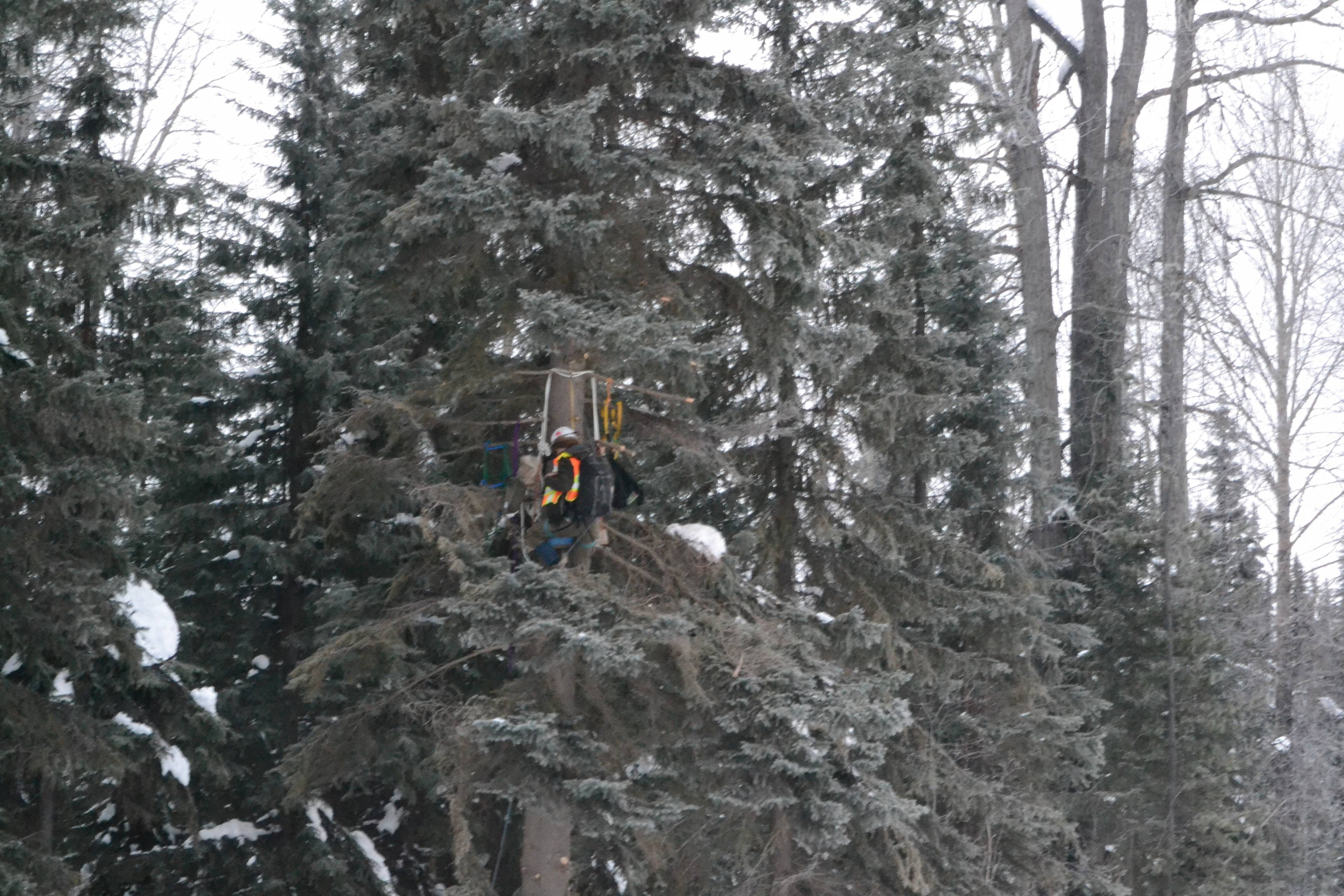 Helicopters were used to drop tactical teams of RCMP officers behind the Gidimt’en gate. Officers were armed with rifles, which they pointed at people, including journalist Jerome Turner. They stopped after he identified himself. 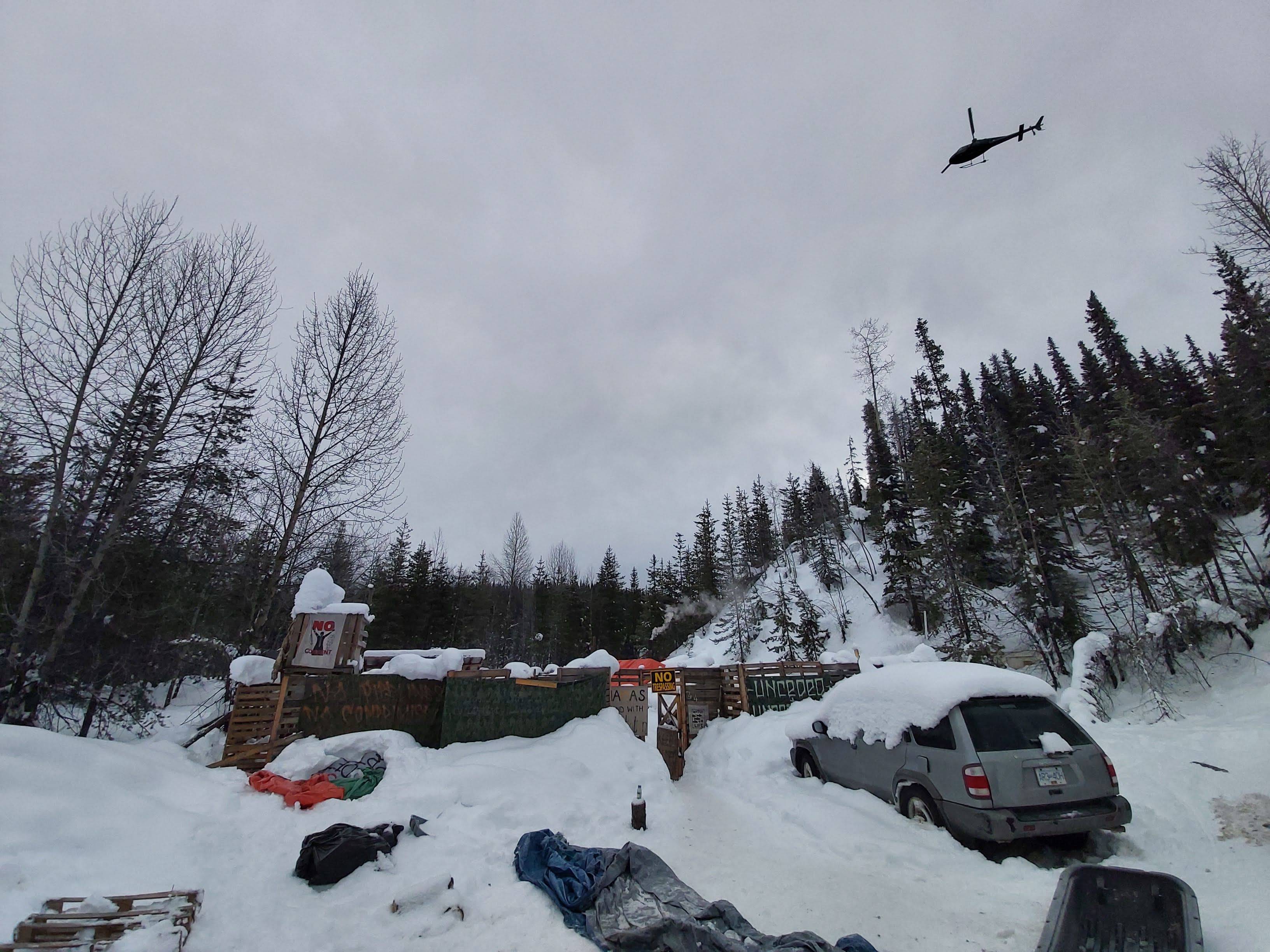 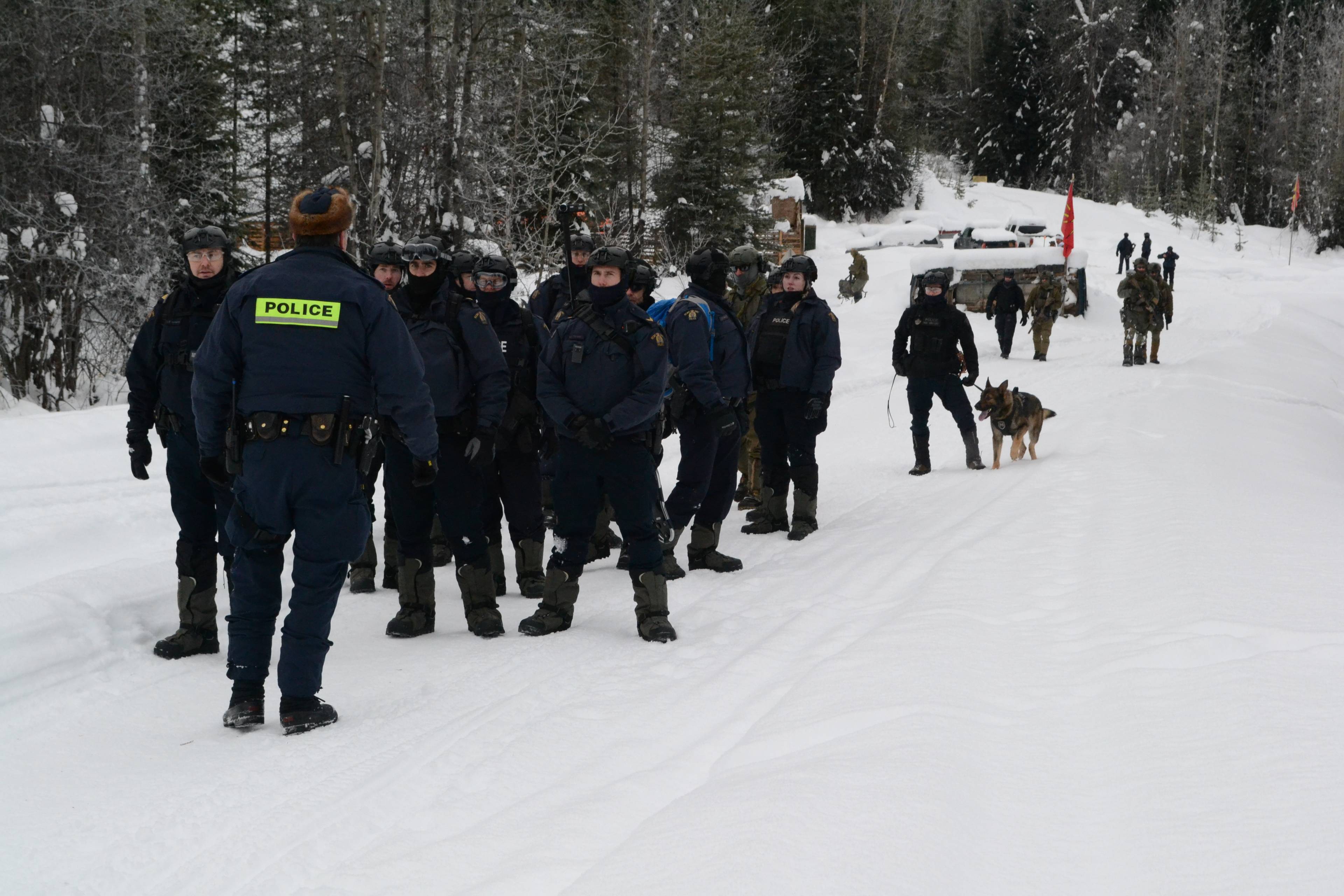 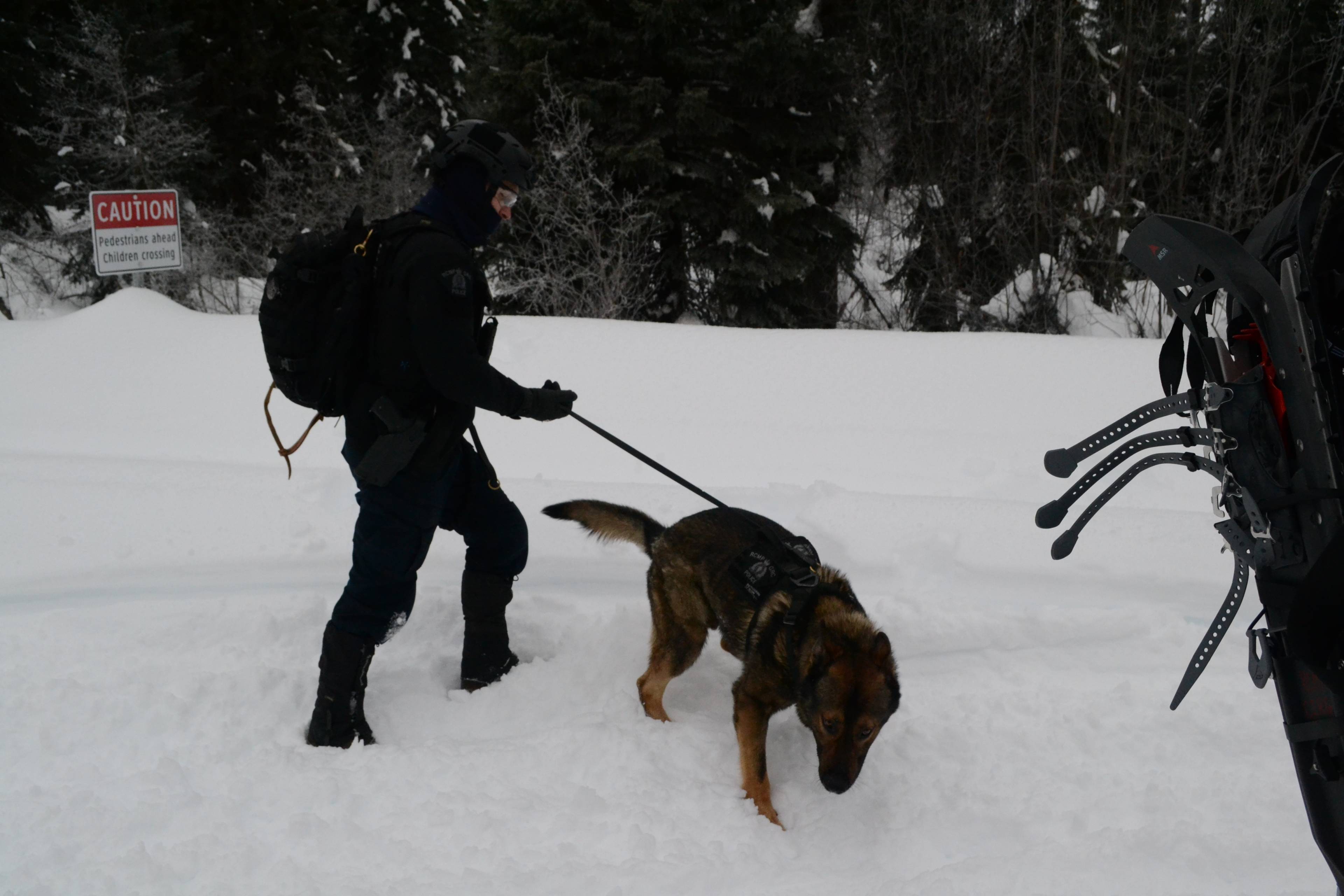 The police also came with snowmobiles. 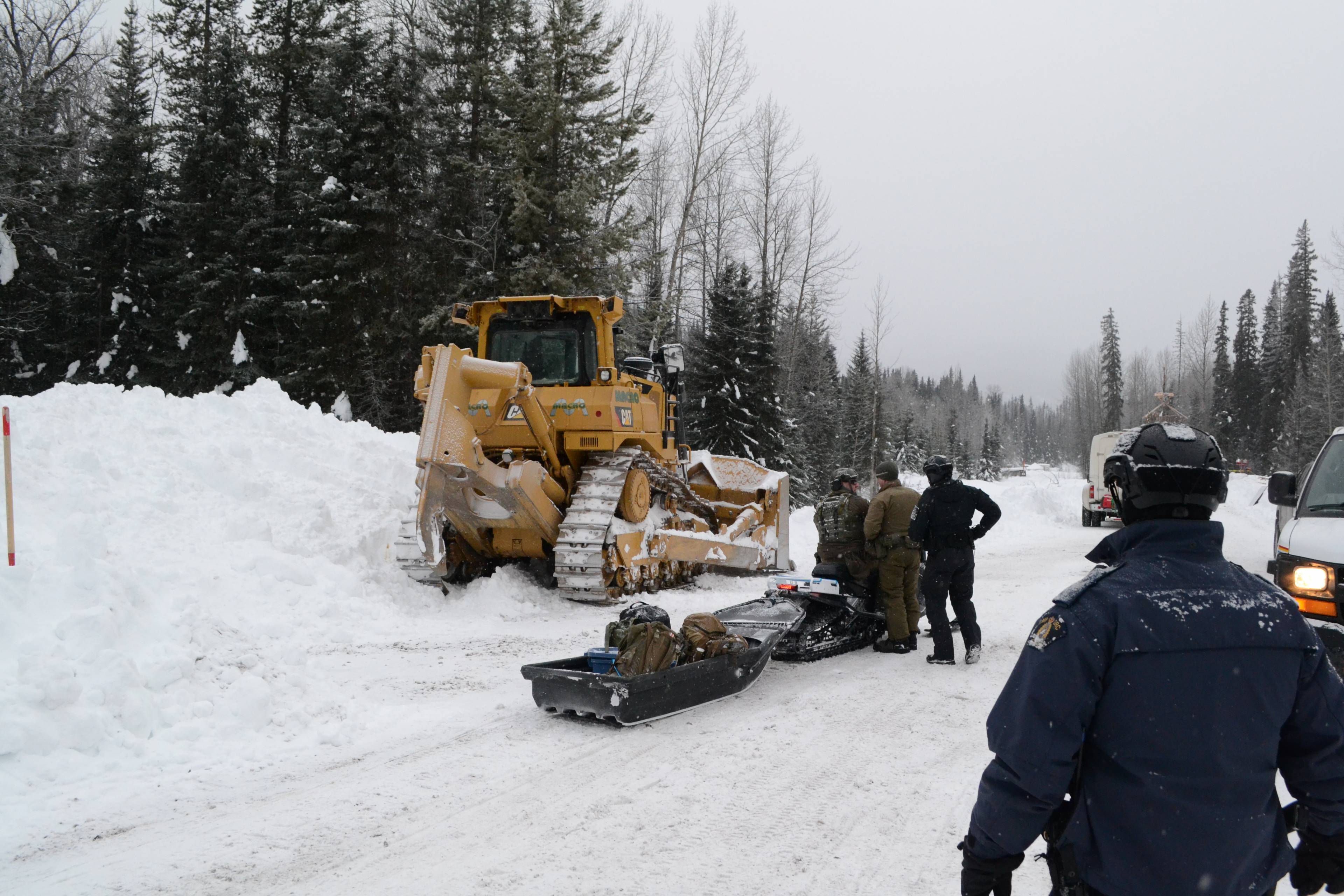 The Division Liaison Team was created “to build relationships with various interest groups and communities so that we may assist in facilitating a safe environment for everyone exercising their charter rights,” according to the RCMP website. 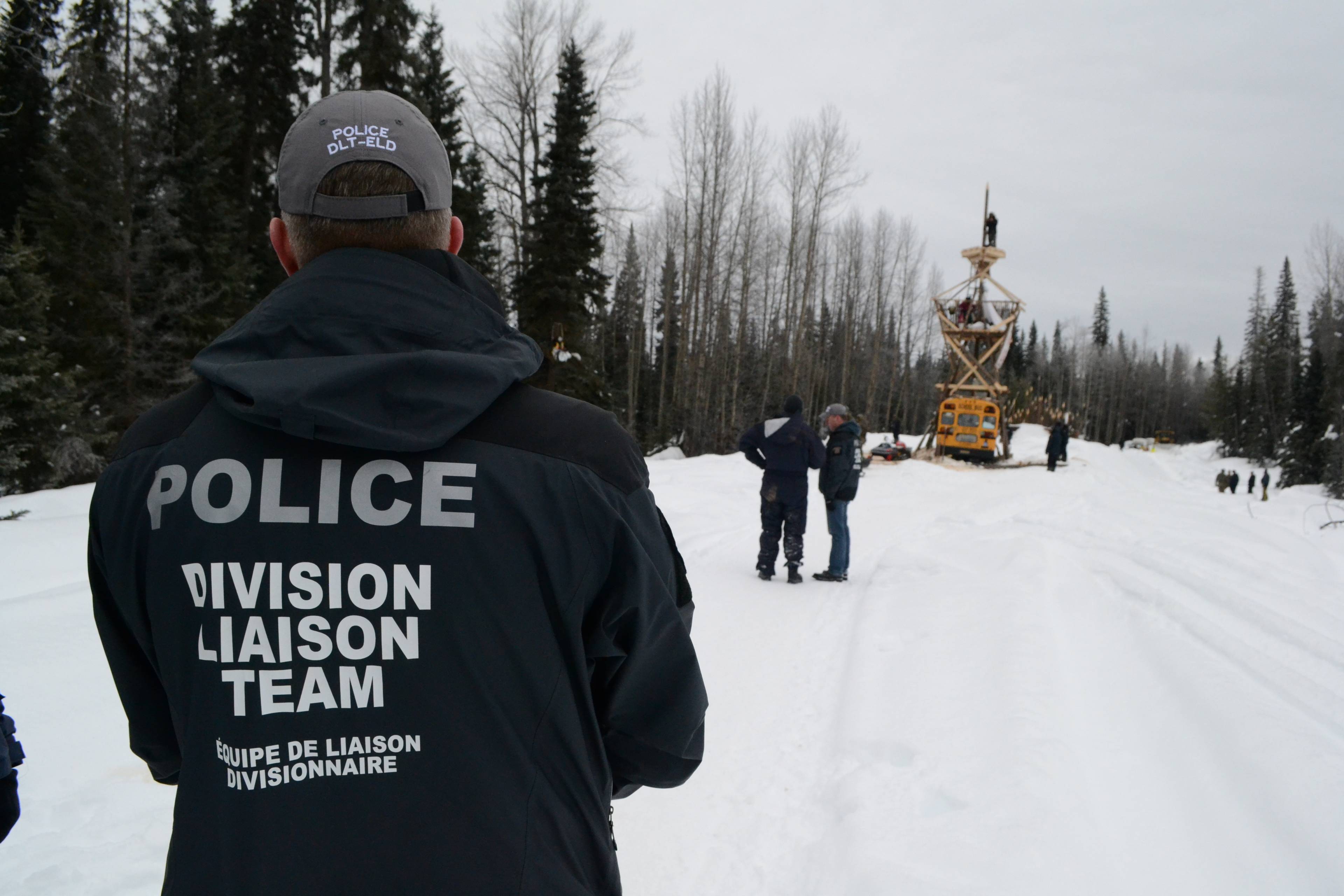 Police used ladders to ascend the tower and harnesses to bring down the two individuals at the top. 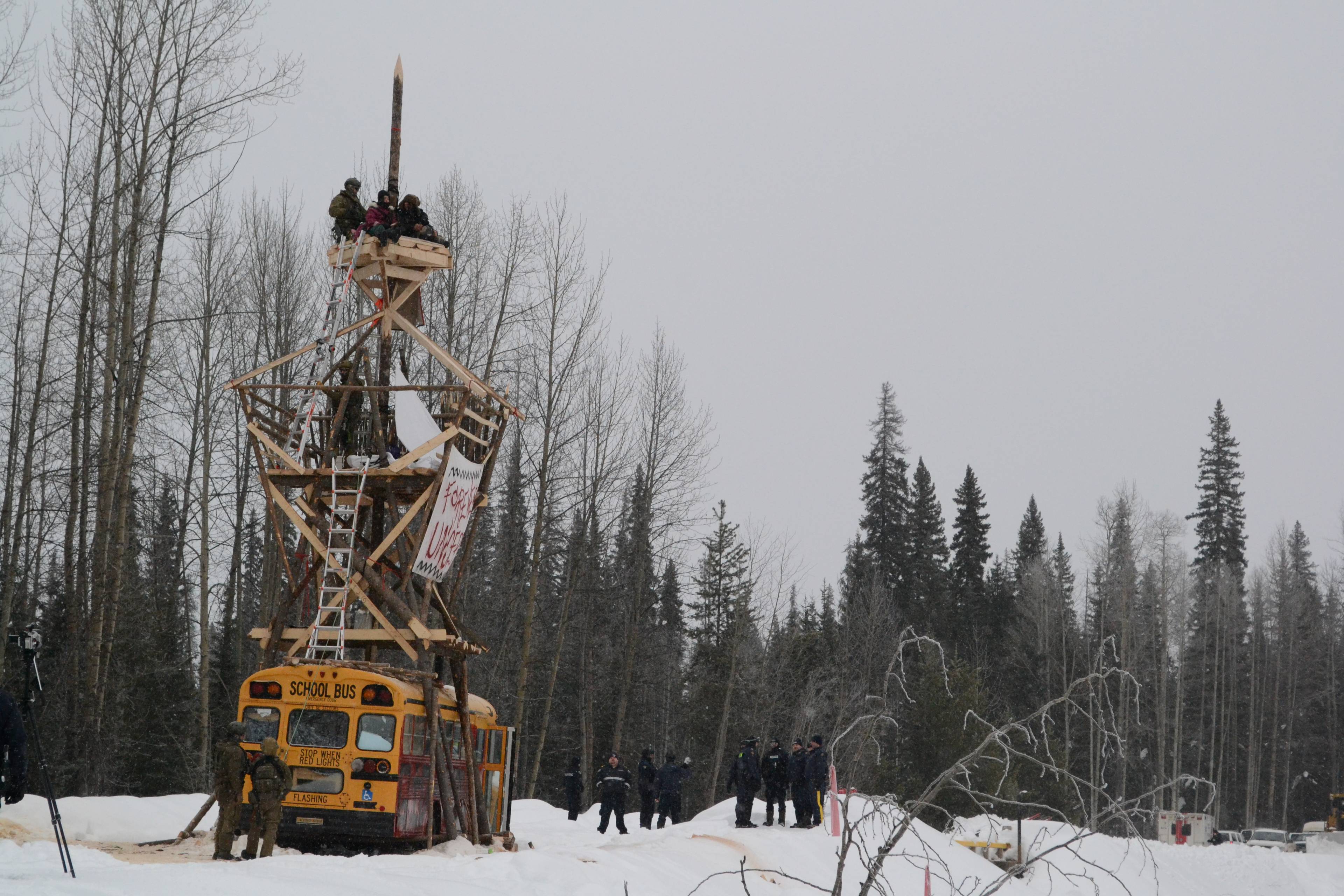 While police removed and arrested the four land defenders in the bus and tower, other officers were attempting to arrest two more people in a cabin belonging to Chief Woos. They were unsuccessful and left without the individuals in the cabin. The cabin was not visible to Ricochet’s journalist from where police had confined him. 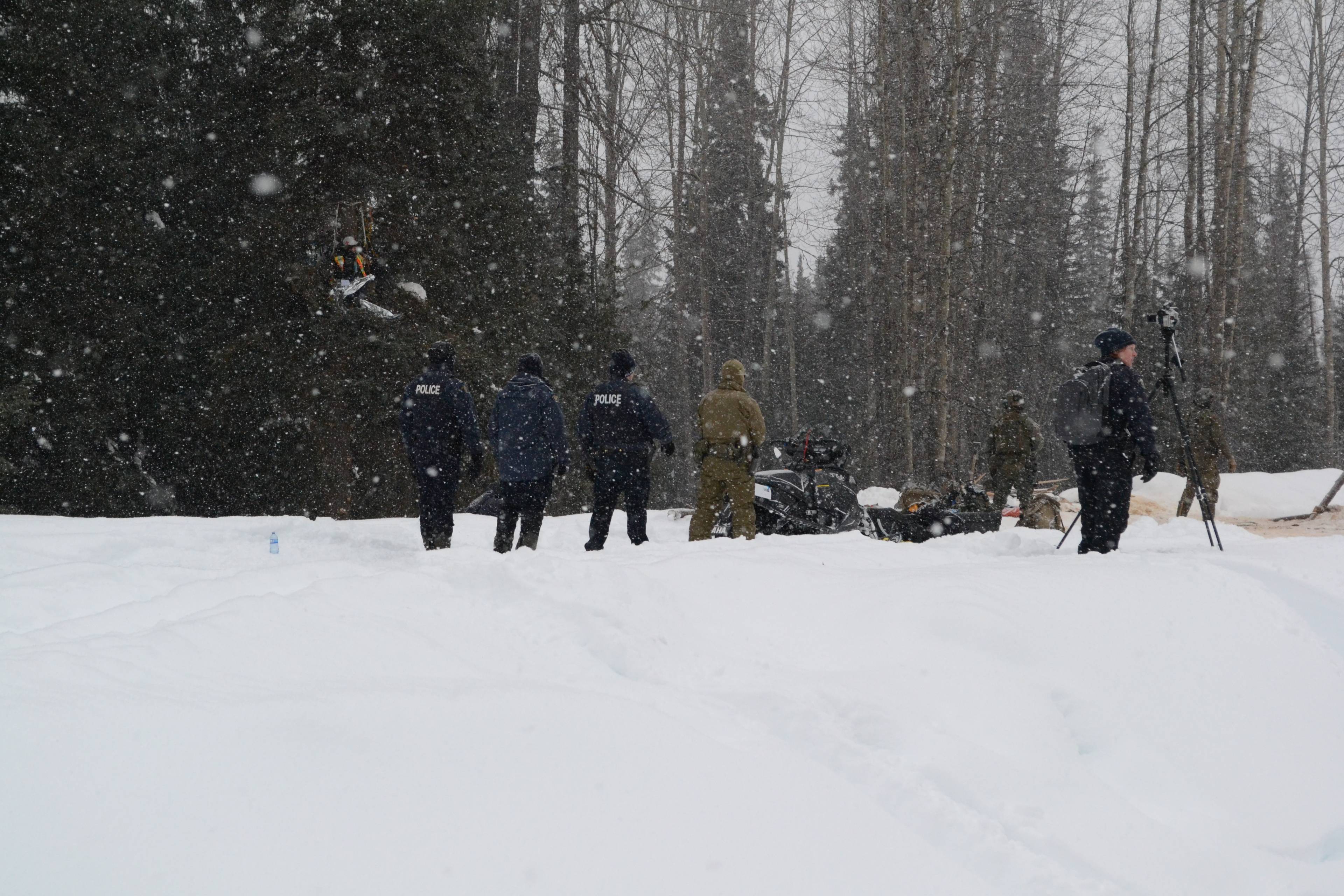 Wickham later called for solidarity actions from people across the country — and they’ve listened. Hereditary chiefs of the neighbouring Gitxsan Nation have led a blockade of the railway at New Hazelton, B.C., and on Saturday hundreds of people in Toronto gathered to shut down the rail for six hours. The Port of Vancouver and Deltaport, which collectively make up Canada’s busiest port, also faced blockades. In Quebec the group Extinction Rebellion occupied the offices of four federal cabinet ministers. 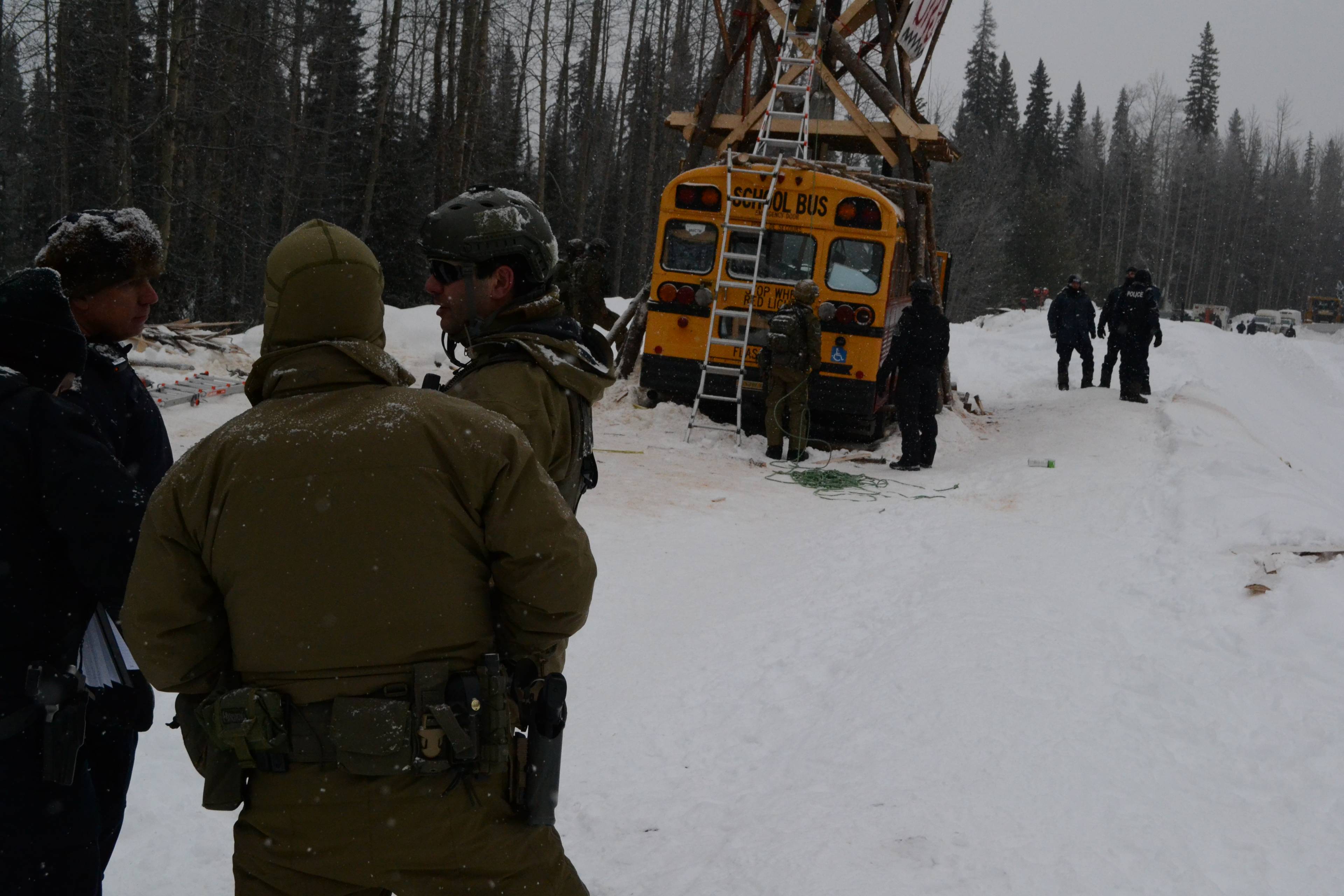 After being detained for hours while reporting on the Feb. 7 arrests at Gidimt’en checkpoint, Turner was prevented from continuing on in the direction of the Unist’ot’en Healing Centre, where other land defenders are located. “As friendly as RCMP were I felt complete immobilized and prevented from being present to do what media are supposed to do,” he later tweeted. 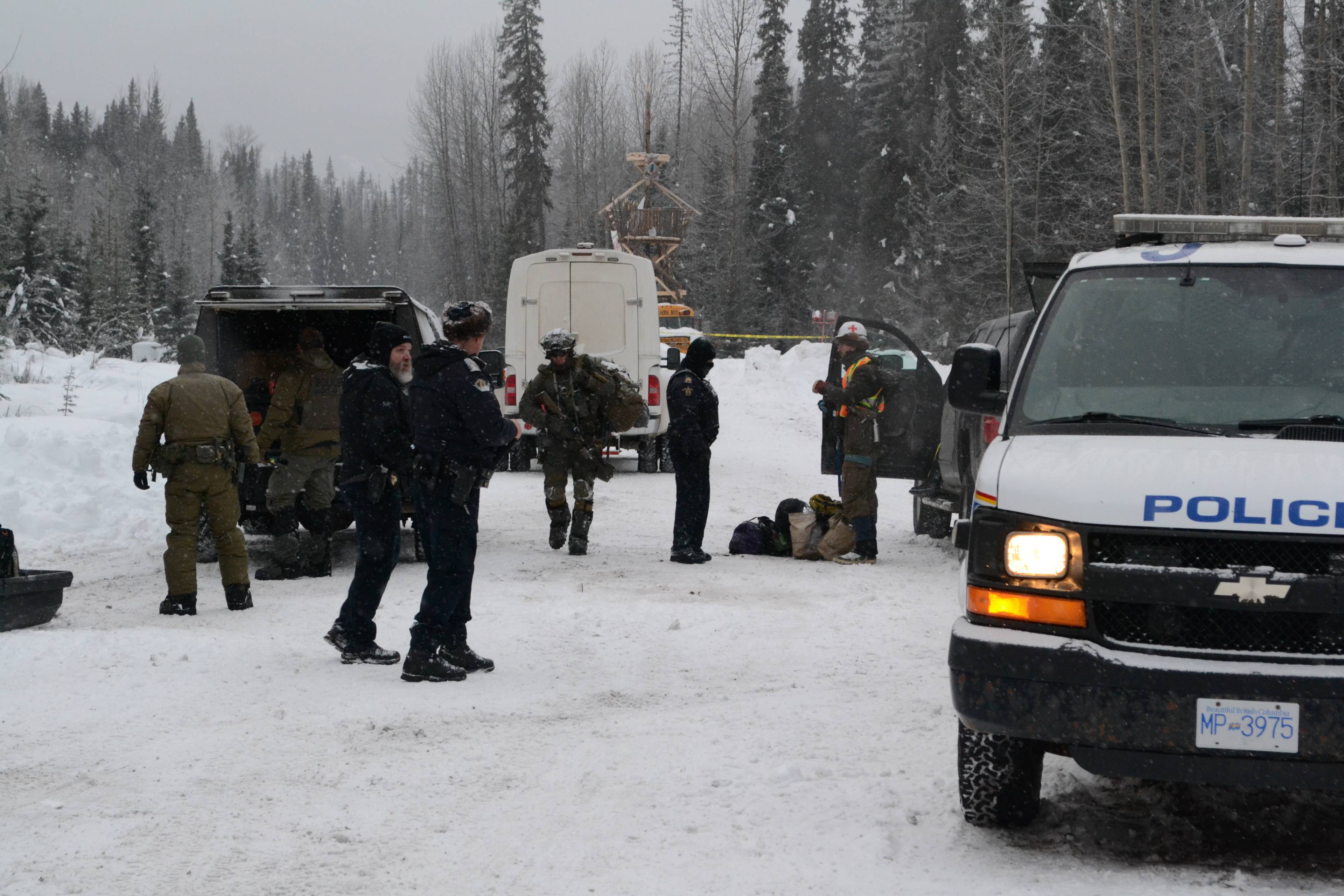