A hundred years ago a Cayuga hereditary chief brought international attention to Canada's disregard for Indigenous sovereignty. Has anything changed since then?

Canada’s latest invasion of Indigenous lands is in full swing.

Police have arrested Kanien’kehá:ka (Mohawk) activists camped out alongside the CN rail tracks on Tyendinaga territory in the wake of Prime Minister Justin Trudeau’s announcement that he was out of “patience” with rail blockades.

This is not the first such incursion.

Indeed, one of the most surprising aspects of the situation is Canada’s almost complete ignorance of a long history of such Indigenous-settler relations.

The Kanien’kehá:ka are part of the Haudenausaunee (Iroquois) Confederacy, made up of the Mohawk, Oneida, Onondaga, Cayuga, Seneca, and Tuscarora, also known as the Six Nations. They’ve always insisted they are allies, not subjects.

In fact, the Mohawks of Tyendinaga, now at the centre of Canadian attention, objected strenuously when Britain transferred authority for relations with their Six Nations allies to the new Dominion of Canada. In a letter to the Governor General in 1891 in which he is addressed as “Brother,” Tyendinaga leaders reminded him that they never consented to be governed by Canada — only to ally with Britain.

Ottawa tried to “destroy all de jure government of the Six Nations.”

The letter evoked treaties between the Six Nations and Britain, “ancient allies” tied together by a Covenant Chain, “a perpetual Covenant of brotherly love and mutual friendship” made first from rope, then iron, and finally silver. It is this chain that the federal minister of Indigenous services, Marc Miller, recalled on his recent visit to Tyendinaga (a promised second visit never took place). The chain, as well as the two-row wampum treaty, meant “the two Governments shall exist and shall not interfere with each other.”

Tyendinaga leaders were “sorely grieved to find ourselves bound by the British North America Act” that created Canada in 1867. They complained that Canada sought “to curtail our treaty rights and to abolish our nationality as a people” and had no right to impose “laws to shackle and heartsore us the Six Nations and other Indians.”

These Tyendinaga views of the relationship with the Crown have not changed over more than a century.

“This is our country. We are sovereign. We’ve taken away our permission to pass trains through our lands,” Mohawk activist tehonikonrathe (Robert Fisher) recently told APTN. 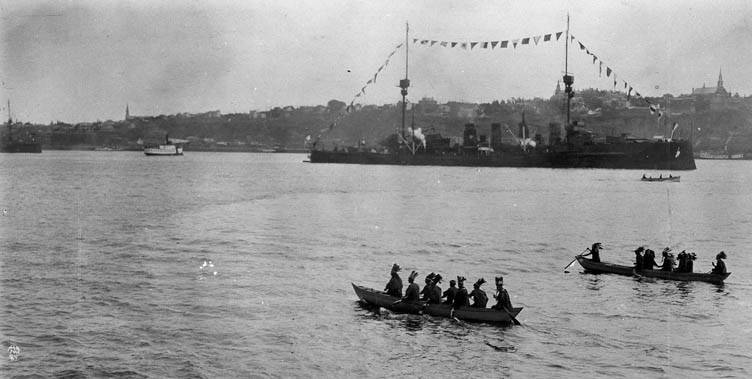 Canada’s relations with Indigenous nations have gained notoriety internationally. The United Nations Committee on the Elimination of Racial Discrimination has criticized Canada for putting natural resources ahead of Indigenous human rights.

The confrontation with Indigenous Peoples and their supporters could even cost Justin Trudeau’s government its bid for a UN Security Council seat. Canada is alone among three candidates in its defiance of requests from UN bodies and its violation of the UN Declaration on the Rights of Indigenous Peoples requirement for “free, prior and informed consent.”

If Canada’s government had any awareness of its own history, it would remember that the “trouble” reaped from a dispute with the Six Nations almost a century ago over very similar issues of contested sovereignty and disputes over whose law should rule.

Key in provoking the conflict was a Canadian government decision in 1920 to force enfranchisement upon Indigenous Peoples, granting the right to vote at the cost of losing Indian status (and thus, for instance, the right to live on reserves).

“The officials wished to treat us as children and use the rod. This trouble has been going from bad to worse because we are not children,” explained Deskaheh.

In order to turn back these encroachments and assert Six Nations sovereignty as an ally rather than a subordinate subject of the Crown, the Six Nations Hereditary Council sent one of its chiefs on a series of missions to Europe in the early 1920s. Levi General, who bore the Cayuga title of Deskaheh, petitioned first the British imperial government and then the League of Nations.

When Deskaheh made the Six Nations case in London, colonial secretary Winston Churchill sent him packing. So Deskaheh appealed to a member of the League, writing in 1922 that “our British neighbours of the Dominion of Canada, planning our extinction as a separate people, undertook … to bring our lands under administration of Canadian laws and policy.” Although the Six Nations had accepted arbitration, he added, Canada had “without notice or declaration on its part … invaded our country with an armed force.”

Deskaheh also served notice to the League in 1923 that “a dispute and disturbance of the peace has arisen” as Ottawa tried to “destroy all de jure government of the Six Nations,” and the RCMP presence on Six Nations land constituted “an act of war.” (This is just one instance of the RCMP being used to suppress Indigenous resistance.)

Duncan Campbell Scott, deputy superintendent-general of Indian affairs, said it was a “childish idea that they are a separate nation.” He insisted that Canada was policing, not “invading.” The local Indian agent, evoking images of “troublesome Indians,” called Deskaheh “the worst of the unruly element.”

This attitude only deteriorated relations further. “The officials wished to treat us as children and use the rod. This trouble has been going from bad to worse because we are not children,” explained Deskaheh.

Deskaheh was able to convince diplomats representing Ireland, Estonia, Panama, and Persia to call on the League to grant him a hearing. British diplomats quickly exerted pressure on behalf of Canada to ensure that the “ridiculous question,” as it was called in a government document, would get no hearing.

What are Canada’s responsibilities in light of treaties it has signed?

“Present attempt to reopen the question is resented as important interference in internal affairs of the British Empire,” the British Foreign Office huffed.

Appealing to notions of what constituted acceptable forms of government, Canada’s response denigrated the Six Nations council as “a primitive matriarchal form of Government.” It followed up with a one-man commission of inquiry that rejected Six Nations traditions such as playing lacrosse on a Sunday in defiance of Ontario law and allowing “a comparatively small number of old women” to select chiefs.

The commission report advocated for replacing the traditional council and implementing “progressive” Canadian values, including a band council elected by men aged over 21. (Women were excluded despite the arrival of women’s suffrage in federal elections in 1917.) Canada’s cabinet endorsed the plan, then sent in the RCMP to evict the Six Nations council and impose a band council under the Indian Act.

The band council was clearly a Canadian creation. As few as 26 men at Six Nations voted, and officials in Indian Affairs refused to even inform Senator Raoul Dandurand, representing Canada at the League of Nations, what the voting numbers were.

From Ottawa’s perspective, the issue was settled.

And yet the same issues lie at the root of today’s conflict between Canada and the traditional councils of the Wet’suwet’en and the Haudenosaunee.

Whose law applies? Who has sovereignty over territories never ceded by treaty? What are Canada’s responsibilities in light of treaties it has signed?

These are tough issues, to be sure. They might be easier to grasp, and perhaps easier to resolve, if Canadian policymakers understood the history of Canadian-Indigenous relations even half as well as Indigenous Peoples do.

As the Mohawk Council of Kahnawà:ke recently stressed, “History reminds us that the proper approach to addressing issues is through dialogue and discussion – not by sending in police.” 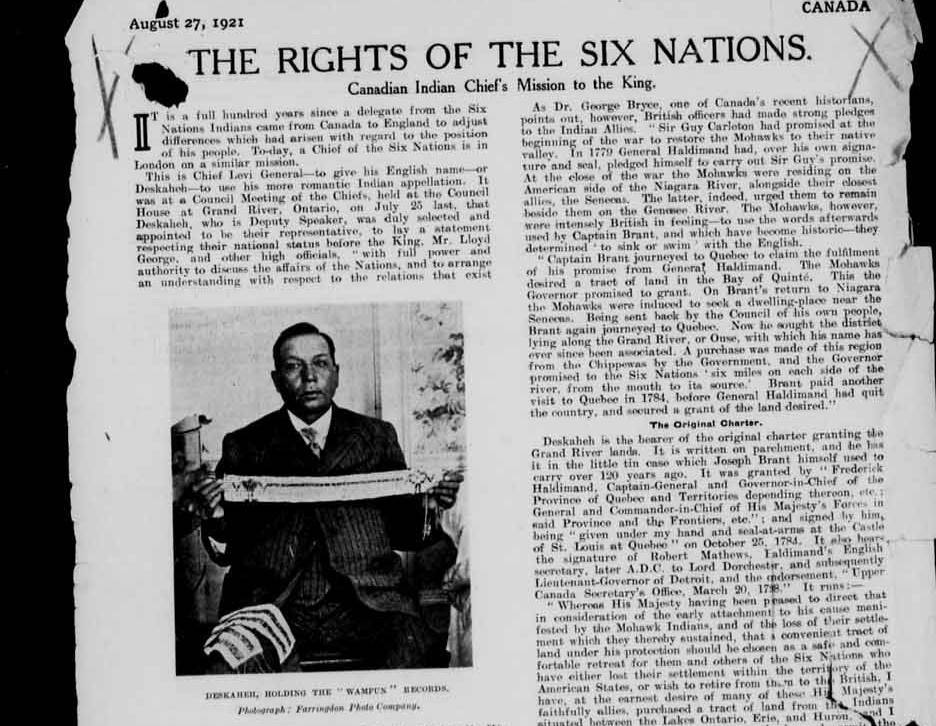 News clipping with Deskaheh holding wampum.
As a top polluter, what is Canada’s responsibility to humanity?
The Dirty Dozen: ‘Carbon bombs’ threaten to blow up Canada’s climate commitments
I was raised in an Indigenous community — but even that doesn’t make me Indigenous