Trish Mills didn’t want to agree to the conditions of the release order — but after about 30 hours in custody she also didn’t want to be remanded and risk being kept behind bars for weeks more.

So she signed the agreement, which severely restricts what she can say and do on social media, despite feeling it was effectively a “state-sanctioned gag order.”

“I’ve juggled a lot of hard feelings around whether abiding by the condition means I’ve lost my integrity,” she says.

Mills was arrested last month in Hamilton, Ontario, for alleged involvement in a railway blockade — one of many that have appeared across the country in support of the Wet’suwet’en hereditary chiefs in the ongoing Coastal GasLink pipeline conflict. She has a court date next week.

Restrictions on free speech have been found justifiable in only the most extreme cases, such as those involving hate speech.

One of the conditions of her release stipulates that she cannot use social media to express solidarity with the Wet’suwet’en.

“You shall not post or otherwise engage with the Facebook Group ‘Wet’Suwet’en Strong: Hamilton in Solidarity’ or any other social media platform which engages for the same purpose or objective,” it states.

The imposition of social media restrictions as a release condition for protestors is highly problematic and infringes on Charter rights, according to Vincent Wong, an adjunct professor and William C. Graham research associate in the International Human Rights Program at the University of Toronto Faculty of Law.

“It seems like this is a clear violation of freedom of expression and opinion by way of criminalizing free speech and in particular political criticisms of the government,” he says, pointing out that the release order targets “speech that goes to the heart of the functioning of a healthy democratic society.”

It also violates freedoms of association and assembly by limiting the communication required to exercise those rights, he says.

The broad language of the condition has left Mills confused about its scope.

It “can be applied in a way that prevents me from engaging with social media in any way that supports or promotes Indigenous rights, sovereignty, front lines, or land defence,” she says. Not only is she refraining from posting content on social media, but she is also wary of sharing or even “liking” posts.

Wong questions the legitimacy of the restriction, given the purpose is unclear and restrictions on free speech have been found justifiable in only the most extreme cases, such as those involving hate speech.

“If the goal is to silence political dissent, that is not legitimate. If the goal is some vague public order concern or that they will influence others to break the law, they still cannot impose prior censorship on individuals.”

The consequences of the release condition may reach far beyond this case to other activists and even media.

It could put “an enormous chilling effect on those who are attending these rail blockades in solidarity,” says Wong, and “indirectly curtail freedom of the press by cutting off the social media and citizenship journalism [necessary] to get crucial information from protests sites to the public and provide important leads for journalists and news outlets to follow up with.”

“The social media ban seems unnecessary and disproportionate to any objective that the government or court might espouse.” 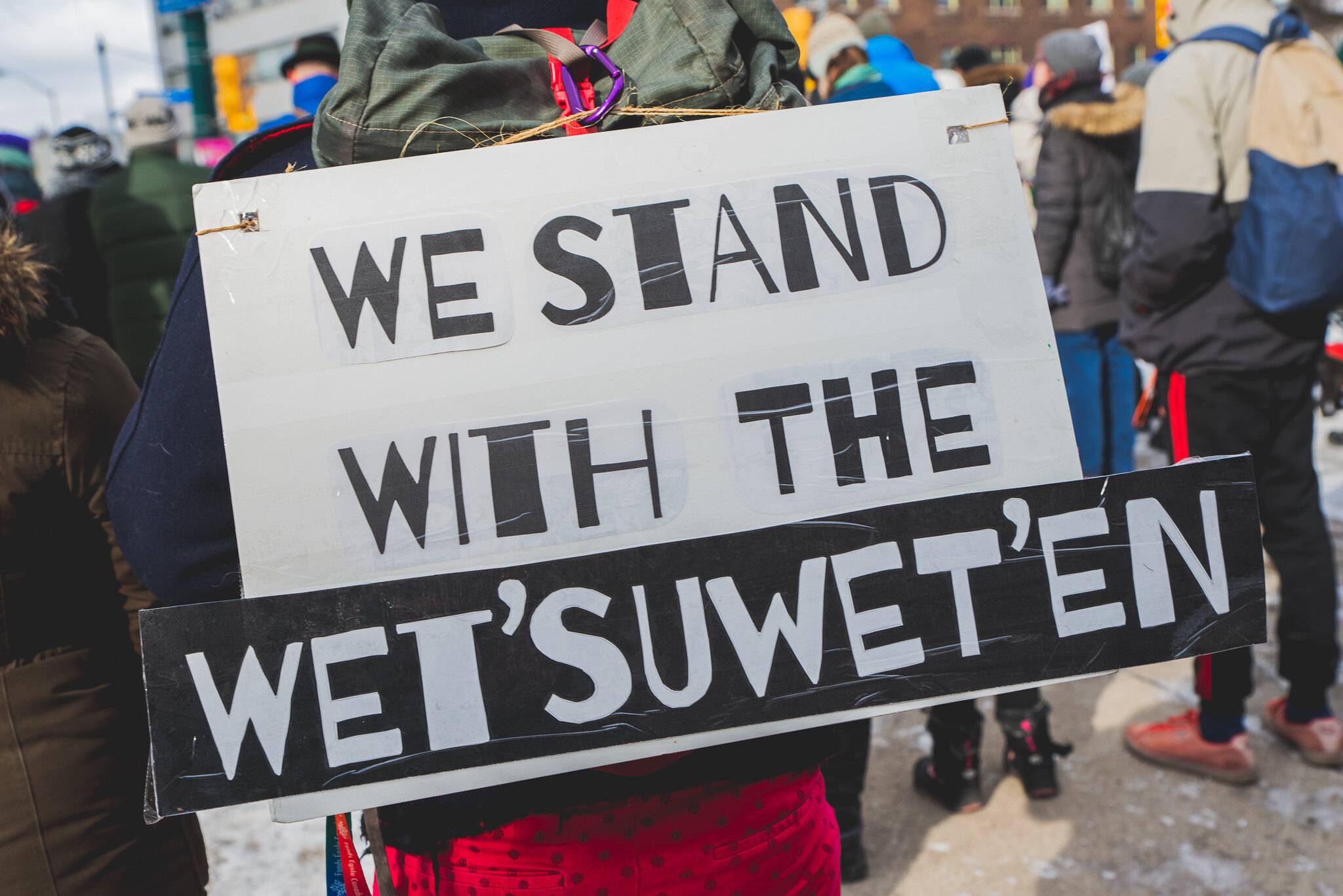 People across the country have shown support for the Wet’suwet’en hereditary chiefs in the Coastal GasLink pipeline conflict. Vaughan, Ontario, Feb. 15, 2020.
Jason Hargrove

A ‘desperate act to quell dissent’

The larger implications of the release order worry Mills too.

Arrests related to solidarity actions and restrictions on freedom of speech are attempts to repress and silence, she says. And while in Hamilton the court has mandated silence on Indigenous issues, in B.C. the court has used injunction proceedings to impose restrictions on land defenders, and Coastal GasLink has “a gag order of sorts for any First Nation band councils signing benefit agreements. Not only are they not allowed to speak ill of the project, they also need to encourage their community not to speak ill of it.”

Before the release order, according to Mills, she had been very vocal in her support of Wet’suwet’en land defenders.

Signing the agreement initially left her feeling angry and disappointed with herself “and others for not really comprehending the psychological impacts of that kind of risk assessment and internal struggle,” she says.

“More recently I’ve started to feel more at ease with my choice. Ultimately I’m determined to find ways to continue this work, to share knowledge or perspective and provide encouragement and support. I’m better equipped to do all of that outside of jail.”

The conflict that triggered country-wide solidarity actions has not been resolved.

Plus, says Mills, there’s actually something inspiring about the release order.

“The state doesn’t often openly sanction broad gag orders,” she says. “We can read this response then as a desperate act to quell dissent, which means in some way we also must be succeeding. They’re afraid of our collective strength and of this movement growing.

“In fact, they named growing support for Indigenous issues and peoples as a primary concern during Idle No More. What we’re doing — targeting state infrastructure to force Canada to be accountable to Indigenous people — is working.

“Will we react to these new developments with fear and allow ourselves to be silenced into complicity — or will we act with collectivized strength, adaptive strategy, and courage to push this to the next level?”

The conflict that triggered country-wide solidarity actions has not been resolved, says Mills. “The Wet’suwet’en still don’t consent to the CGL pipeline. CGL is still actively destroying their territory. Canada has interfered and removed Indigenous people from their own land, with violence.”

“We’re in a moment right now where our actions as individuals and collaborators have the potential to spark positive, irreversible change.”

“Since this isn’t social media, I don’t mind encouraging the choice of collectivized strength and adaptive strategy.”