In the wake of the COVID-19 crisis, thousands of tenants in Toronto and beyond will not be paying rent on April 1.

Many of us simply don’t have the money to pay, while others have decided to keep what we have to secure our basic needs in a time of profound hardship and uncertainty. Our initiative is organized, it has a name and a website (#KeepYourRent, https://keepyourrent.com) and it’s growing by the hour.

The story I’m about to share is for tenants who want to join #KeepYourRent but have concerns about being evicted. It’s a story from 2018 about a successful rent strike that my neighbours and I organized at 1251 King Street West in Parkdale. While a rent strike is different from #KeepYourRent in that it involves keeping rent only until a demand is met (whereas #KeepYourRent is about keeping rent and using it for basic needs), the potential for eviction is common to both and must be dealt with head-on.

So, let me begin.

Between 2015 and 2017 my landlord, Nuspor Investments, oversaw a number of cosmetic renovations to our building in Parkdale. They glitzed the lobby, changed the hallway carpets, and did some landscaping around the front entrance. They then applied for an above guideline rent increase (AGI) to make tenants pay for it all — landlordism 101.

A few of us in the building responded by forming a committee and knocking on our neighbours’ doors to discuss the situation. Everyone we spoke to thought the AGI was unjustified, but most people felt there was nothing we could do to stop it.

We put up posters around the Forest Hill mansion where Nuspor’s owner lives, to expose to his own neighbours to what he was doing.

Right around this time the 2017 MetCap rent strike in Parkdale ended in victory. The timing couldn’t have been better. People in our building began to see things differently: maybe the AGI wasn’t inevitable after all, maybe we could do something about it.

Over the coming weeks we got a petition going. In January 2018 we delivered a demand letter to Nuspor’s head office calling for a withdrawal of the AGI and the completion of much-needed repairs in our units. Uninterested in dialogue, Nuspor ignored our demands and threatened to call the cops if we continued door-knocking in the building — landlordism 102.

Nuspor’s threat backfired. Door-knocking increased. Our weekly lobby meetings swelled in size and our mood grew restive. Since dialogue wasn’t an option, we started talking about withholding our rent until the AGI was withdrawn.

Just as these talks got going, Nuspor provoked us once more. They hired a security guard to patrol our lobby meetings — landlordism 103. That backfired too. People were not intimidated and still came out to the meetings, and the security guard — who had recently immigrated from India and was working two jobs while enrolled in college — ended up supporting us when we told him what was going on. Instead of patrolling our meetings, he took a nice long walk around the building’s perimetre.

Ultimately, 50 people from the building decided not to pay rent on February 1. The rent strike was on.

For the first few days we heard nothing from Nuspor. Then on February 8, everyone on strike received an N4 eviction notice in our mailboxes — landlordism 104. This meant we had 14 days to pay the rent; otherwise, Nuspor could apply to the Landlord and Tenant Board to evict us. The stakes were as high as they could get.

Back at our building the vote was an overwhelming no.

Over the next couple lobby meetings, we discussed the pros and cons of staying on strike past the 14-day deadline. The obvious con was that we might be evicted. But we also learned we couldn’t be evicted without a hearing at the Landlord and Tenant Board, which would take months to schedule and which might get messy with 50 tenants and a whole lot of supporters from Parkdale in attendance, never mind the media. The upside of staying on strike was equally obvious: Nuspor would face ongoing pressure to withdraw the AGI, and they would be forced to recognize that the threat of eviction wasn’t going to deter us.

The next few weeks went by quickly. On March 1, a few more of our neighbours joined the strike. Then, with the help of Parkdale Organize, a group that focuses on working-class organizing in the area, we put up posters around the Forest Hill mansion where Nuspor’s owner lives, to expose to his own neighbours to what he was doing to people in Parkdale. 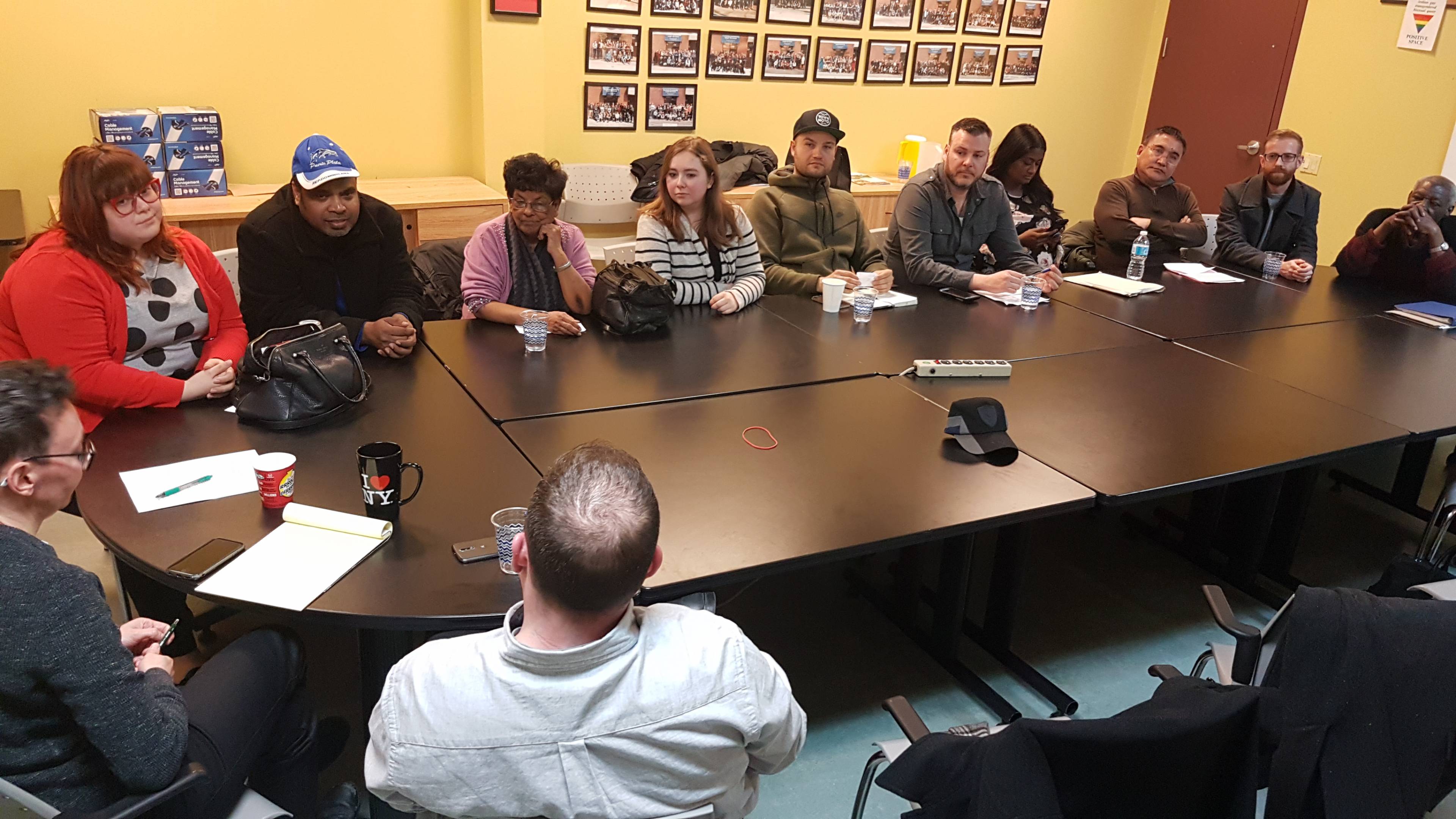 A meeting of tenants at 1251 King Street West in 2018.
Provided by Parmbir Gill.

Back at our building the vote was an overwhelming no. We conveyed that to Nuspor and renewed our demand that the AGI be withdrawn. At first they refused, then they tried to go around us by delivering letters to each tenant in the building promoting the “reasonableness” of their offer and inviting individual settlements on that basis. The letters were a waste of paper. Nobody responded. After more than two months on strike, we weren’t going to be divided now.

Having played their final card, Nuspor folded. They withdrew the AGI entirely — landlordism 107 in Parkdale.

The power of landlords to evict us for non-payment of rent is never absolute.

By coincidence, we got this news the day before a rally that had been organized by local elementary school teachers to support our strike. Rather than cancel the rally, we turned it into a celebration of our victory. Gotta love the teachers.

Not surprisingly, Nuspor didn’t take well to defeat. Just weeks after withdrawing the AGI, they applied to evict two members of our building committee, one of whom was pregnant, for alleged harassment. This was retaliation plain and simple and everyone knew it. We called on Nuspor to drop the eviction. They pressed ahead with it.

The matter ultimately proceeded to a hearing at the Landlord and Tenant Board, where the adjudicator dismissed Nuspor’s case out of hand without even hearing evidence from our side. Legal wins are rarely so resounding.

That, in short, is the story of the 1251 King Street West rent strike.

If there is one thing I think our experience offers for those considering joining #KeepYourRent, it’s that the power of landlords to evict us for non-payment of rent is never absolute. It’s contingent. It depends on the power we create by organizing ourselves, and on how things play out when landlord power and tenant power collide at critical moments in the months that follow.

No one can guarantee the outcome, but through #KeepYourRent we can at least participate in shaping it.

At 1251 King, 50 tenants on a sustained rent strike was enough to neutralize our landlord’s power to evict us. They blinked, and we never looked back. I don’t know what it will take for us to succeed with #KeepYourRent, but large numbers of tenants with the capacity and commitment to resist eviction will be important.

If we can build that up, there’s no telling what we might win.

Parmbir Gill is a tenant in the Parkdale neighbourhood of Toronto and a member of Parkdale Organize.