Coastal GasLink pipeline construction continues during pandemic — and so does resistance

Online discussion panels, Zoom chats, window banners, art contests on social media — environmental and Indigenous rights activists across the world are finding creative ways to voice their solidarity with the Wet’suwet’en Nation as TC Energy presses ahead with construction on a contested pipeline in northwestern B.C.

“While we encourage everyone to take precautions and care for one another during these unsettling times, we also urge everyone to continue fighting and organizing to support our loved ones and communities on the frontlines,” reads one Instagram post in support of the Wet’suwet’en.

“In the midst of this situation, those on the frontlines continue to face immense risk and repression, especially now under cover of disaster.”

As the COVID-19 pandemic unfolds, the protests, occupations and railway blockades that shook Canada earlier this year have come to a halt — but the long-simmering conflict between the fossil fuel industry and Indigenous Nations asserting rights to their land continues.

“It’s a time for us to reflect on how to stay mobilized and make plans,” said Marlene Hale, a Wet’suwet’en woman who has played a key role in organizing opposition to the pipeline in Montreal. She speaks on the phone almost every day with her relatives on Wet’suwet’en territory.

“It’s outrageous to see how governments and corporations are taking advantage of this crisis in order to push forward pipelines and extractive industries.”

The Coastal GasLink pipeline is set to carry gas from the Dawson Creek area in northeast B.C. to LNG Canada’s plant in Kitimat, where it will then be exported to Asian markets. TC Energy — the company behind the $6.6-billion pipeline project — emphasizes that it has signed agreements with 20 elected First Nations band councils, but their jurisdiction covers reserve land only.

The Wet’suwet’en hereditary chiefs, title holders to 22,000 square kilometres of traditional territory that the pipeline route cuts straight through, have not consented to the project.

The B.C. Supreme Court granted an injunction to Coastal GasLink in late December 2019, but far from resolving opposition to the pipeline, it sparked a massive solidarity movement in support of the Wet’suwet’en.

“Corporate exceptionalism cannot become a pandemic response strategy for the governments of B.C. and Canada.”

As the RCMP laid siege to Wet’suwet’en territory and arrested 28 people in February to clear the way for pipeline workers, railway, port, and highway blockades sprang up across the country. In Victoria, B.C., hundreds of people blocked the legislature.

Lockdowns and physical distancing caused disruptions, but then “the activism, mutual aid and support picked up again,” according to Hale. In order to maintain ties across communities and strengthen the relationships built through solidarity over the last few months, she holds online meetings every Friday with Indigenous youth and climate activists in Montreal.

Solidarity persists across borders too. The Indigenous Kinship Collective, based in New York, holds a weekly online rendezvous called “Wednesday’s for Wet’suwet’en.”

While quarantine efforts have spread widely in the past weeks, transient workers continue to pass through Wet’suwet’en territory, posing a dangerous health risk to local communities, both Indigenous and non-Indigenous.

“Now the Coastal GasLink workers and RCMP are literally laughing at us, and taunting us saying that while two months ago we shut down Canada, now we are the ones who are shut in our homes,” Hale said.

Full steam ahead for Coastal GasLink

B.C. recently extended its state of emergency for the third time and non-essential businesses remain closed, but pipeline construction — classified as an essential service by the provincial government — is allowed to continue.

Corporations are taking advantage of the de facto ban on political mobilization due to COVID-19 to push projects through.

Freda Huson, also known as Chief Howihkat, expressed concern for her Wet’suwet’en community during a webinar on Indigenous women’s resistance to fossil fuels held on April 14. She was among those arrested by the RCMP in February.

“Ever since January we have been dealing with legal issues, and when COVID-19 hit, everyone was required to be put into isolation, and yet Coastal GasLink is still going full swing,” she pointed out. “The motels are full in Houston and Smithers. They seemed to have speed-tracked instead of slowed down.”

Though Coastal GasLink has reduced the number of on-site workers, these workers remain in close proximity — for example, while travelling together in vehicles — raising fears of a viral outbreak. For some Indigenous people, this recalls the darkest episodes of North America’s violent colonial legacy, including the 1837–38 smallpox epidemic caused by infected blankets that white settlers gave to unsuspecting Native Americans. This poisonous gift nearly wiped out three tribes along the Missouri River.

“Our elders are the most vulnerable and they are our knowledge keepers. If they start getting contaminated, we risk losing invaluable cultural heritage,” stressed Huson.

This anxiety is shared by Makwala Smith, Kwakwaka’wakw, who took part in the legislature protests in Victoria.

“If our isolated communities start getting infected by the virus because of the coming and going of police and CGL workers, this would mean the continuation of the cultural genocide brought upon by racist attitudes and decades of colonialist policies that have been imposed on our people.”

On March 30, the Union of B.C. Indian Chiefs published an open letter to the federal and provincial governments demanding the suspension of construction work on the pipeline during the pandemic. Questioning the classification of pipeline construction as an “essential service,” they pointed out that Northern Health officials had already warned that primary care resources in the area were at capacity and could come under pressure from Coastal GasLink workers who fell ill.

“Corporate exceptionalism cannot become a pandemic response strategy for the governments of B.C. and Canada,” stressed Indigenous leaders in the letter. 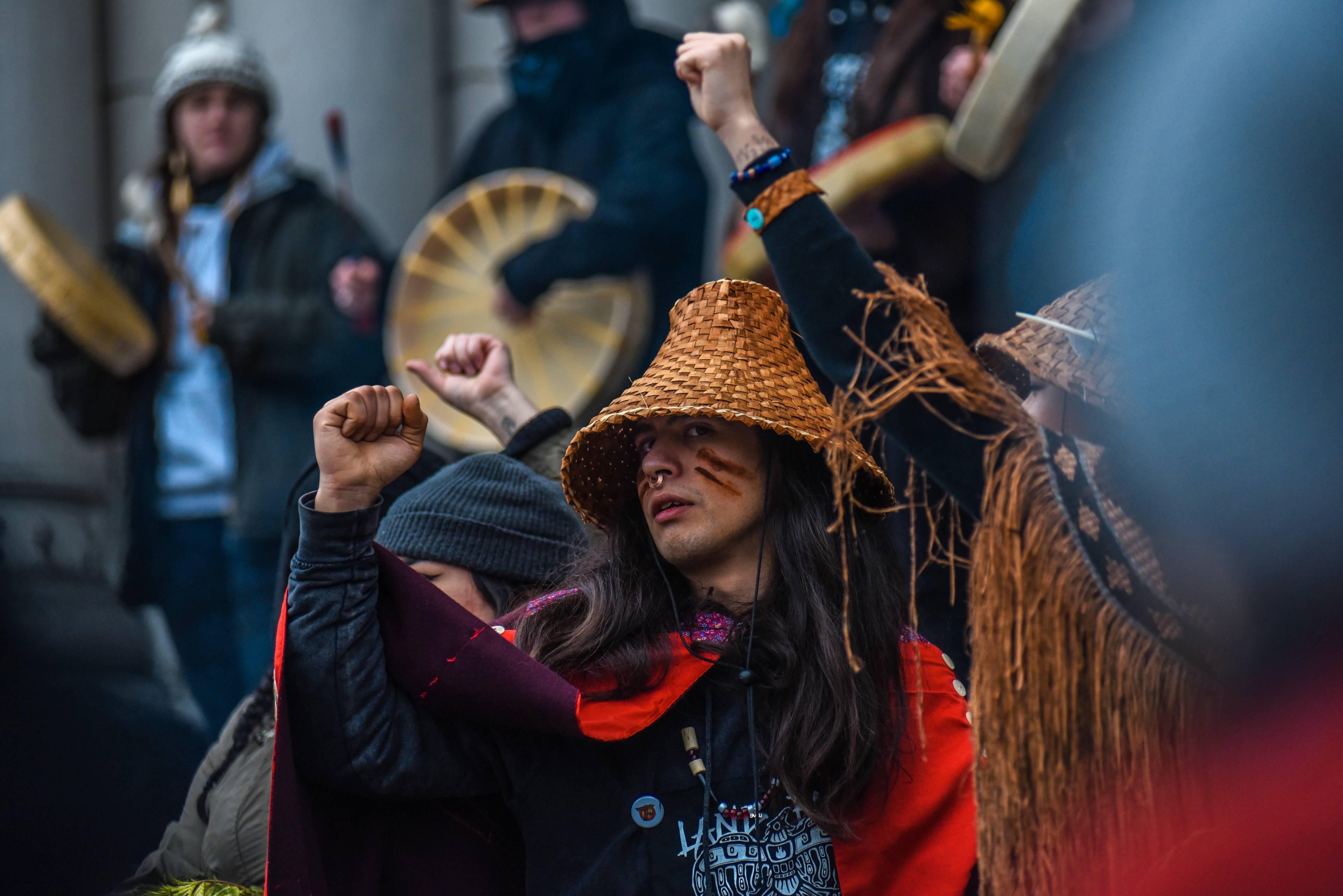 Rights and title agreement does not address pipeline

In addition to the increased health risk the pipeline imposes on local communities and health facilities, it presents a daily assault on Indigenous autonomy and rights, according to Mohawk policy analyst Russell Diabo.

A landmark 1997 Supreme Court of Canada decision known as Delgamuukw recognized the Wet’suwet’en hereditary chiefs as the governing body when it comes to their traditional lands.

Yet “the provincial and federal governments completely ignored the hereditary chiefs. In order to get consent for the pipeline, they went and consulted the band councils, who, according to the Delgamuukw case, don’t have authority off-reserve,” Diabo explained.

“Certain band council members who endorsed the pipeline have economic ties to the project and are not Wet’suwet’en. Some of them have even created coalitions and are part of a campaign to discredit the Wet’suwet’en hereditary chiefs, who are strongly opposed to the CGL pipeline crossing their territory.”

Shortly before COVID-19 brought normal life to a standstill, the provincial and federal governments had finally sat down with the hereditary chiefs. The economic pressure exerted by the blockades, headlines splashed across the globe, and increasing disapproval of the project among Canadians made the situation harder to ignore.

“Free and informed prior consent cannot be achieved at gunpoint.”

A memorandum of understanding was drafted by the three governments — Wet’suwet’en, provincial, and federal — on February 29, reportedly picking up where the Delgamuukw case left off in order to affirm and respect Wet’suwet’en land rights. After a pause in the negotiation process due to COVID-19, on April 30 the Wet’suwet’en hereditary chiefs announced they would endorse the proposed deal on rights and title, after their clans decided to back it. According to a joint statement released by all three governments, they will sign the MOU on May 14, 2020.

But the MOU, which has yet to be disclosed to the public, does not address or resolve the dispute over the pipeline. It is expected that the deal will recognize the authority of the hereditary chiefs, even as governments decline to revisit the questionable approval process for this and other projects.

“Along with thousands of our supporters across Turtle Island, we hoped that these discussions could end the conflict on the ground in Wet’suwet’en territory,” reads an April 27th post on the Facebook page for Gidimt’en checkpoint. “Although this is a step in the right direction, CGL continues to trespass on Wet’suwet’en territory in direct violation of the eviction order enforced by the Hereditary Chiefs on January 4th, 2020.”

Gidimt’en is one of the five clans of the Wet’suwet’en Nation. RCMP arrested four people at Gidimt’en checkpoint in February. 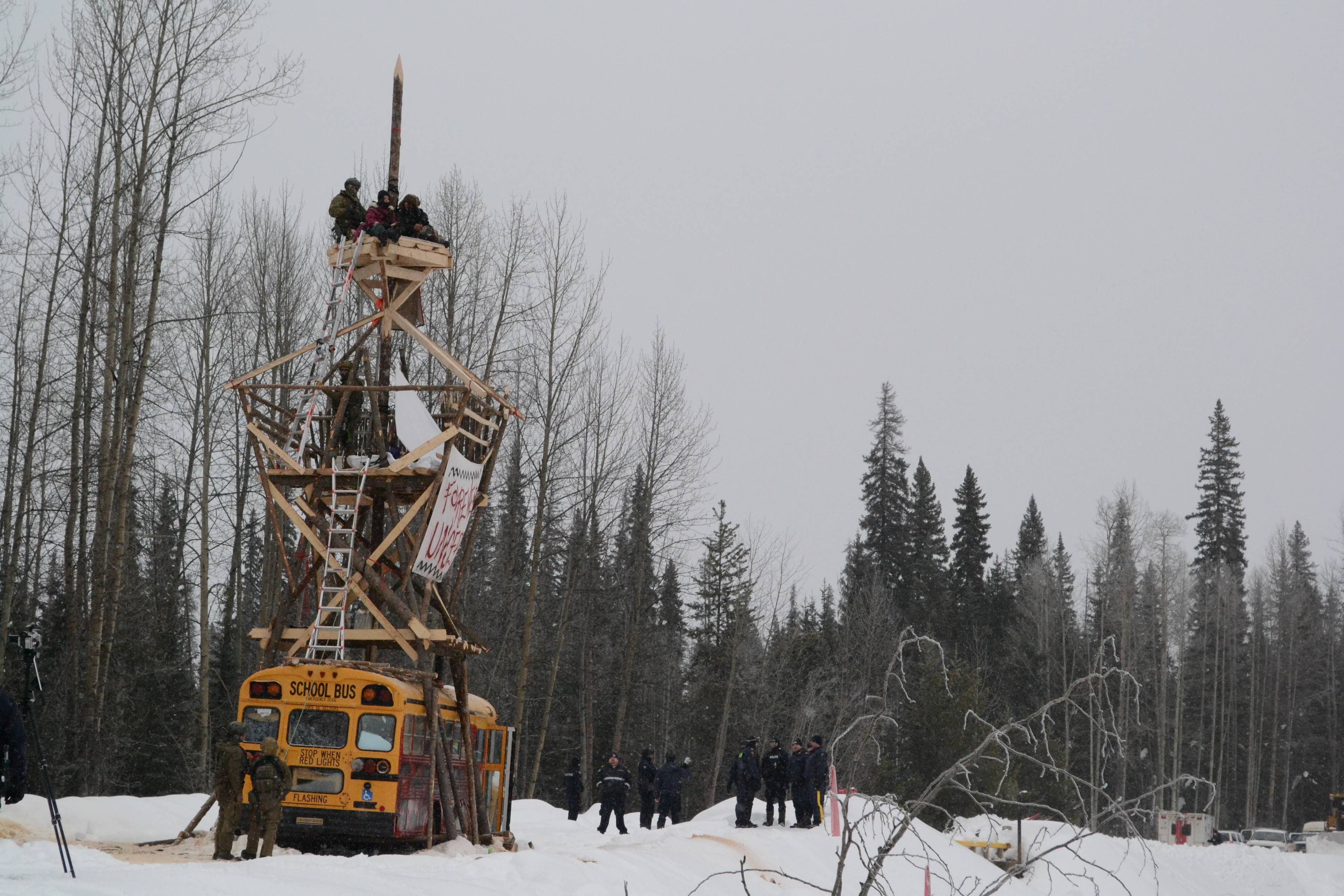 ‘Pipelines everywhere, but they have nowhere to go’

The United Nations Declaration on the Rights of Indigenous Peoples — which Justin Trudeau’s government pledged to adopt and which B.C. has supported, at least rhetorically, through Bill 41 — stipulates that free, prior and informed consent from the proper title and rights holders must be obtained for any project affecting their land, territories, and other resources.

Thus, when Coastal GasLink won the B.C. Supreme Court injunction last December, and the RCMP raids on Wet’suwet’en territory reached all the way to the Unist’ot’en Healing Centre, many Indigenous rights advocates perceived it as the “death of reconciliation” between Indigenous Nations and Canada.

“Today we are still facing the same violence just for being Indigenous, just for trying to live off the land and trying to protect what resources we have left,” said Smith, “even though doing so would be a benefit to everybody in the world.”

Smith said Indigenous people who are on-site keeping tabs on the pipeline construction continue to be accosted by police officers.

Oil has been trading at record lows, and gas prices have also dropped due to decreasing demand during the pandemic.

“This is an active act of warfare on sovereign nations, so to talk about reconciliation right now is a complete farce,” he insisted.

This struggle is only one of many examples in which protection of the environment and respect for the autonomy and sovereignty of Indigenous communities is pushed aside for the benefit of the fossil fuel industry and development of mega projects.

“What our communities really need is the ability to be self-sufficient and handle our resources ourselves. Free and informed prior consent cannot be achieved at gunpoint,” said Smith.

Eriel Tchekwie Deranger from the Athabasca Chipewyan First Nation in Alberta was also on the panel with Huson. She pointed out that not only has the fossil fuel industry proven to be highly destructive of the environment, but it is also showing its limits in terms of financial viability. Oil has been trading at record lows, and gas prices have also dropped due to decreasing demand during the pandemic.

“We have pipelines everywhere, but they have nowhere to go. The markets are collapsing and this system is dying before our eyes,” Deranger said.

“This could be an amazing opportunity to really reimagine what our world could look like for future generations. This is a time for cleansing, reconnecting with our spirituality and cosmology.

“We have the ability to lean on knowledge systems that go far beyond the spectrum of Western ideologies, imperial data and science to understand this crisis and build the post-pandemic world.”