Let the ancestors rest in peace at Grace Islet

Grace Islet rests just a few meters off the shore of Salt Spring Island in British Columbia. Formerly part of an ancient village known in the Hul'qumi'num languages as Shiyahwt, its harbour was a hub for Aboriginal fishing families from all over the Gulf Islands, eastern Vancouver Island and the Fraser River. The white shell middens ringing the islet point to thousands of years of human settlement.

When word got out last spring of a site alteration permit application for a private home on Grace Islet, referred to as shmukw’elu (a Hul'qumi'num word roughly equivalent to “graveyard”) because of burial grounds located there, First Nations leaders decided that this time, they would not bow.

“We are tired of moving our bones. We do not want to rebury the dead,” said Luschiim, a Cowichan elder.

Luschiim’s words resonated with islanders. Public meetings grew into solidarity gatherings, coalescing under the leadership of Joe Akerman, a resident of Salt Spring Island with mixed Cowichan and settler heritage. As building crews began delivering cement and lumber to the construction site on the shmukw’elu, Akerman set out in his kayak, circling the islet three times a day in an act of witness and defiance. First he paddled alone, but as people heard the sound of his drum echoing over the harbour, and watched the construction continue over the protests of First Nations, they joined him on the water.

Grace Islet became more than just a line drawn in the sand. For islanders of Aboriginal and non-Aboriginal descent, it became an opportunity to find a way to repair the damage of generations of colonialism.

“I cannot even fathom the double standards that exist,” said islander Briony Penn, who joined others on the water to protect Grace Islet. “We’re in this long, messy process of decolonization,” she added. “It damages the psyche of people when you continually live with these kinds of inequities.”

Grace Islet became more than just a line drawn in the sand. For islanders of Aboriginal and non-Aboriginal descent, it became an opportunity to find a way to repair the damage of generations of colonialism.

During the Great Land Grab of the 1880s, Shiyahwt’s inhabitants were herded off the island and onto reserves following land grants to settlers. It was a process of land appropriation carried out without treaty or compensation, which was illegal even at the time.

Robert Morales is a negotiator with the Hul’quimi’num Treaty Group, which includes the Cowichan, Chemainus, Penelakut, Lyackson, Halalt and Lake Cowichan First Nations. “Lands that had been owned and managed for centuries by Hul’qumi’num families and communities were suddenly off-limits,” he explained.

Ever since, First Nations have endured a succession of losses. “Year after year, defeat after defeat, First Nations have been forced to accept a fate of compromise of culture and beliefs that is and never has been truly acceptable to Elders and knowledge keepers,” said Akerman. At Poets’ Cove on Pender Island, Elders were impelled to rebury their ancestors’ bones after builders were caught paving a road with ancient material that included human remains. At Walker Hook on Salt Spring Island, to make way for a fish farm, Elders sifted through graves, salvaging what dignity for their ancestors could.

The result of government consultation with First Nations was a classic piece of colonial theatre.

“Amongst our people, our connection to the ancestors is very central to the culture, not only according to morality, but according to culture,” said Morales. “Just as in European culture, there are beliefs which impact the law. We have the cemetery act in B.C., for instance, that is a settler law with a spirituality piece to it. With respect to our own burials, First Nations are saying that we deserve the same respect. We want equal treatment.” 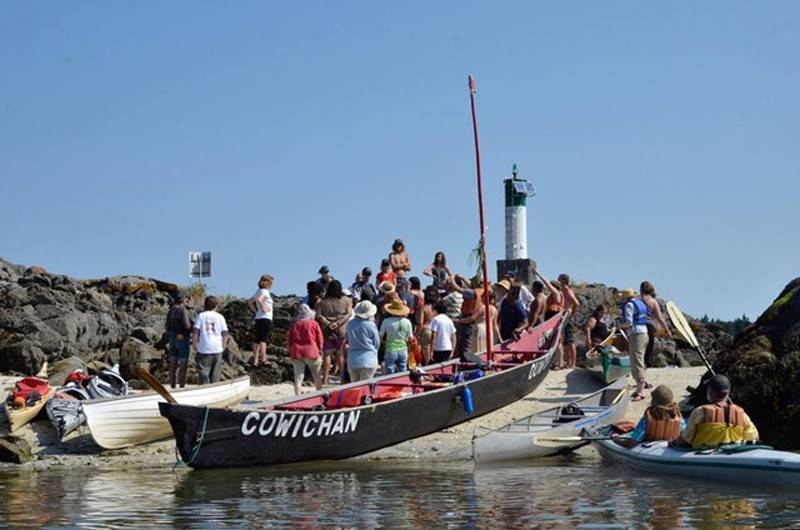 From the moment the first excavator blade hit the ground on Grace Islet, it was clear that neither the owner nor the province intended to abide by the terms of the permit or the Heritage Conservation Act.

The result of government consultation with First Nations was a classic piece of colonial theatre. Steve Thomson, the Minister of Forests, Lands and Natural Resource Operations, repeatedly spoke of the need to strike a "balance," which apparently included allowing construction to go ahead while giving the graves a two-meter buffer zone. The cairns were placed in protective plywood boxes, and likewise the government attempted to tidily box up First Nations’ concerns and hide them from public view. Chief Don Tom of the Tsartlip First Nation called the government’s compromise an “insult and a complete denial of the existence of our ancestors.”

“The spectre of First Nations actually having rights with respect to private land was very troubling for government.”

Salt Spring Islanders responded with equally theatrical tactics. Akerman and Penn erected a makeshift “house” over Penn’s great-grandparents’ graves in Ross Bay Cemetery in Victoria. Similar actions in cemeteries around B.C. and beyond followed, and people posted photos captioned with the hashtag #NoHouseHere.

As construction proceeded in the summer, First Nations and independent archaeologists collected evidence that showed cement walls bisecting cairns, graves enclosed in cement, gravestones shoved into piles and grave protection boxes sprayed with graffiti. Under the Heritage Conservation Act such violations can result in the revocation of a permit, yet the government did not to intervene. MLA Gary Holman, who joined the protests, told Parliament, “Our current legislation is supposed to protect these sites, but it's clear that political will is needed to make these laws effective.”

The owner of Grace Islet, Barry Slawsky, wrote in the Victoria Times Colonist of his “determination to be respectful of First Nations.” Yet he refused to allow cultural workers to visit graves, ignored requests to meet with First Nations and denied that the site was even a cemetery.

In response, Chief Don Tom delivered a stop-work order, issued by Coast Salish First Nations, to the construction site. Slawsky promptly launched a lawsuit against Chief Don Tom, also naming several Elders, MLA Holman and Victoria City Councillor Ben Isitt, all of whom had stepped peacefully onto the islet as part of a protest.

Local nations were reluctant to take on a costly and protracted legal battle, but the Supreme Court ruling affirming the Tsilhqot'in’s Aboriginal rights and title to their traditional territories offered a glimmer of hope. In December 2014, the Cowichan First Nation launched a civil suit against B.C., arguing that the government decision to allow private ownership of Grace Islet in the early 1900s was unlawful. “The spectre of First Nations actually having rights with respect to private land was very troubling for government,” says Holman.

“First Nations people are not relics. We are a resilient living and breathing culture with strong spiritual and cultural links to our ancestors.”

The province’s reaction was swift, says Cowichan Chief William Seymour. “The papers went out, and it was within the next two days that I got a call from the minister, saying he had a mandate from the premier to act.”

In January, after seven months of construction and years of frustrated negotiations, the B.C. government announced it would partner with local First Nations and the Nature Conservancy of Canada to purchase Grace Islet and manage it jointly.

“Without the insistence of the public to deal with these double standards with regards to cemeteries, our success in stopping the desecration would not be possible,” says Akerman.

Protecting the sacred with strengthened legislation

The Grace Islet victory is tempered by unresolved questions. Until the government demonstrates it is willing to create a process for dealing with ancestral burial grounds, Chief William Seymour is not ready to drop the Cowichan Nation’s case. “Once the government and First Nations and The Nature Conservancy have all agreed that everything has been dealt with and there are no problems, at that point we’ll pull that civil claim,” he says.

Holman thinks the Cowichan Nation should pursue the case. “We may have resolved Grace Islet, but the issue still remains. There are sites all over the place that need to be addressed, and I don’t think First Nations should be giving up any levers they have.”

MLA Maurine Karaganis has introduced a bill patterned on work in Australia and New Zealand that foregrounds the cultural importance of burial sites. “There's a desperate need for tools to help First Nations communities and those affected as they go about their business. The issue that has arisen here around Grace Islet is really just a further stage of non-First Nations communities’ indifference to primal and ancestral burial grounds,” she said.

“The heritage act, as it’s currently written, has no teeth whatsoever. It has no ability to enforce any kind of protection. There would need to be some kind of funding component in order to successfully provide more protection,” said Karaganis. Going forward, there is no shortage of policy guidance. In the United States, the federal Native American Graves Protection and Repatriation Act, enacted in 1990, includes a framework for repatriation of remains and cultural objects.

“In the longer term it is essential that we develop legislation that will protect First Nations cultural sites, not for their heritage qualities or for their scientific value but for their inherent cultural value,” said Akerman. “First Nations people are not relics. We are a resilient living and breathing culture with strong spiritual and cultural links to our ancestors.”

The legal snowball forming in the wake of Grace Islet is rolling along, gaining size and speed on its way to the front steps of Parliament. Along the way, settler communities are awakening to the many atrocities of the past, and learning how move forward in solidarity with Indigenous people.