“We’re not backing down. This is about the survival of our ecosystem, of our way of life.”

Charles Ratt was 10 years old when he learned to field dress a moose.

His father, Abraham, handed him a knife and the boy got to work, sawing through bone and sinew, parsing fur from muscle and removing the animal’s warm, blood-soaked bowels to prevent the meat from spoiling.

It took him almost two hours to finish the job, and he hadn’t even shot the moose.

“The way I was raised, you learn how to prepare the moose, learn how to take care of the moose before you ever learn to take its life,” said Charles, a band councillor with the Algonquins of Barrière Lake. “We’re not given a gun and brought hunting for target practice. We’re taught about the hunt as its own way of life.”

Charles would master the craft of field dressing over the next six hunting seasons, learning not to waste any part of the animal before ever being allowed to shoot it. He was 16 when he killed his first moose.

SUPPORT THE ROVER If you’d like to see more journalism like this, please support The Rover, a reporting project brought to you by Christopher Curtis and Ricochet Media.

Charles, his father and dozens of others have formed three blockades cutting off Highway 117 from the dirt roads that lead to moose trails in La Vérendrye Wildlife Reserve in Quebec. Using trucks to keep sport hunters out, the group has been camping at the site since moose hunting season opened last Sunday.

“We’re ready to stay here until it ends in October,” said Charles. “We’re not backing down.”

The Anishinaabe in La Vérendrye still live off the land, harvesting fish, small game and sometimes moose to sustain themselves year round. This is how things were long before sport hunting opened to settlers in the 1960s, and it’s how Charles wants it to be for the generations that come after him.

“This is about the survival of our ecosystem, of our way of life.”

Sûreté du Québec trucks sit idling near the three camps, not immediately visible but close enough that their presence is felt by the families gathered around each fire by the highway.

Charles says the number of moose is dwindling because of trophy hunting and forestry in the wildlife reserve, which spans more than 12,000 square kilometres in the wilderness between Mont Laurier and Val-d’Or.

“What do you think the police would do to me if I went onto a farmer’s land and shot his cow?”

The Algonquins of Barrière Lake tried going through the official channels last year, asking Quebec to impose a moratorium on issuing moose hunting licences in the reserve. Ultimately, they were able to get the Ministry of Forests, Wildlife and Parks to fund a study of the moose population, which confirmed their fears.

Over the span of six weeks last winter, helicopters flew over the reserve and tracked 2,074 moose. Density had dropped 35 per cent since the last census was taken in 2008 — down to 2.06 moose per 10 square kilometres.

In a statement sent to Ricochet Media, a ministry representative said the population drop doesn’t warrant a moratorium. Instead, the ministry cut the number of sport hunting licences for female moose from 200 last season to 100 this year.

Overall, the number of sport hunting licences for the reserve decreased from 250 to 175. 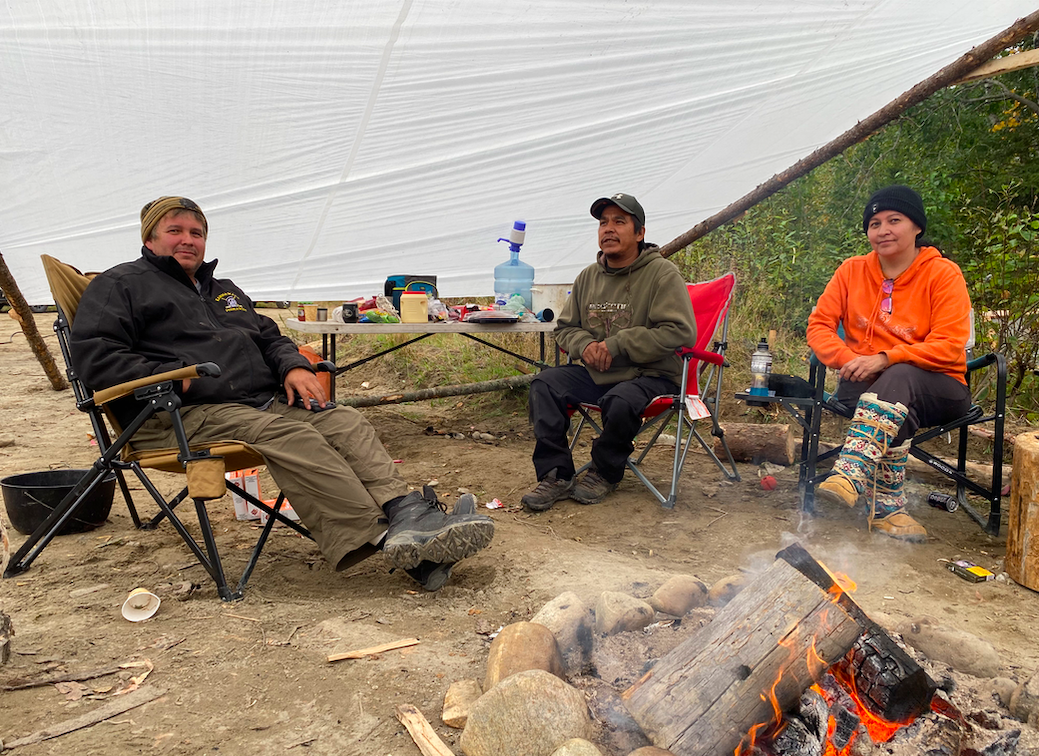 Abraham Ratt, 72, stood in the rain Tuesday, securing a wooden blockade with a spare truck tire and some rocks. After 40 years of living in the bush, he said he’s afraid of what’s next for the moose in Anishinaabe territory.

He rubbed his hand through a thick scruff of grey hair, shaking his head as he described seeing a rotting, headless moose carcass sprawled on the ground a few years back.

“It’s just an awful sight, a wasted life,” he said. “They want the head and the antlers for a trophy but they just leave everything else there. No respect. The way we were raised and the way we taught our children is that one moose feeds many families. You kill it, you dress it, you share it.”

“This is our harvest. What do you think the police would do to me if I went onto a farmer’s land and shot his cow?” said one woman, who did not want her name published. “I’d be locked up and rightly so. You don’t waste a kill. You don’t take food off a family’s table.”

“Even when the logging companies replant trees, they only plant one species.”

The sport hunt for moose in La Vérendrye Wildlife Reserve dates back to a five-year pilot program launched by the provincial government in the 1960s. Three elders who spoke to Ricochet said the program was supposed to end or be restricted after the initial period.

“But it never stopped,” said Charles.

Community members say their decision to block the roads and risk a confrontation with heavily armed hunters isn’t one they took lightly.

“What other choice do we have?” said Shannon Chief, one of the protest’s organizers. “We’ve been here since time immemorial. If you destroy the things that sustain us, you’re destroying what makes us Anishnaabe.”

A sport hunter approached one of the camps Monday, according to witnesses who spoke to Ricochet, sitting in the passenger seat of a pickup truck and clutching a rifle against his chest. They said it violates federal gun safety laws and reported the incident to police.

Footage of the ensuing police intervention, posted on Facebook, shows two SQ officers listening to a complaint about the sport hunters and politely debating what the law says. Ultimately, they didn’t take action against the sport hunters.

Another hunter posted a photo of the blockade on Facebook, with people joking about running over “Indians” in the comments below.

Though there have been tense moments, Charles says most of the sport hunters have listened to the Anishinaabe and left the site without much of a fuss.

Sport hunting may have triggered the blockades but Charles says commercial logging also plays a huge role in disrupting wildlife in Anishnaabe territory.

“Without trees to cover the forest, snow gets thick and it becomes much easier for wolves to hunt moose,” said Charles. “Moose aren’t like caribou, they don’t herd, they’re strong but if they’re out in the open and alone, they’re much easier prey.

“And it’s depleting (the moose’s) food source. Even when the logging companies replant trees, they only plant one species. They take away the biodiversity that helps all species survive out here. What’s happening in these woods is not right.”

The Anishnaabe in Barrière Lake do not have such a bargaining chip.

Most days, a drive south through the reserve means being stuck behind a tractor-trailer loaded with freshly cut timber from camps owned by Resolute Forest Products, Louisiana Pacific, Eacom and other firms.

Tensions over logging are another source of political tension in the region. Just a short drive north of the moose blockades, members of the Kitcisakik First Nation gathered at dawn Sunday to prevent forestry workers from entering a camp on their traditional territory.

“They had no business cutting there so we cleared them out,” said one of the protesters, who did not want to give his name. “It was peaceful and we managed to get someone from the government to hear us out.”

By Tuesday, logging operations had resumed. But a small camp remained around a trailer near the heavy machinery, watching over the land they say they’re protecting for future generations.

Quebec, Canada and Barrière Lake had been in talks to co-manage the land in La Vérandrye, but the federal government pulled out in 2001.

Another tentative deal, between the Quebec Liberals and Barrière Lake, fell apart at the negotiating table in 2017.

Hundreds of kilometres north — in Cree territory — the James Bay and Northern Quebec Agreement allows for co-management of wildlife on a vast territory. Of course, that was negotiated by the Cree whose rivers Quebec needs to power its cities with hydroelectricity.

The Anishnaabe in Barrière Lake do not have such a bargaining chip.

Back at Charles’s camp Tuesday, he shielded himself from the rain under a tarp next to the fire. He was flanked by old friends, a hunting dog and a little girl brandishing a slingshot.

She smiled and said she’s learning to train the dog.

The dog scurried off behind a trailer and the girl chased after it. Like Charles so many years ago, she’s being schooled in the ways of her ancestors.

She’ll grow up, learn her multiplication tables, watch cartoons and do kid things. But she’ll also learn how to live on and preserve a forest that breathes life into Anishnaabe territory.

Over by the fire, Charles said it will take discipline to keep that way of life going. He said that while it isn’t his place to tell other Anishnaabe hunters they can’t exercise their right to harvest moose, he hasn’t hunted one in two years.

“I have partridge in my freezer, I have beaver and other small game,” he said. “I’m doing okay but others may not be. I’m willing to sacrifice my rights to give the moose time to get healthy and build their numbers back up. Why can’t sport hunters do the same?”

This article was produced through The Rover, Christopher Curtis’s investigative journalism project with Ricochet. Sign up below for weekly emails from the front lines of journalism.
As a top polluter, what is Canada’s responsibility to humanity?
The Dirty Dozen: ‘Carbon bombs’ threaten to blow up Canada’s climate commitments
Salmon is life: a lesson in Indigenous education