COVID sucks, unless you’re a billionaire. Canada’s richest have raked in $37 billion since March.

The top 20 richest billionaires in Canada have amassed $37 billion in collective wealth increases since March, when COVID-related lockdowns and closures began across Canada, according to a new report from the Canadian Centre for Policy Alternatives.

This revelation about the scale of wealth gains for the country’s most affluent over the past six months comes on the heels of new polling released this week that shows 76 per cent support for a wealth tax in Canada. A wealth tax consistently polls as among the most popular public policy proposal in Canada, with majority support from backers of every political party.

“Fundamentally this is about the power of a wealthy few, such as Galen Weston's Loblaws, to claw back the pandemic pay of frontline workers to increase their profits,” CCPA researcher and report co-author Alex Hemingway told Ricochet. “And their power, under current policies, to amass huge portions of wealth that is actually created by all of us.”

“But if people get organized and exert pressure from below, it is possible to change those policies and shift that balance of power.”

In several cases the gains made by Canada’s richest 20 people have come at the expense of the working class, including those in frontline jobs most at risk in the pandemic. As the report notes, shares for Weston’s Loblaws went up after the company cancelled its hazard pay benefits for grocery store workers in June.

The report, which is based on publicly available data from Forbes magazine, shows that the Weston family fortune grew by $1.6 billion since March 18, topping $10 billion in total. And the Westons weren’t even among the top five billionaires when it comes to wealth increases during the pandemic. 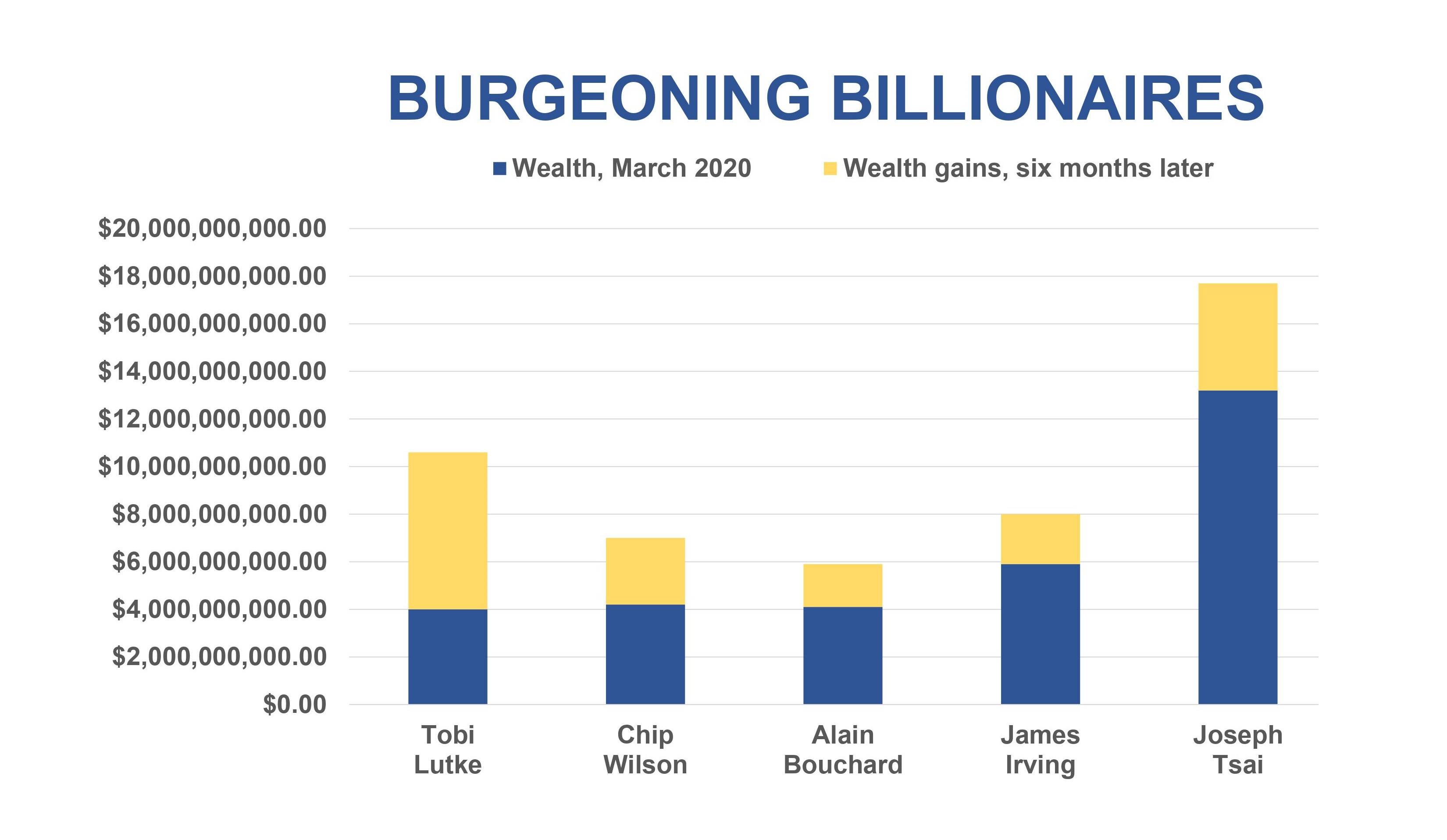 The richest family in Canada, the Thomsons, who own the Globe and Mail as part of a sprawling media and publishing empire, have seen their fortune increase by nearly $9 billion during the pandemic, up to $50.6 billion from $41.7 billion in March.

Shopify CEO Tobi Lutke, meanwhile, has more than doubled his wealth in just half a year to over $10 billion. Alibaba Group co-founder and Brooklyn Nets owner Joseph Tsai saw his total wealth shoot up by $4.5 billion, and Vancouver real estate investor and Lululemon founder Chip Wilson saw his fortune stretch another $2.8 billion to a total of $7 billion. New Brunswick oligarch James Irving, rounding out the top five gainers, saw an increase of $2.1 billion between March 18 and Sept. 14 of this year.

This list leaves out perhaps the world’s richest person who holds Canadian citizenship: Elon Musk. The Tesla founder’s personal fortune has more than tripled during the pandemic and is estimated at more than $120 billion.

Jim Pattison and B.C. premier John Horgan
Province of BC

According to the CCPA report, the massive wealth gain at the very top “reflects the increasingly clear decoupling of the stock market from the real economy.”

B.C. billionaire Jim Pattison has also seen a big jump in his fortune, up $1.7 billion since March. The chain of grocery stores he owns rescinded hazard pay for workers back in May, barely more than two months into the public health emergency. “We own and finance the company, but we don’t run them,” Pattison told the press at the time.

The report situates this type of pandemic profiteering within a larger context of society-wide inequality:

At a time when Canada’s richest 1% controls 26% of our wealth, and when billionaires hold 4,448 times the wealth of the typical family, both an emergency, one-time excess wealth tax and an annual wealth tax should be on the table.

Public support for a wealth tax

The report comes on the eve of a new throne speech by Liberal prime minister Justin Trudeau that — unless his minority government is brought down in a confidence vote in Parliament — is widely expected to include new government spending on public services and ongoing emergency pandemic response.

Even without these new details of pandemic-time profiteering by the billionaire class, Canadians have consistently shown overwhelming support for new wealth taxes and increased corporate taxes. The latest polling, released Monday by Abacus Data and the Broadbent Institute shows 76 per cent support for a wealth tax and 73 per cent support for raising taxes on corporations that have made large profits during the pandemic. 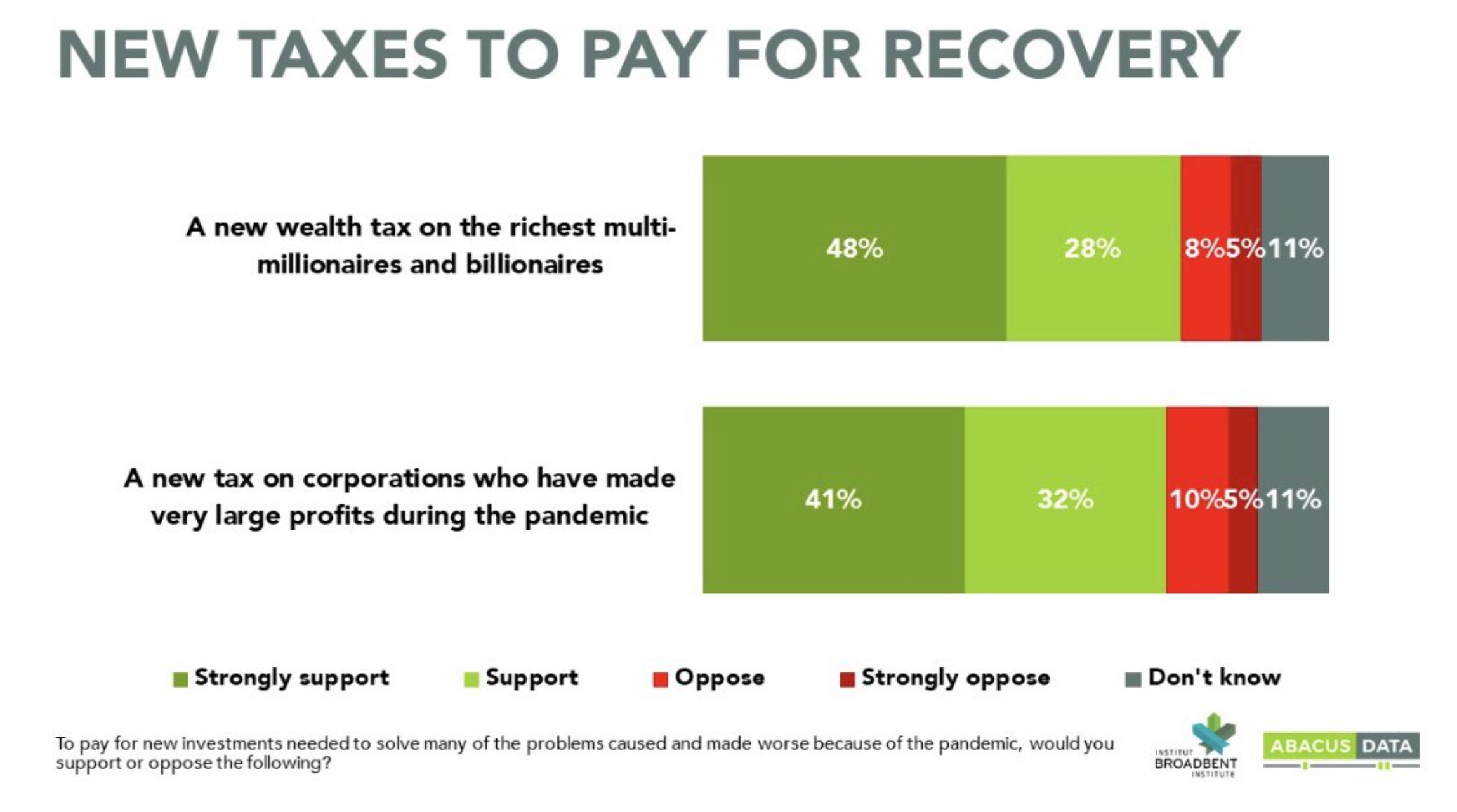 These figures are consistent with polling done over the past couple of years. In May 2019, Ricochet reported on a poll that showed 67 per cent support for a wealth tax, including among a majority of Conservative voters. The proposal appears to have only gained support since then.

This public sentiment is increasingly widespread worldwide. Earlier this month, Tax Justice UK released research that showed nearly three-quarters of UK residents favoured higher taxes on the rich. Again, results showed that support stretches across the left-right divide, as 64 per cent of Conservative voters said they would support such measures.

Will Trudeau’s upcoming throne speech include plans for a wealth tax in Canada? Don’t hold your breath.

Candidates in the ongoing Green Party of Canada leadership race have made even bolder proposals.

While some conservative pundits warn of reckless spending ahead, leaks from government sources have for the most part appeared to be aimed at dampening expectations about new social spending, let alone plans for transformative policies such as a Green New Deal.

All of this points to the continued dominance of the framing of “fiscal conservatism” or “fiscal responsibility,” terms proudly bandied about by centrists of all partisan stripes. These are really euphemisms to obscure the whole neoliberal economic consensus whereby the state’s role is to facilitate the upward transfer of wealth from those whose labour produces it and keeps society running. It diverts the discussion from the real fiscal irresponsibility: so much money left to accumulate among the billionaire class.

In Parliament, the NDP continues to advocate for the meagre 1 per cent wealth tax the party campaigned on during the 2019 federal election. New Westminster-Burnaby MP Peter Julian has introduced a motion for a 1 per cent tax applied to assets in excess of $20 million. The Parliamentary Budget Office has estimated the NDP proposal would generate $5.6 billion in new revenue.

Candidates in the ongoing Green Party of Canada leadership race have made even bolder proposals. Dimitri Lascaris, for example, has proposed a 100 per cent tax of wealth over $500 million, effectively calling for a “wealth cap.” Green leadership candidates Amita Kuttner and Meryam Haddad have also called for a wealth cap.

For the billionaires whose ballooning fortunes are documented in the CCPA report, a few percentage points makes a big difference. With a wealth tax of 1 per cent on wealth over $20 million, the Thomsons would pay just over $500 million. With an increase to 2 per cent starting at $50 million, they’d owe over a billion dollars in wealth taxes, which would still represent a mere fraction of the $8.8 billion they’ve amassed during the pandemic and leave them with a personal fortune of just under $50 billion.

In addition to advocating for a wealth tax, the report calls for corporate tax reform and a crackdown on tax havens.