‘If you keep displacing these people, you’re just going to see more funerals’

Bulldozers and police descended on the homeless camp under Highway 720 in Montreal Monday morning, clearing about 15 people from their tents and sleeping bags.

The decision to bulldoze the Atwater Ave. site came after a Westmount resident told police last week they wandered into the camp one night and were confronted by a man wielding a machete.

“You have citizens sometimes who come to the camp to play police and it’s not always a good idea for people to do that,” said Dave Chapman, who runs a nearby homeless day centre. “We’ve had three overdose deaths in the last month, we just held a memorial last week.

“If you keep displacing these people, you’re just going to see more funerals.”

SUPPORT THE ROVER If you’d like to see more journalism like this, please sign up for The Rover, a newsletter-supported reporting project brought to you by Christopher Curtis and Ricochet Media.

The camp had been in place for years, but its numbers began to swell over the summer. Experts say the economic crash associated with the COVID-19 pandemic has put pressure on Montreal’s shelter system and the city’s homeless population may be on the rise.

Chapman says two of the three people who died of an overdose this past month are Indigenous women. He says the people who frequent the Resilience Montreal shelter are struggling to access addiction counselling and other services that might be more widely available were it not for the pandemic.

“Continual displacement of the homeless population leads to more problems like overdoses,” said Chapman. “When you lose track of people and the ability to check up on them, often the results are dire.” 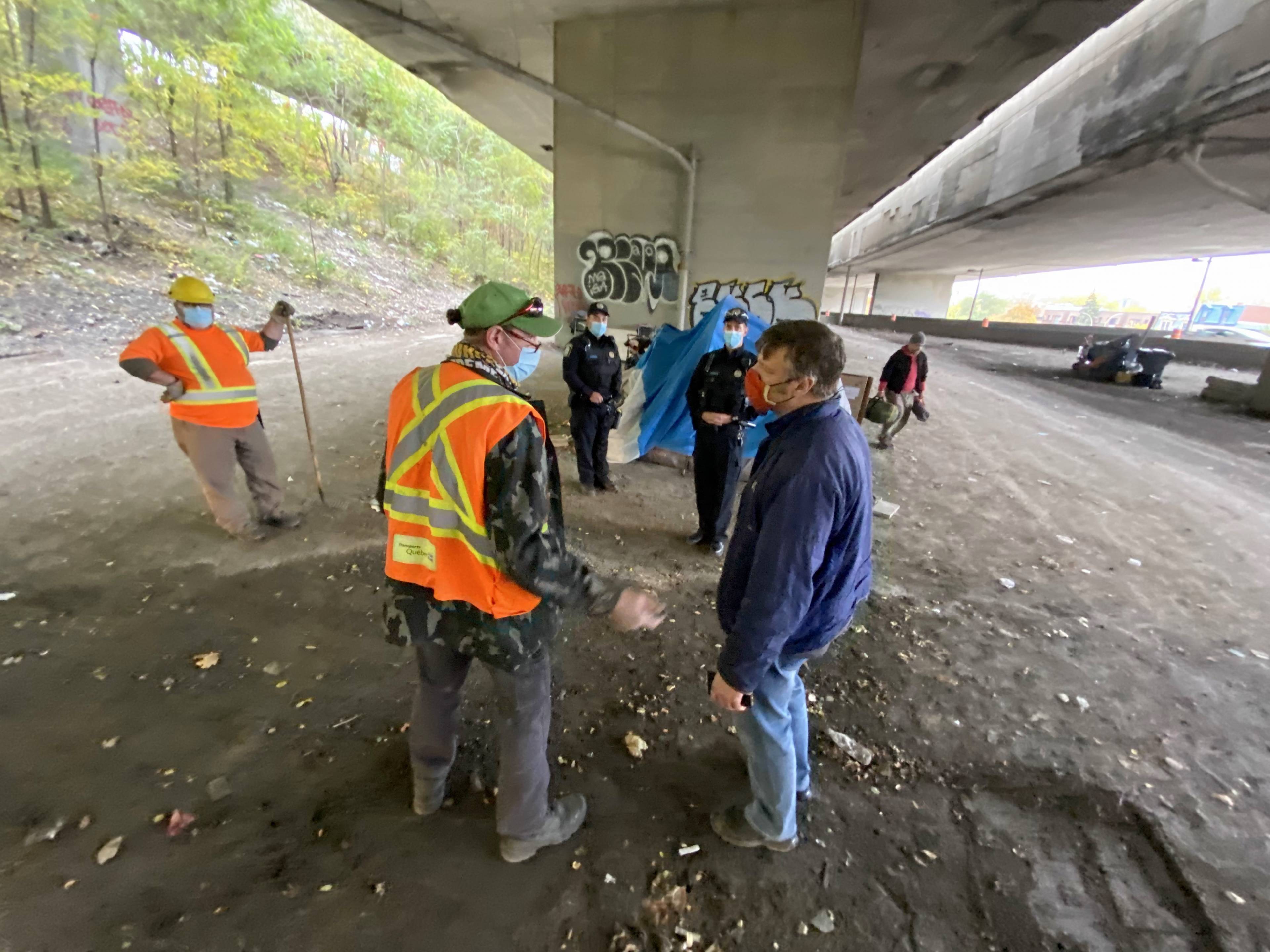 A man going by the name “Vince,” who has been living under the highway with his girlfriend for four months, said he was given an hour to move his camp Monday.

“I have my whole life here, it’ll take five hours to move this at least,” he said. “We keep a clean camp, we sweep, we dispose of our garbage, we keep to ourselves. People come by and film us sometimes and I suppose they report us to police as well.”

The site belongs to Transport Quebec and workers from the ministry were there Monday, clearing it so engineers can inspect the concrete beams that support the highway.

Two police cruisers idled at the entrance of the camp and four officers stood by as the homeless packed up their belongings and sauntered off.

“I don’t know where I’ll sleep tonight,” said Jacko, who did not want his last name published. “I guess I’ll have to find another camp, I can’t stay in a shelter.”

Mayor Valérie Plante and the people in charge of Montreal’s shelter network are preparing hundreds of emergency beds at the old Royal Victoria Hospital and other sites near downtown.

Sam Watts of the Welcome Hall Mission has been at it since the beginning of the pandemic, hustling to ensure that everyone who needs a warm, safe place to sleep will be taken care of.

“A tent in the city is no place for a person to sleep, we want to give people a place of their own, ideally,” said Watts in an interview with Ricochet last month. “Of course, we also don’t want people being forced from their camps without having a place for them to go either.”

Sources across Montreal’s shelter networks say the number of homeless camps has exploded this year. There are sites as far west as Lachine and as far north as the Metropolitan Highway, plus a camp across from the Port of Montreal houses some 50 people.

“There’s a camp on the other side of the highway, near the railroad, but workers cleared the trees that hid it from the public,” said Vince. “If we go there, I don’t know how much longer we can hold out.”

Vince says he’s found a place to stay for the beginning of November so he’s stocked up on supplies to fill his new apartment. He doesn’t know if he’ll be able to move them all before his camp gets bulldozed.

“A tent in the city is no place for a person to sleep, we want to give people a place of their own.”

As he spoke, the roar of a front-end loader drowned out his voice. It scooped up garbage bags and the remnants of a tent before dumping them into a truck.

“We take no joy on this, we’re just doing our job,” said one worker, shaking his head. “At the end of the day, this property belongs to the province and we have to do what they say.”

Police sources say commanders at nearby Station 12 and Station 20 resisted the idea of mowing the camp down. They say the push came from Transport Quebec.

A representative from Transport Quebec was not immediately available for comment.

Chapman, for his part, pleaded with police to give the residents more time. He said they struck a deal where they’ll be allowed to cross Atwater Ave. and camp under the Westmount section of the elevated highway.

This article was produced through The Rover, Christopher Curtis’s investigative journalism project with Ricochet. Sign up below for Curtis’ weekly newsletters from the front lines of journalism.
As a top polluter, what is Canada’s responsibility to humanity?
The Dirty Dozen: ‘Carbon bombs’ threaten to blow up Canada’s climate commitments
I was raised in an Indigenous community — but even that doesn’t make me Indigenous