‘I don’t want to die out here:’ Homeless bear brunt of Legault’s indifference

While he claims there are plenty of spaces in shelters, ‘it’s clear that Legault’s words are disconnected from reality’

Taco poked his head out of Pat’s jacket, still foggy from a nap.

They were an odd couple: the chihuahua with his elegant, pointed ears and caramel skin, and Pat, whose broad shoulders supported a canvas winter coat zipped down just enough to give Taco a view of the homeless shelter.

Even behind a mask, Pat’s face looked hardened by too many winters on the streets. But Taco rounded some of his edges off, making the pair easily approachable as they stood in line for the COVID-19 vaccine.

“You know, I’m one of his favourites,” said Marc, while scratching Taco’s chin. Marc is both a volunteer and a client at the Resilience Montreal shelter on the western edge of downtown Montreal. “When Pat and I were sleeping at the Place Dupuis shelter, he would hide under the bed. Only came out when I called him. Isn’t that right, Taco?”

It’s been two weeks since a COVID-19 outbreak pushed Montreal’s shelter system to the brink. Day centres had to dramatically reduce capacity, overnight warming centres closed and one man reportedly froze to death near Parc Ave. before dawn Sunday.

More than 50 per cent of those screened for the virus at these facilities came back positive in some rounds of testing. After days of outcry over the crisis on Montreal’s streets, the Quebec government finally agreed to vaccinate the homeless population. Up to 2,000 will be inoculated in the coming weeks.

People waited for the vaccine outside Resilience Montreal for hours Tuesday, forming a line that stretched to Atwater Ave. With the sun dipping behind nearby office buildings, I felt the damp, freezing air creep into my boots. I’d only been in the cold for 20 minutes.

An older man looked towards me, smiling under his mask.

“Some people are paranoid, they spend too much time reading conspiracy theories,” he said. “Me, I’ll take my chances with the vaccine. I’m done with this street shit, I’ve got a spot in detox and I’m getting clean this year. I don’t wanna die out here.”

He looked back at Taco with wide eyes as he walked towards the nurse who would administer the vaccine.

Death loomed over this neighbourhood long before any of us had ever heard of the new coronavirus.

People who frequent west downtown have a shorter lifespan. Some die in their sleep, under the Highway 720 overpass or on a park bench next to Atwater métro. The most hard-hit take their lives after years of struggling with traumatic memories and mental illness.

For far too many, relief comes in a 40-ounce bottle of malt liquor, a hit of speed, a syringe loaded with heroin or some combination of the three. Fatal overdoses are on the rise in west downtown. A tainted batch of heroin killed at least three people in the area these past two months.

But there are hopeful moments too: a warm cup of coffee in the sun, a styrofoam container full of French fries and gravy, a chihuahua peeking out of a friend’s coat like some tiny prince.

Just outside the shelter on Ste-Catherine St., Nogeeshik Isaac walked between the cars stopped at a traffic light, extending his styrofoam cup to collect spare change. No one rolled down their window or made eye contact with him. 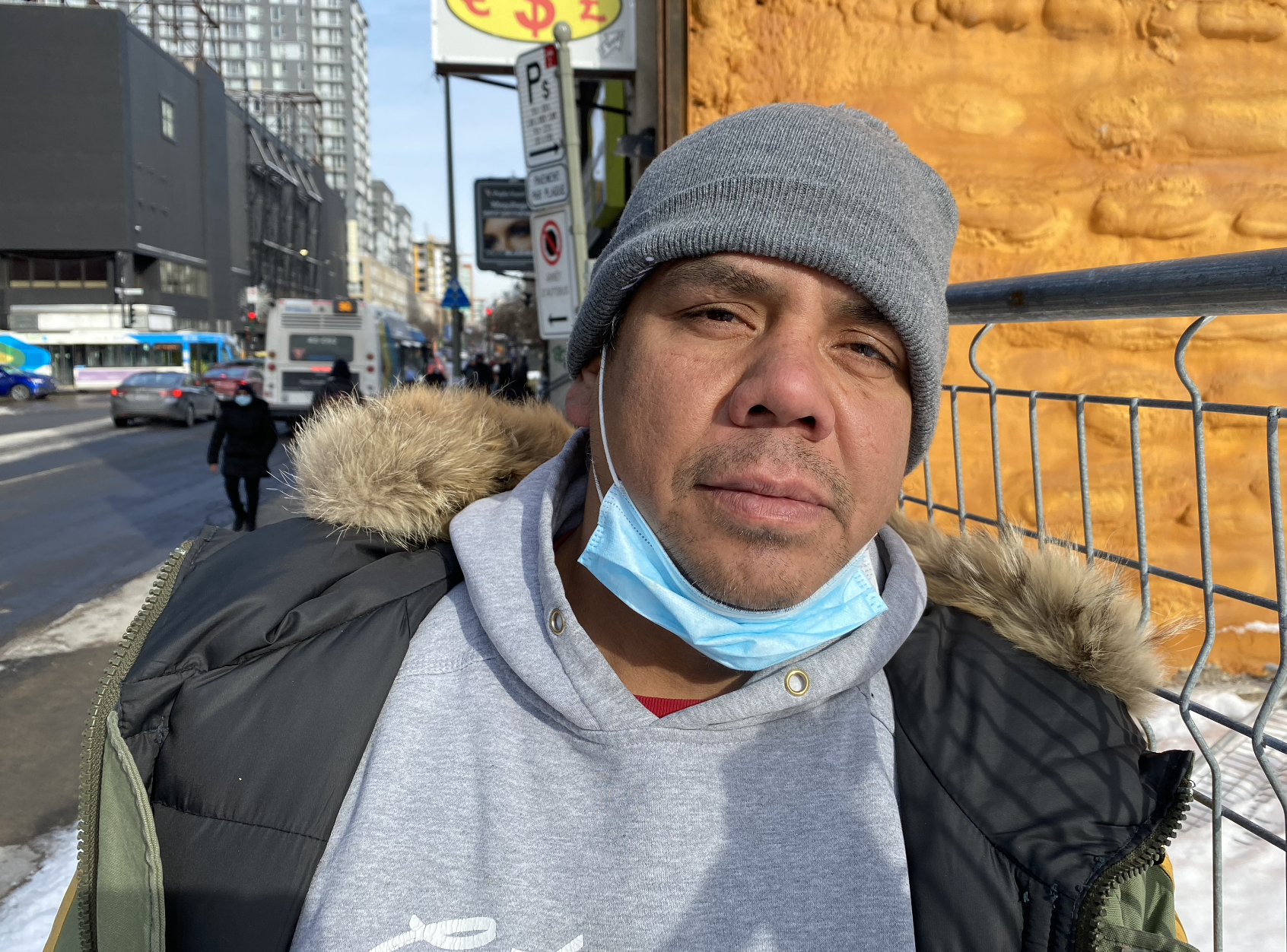 “I’m just looking for some love, man,” said Isaac, who towers over the idling cars. “Something, anything, I just need a little bit of love.”

The night before, police caught Isaac outside after curfew and fined him $1,500. He had nowhere to stay that night so he hung out around an overpass in Notre-Dame-de-Grâce until the officers spotted him.

“They didn’t offer to take me to a shelter, they just called me over and gave me and my girlfriend a ticket,” said Isaac. “Afterward they said they could take me somewhere to spend the night. But I just tore up the ticket. I was pissed off.”

Isaac suffers from chronic pain. He says the cartilage in his knees has been worn down and his bones scrape against each other with every step he takes. So he uses prescription opioids to stay on his feet and tries to find a warm enough place to sleep each night.

Under the rules of Quebec’s curfew, homelessness has effectively been outlawed. Premier François Legault’s initial justification for subjecting individuals experiencing homeless to fines was that Montreal has more than enough beds to accommodate them in an emergency shelter.

Talking to homeless people and a dozen street workers, it’s clear that Legault’s words are disconnected from reality.

No exemption for the homeless

When Pat and Taco went to the usual shelter they use on Monday, it was closed. So they huddled together in an alley downtown, on a night where temperatures dropped to nearly −30 C.

“We made out alright,” Pat said. “But we need to find a place before February, when things get really bad.”

On Sunday, 51-year-old “Napa” Raphael André reportedly froze to death just outside the Open Door shelter on Parc Ave. An outbreak of COVID-19 had forced the facility to shut down its overnight services. When a friend found his body around 3 a.m. Sunday, Napa was huddled in a portable toilet. His skin was cold to the touch.

A reporter asked Legault on Tuesday whether, given Napa’s death, it might be time to exempt the homeless population from fines so they aren’t pushed further into the shadows. The premier’s answer was baffling.

“If we give an exemption to the homeless, anyone can go around and claim to be homeless,” Legault said. “It’s not something we’re considering.”

(Perhaps it’s worth noting that Legault’s government has exempted ice fishers from the 8 p.m. curfew.) 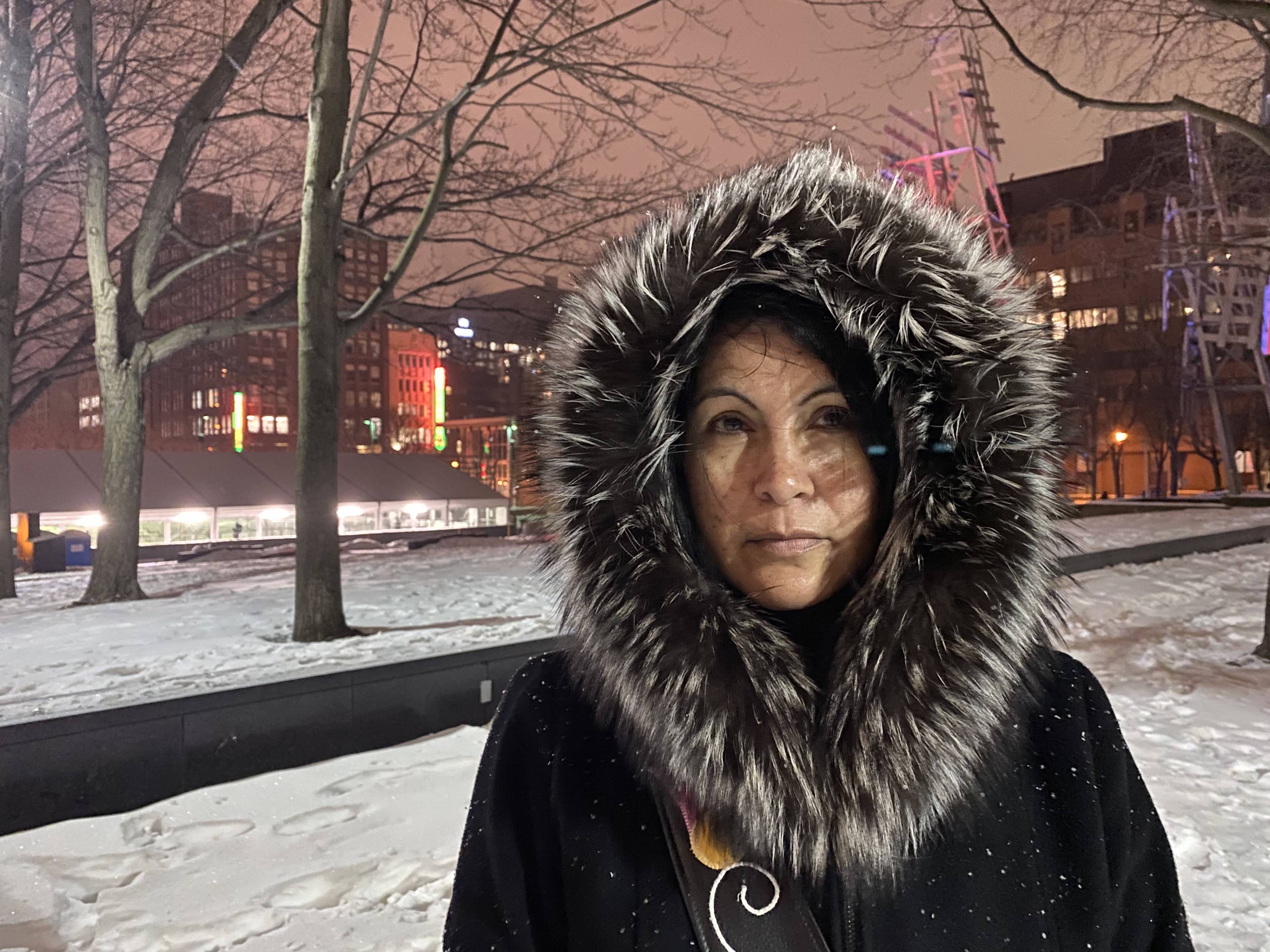 Another man, waiting for his vaccine, joked that if he was stopped by police, he’d give them hell.

“I fight back,” he said, shaking his cane, as the others laughed.

Like Isaac, “Napa” and hundreds of people homeless in Montreal, the cane-wielding man is Indigenous. He’s Ojibwe from Northern Ontario but wears a baseball cap with the Haudenosaunee flag — a leaf flanked by four squares over a purple background.

“I wear it out of respect for the Mohawks,” he said. “I’m in their traditional territory. There’s too many of us on the streets in our own lands.”

It isn’t lost on anyone out here that Legault’s policy decisions will disproportionately impact them.

If their fines remain unpaid, they’ll be summoned to municipal court and forced to work off their debt at a community centre or by collecting garbage by the side of the road. Any hopes they have of getting a job or going to detox will be weighed down by that debt.

That is, if they survive another winter on the streets.

This article was produced through The Rover, Christopher Curtis’s investigative journalism project with Ricochet. Sign up below for weekly newsletters from the front lines of journalism.
Small parties bring new ideas on policing to Montreal election
A surplus of denied claims: Doug Ford’s WSIB giveaway will hurt injured workers
INVESTIGATION: RCMP misled public about pepper spray incident at Fairy Creek