They grasped at traces of Amanda, pulling together whatever memories remained.

Her soft cheeks glowing across a cell phone screen, a message of condolence left on her Facebook page, a Tupac song that evokes some lost moment among friends.

Anything to keep from the darkness of those final days.

Nogeeshik Isaac was there when it happened. He can’t shake the memories.

“She was alive when the ambulance took her away,” said Isaac. “I didn’t know what to do. You try CPR, you call for help but it… it was an awful thing.”

Tears streamed down his face as he spoke about Amanda, a woman he calls his “adopted sister.” Isaac stood on a sidewalk outside Resilience Montreal Wednesday, shifting between dejection and rage, trying his best to make sense of another senseless death.

The other folk who frequent the west downtown shelter walked past the lumbering man, patting Isaac’s back before hopping over a puddle and onto Atwater Ave.

Isaac was staying in a room across from Amanda on Sunday. They had holed up in a motel somewhere among the garages and machine shops that dot Saint Jacques St. West.

“Her boyfriend came knocking at my door after midnight, she was overdosing,” Isaac said. “So I went in and tried to do something. He was an intravenous drug user. Dilaudid, fentanyl, stuff like that.

“I just can’t do this anymore. I want to give up.”

Not that long ago, overdoses were something that happened dozens of blocks east on Berri St. — a place known as the epicentre of Montreal’s open air heroin trade.

But harder drugs have migrated west in recent months. Last fall, two clients at Resilience Montreal died with injection opiates into their bloodstream. Over the Christmas holiday, a young man who stayed at the nearby Welcome Hall Mission overdosed. He was 24.

The arrival of heroin around Atwater Ave., Cabot Square and the surrounding blocks has coincided with another crisis — drugs cut with the synthetic opioid fentanyl.

“For years, Quebec had somehow managed to avoid the fentanyl crisis that hit the rest of North America,” said Jean-François Mary, executive director of the CACTUS Montreal safe injection site. “But exceptions don’t stay exceptions for long. Fentanyl was going to hit our streets sooner or later and it has.

“We used to see an overdose a week on our premises. That jumped to one overdose every day in the past few months.”

The overdose crisis has been exacerbated by another factor, Quebec’s province-wide curfew. Intravenous drug users are afraid of going outdoors after 8 p.m. to use a safe injection site. Last week, Mary said, less than 10 per cent of CACTUS’ regular clients were using on-site.

“Those people didn’t just stop doing drugs,” Mary said. “They’re using at home, alone, where they could overdose and die.”

In the four years since CACTUS Montreal was founded, not one person has died at the facility. There have been hundreds of overdoses but medical staff always intervene to save the person by injecting them with the drug naloxone.

At Resilience Montreal, almost every intervention worker carries a black pouch with a naloxone kit inside, a sign of the times.

“I’ve been out here for years and I’ve never seen it like this,” said David Chapman, the manager of Resilience Montreal. “We’re planning all these memorials lately, it’s hard to keep track of the dead.

“We’ve lost four Indigenous people in the past few months. They’re the ones hurting the most out here. It’s frightening.”

‘She wanted to heal’

Amanda had almost made it out of the life, according to Trish Norton, who grew up with her on the South Shore Mohawk territory of Kahnawake.

“She had been in jail for three weeks but, when she got out, she was set on getting back on the right path,” said Norton, an outreach worker at Resilience Montreal. “Amanda was staying with her brother, attending Zoom meetings with a drug counsellor, doing what she could to get healthy again.

Norton says that COVID safety measures make it “damn near impossible” to get a bed at any rehabilitation clinic. In a perfect world, Amanada would have gone to the treatment centre in Kanesatake — which has a long and successful track record of helping Indigenous patients find sobriety.

“We aren’t Canadians, we are Mohawks. But we’re neighbours too.

“This is the first time we’ve lost someone from (Kahnawake) out here,” said Norton. “It’s sad to say but when we work in a field like this, we understand that things like this can happen. People’s lives can be taken. From getting run over by a car to an overdose, somebody getting murdered. All these things have happened in the past year.

“There aren’t many ways out of the street life. You either get out or you die from it. Working this job, that’s something you harden yourself against. But when Amanda died, it hurt on another level.”

Amanda, 41, was only five years younger than Norton. She was a mother of three, a “calm, polite woman” who did her best to overcome addiction.

“No matter how hard she tried, the relapse would come,” said Norton. “She had demons. You never know what’s going on in a person’s life, you never know what pushed them to end up where they did. But I know she tried. 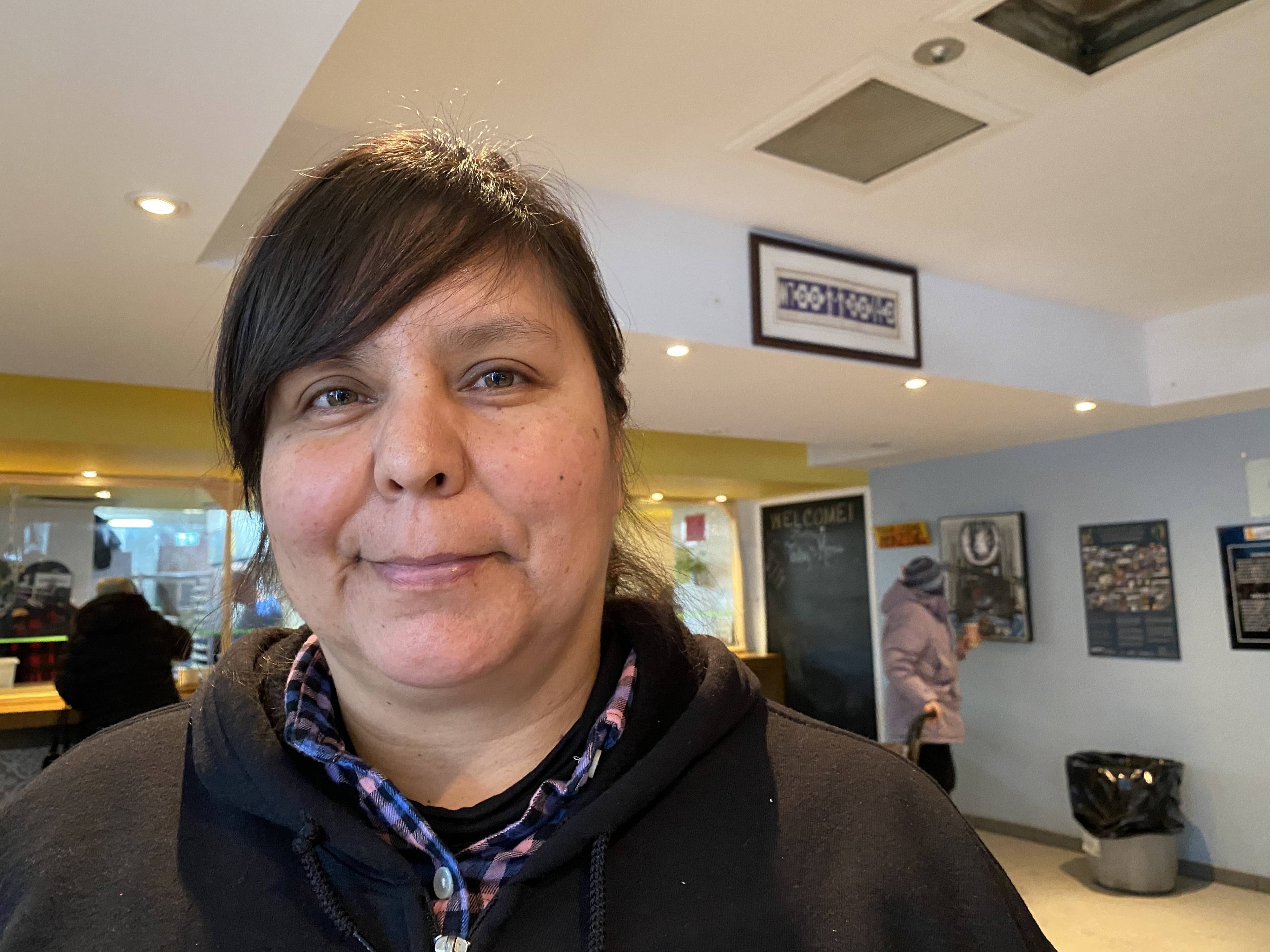 “Her last relapse, when I saw her back on the streets again, it was hard. Part of you thinks she’ll pull through, she’ll beat it, she’ll go back to her brother’s. But you also have to detach yourself from it a little bit.

“When I found out, I felt the emotions creeping up, I wanted to cry. You can’t be blubbering when you’re reaching out and telling her loved ones. You can’t break down when her friends come to you to grieve. So you just live in this unusual space, you’re grieving but you’re not really grieving.”

Just as Norton appeared to let her guard down, someone at the door began screaming, lashing out over Amanda’s death. Norton raised her finger at him and locked eyes with the man for what seemed like 30 seconds. He walked away calmly.

If the crisis has overwhelmingly affected Indigenous people, it’s also true that relief has come from people like Norton and other members of her community.

After an Innu man was found frozen to death on Parc Ave. earlier this month, Quebec’s government promised it would come up with a solution to help keep the homeless warm in Cabot Square.

Indigenous Affairs Minister Ian Lafrenière announced last week that he’d have a warming centre up by Jan. 22. The deadline passed and, six days later, still no solution from Quebec.

Lafrenière’s press attaché did not return a text message sent Tuesday by Ricochet.

But where the province has been slow to take action, Mohawks on the South Shore stepped up with a solution. Business owners Mary and Barton Goodleaf donated $25,000 to rent and operate a heated tent for those struggling on the streets of west downtown Montreal.

Another Kahnawake family put up $5,000 for the same cause.

“We are neighbours and, where I’m from, that means something,” said Mary Goodleaf, whose family owns the Host Hotel in Kahnawake. “It’s not normal that people should die on the streets in a country as rich as Canada.

This article was produced through The Rover, Christopher Curtis’s investigative journalism project with Ricochet. Sign up below for weekly newsletters from the front lines of journalism.
Carbon capture and storage: Another oil and gas subsidy?
The last of the untamed: Wedzin Kwa and the Wet’suwet’en fight to save her
INVESTIGATION: Canadian news media dominated by corporate lobbyists