Quebec promised a tent, and didn’t deliver. So a group of Indigenous women stepped in and made it happen

Jenny Hervieux white-knuckled her way from Quebec City in a storm Tuesday, arriving just as the sun set over downtown.

She spent hours dodging snow drifts and black ice so that, come nightfall, she could be on the front lines of Montreal’s homelessness crisis. And while the icy pellets battered the city, another storm has been raging in the streets since Christmas.

Three people are dead, roughly 200 have contracted COVID-19 and a tainted drug supply is killing the city’s most vulnerable people.

In the absence of a swift response from the Coalition Avenir Québec government, it is Indigenous women like Hervieux who are stepping up. She answered the call after learning that Raphael “Napa” André was found dead in a portable toilet on Jan. 17.

She is one of three workers from a Quebec City homeless shelter who volunteered to help prevent more Indigenous people dying on the streets.

“We are 11 nations in Quebec but we’re also a big family. When one of us dies, word travels fast,” said Hervieux, an Innu from Pessamit some 615 kilometres east of Montreal. “We live far away but we hear about what goes on in Cabot Square, downtown and other parts of the city. These are our people on the streets, sleeping outside.

“They come from our communities and, even in the darkest times, we stay in touch with them. Napa was Innu, he could have been any one of us.” 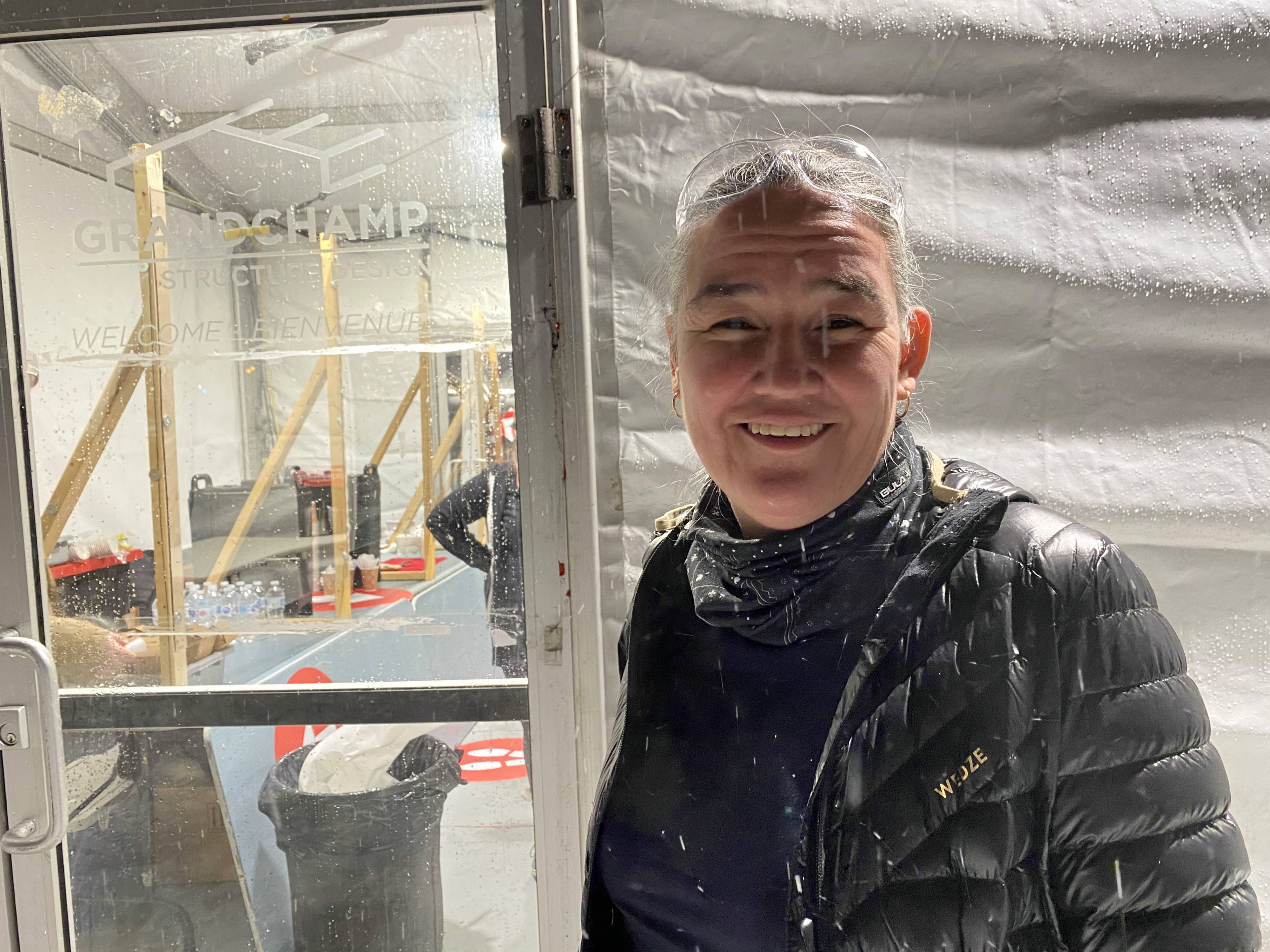 It would be tempting to write off Hervieux’s “big family” comment as hyperbole were it not for the fact that the crisis in Montreal has shown it to be true. Consider the warming tent in Cabot Square.

After Napa died nearly three weeks ago, members of the Cree, Innu and Mohawk nations worked together to create an emergency shelter in Cabot Square, a park frequented by Montreal’s Inuit. On Tuesday, a refrigerator-sized man stood next to Hervieux in the tent, trying to help an elder wash his hands.

The man, a Mohawk, speaks little French, and English is Hervieux’s third language, so they resorted to miming for the elder.

She smiled and shook her head.

The family analogy also works on a literal level.

Napa was a second cousin of Michèle Audette,a former president of Quebec Native Women and one of five commissioners in the National Inquiry into Missing and Murdered Indigenous Women and Girls.

“When someone in the community dies, there’s never any question, I will always, always, always reach out to see how I can help,” said Audette. “Where I’m from, the Innu Nation, the word we use for ourselves, the word ‘Innu’ means human. Napa was Innu, Napa was a human being and he should have been treated with the dignity of a human being.

“I still remember him from when I first came around to Montreal in my early 20s. He had long, jet black hair and all the girls at the bar wanted to talk to him. Napa had some rough years, he made some mistakes but there was kindness and love in him.”

The warmth in Audette’s voice cuts through our stuttering phone connection. In her role as a commissioner for the national inquiry, Audette travelled across Canada, collecting stories of loss and pain, carrying people’s nightmares in hopes of easing their burden.

When we spoke on the phone last week, an Indigenous woman had just died of an overdose in a motel on the industrial outskirts of Montreal. Seven days earlier, Napa reportedly froze to death outside a shelter that had to reduce its hours because of a COVID-19 outbreak. Most people would crumble under the weight of tragedies that strike so close to home.

Audette is not most people.

“I don’t want to play politics and I’m tired of being mad, tired of being tired, really, so what am I left with,” Audette says. “Solutions. I have to believe that we can appeal to people’s basic sense of humanity and get them on board to help out.”

Obstacles every step of the way

Audette started working her political contacts; Montreal Mayor Valérie Plante, a federal cabinet minister here, a member of the National Assembly there, some friendly chiefs from the Innu Nation.

Ultimately, her most reliable ally in the fight was a Cree woman whose story mirrors that of so many Indigenous folk who wind up on the streets. For lack of a better word, Nakuset was kidnapped by the RCMP as a three-year-old, taken from her mother’s territory in Saskatchewan and forcibly adopted by a white family in Montreal.

These days, she’s in charge of the Native Women’s Shelter of Montreal and — depending which politician you ask — either among the most respected or most demanding Indigenous leaders in the city.

“Nakuset, like me, she knows what it is to be a refugee in her own country,” said Audette, who was among the first generations born after the Innu were cleared from their territories to make way for the iron mines between Quebec and Labrador some 70 years ago.

“We’re all fighting this sense of alienation within our territories, within our own families, our own bodies. Who better than us to come up with a solution?”

“When you’re faced with a crisis, you can either give up or help out.”

Together, they hatched a plan to get an enormous tent from Audette’s storage locker on a Huron-Wendat reserve, put it on a flatbed truck and have it in the city two weeks ago. But the tent wasn’t up to code and it likely would have been taken down by public health authorities.

So they went back to the drawing board.

“If I had a nickel for every meeting we had to have over this damn tent, I’d have a lot of nickels,” said Nakuset. “Every step of the way, there was some obstacle we needed to get through, some piece of paperwork that wasn’t quite right, some politician who needed their arms twisted.”

Finally, they abandoned the political process and began working with a Mohawk family who offered up $25,000 to rent and operate a warming tent in Cabot Square.

“Of course, we can’t have our people dying on the streets,” said Mary Goodleaf, who donated the money with her husband, Barton. “But it’s not just our people, it’s anyone. We’re Mohawks, we’re not Canadians, but we’re neighbours and that means something.”

A hell of a team

Last week — in a meeting with the City of Montreal — the tent plan was finally approved with the city offering up some funding to help with operating costs. Meanwhile, Audette called upon Hervieux and other street workers from a Quebec City Indigenous shelter to lend a hand.

“What’s amazing isn’t just how the nations worked together on this,” said Hervieux. “It’s how the non-Indigenous and Indigenous frontline workers gave it their all. When we build bridges, we can make things happen, we can put together a hell of a team.”

The tent went up on Tuesday night.

Greg stood guard outside the white structure as sleet accumulated on his massive head. Normally, he’s a maintenance worker at the Goodleafs’ hotel on the South Shore Kahnawake territory. But when he heard people in Cabot Square needed a hand with security, he volunteered for the job.

“Once upon a time I was on these streets myself,” said Greg (not his real name). “We used to call this place Pigeon Park. People were okay, they’d help you out, make sure you had enough to eat and a safe place to squat.

“We’ve lost a lot of that sense of togetherness.”

Greg pointed to the luxury condo towers being erected across from the park.

“It’s not the same anymore,” he said. “These people don’t want to look at the poor, never mind live next to them. I find that sad.”

A lighter mood prevailed inside the tent. One man sat in a lounge chair, warming his feet by a space heater. Another, using the park’s free wifi, read a news article as he waited out the storm.

Hervieux and the other workers teased each other.

“When you’re faced with a crisis, you can either give up or help out,” she said. “I’m happy we were given the chance to help.”