But despite fewer customers, some community members still think too many visitors are coming through

While some First Nations across the country have shut their borders to outsiders in a bid to keep members safe from the spread of COVID-19, a few First Nations in southern Ontario have opted to keep their doors open, allowing essential on-reserve businesses to continue to serve the public.

The Tyendinaga Mohawk Territory is the third-largest First Nation community in Ontario, with over 2,000 members living on the reserve. Situated on the northern shore of the Bay of Quinte, it’s typically a busy little hub with restaurants, arts and crafts boutiques, gas stations and tobacco shops — as well as over 30 cannabis dispensaries.

“When you work in a small community and there’s very few opportunities, the entrepreneurs have an ethical and moral responsibility to keep people employed”

Olivia Dolan is an employee at the Pot Shoppe in Tyendinaga. Her employment began just a few months before the pandemic hit last year.

Safety has always been a priority, she said. “The territory shut down for a couple days to make sure everybody had the protocols. We put them up early, actually we already got them up, and I think customers were really happy when they saw that.”

In spite of the precautions, Dolan has noticed a significant drop in sales.

The Pot Shoppe is located on old Highway 2, just a few minutes south of the 401, one of the busiest highways in Ontario. Dolan said that many people coming and going from Sandbanks Provincial Park used to pass through, but now the store does not see “nearly that crowd.”

“I probably lost a quarter of my regular customers that I see, used to see every weekend.”

Just this week, an outbreak of COVID-19 in the Mohawk territory was announced, linked to a resident travelling outside of the local area. As of Feb. 10, three active cases of COVID-19 had been confirmed.

Ontario is in the midst of its second lockdown since the pandemic began. On Dec. 26, all non-essential businesses and in-person dining were ordered to shut down once again.

Seth LeFort, owner of The Pot Shoppe, saw a decline in sales when the Canada Emergency Response Benefit (CERB) ended in September. “I’d say it was a 50 per cent decrease overnight, because people aren’t working, they don’t have money,” he said, noting the large “number of resumes that came to the businesses every day.”

“I'm supporting 50 people, they all depend on me, we have to keep going.”

Along with taking all necessary precautions to keep employees and the public safe from contracting COVID-19, LeFort has an even greater sense of responsibility. “When you work in a small community and there’s very few opportunities, the entrepreneurs have an ethical and moral responsibility to keep people employed and try to figure out, try to help.” 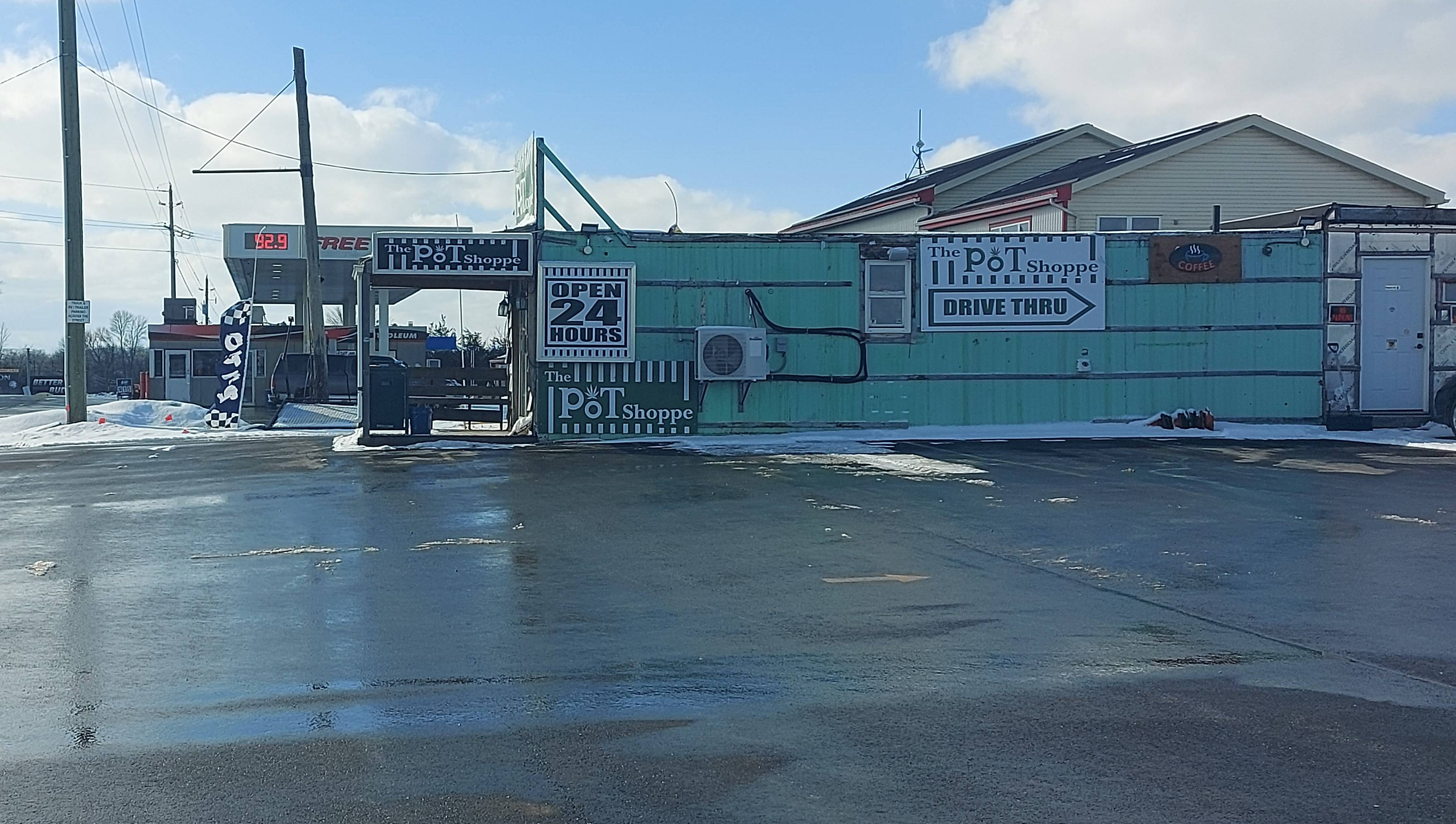 One hour northwest of Tyendinaga on the south shore of Rice Lake lies the Mississauga community of Alderville First Nation. With just over 300 members living on reserve, it’s also a community that relies heavily on small businesses.

All three businesses are located on Highway 45, which runs through the community and has been dubbed “The Green Mile” due to the dozen or so dispensaries that began popping up after the Canadian government legalized recreational cannabis in 2018.

Like LeFort, Starr feels a sense of responsibility to her employees and community. “I'm supporting 50 people, they all depend on me, we have to keep going. I always have to try and think of ways to keep the money coming in.”

Although businesses in the community continue to provide services, Council has put tighter safety measures in place. Right now only drive-through and curbside pickup are allowed.

Starr said that makes it a little tougher to sell. “We can’t bring out the products, they can’t talk to you as much about the product,” she said. “It’s kind of hard for some people to tell you what’s wrong unless you’re talking to them, and it’s hard for the boys to go out there and you’re trying to rush through it.”

Since the pandemic began, only two cases of COVID-19 have been confirmed in Alderville, but the number of daily visitors to the community has been a contentious issue at times.

Some members have had concerns over the increased traffic and the number of people coming to visit the shops, due to the fact some COVID-19 hot spots are just one hour’s drive west of Alderville.

Starr said the majority of her clients come from the local area though. “We typically took down names and most of them, Cobourg or Campbellford, Port Hope, Gores Landing, you know, our neighbours.”

Alderville Chief Dave Mowat declined to comment on the situation, stating in an email to Ricochet, “At this time, the pandemic and the vaccine are of the utmost importance to me; all else is secondary.”

In contrast to communities that have maintained a degree of openness during the pandemic, the leadership at Hiawatha First Nation has taken a different approach. The Mississauga community is located on the north shore of Rice Lake, a 40-minute drive from Alderville. With one road in and an on-reserve population of just over 200, the community is closed to all guests, and all businesses remain shuttered.

To get service at the community’s only gas station, all Hiawatha citizens must present a status card or driver’s licence as proof of residence. According to the community status report, there have been no confirmed cases of COVID-19.

The Ontario government will begin a phased reopening of the province starting Wednesday, but many regions will remain in lockdown during the second wave of COVID-19.

Annette Francis has been sharing Indigenous stories for 15 years, including as a broadcast journalist with The Aboriginal Peoples Television Network. She is Anishinaabe and lives in Alderville First Nation with her family.