One year after the historic ruling in Ontario that Foodora couriers are dependent contractors, organizers in the Greater Toronto Area are setting their sights on legislative change to improve gig workers’ working conditions.

Announced today, the Foodsters United campaign has been relaunched as Gig Workers United. The name change also comes with a broadened scope, as organizers seek to support all app-based delivery workers in the GTA.

First launched in summer 2019, the Foodsters United campaign fought to unionize Foodora couriers in the GTA with the Canadian Union of Postal Workers. Along the way, it brought about the Ontario Labour Relations Board’s landmark decision in February 2020 that Foodora couriers were dependent — not independent — contractors, which affirmed their right to unionization.

“Legislation has not kept up with the pace of technological change.”

But that win was bittersweet, as Foodora pulled out of Canada three months later. The company cited profitability issues, despite posting surging first-quarter revenues in 2020.

“The Foodsters have broken many barriers to become the first app-based workers in Canada to form a union, but the fight doesn’t stop here,” said Jan Simpson, national president of CUPW, in today’s press conference. 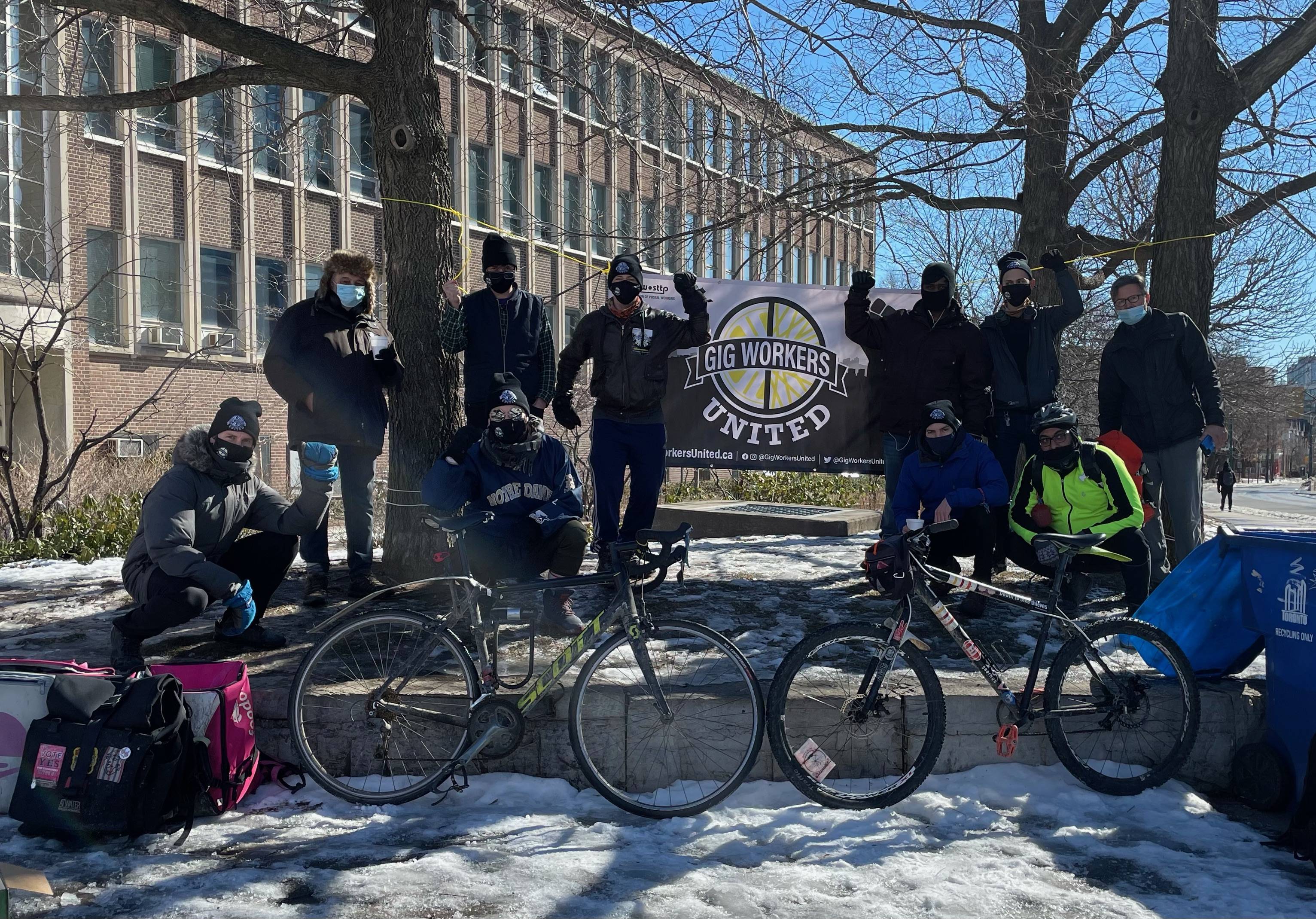 Gig Workers United distributing masks and union gear for app-based delivery workers in Toronto today, one year after winning a historic ruling at the Ontario Labour Relations Board.
GWU

“Legislation has not kept up with the pace of technological change,” said Brice Sopher, an organizer and courier with Uber Eats, at the press conference.

“It's time that … our politicians wake up and make those changes and address them now because an increasing segment of the population is going to be subject to this situation. So if we don't stop it now, then we're going to have a much more impoverished population.”

Organizers added that the COVID-19 pandemic has increased the importance of this call for change. Narada Kiondo, a bicycle courier with a number of food delivery apps, said at the press conference that besides facing a higher risk of infection as a frontline worker, couriers often don’t have access to washrooms. The job is also physically taxing, making all paid sick days important for gig workers, organizers said.

With workplaces contributing to the spread of COVID-19, there have been calls for Ontario to provide paid sick days. But the Doug Ford government has repeatedly put the onus on the federal government, despite federal employment minister Carla Qualtrough saying that a provincial program would not duplicate what Ottawa currently offers.

“We should all be demanding that we be paid better.”

At the same time, some couriers such as those with Uber Eats said they have faced a gradual but significant base-pay cut over the past year, which could go as low as $3.99 per trip. Uber previously told The Canadian Press that the change was made to “better reflect each trip's total time, effort and distance and include travel to the restaurant.” The company said couriers could turn down trips with prices that are too low for them.

“It's a major slap in the face for myself and all the gig workers out there who are putting their lives at risk and their health at risk delivering food and groceries while everyone else is being told to stay at home,” said Kiondo.

When asked about the idea of basic income, organizers said it would help on a day-to-day level when coupled with paid sick days. But they view it as a stopgap measure.

“[The industry] is exploitive and extractive,” said Arash Manouchehrian, a delivery courier, at the press conference. “We should all be demanding that we be paid better.”

With its relaunch today, the Gig Workers United campaign coincides with a quickly growing organizing effort around the world by gig workers. For instance, the U.K.’s Supreme Court recently ruled that Uber drivers are workers instead of self-employed contractors. And while the campaign’s current focus is on the GTA, organizers said their ambition is bigger.

“This is an industry problem and it's a national problem,” said Sopher. “So the scope is ultimately to change the industry and to improve lives for all gig workers going forward. That is our aspiration.”