TMX: ‘We’re being criminalized on our own territories’

A wave of direct action against the Trans Mountain pipeline expansion project — led in particular by Indigenous land defenders — has been growing in B.C.’s Lower Mainland in the past few weeks.

Most recently, around 50 Indigenous land defenders and climate activists marched for 5 km from the TMX construction site to the Watch House’s site on March 10. Three years ago on that day, Indigenous groups launched the Watch House near the Burnaby Mountain tank farm to monitor work being done on the project.

More people later joined at the destination, bringing the number of attendants above 100. 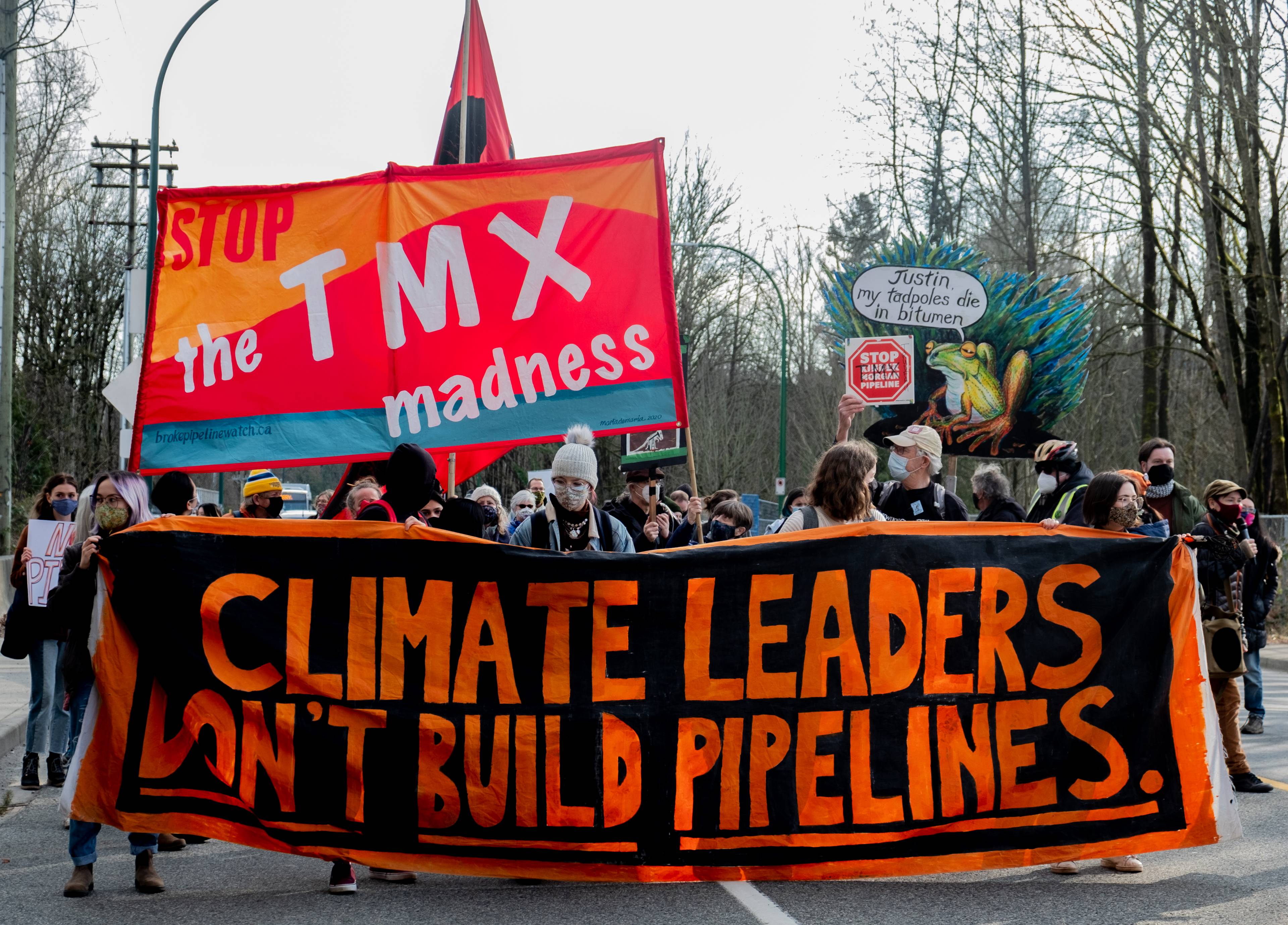 Around 50 Indigenous land defenders and climate activists participated in the march.
Alex Nguyen

“I’m honoured to have this many people standing safe together and they have the same concerns as we do: the threat of this pipeline coming here,” Will George, a member of the Tsleil-Waututh Nation who has been a leader in the movement and the Watch House’s guardian, told Ricochet.

“These people are really heartfelt.”

Organizers added that the march and the gathering were also about uplifting spirits, as they noted the long road ahead in the fight against TMX.

“We wanted it to be empowering,” Roxanne Charles-George, a Semiahmoo First Nation member, organizer and wife of Will George, said in a speech. “We wanted it to touch each and every one of you because we've got quite a bit ahead of us.” 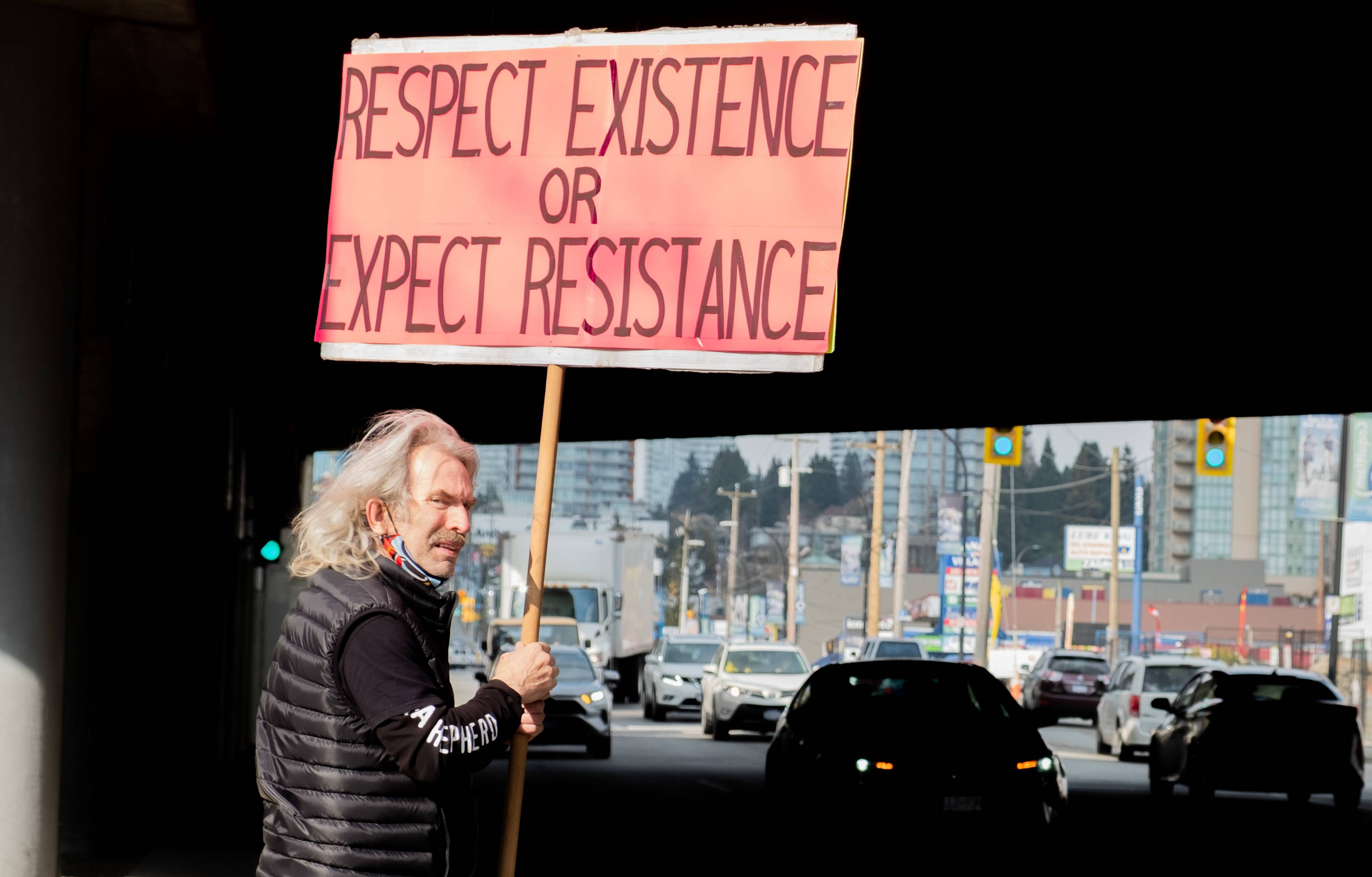 A protestor stood with a sign next to the TMX construction site, the starting point of the march.
Alex Nguyen

With Keystone XL’s cancellation in January, the federal government has pivoted to put more focus on completing the TMX project, which would almost triple the current pipeline’s delivery capacity and lead to a seven-fold increase in oil tanker traffic.

Ottawa owns TMX, having bought it in 2018 from Kinder Morgan for $4.5 billion — though the government plans to sell it back to the private sector once the project is completed. Since that purchase, the project’s cost has ballooned to at least $12.6 billion, an estimate that Trans Mountain released in February 2020. But climate groups have pointed out that this figure was released months before the company had to undergo a weeks-long project-wide work stoppage because of concerns around a worker’s death and a worker’s serious injuries. 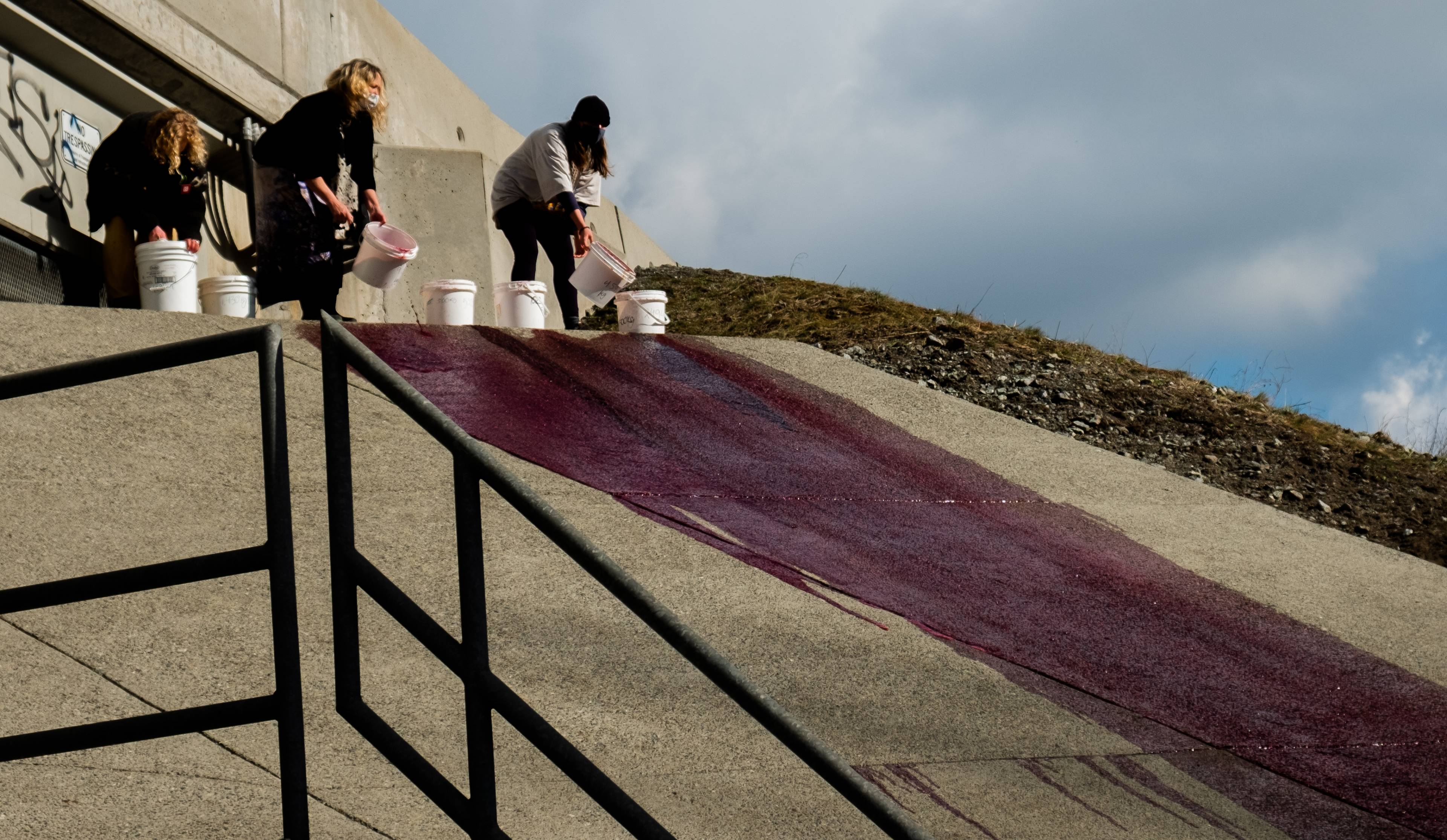 Activists poured a mixture of crushed beet, water and cornstarch down the side of the overpass opposite of the TMX construction site. A speaker said it served as “a symbol of the blood that pours from our loving relatives as we destroy ecosystems' biodiversity.” The action accompanied a die-in, where the crowd lied on the street and blocked traffic — which the speaker called “an act of defiance.”
Alex Nguyen

At the same time, organizers said they want the march and gathering to raise hope in the face of ongoing criminalization, incarceration and brutalization of Indigenous land defenders.

Earlier this month, the B.C. Supreme Court sentenced Indigenous land defender Stacy Gallagher to 90 days in jail for breaching an injunction against protests at TMX sites. Besides noting that Gallagher had remained peaceful, his supporters pointed out that his jail sentence undermines a new directive that says incarceration should be the “last resort” for Indigenous defendants charged with minor crime.

“We’re being criminalized on our own territories,” Charles-George told the crowd.

"The work that [Gallagher] does is meant to keep us safe, and he was arrested for smudging and drumming and singing and taking care of us.” 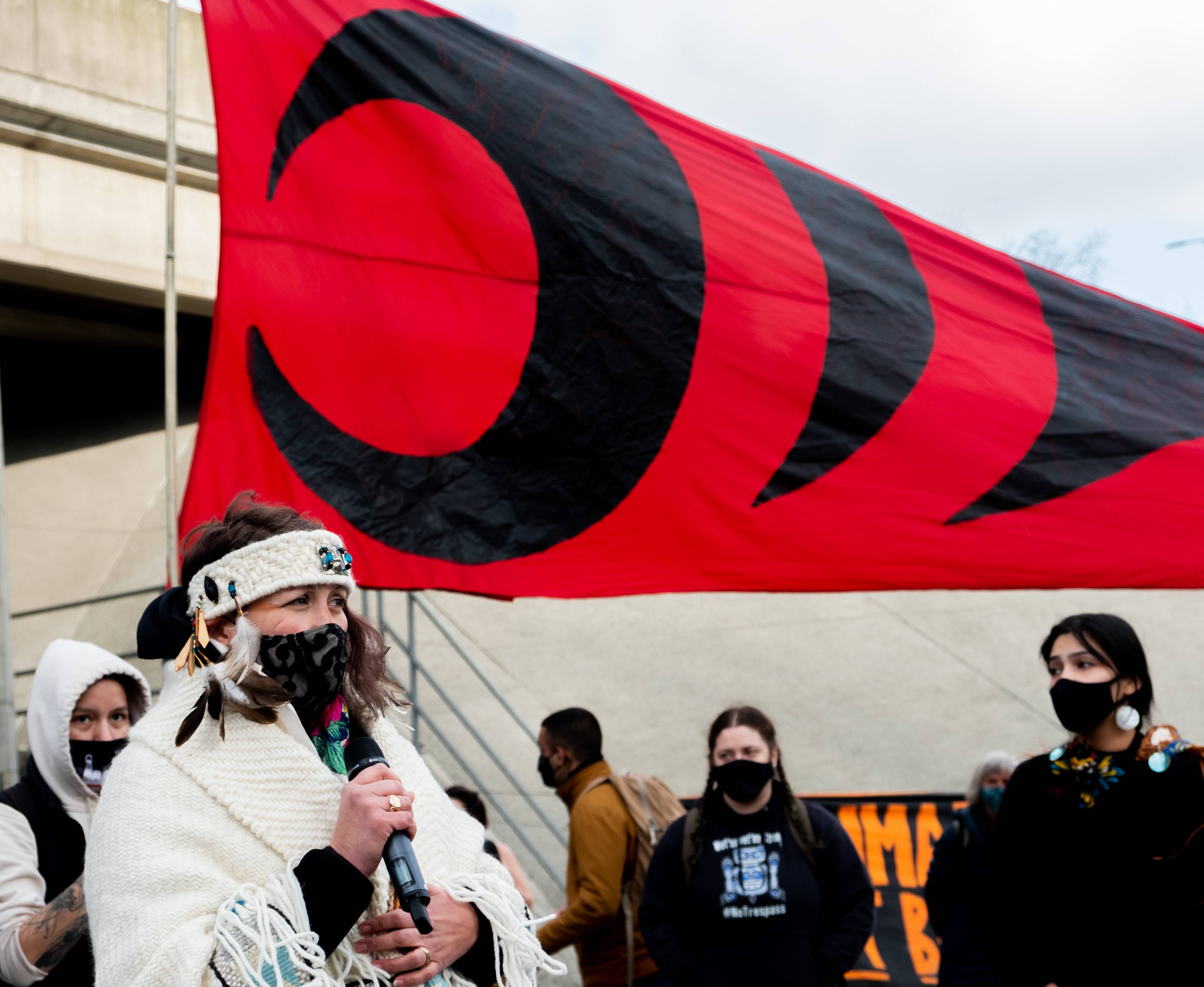 Roxanne Charles-George spoke to the crowd on the street next to the TMX construction site.
Alex Nguyen

Gallagher’s sentence also prompted the Braided Warriors, a group of Indigenous youth from different communities focused on land defence, to hold a day-long peaceful blockade last week at a key intersection leading to Vancouver’s port. But by the evening of March 3, Vancouver police officers forcibly removed the blockade and arrested four individuals. They were released later that evening, but with orders to appear in court, according to Victoria News.

“We pour so much into this movement and it's really exhausting, so now it's time for us to take care of ourselves culturally.”

Four members of the Braided Warriors also faced violent arrests last month after they held a sit-in at the Vancouver headquarters of AIG Insurance, a TMX insurer. Online footage shows police officers forcibly removing individuals, including pulling one’s hair and throwing another to the ground. While the Vancouver Police Department told CBC the video doesn’t provide complete context, it also said the police conduct captured in the footage will be subjected to an internal review.

But Indigenous land defenders are not alone. Climate and multi-faith groups have also been protesting the project by marching, tree-sitting and holding prayer circles at the TMX construction site in Burnaby. 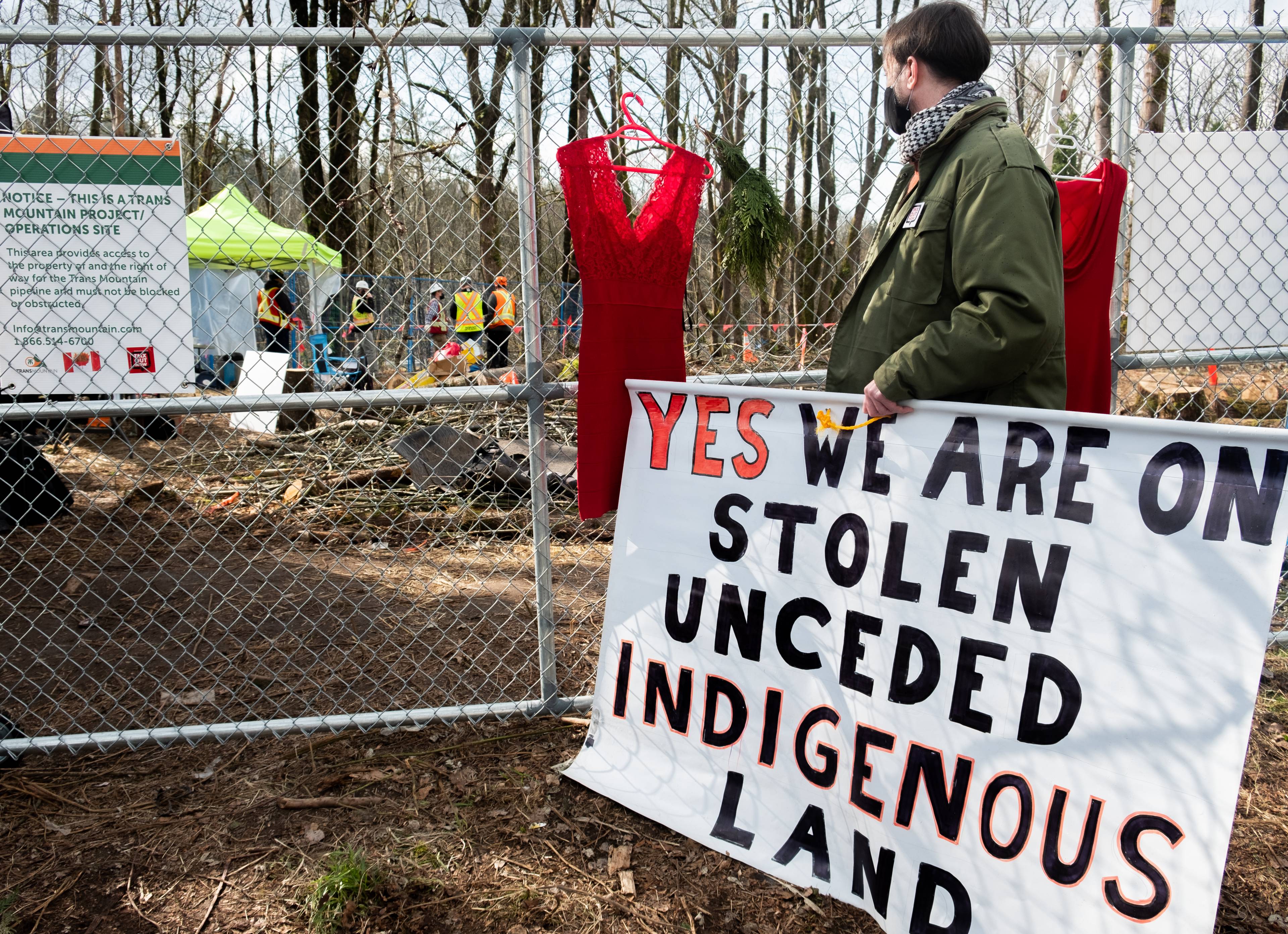 Looking ahead, George said it’s important for land defenders like him and his wife to take the fight back to their cultural roots.

“We pour so much into this movement and it's really exhausting, so now it's time for us to take care of ourselves culturally,” he said in an interview with Ricochet.

“That's how we did this three years ago, we started in our ceremonies and it's time to go back to that for now. The Tsleil-Waututh Nation spent years in court and lost at the highest court level. It’s incredibly difficult. It's a big fight we have, but we're strong people.” 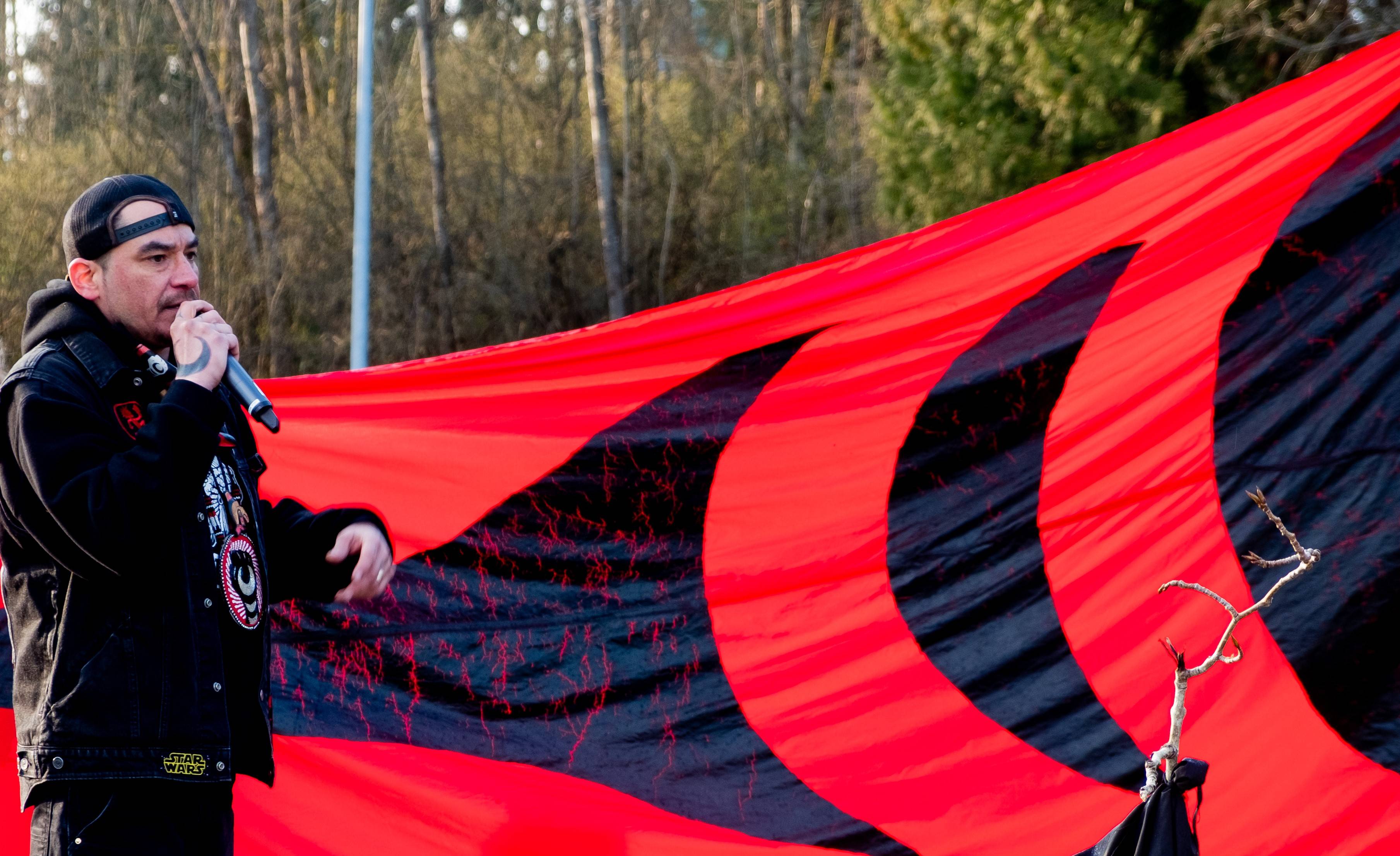 Will George spoke to the crowd at the site of the Watch House, the end point of the march.
Alex Nguyen
As a top polluter, what is Canada’s responsibility to humanity?
The Dirty Dozen: ‘Carbon bombs’ threaten to blow up Canada’s climate commitments
I was raised in an Indigenous community — but even that doesn’t make me Indigenous