After bringing people together, the big white tent will be dismantled — and many don’t know where they’ll go

She came in from the storm drenched in sleet, carrying everything she owned in two pieces of luggage.

“Merry Christmas!” one of the workers exclaimed, as the April blizzard raged outside the tent. “And a Happy New Year.”

They handed her a boxed meal, cup of coffee and a ziplock bag with four cigarettes inside. She made her way to a chair so she could eat and wait out the storm inside.

“I’m not here for long. I’ll be back on my feet when the cheque clears,” the woman said, clearing the wet grey hair from her forehead. “Just a few weeks.”

She was the first of over 100 people who made their way to the tent at Cabot Square Wednesday in Montreal. The tent has been an oasis from the streets for hundreds of people these past two months. Advocates say it saved lives at a time when homeless resources across the city had to shut down because of COVID-19.

But come May 1, the tent will be packed onto a flatbed truck and driven away. No more overnight services in west downtown. Emergency funding has dried up and with warmer weather around the corner, there’s no risk anyone will freeze to death overnight.

“We all have a heavy heart,” said Alexandra Ambroise, who is in charge of the warming centre. “It was supposed to just be up for two weeks, but we quickly realized there are a lot of people hurting out here. We couldn’t leave them to fend for themselves.

“So two weeks became a month, then two, but that’s as far as we could push it.”

Though statistics aren’t available, there’s a consensus at city hall that homelessness has spiked dramatically since the beginning of the pandemic. Last winter, Mayor Valérie Plante said it’s possible the homeless population doubled to about 6,000 over the past year.

Samuel Watts, who runs the Welcome Hall Mission, says those numbers are just a guess but agrees there’s been a noticeable rise in poverty since last year.

“The economic effects of COVID-19 have created a cascading effect that pushed more people into poverty, and many who were already on the margins wound up outside,” said Watts in an earlier interview.

The tent started as a response to the death of Raphaël Napa André, whose body was found in a portable toilet last January. The 51-year-old Innu man couldn’t go to his usual shelter that night because a COVID outbreak had forced it to shut down. Instead he spent his final hours in the cold, slowly freezing to death.

First Nations across Quebec pitched in to give people like Napa a fighting chance. The Innu sent street workers from Quebec City, the Mohawks provided security, cash and thousands of warm meals and Cree leader Nakuset negotiated with the City to get the proper permits lined up.

They called it the Raphaël Napa André Memorial Tent. It was a resounding success.

But on Wednesday night, people who use the tent struggled to think of where they’ll go come next week. 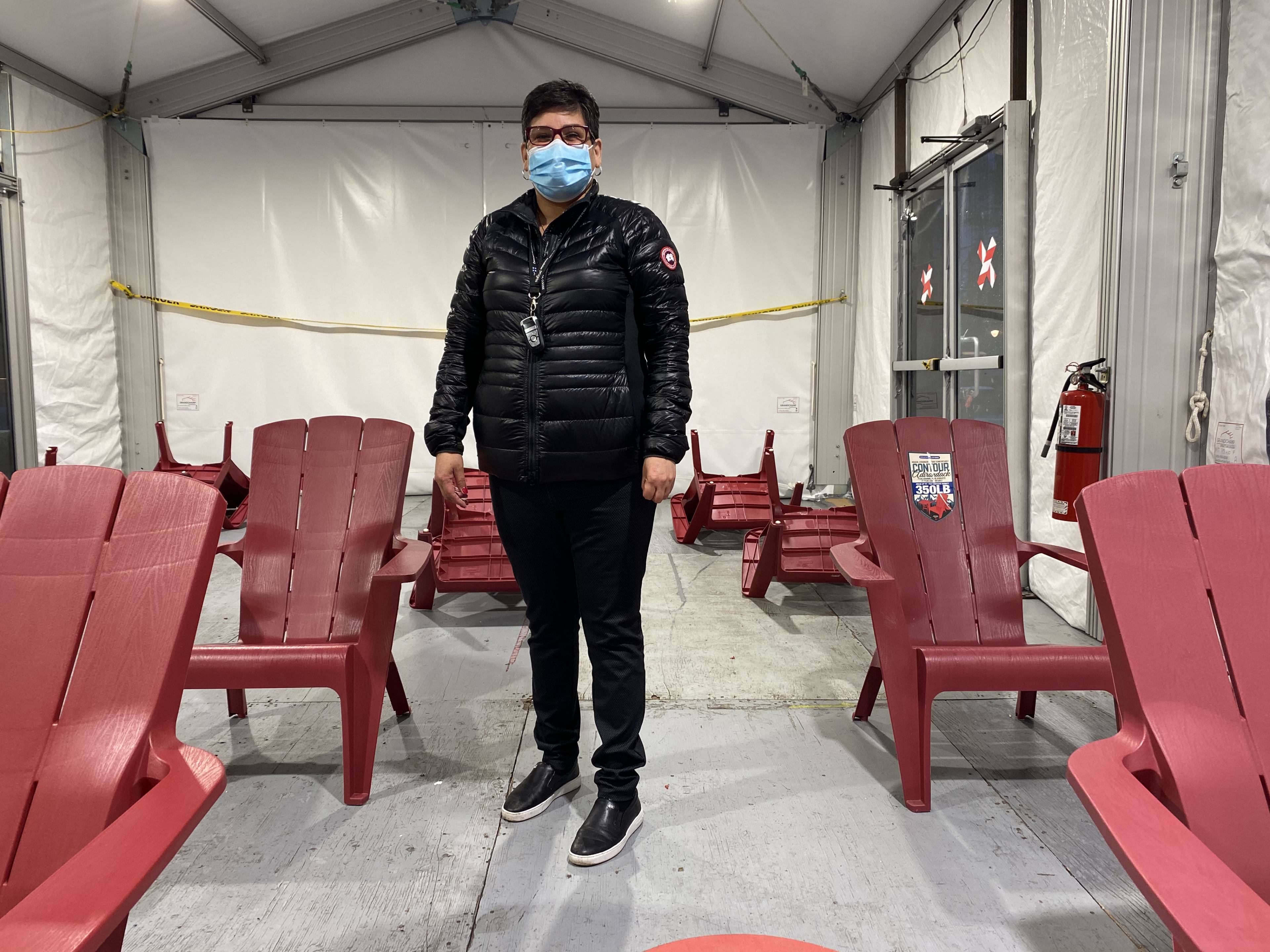 ‘People disappear back into the shadows’

Matthew has lived with chronic pain since he broke his back in a West Island car wreck decades ago. He says it’s hard to live a normal life when you’re “morphined out” most of the time.

“My buddy at the time wanted to scare us so he swerved his Chevette sharp and we started barrel rolling,” he said. “Did seven barrels, kissed every side of the car and I was thrown 150 feet out the back window. I used to be six foot four but I’m three inches shorter now. That’s how badly my spine was broken.

“I live with pain. Every day. I need all the help I can get just to survive out here. I dunno what I’ll do after this place closes, but it’s a goddamn shame it won’t be here after next week.”

His friend, Mary, just bought a ticket home to Salluit, an Inuit village on Quebec’s northern coast. Though she won’t be here after the tent comes down, she says it’s kept her safe in a place that can be dangerous for Indigenous women.

“I was freezing all day in this little coat but they just gave me a winter jacket,” Mary said. “I feel like I have people who listen here. There’s never been anything like this before.”

At least three homeless Indigenous women in the neighbourhood died this winter, two of an overdose and one from heart failure. This was before the tent went up.

Around Christmas, there were reports of a man prowling the streets to try to abduct Inuit women, according to two street workers who spoke to Ricochet.

About half the people who frequent the Atwater Ave. park are Indigenous and, before the overnight shelter emerged, some Inuit women opted to stay with an abusive partner instead of taking their chances outside.

The tent was a way out of that life.

“Having the tent here is a great way to keep tabs on our women,” said Nakuset, who runs the Native Women’s Shelter of Montreal. “The biggest danger of losing a resource like this is that people disappear back into the shadows. You can’t help people if you can’t find them.”

The staff at Cabot Square is almost entirely Indigenous. Mohawk men from the South Shore provide security, volunteers shuttle in meals from a kitchen across Atwater Ave. and two Innu women get people set up when they come in from the cold.

“I’ve never seen anything like this in Montreal,” said Ambroise, a former cop on Innu territory who is studying law in the city. “I can’t imagine what’ll happen when it’s over.”

Though the jump in homelessness is undeniable, the Coalition Avenir Québec government will only begin funding new social housing units in three years, according to the budget it passed last month. And the 500 units the government promised are around a thousand shy of what is needed.

Clients and staff at the tent shelter
Christopher Curtis

‘Not knowing what will happen to them’

Cathy is in her 50s but she’s new to the streets. Her landlord evicted her from her St-Henri apartment last year to renovate the unit and increase the rent. She slept at a shelter last weekend, at “an old man’s house” Monday and outside on Tuesday.

“I’ll just keep cycling in and out of the tent until the curfew is over at 5 a.m.,” Cathy said, taking a drag of her cigarette. “Tonight, it feels like I’m gonna die on the streets. I don’t want to but I feel it inside me, I have an infection and the doctors can’t find it. But I can feel it in my stomach.

Cathy is a client at Chez Doris, a women’s resource centre a few blocks from Cabot Square. “Right now, I have this tent. Maybe I’ll find some other place but it’s hard not to feel trapped out here.”

As snow and freezing rain battered the city, most everyone retreated to the comfort of their homes after Montreal’s 8 p.m. curfew came into effect. Outside, a fleet of UberEats delivery cars whizzed by the park, but otherwise the streets were empty save for the hundred or so people forced to rough it overnight.

“The scariest part of this is building a connection to people and then not knowing what’ll happen to them,” said Ambroise. “I am proud of what we were able to do here. My mom passed away last year and I think of her a lot these days. I feel her kindness in me, and I think she’d be happy to see what we’ve done out here.

“That’s something that comforts me and I need that because it’s hard to stay hopeful right now.”

This article was produced through The Rover, Christopher Curtis’s investigative journalism project with Ricochet. Sign up below for weekly newsletters from the front lines of journalism. 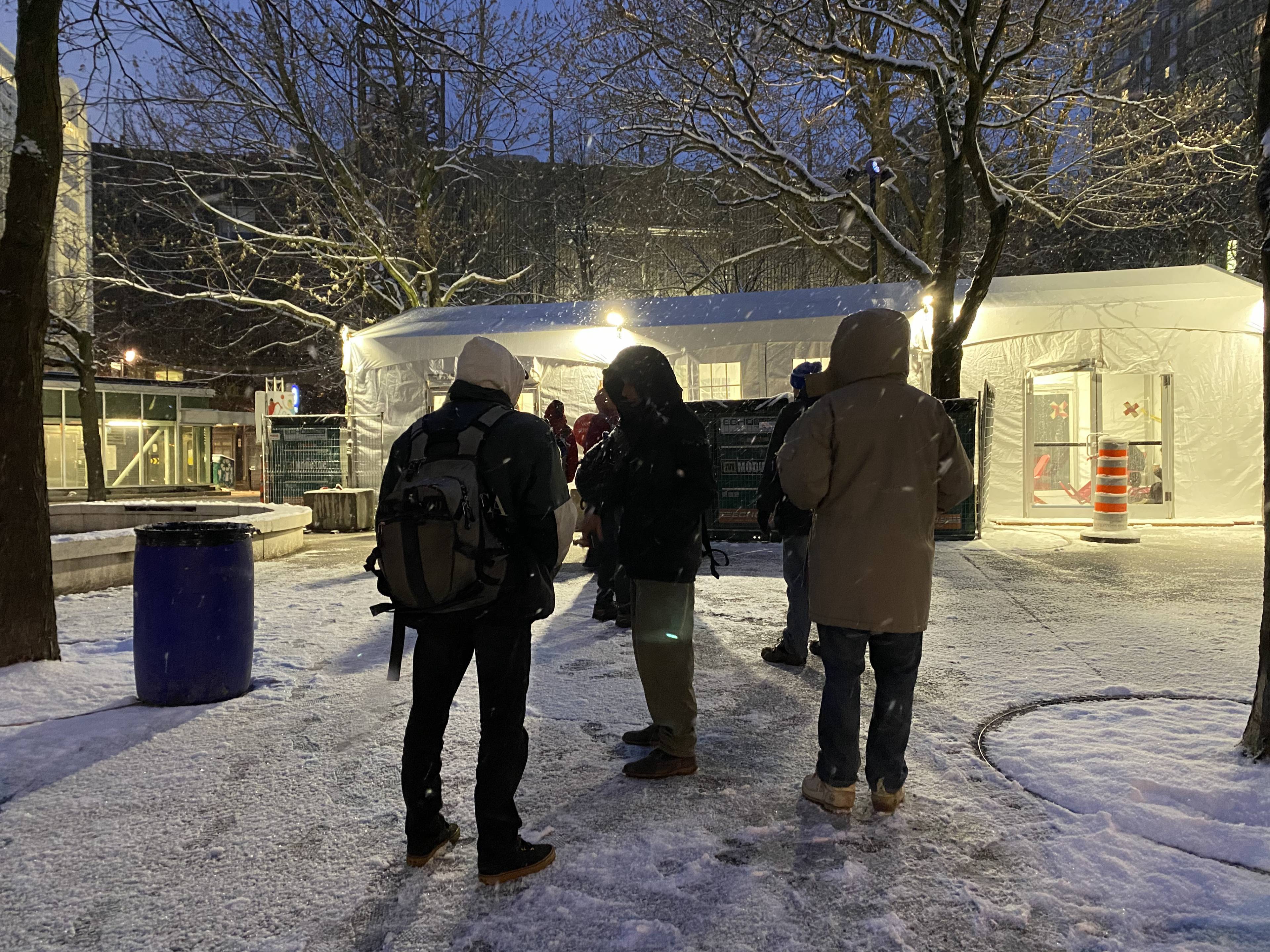 People wait to enter the tent
Christopher Curtis
As a top polluter, what is Canada’s responsibility to humanity?
The Dirty Dozen: ‘Carbon bombs’ threaten to blow up Canada’s climate commitments
Salmon is life: a lesson in Indigenous education