Despite more than 50,000 civilian deaths and 4.5 million in dire humanitarian need, the Trudeau government has barely addressed the conflict

News by
Ruby Asgedome
May 6, 2021
Protest against the war in Tigray organized by Tigrayan youth in Toronto, March 25, 2021. By Maya Ent.
Your ad here
Automated ads help us pay our journalists, servers, and team. Support us by becoming a member today to hide all automated ads:
Become a member
Share this
0 Comments
Share this
0 Comments

“My sister was mid-flight to see our sick mother when war was declared on our hometown,” says Haftom Reda, an 18-year-old Tigrayan Canadian who moved to Canada when he was eight years old.

Last October, Haftom and his family in Canada were notified that his mother, who was living in Tigray, Ethiopia, had fallen ill. Unfortunately, it was the middle of his school semester so he sent his sister to check on their mother. During her flight, on Nov. 4, 2020, war broke out in Tigray, Ethiopia’s northernmost region.

Now entering its sixth month, this ongoing war began when Ethiopian Prime Minister Abiy Ahmed launched a military offensive against the Tigray People’s Liberation Front (TPLF), the ruling party in Tsigray, which has been at odds with the federal government and asserted its right to self-determination. Abiy claimed that the TPLF attacked a government military base located in Tigray’s capital of Mekelle.

What now unites the two governments is a shared hatred of the TPLF.

Haftom’s sister made it to the Ethiopian capital, Addis Ababa, but then “was told by an Ethiopian airline employee that the airport in our hometown was burned down,” says Haftom. This wasn’t true, but the airline had cancelled her flight from Addis Ababa to Tigray and this was the reason officials gave, he says. The TPLF and Ethiopian government have offered conflicting accounts throughout the war, which have been further muddled by misinformation on social media.

For more than 40 days, Haftom and his family in Canada could not make contact with family members in Tigray due to a communication blackout imposed on the region by the Ethiopian government.

As a result of the war, over 2 million people have been displaced, with tens of thousands fleeing to neighbouring Sudan. Meanwhile, 4.5 million people — which means the majority of people in the region — are in dire need of humanitarian aid, particularly food. Many areas now have no running water or electricity.

The war has affected not only those in Tigray but also thousands of people worldwide who have family members in the region.

Haftom recalls the first message he received from Tigray after the war started. “They told us that hospitals were at full capacity holding the wounded and soldiers, so there was no way to treat my mother,” he says. A day later, Haftom and his family were informed that his mother had passed away in Tigray.

“It was a very difficult thing to handle, but in my case, my mom was laid to rest peacefully in her home,” says Haftom. “Many victims of the war were not given this.”

Canada has little to say

More than 50,000 civilians in Tigray are estimated to have died since the outbreak of the war.

Despite this death toll, the war on Tigray has received scant attention from Canada’s government.

Canada has provided some money for humanitarian aid, but Tegaru Canadians have expressed disappointment that the federal government has not taken a strong stance against the war crimes being committed by Ethiopia and other forces involved in the conflict. (“Tegaru” is the plural of “Tigrayan,” referring to people from Tigray.)

“I’m not really impressed with Canada’s response. Trudeau released a one-page statement and only the bottom of the page addressed the situation in Tigray,” says Feben, a Tigrayan Canadian who was born and raised in Ottawa and asked that her last name be withheld due to safety concerns for herself and her family.

The Feb. 25 statement notes that Prime Minister Justin Trudeau spoke with Prime Minister Abiy on “the importance of humanitarian access and human rights in the Tigray region.”

Aid agencies warn that because of impediments to accessing Tigray, millions in the area are facing starvation. Some observers describe this as a policy of deliberate famine on the part of the Ethiopian government.

“Every week we send out emails to different MPs to see if they’re aware of what’s going on and then we demand that the government act now.”

On April 2, a statement from the G7 countries, which includes Canada, called for an end to the killing of civilians and sexual and gender-based violence in Tigray.

“We want Canada to release a public statement condemning what’s happening in Tigray and [demanding] a UN-led investigation,” says Heaven, a Tigrayan Canadian who also asked her last name be withheld due to concerns for safety.

Reports of human rights violations and war crimes are mounting. Large-scale sexual violence has been described by women and children in Tigray, who have reported being brutalized and gang-raped by invading government troops and their allies. On Feb. 26, Amnesty International released a 24-page report on the Nov. 19–29 massacre in Axum, Tigray, committed by Ethiopian federal troops and their Eritrean allies.

The UNHCR and state-funded Ethiopian Human Rights Commission have said they will jointly investigate. There has been global concern that the commission will not be able to independently investigate war crimes committed by a government that finances them.

The UN Security Council recently put out its first public statement of concern about the war. Médecins Sans Frontières has reported that Tigray’s health system has “almost completely collapsed” as a large number of hospitals have been attacked or occupied by soldiers, who have also taken over ambulances to use for transporting goods.

In the absence of action from Canada’s government, Tegaru Canadians have mobilized.

Feben is one of the founding members of United Tegaru Canada (UTC), which is using social media to bring attention to the humanitarian crisis in Tigray.

“We’ve done a lot of Twitter campaigns. We just had one in March, which was #TrudeauFailedTigray,” says Feben. The hashtag amassed over 100,000 tweets.

The group has also teamed up with Omna Tigray, a new nonprofit working internationally to advocate for unrestricted humanitarian aid and an end to the war in Tigray, which it describes as a genocide.

“Whenever we have any type of social media campaign, we discuss it with Omna and they help amplify it,” says Feben.

UTC volunteers are also reaching out to Canadian MPs, sharing personal stories and spreading information. “Every week we send out emails to different MPs to see if they’re aware of what’s going on and then we demand that the government act now,” says Feben.

In the meetings UTC has been able to arrange with MPs, they have shared information about the violence the people of Tigray are facing. “We’ve talked about the gender-based violence, sexual assault, mass killings and looting,” says Heaven. 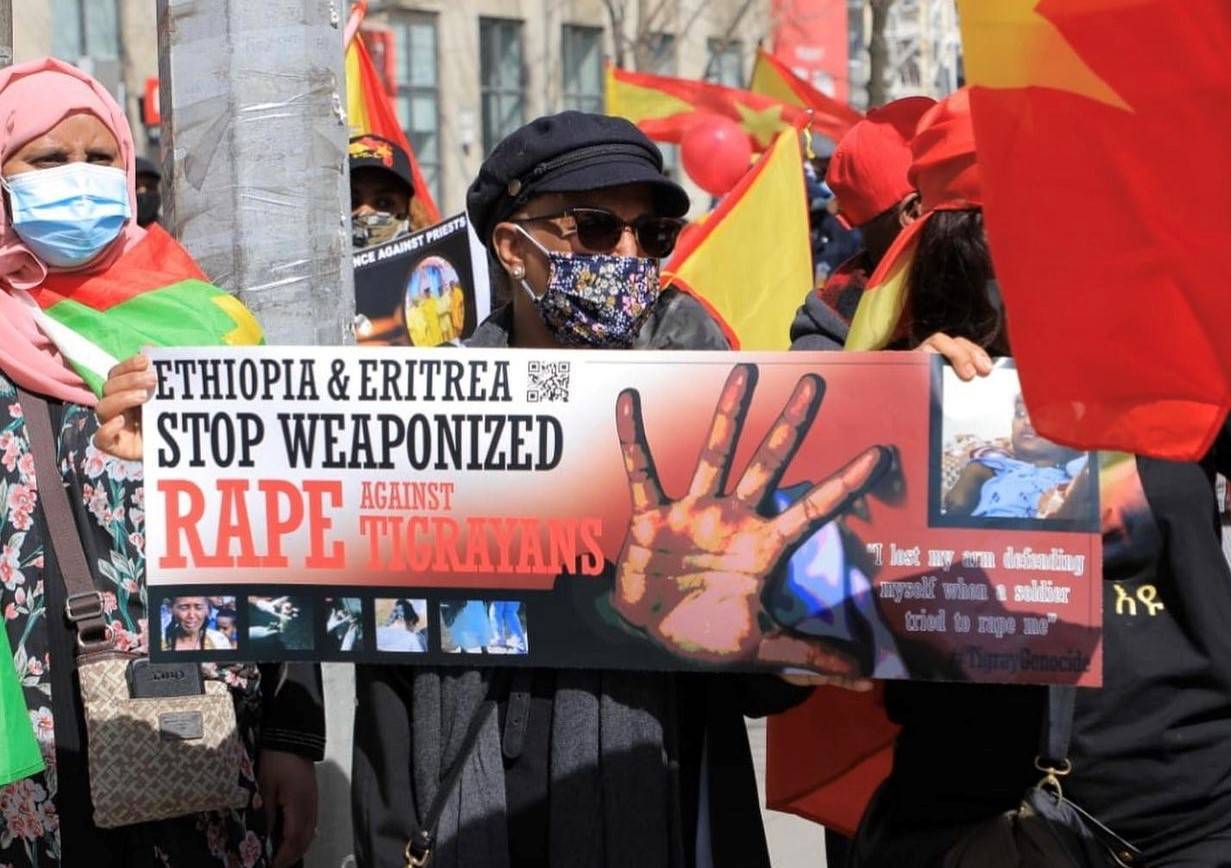 Protest against the war in Tigray organized by Tigrayan youth in Toronto, March 25, 2021.
Maya Ent

Many Tegaru Canadians have also organized peaceful protests across the country to inform others and the government about the atrocities occurring in Tigray.

“I’ve been part of the organizing team for multiple protests in Toronto and we’ve had a bunch of people show up,” says Haftom.

The Tegaru community has also received support from Eritrean-Canadian allies, in spite of the many decades of political and geographical conflict between the neighbouring countries of Eritrea and Ethiopia, which has sometimes led to tensions between their respective diasporic communities.

“I feel for Tegaru people the same way I feel for Eritreans. Nobody should be suffering but we [Eritreans] have the opportunity to stop the suffering,” says Betty, an Eritrean Canadian in Toronto.

An alliance between enemies

Part of what has motivated Eritrean Canadians to actively oppose the war in Tigray is the military intervention by Eritrea — on the side of its former colonizer.

Since the early days of the war, there have been reports of Eritrea’s army fighting in Tigray with Ethiopian federal troops. After months of denials from both sides, on March 23 Abiy finally confirmed the Eritrean army was in Tigray.

This could mark a turning point in the region, given the long history of hostility between the two countries.

Ethiopia proudly celebrates that it was never colonized, despite Italian efforts. In contrast, Eritrea was a colony of Italy, then Britain, before being given to Ethiopia after World War II.

After 30 years of armed struggle against the Ethiopian government, Eritrea gained independence in 1993, but relations remained poor.

What now unites the two governments is a shared hatred of the TPLF.

In 1998, when Ethiopia was ruled by the TPLF, the two countries went to war over the region of Badme. Despite a peace agreement under which an international commission decided in 2002 that the disputed area should go to Eritrea, Ethiopia refused to relinquish the site and the conflict continued, with tens of thousands killed.

After Abiy came to power in 2018, he announced that Ethiopia would release Badme to Eritrea.

However, that transfer was hindered by the TPLF, which claims the area and has a particularly acrimonious relationship with the government in Eritrea. When the war in Tigray broke out, Badme still had not been transferred to Eritrea.

Shortly after Abiy’s public admission that Eritrean soldiers were in Tigray, Eritrea said it would withdraw its troops, which have been accused, by credible sources, of massacring and raping people in the region. But experts say there are no indications that it will do so.