A new “war in the woods” may be taking shape in B.C. Ricochet is on the ground as a remote protest blockade faces threats of arrest.

This morning the RCMP in British Columbia established what they’re calling a “temporary access control area” on Vancouver Island just north of Carmanah Walbran Provincial Park, home to some of the oldest trees in North America.

It’s the latest flashpoint in an escalating fight over old-growth forests in B.C., where old-growth logging approvals have accelerated despite promises from John Horgan’s NDP government to step up protection of ancient forests.

The “temporary access control area” puts the RCMP one step closer to enforcing an injunction against the Rainforest Flying Squad, a group that came together last summer to block old-growth logging on traditional Ditidaht and Pacheedaht territories on the southwest coast of Vancouver Island. Most participants have come from around Vancouver Island and mainland B.C., and the group says it is committed to non-violence.

The activists operate out of a series of barricade camps preventing loggers from accessing stands of old-growth forest. Their home base, called River HQ, is the most accessible to normal vehicles. Other outposts, like the Caycuse blockade targeted by today’s measures, are deep in the woods, where there is no cell service or wifi, and communicate with the outside world via satellite phone.

“They called it an exclusion zone,” said Jade, a police liaison for the activists at Caycuse blockade, who spoke directly to the RCMP Division Liaison Team when they were on site this morning. “They gave us a map with a square on it, which seems completely arbitrary as the square is within the injunction zone,” added Jade, who did not provide a last name.

An injunction for the removal of any impediment to logging in the area was issued at the request of Teal-Cedar Products Ltd., a subsidiary of Teal Jones Group, on April 1 by B.C. Supreme Court Justice Frits Verhoeven.

Last year, Ricochet reported from behind the lines of the RCMP exclusion zone established in advance of police raids on Wet’suwet’en territory. The use of these exclusion zones, now called “temporary access control areas,” during the enforcement of injunctions was examined by the RCMP’s Civilian Review and Complaints Commission, which found the police lacked the legal authority to restrict access in this way and described them as “impermissible.”

“We’ve been told that the police intend to only come to this one camp, Caycuse camp,” said Kati George-Jim, granddaughter of Bill Jones, a Pacheedaht Elder who supports the Rainforest Flying Squad in their opposition to old-growth logging.

George-Jim spoke with Ricochet via satellite phone from the Caycuse blockade, where at 8:15 a.m. today police issued a 24-hour warning about enforcement of the injunction.

“If people comply with the injunction they will be permitted to peacefully protest, but those that do not comply will be arrested and removed from the territory,” said George-Jim, repeating what the police told her. “They’re alluding to an exclusion zone, but they haven’t explicitly said that is what this is.”

The RCMP have set up their checkpoint at the intersection of Caycuse Main and McLure Main logging roads on traditional Ditidaht territory, the main travel route between the blockade sites.

The Pacheedaht First Nation does not support the blockades, although some in the community are participating in them, and issued an open letter asking protesters to leave in April.

“All parties need to respect that it is up to Pacheedaht people to determine how our forestry resources will be used,” said Chief Jeff Jones and Hereditary Chief Frank Queesto Jones in the letter. The neighbouring Ditidaht First Nation has not made any public statements on the matter.

According to Jade, the RCMP “said that industry was not going to be directly behind the arresting officers,” which was what occurred on Wet’suwet’en territory last year. In that case, industry paid for tow trucks and earth-movers that supported police operations and followed behind them to clear the road.

In this case the RCMP have told the Rainforest Flying Squad that the logging company would be responsible for removing all impediments and vehicles from the injunction area, but only after the area has been made secure by the RCMP.

The RCMP “may or may not be informed about what’s going on with the industry,” Jade said. “But I think it’s wise to assume they are somewhere nearby so they can get to work right away.”

Another meeting between members of the anti-logging camp and the RCMP liasons is scheduled to occur later today.

Editors’ note: Jerome Turner is on assignment in Pacheedaht and Ditidaht territory working on a feature report on the conflict around old-growth logging on Vancouver Island. Much of the area he’s working in is outside cell service, but he’ll send out updates and videos as he can. Follow Ricochet English on Twitter for the latest. 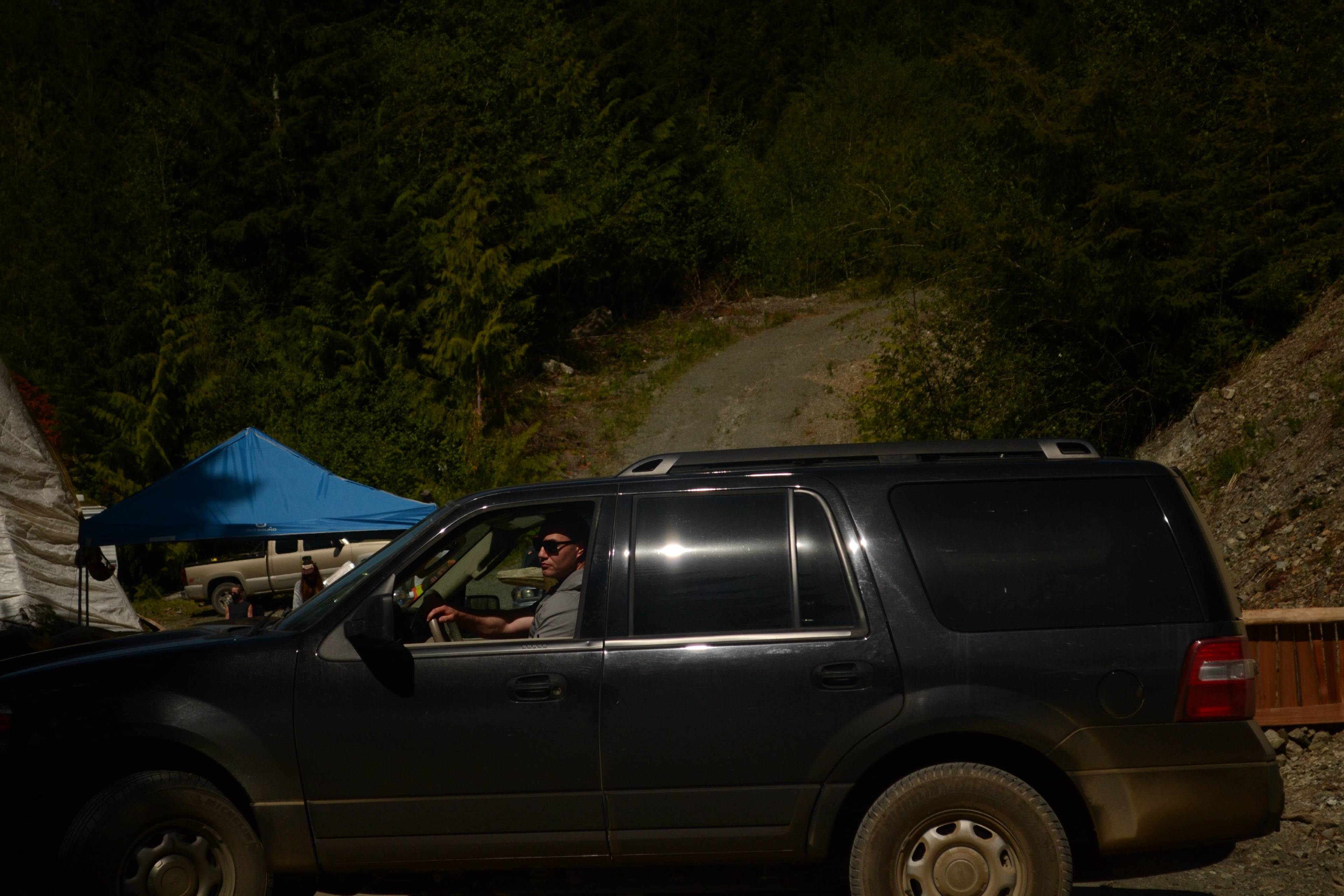 RCMP district liaison officer visiting the Caycuse camp
Jerome Turner
Carbon capture and storage: Another oil and gas subsidy?
The last of the untamed: Wedzin Kwa and the Wet’suwet’en fight to save her
INVESTIGATION: Canadian news media dominated by corporate lobbyists