PHOTOS: Scenes from B.C.’s latest ‘war in the woods’

It was a long day of confrontation and arrests on Vancouver Island. Our journalists documented events from behind police lines.

News by
Ricochet
May 19, 2021
Prior to being arrested, a lone protester sits inside a tree stump at the third blockade taken down during Tuesday’s RCMP actions. (Mike Simkin)
Your ad here
Automated ads help us pay our journalists, servers, and team. Support us by becoming a member today to hide all automated ads:
Become a member
Share this
0 Comments
Share this
0 Comments

Ricochet is on the ground this week at a remote protest site that has become a flashpoint in the battle to save what remains of ancient forests in British Columbia. After pushing back against RCMP attempts to restrict journalists from the area, our team was among a small handful of journalists behind protest lines.

Early Tuesday morning, members of the Rainforest Flying Squad, a group using direct action to prevent old-growth logging in a Vancouver Island watershed, prepared to face a day of arrests by RCMP, who had given notice they would begin enforcement of an injunction to clear the area.

At 8:15 a.m., the police’s 24-hour warning expired. All that was left was to wait for the police to show up at the series of blockades on this remote logging road on Ditidaht and Pacheedaht territories near Carmanah Walbran Provincial Park in southwest Vancouver Island. 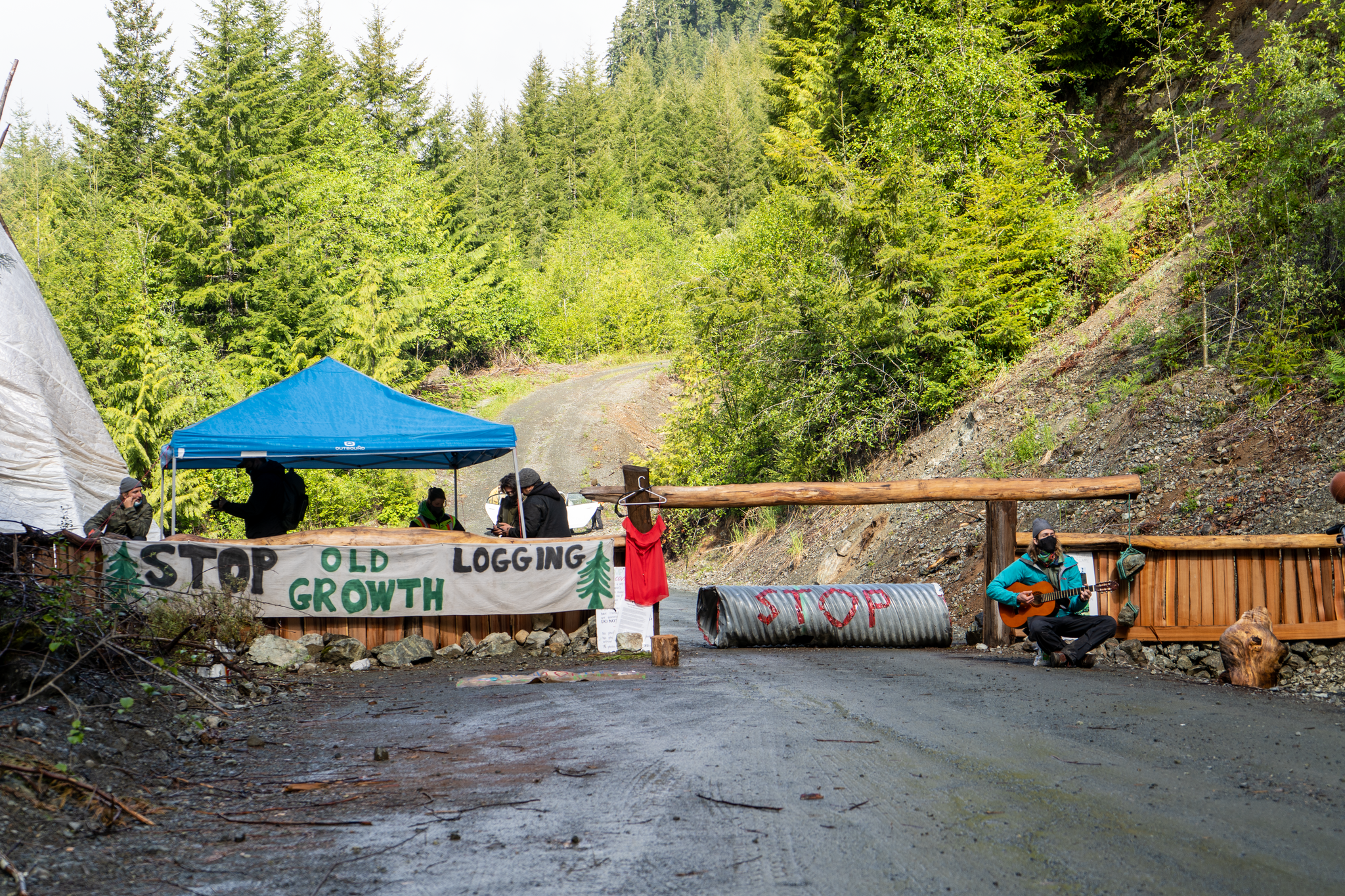 The blockades and protest camps have been maintained for months. Most participants have come from around Vancouver Island and mainland B.C. Forestry company Teal-Jones obtained an injunction from the B.C. Supreme Court on April 1. Police enforcement began at the Caycuse blockade, one of several sites established by opponents of old-growth logging in the area.

When the police arrived at the first blockade, a large group of reporters was escorted in with them as part of the RCMP’s attempts to limit media access to a designated zone.

At first, only Ricochet’s team of journalists and a few freelancers and legal observers were present behind police lines. Over the course of the hours-long police operation, however, some other members of the media moved about more freely in order to report on the stand-off and arrests.

On this day, at least, the RCMP’s attempts to confine media were not wholly successful. 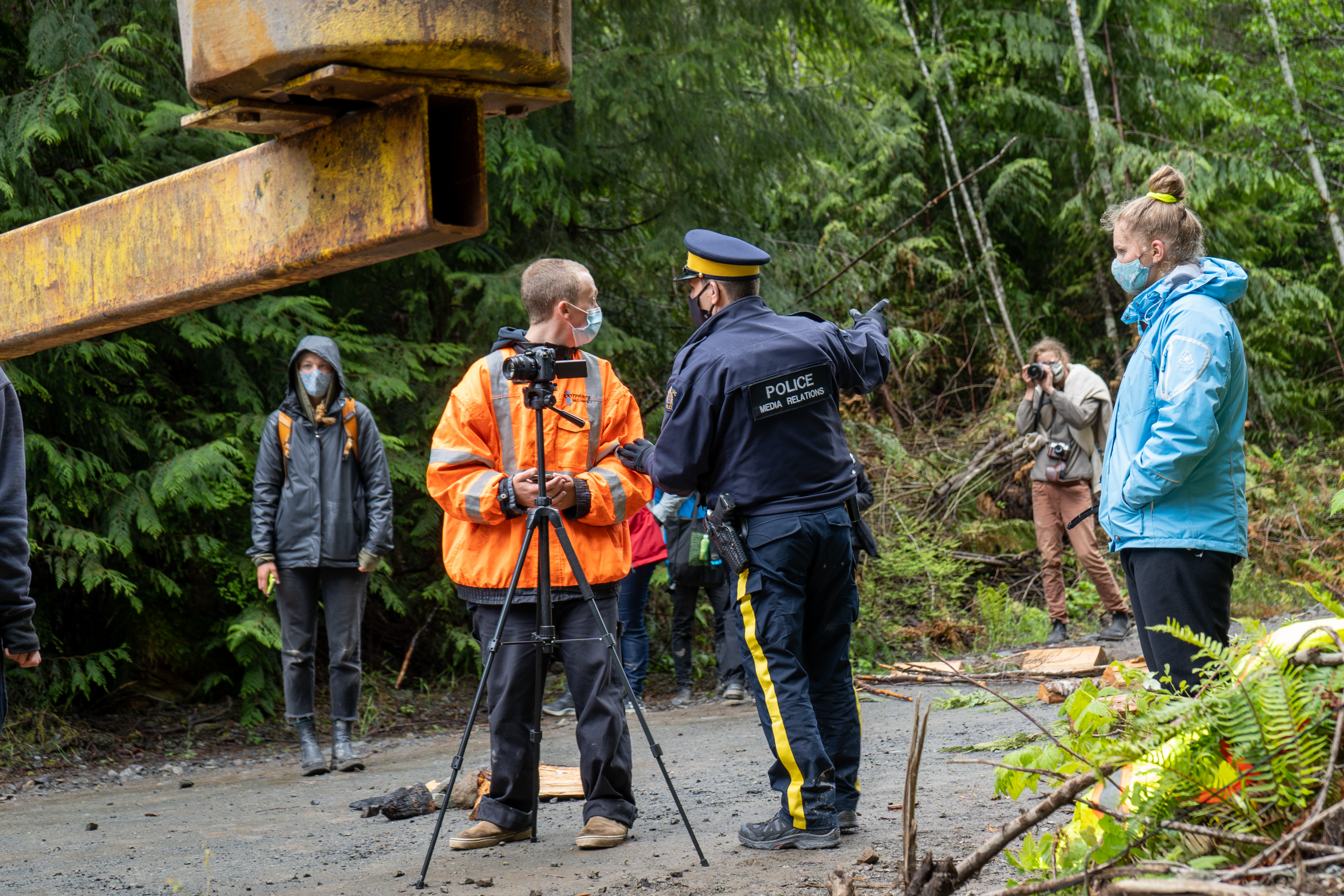 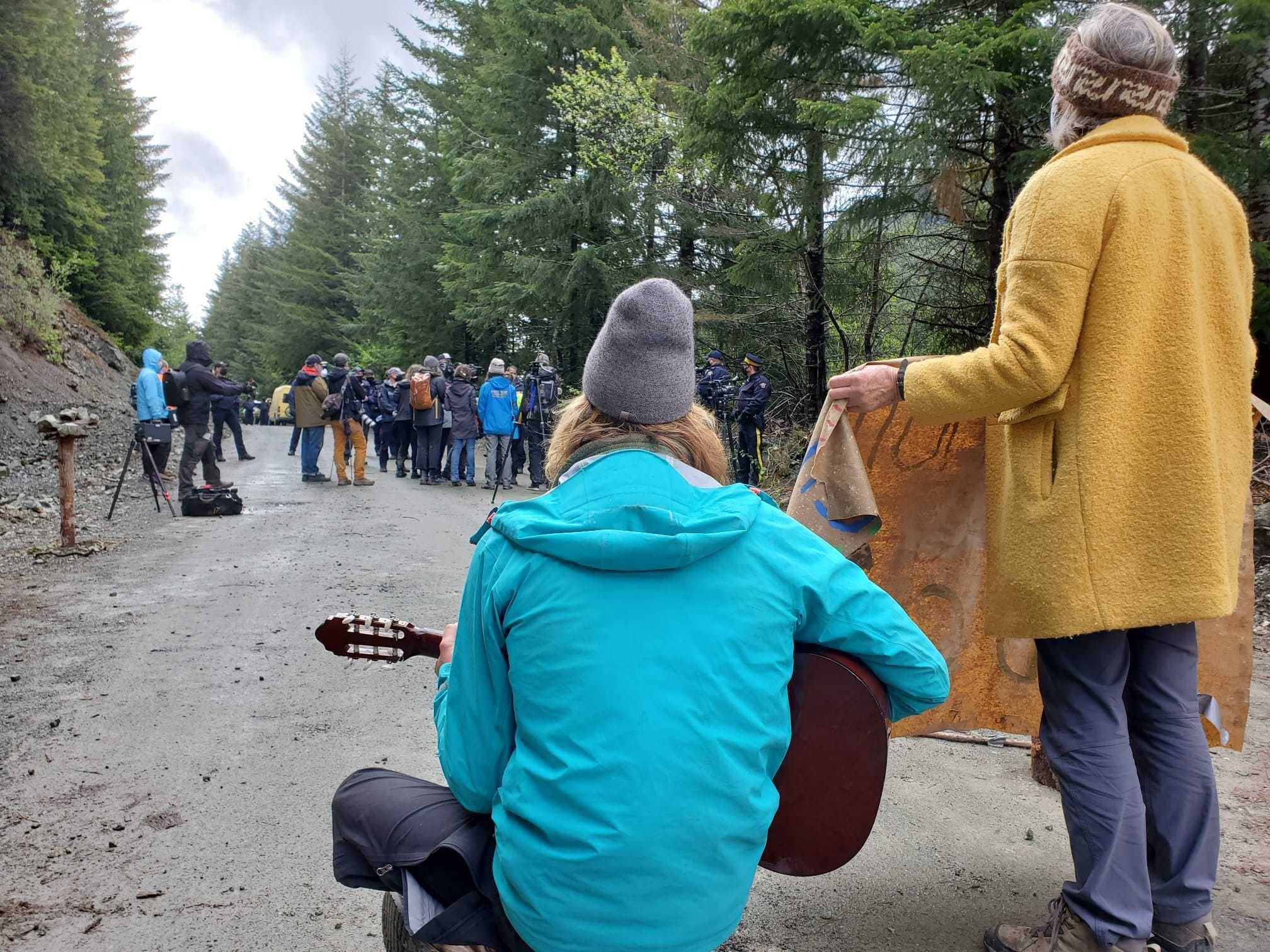 At the second blockade, two people had locked themselves to a metal gate. 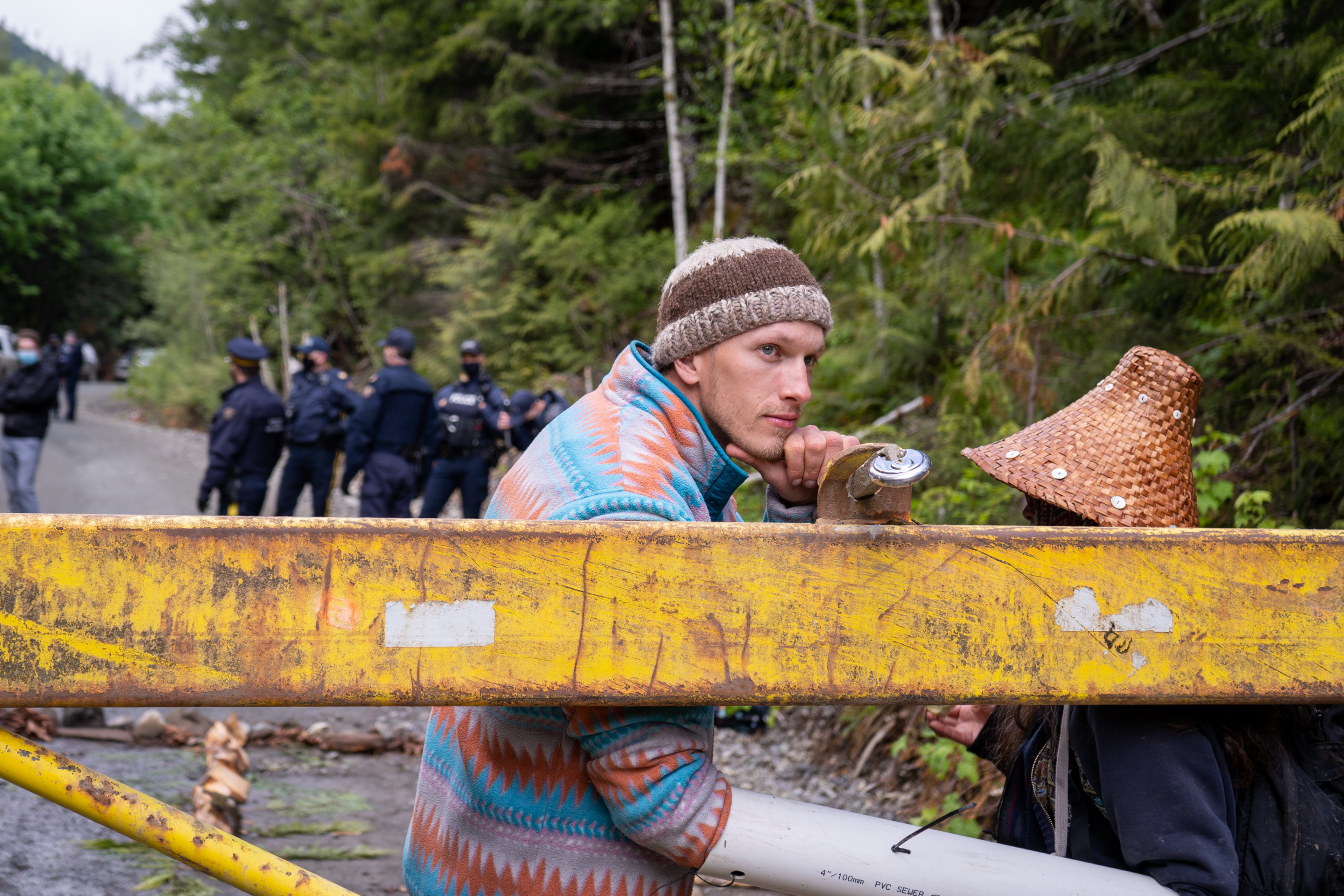 The third blockade consisted of a single person sitting inside a hollowed-out portion of a tree trunk attached to a wood fence emblazoned with the words “Last Stand.” 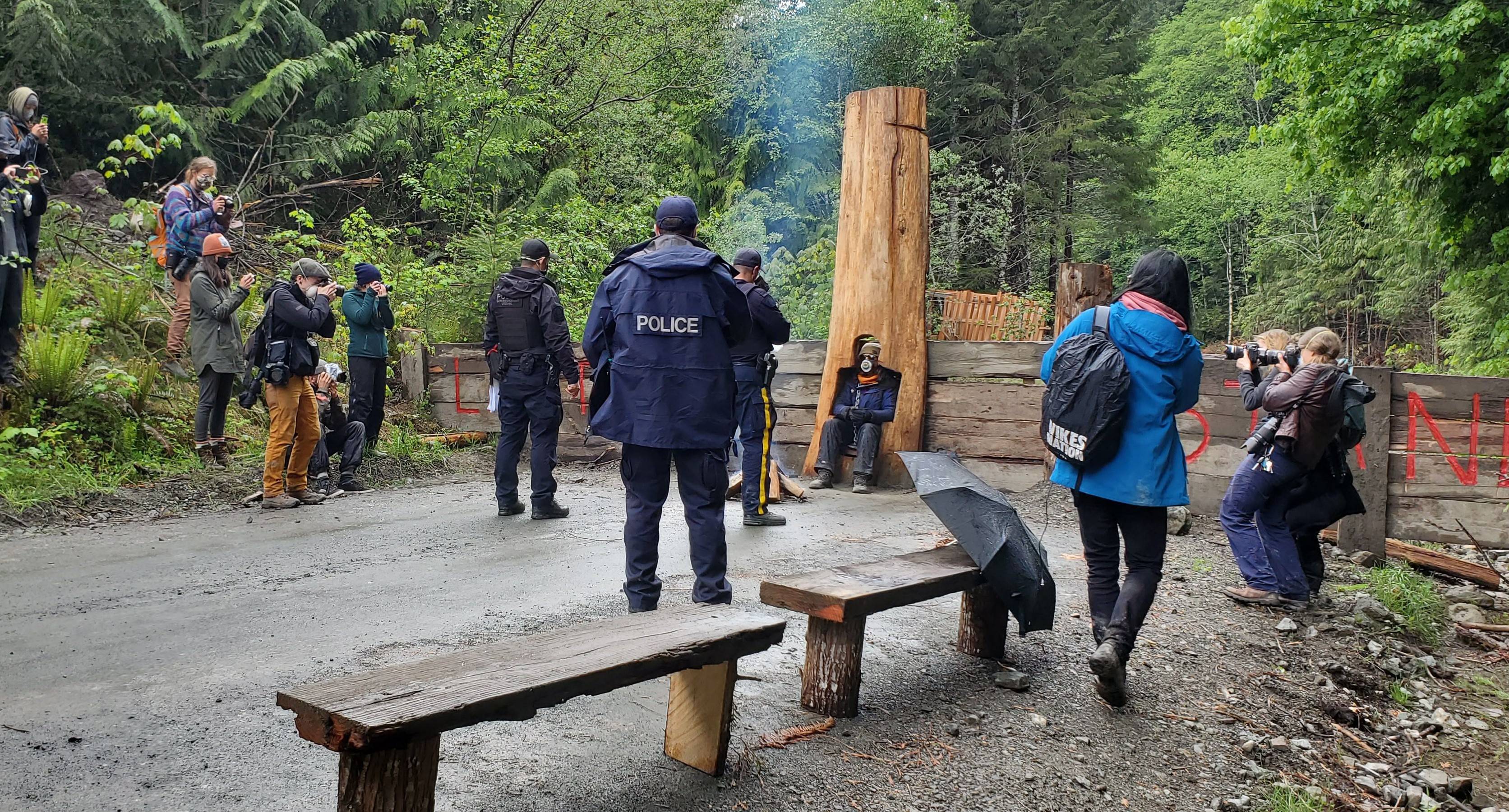 This arrest involved more than 10 police officers, who worked to block the view of legal observers and media.

The fourth blockade consisted of two people and a massive stump from a tree that had lived many hundreds of years, located at the entrance to a logging bridge.

RCMP members carefully assessed the obstacles blocking the bridge, but did not arrest or remove these protesters Tuesday.

On the other side of the bridge, two protesters remained. The first was a person suspended from a wooden tripod high off the ground. 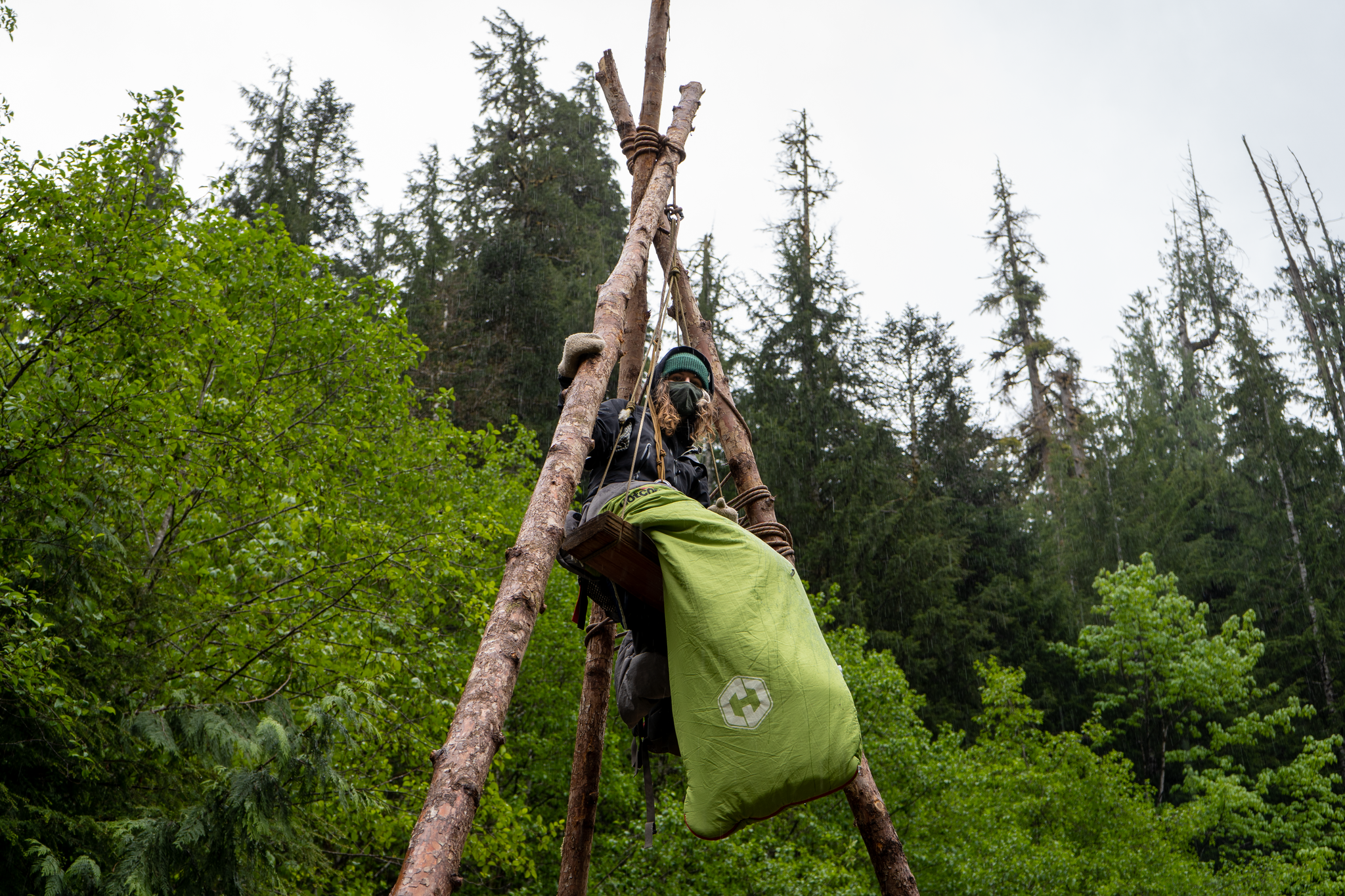 The second, Derek, was literally dug in to the ground in front of the flying squad’s old school bus. 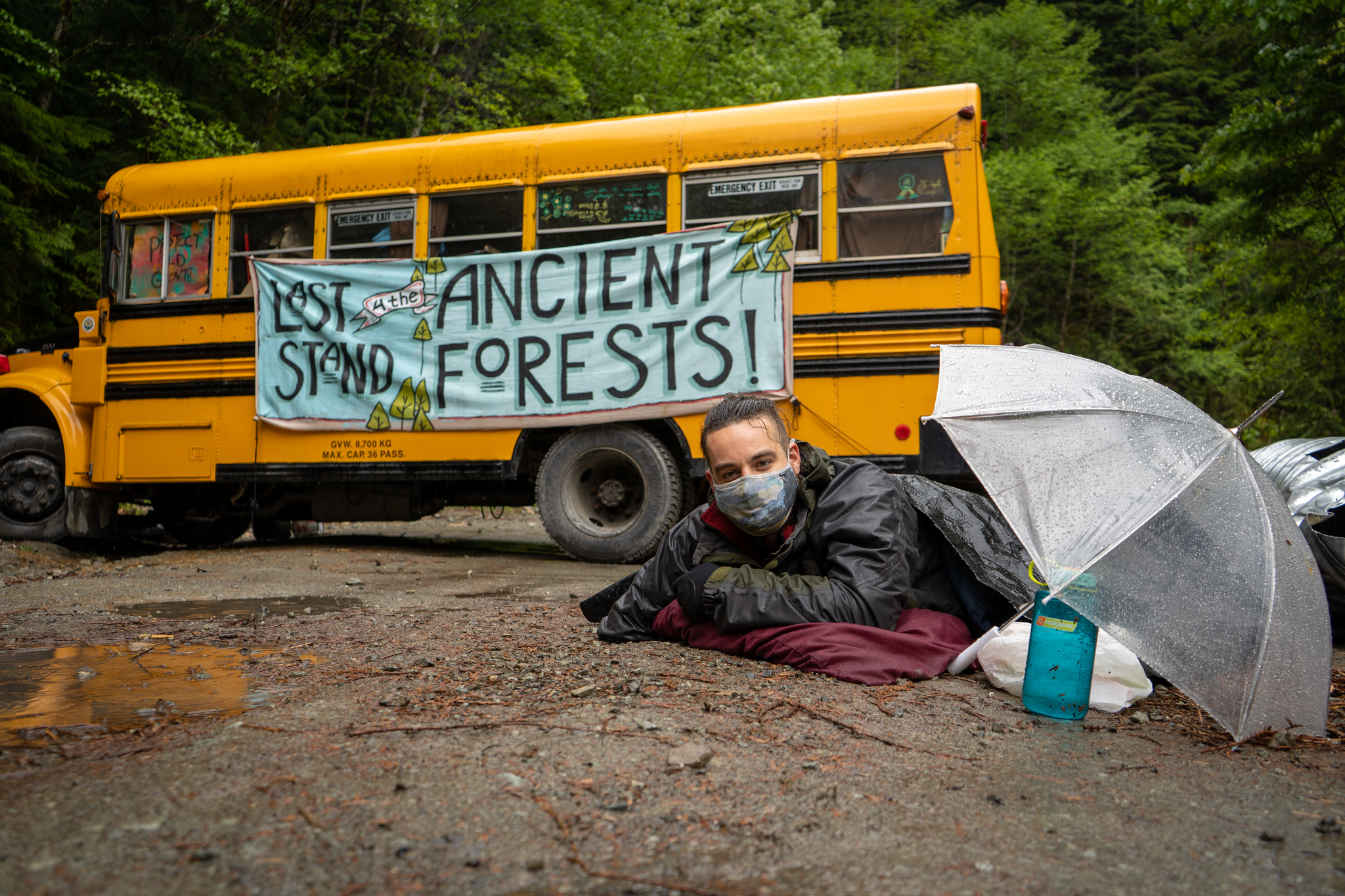 Our reporter Jerome Turner is back on the scene today to document and report on the RCMP’s attempts to arrest the remaining blockaders in order to clear the way for old-growth logging. 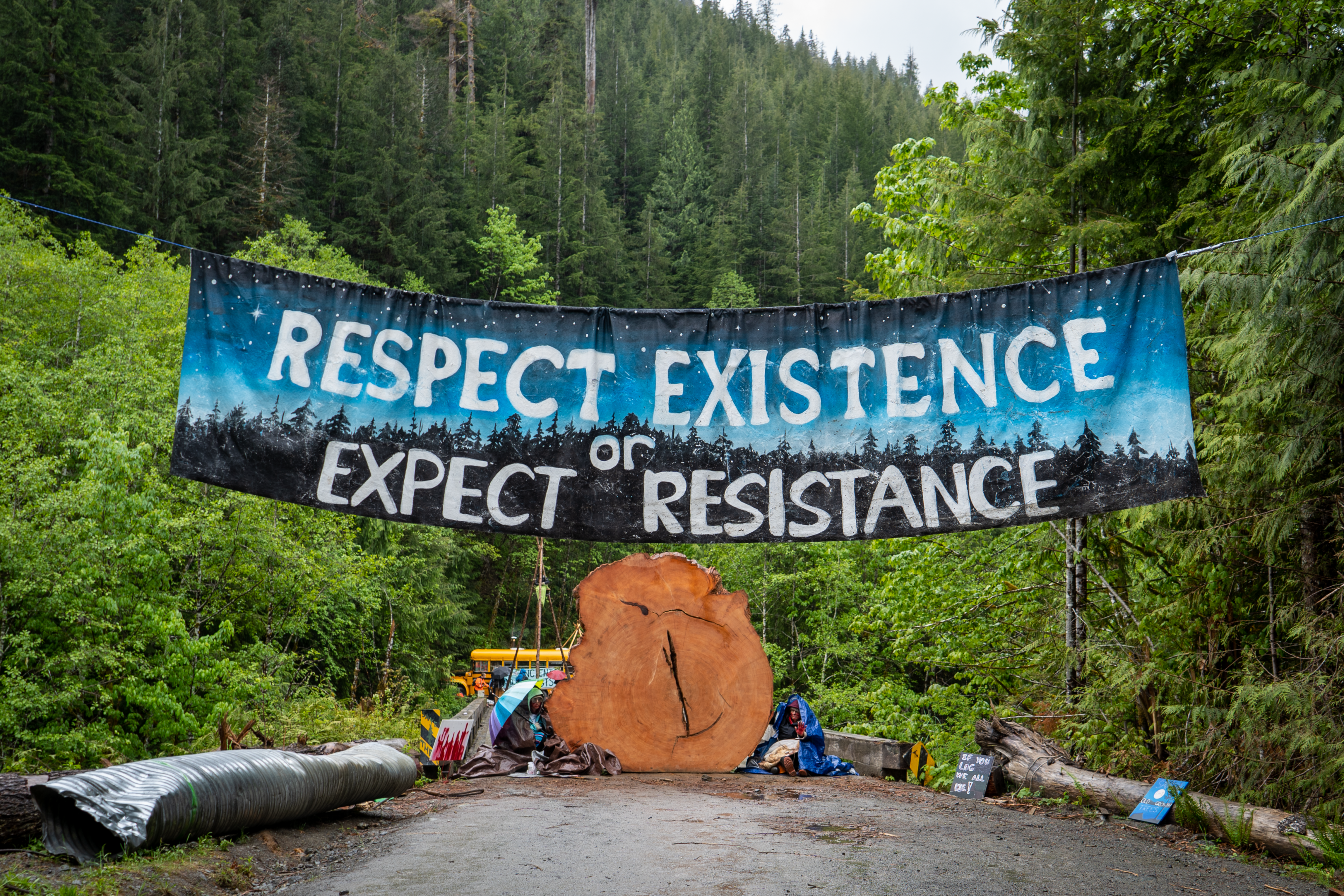