Shelters overwhelmed as overdoses spike, CAQ sits on its hands

Montreal’s support system for those without housing is bursting at the seams, as deadly overdoses haunt the streets

She approached the minister’s bodyguard with her hand outstretched, trying to put together enough change for a cold drink on a muggy day.

He shook his head and kept his watch over the minister. She sauntered across Atwater Ave.

A syringe and glass tube lay half-buried in the dead leaves between them and the table where Ian Lafrenière, Quebec’s minister in charge of Indigenous affairs, sat answering a reporter’s questions. As Lafrenière held court, a street worker stopped next to the used needle and called for someone to bring him a biohazard box.

This is as close as these two worlds came to each other at Montreal’s Cabot Square on Wednesday morning.

In one of them, the city’s homeless population is facing an unprecedented surge in overdose deaths and a spike in the number of people sleeping outside every night, as well as a third wave of COVID-19.

In the other, politicians like Lafrenière are insulated from the worst aspects of a public health crisis. In fairness, he was likely being interviewed for his work in helping secure $3 million for a new homeless day centre on Atwater Ave.

I don’t doubt he cares for vulnerable people and that his role in asking a fiscally and socially conservative government to fund shelters is a thankless one.

But the contrast is striking.

Across the street, at Resilience Montreal, a line was already forming around the block. Last fall the organization served about 125 people for lunch every day. Eight months later, the shelter hustles to get 350 meals packed and ready to go before 11:30 a.m. most days.

“We’re treading water,” said David Chapman, who manages Resilience Montreal. “We’re serving up to 900 portions of food a day, we just got through a series of overdose fatalities over the winter and now — with summer coming — things will probably get worse.

“We were dealing with fentanyl overdoses before but I’m hearing that it’s carfentanil. They say it’s much more dangerous.”

Behind Chapman, a half-dozen volunteers cranked out boxes of salad and slid plates of lasagna into one of three ovens while the Talking Heads blared over a beat up stereo system.

Just how big is the problem?

Despite the obvious time crunch with lunch service just minutes away, everyone seemed cheery enough. One of the volunteers is a student who plays basketball outside Dawson College two blocks north. That’s how he first started volunteering at Resilience Montreal.

“I mean, it’s a great place, it’s a great vibe here, no one judges anybody, everyone just wants to get by,” he said. “There’s clearly a need for it but you don’t realize until you see it firsthand just how big the problem is.”

Across the bustling kitchen, a street worker sat at a computer terminal with her client as they tried to find him an apartment.

“It’s close to a Super C, and a good one too. That’s a good grocery store right there, trust me, I know my city,” she says.

“If nothing changes, we’ll see people sleeping in their car, crashing on couches. It’s going to overwhelm our system.”

The shelter places about six people in apartments every month. It would be more if prices these days weren’t outrageous. With most leases across Quebec coming to an end in six weeks, Montreal’s emergency housing service is overloaded.

“Last year we had a record number of people calling us to help them find an apartment or emergency housing before July 1, and we’re easily going to break that record this year,” says Mathieu Vachon, the communications director for the Office municipal d’habitation. “As of the beginning of May, it was 281 households and that number will rise dramatically as summer approaches. We’ll probably see a 20 or 30 per cent jump in demand from last summer.”

With vacancy rates at 2.7 per cent in Montreal and across the board rental increases that fly in the face of provincial restrictions, every expert I’ve spoken to says the city is in the throes of a rental crisis.

“People will end up on the streets because of this,” said Véronique Laflamme, a coordinator with the FRAPRU housing rights group. “That’s how bad it is. Not only in Montreal but across the province. If nothing changes, we’ll see people sleeping in their car, crashing on couches. It’s going to overwhelm our system.”

Over at Welcome Hall Mission, staff are referring one new household a day to emergency housing services. Mission CEO Sam Watts says his workers are seeing a lot of single mothers in dire straits and are prepared for a 30 per cent spike in demand for their food bank.

“We’re providing information about (low-income housing) but the waiting list is over one year in many cases,” Watts said. “And the condition of these apartments is not always ideal.”

Of the 20,000 low-income units Montreal manages, 400 are condemned and 10,000 are “dilapidated,” according to the Fédération des locataires d’habitations à loyer modique du Québec.

At Resilience Montreal, efforts to place people in housing are dwarfed by the sheer number of new visitors it gets every month. Workers may be able to help a half-dozen people find a home every month, but Chapman says there’s about 10 new faces at the shelter every day.

Outside the day centre, a line formed from the kitchen onto the sidewalk and about 200 feet west of Atwater Ave. Jeffery Francis Berthiaume sipped a cup of coffee and sat in the shade, smiling at the passersby.

“I try not to abuse the service, not to come every day because you can see they’re overwhelmed,” said Berthiaume. “I only come when I’m really hungry, every few days or so.” 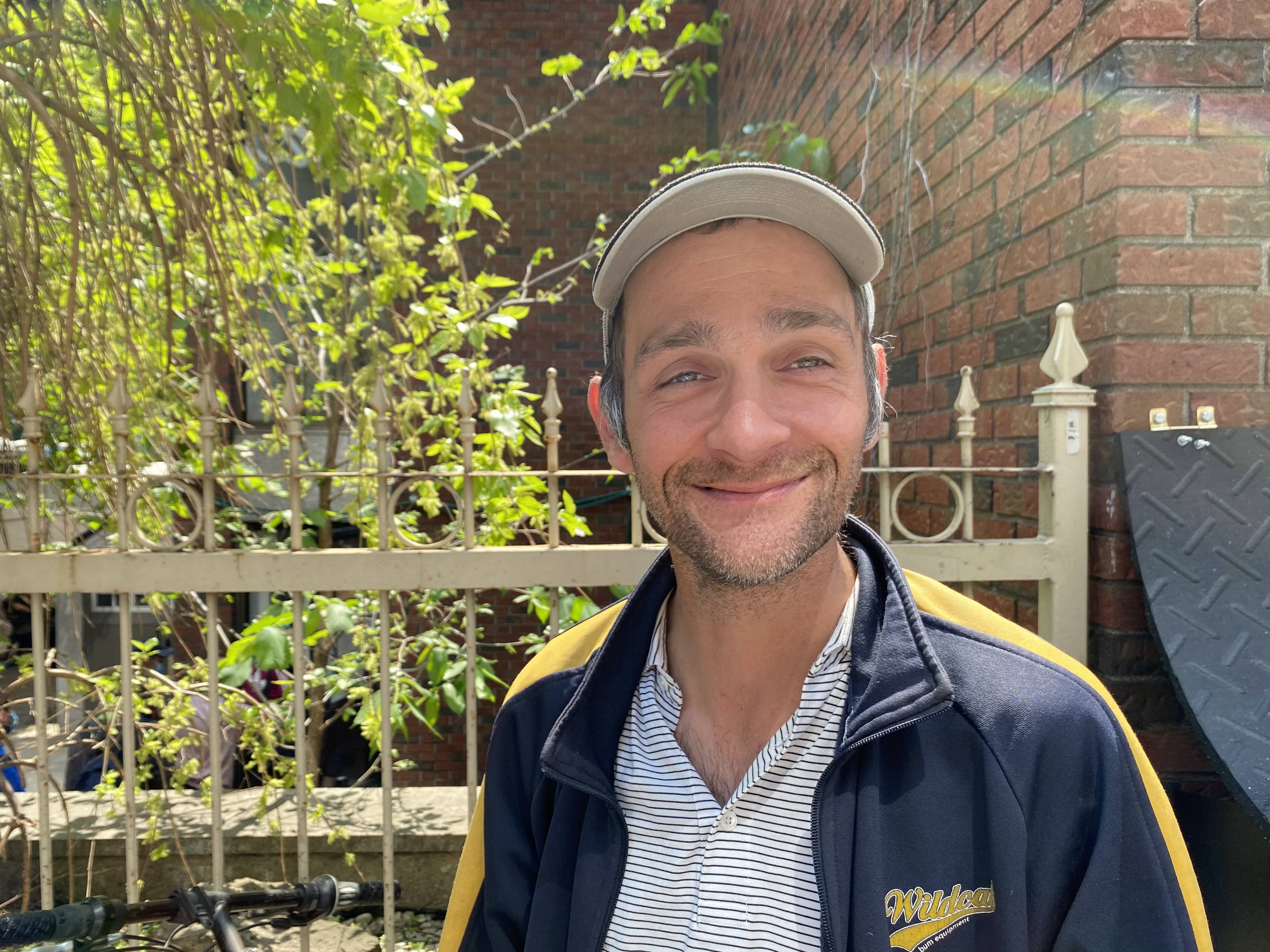 Berthiaume removed his baseball cap to reveal a scar above his left temple.

“I was hit by a car going 88 miles an hour in ’97,” he says. “I was just a kid. Nearly killed me. Some days I wish it had. I had epileptic seizures for a long time but now it’s mostly nerve damage.”

He’s been homeless for two years, he says. These days, he hangs his head at the Place Dupuis hotel east of St-Laurent Blvd. The hotel was requisitioned by public health authorities last year to deal with the explosion in homelessness that accompanied the second wave of COVID-19.

Resilience Montreal will have to move south because its host building will be gutted and turned into luxury housing.

He chatted with a woman behind him in line on Wednesday, gently asking about her swollen eye. She said a man rained punches onto her as she lay sleeping on the street. The wound required stitches and there was still dry blood along her eyelid when she spoke to Berthiaume.

“He isn’t coming here these days because he knows what he did,” she says. “I’ll get through this.”

A few more friends joined them. Some opened up about their own struggles. Berthiaume joked that he was starting to feel like a television psychologist.

“If I were Dr. Phil, I could fix all your problems,” he said.

Closer to the shelter, “Cheryl” left her spot in line to watch cars idle at a traffic light. One driver looked miserable as she tried to avoid looking at the lineup.

Cheryl waved to get her attention but to no avail. Finally, she placed her index finger on the car’s dusty hood and traced a heart.

“I love you!” she said with a mischievous grin.

The driver broke into a smile, the traffic light turned green and she drove past Cabot Square, where hundreds of construction workers erected two new condo towers around the park.

In fact, by next year, Resilience Montreal will have to move south because its host building will be gutted and turned into luxury housing. Billboards advertising the new projects show rooftop swimming pools, designer furniture and a pristine view of the St. Lawrence River.

In the other world of Cabot Square, street workers are fighting to keep an emergency tent shelter from being shut down by the city. It was launched by a group of Indigenous women who wanted to prevent another freezing death after Raphael André’s body was found outside a Parc Ave. shelter in January.

Now it’s just a way to make sure people have a warm meal and a dry place to nap once the sun goes down. They do not have a pristine view of the river.

This article was produced through The Rover, Christopher Curtis’s investigative journalism project with Ricochet. Sign up below for weekly newsletters from the front lines of journalism.
‘Gut-wrenching:’ Drilling starts under Wet’suwet’en river
Canada should use this moment to return Crown lands to Indigenous Peoples
Health care in Canada is being deliberately sabotaged