Locked into a PVC tube cemented into the ground on a logging road for hours on end, Sage Jackson, 23, found solace in the giants of the forest nearby. The night of June 17 was cold, and sleep was evasive.

Then at midnight, bright white lights flashed in the darkness. Jackson could hear their boots, as an RCMP tactical team approached to raid the blockade camp in the Fairy Creek forest on southern Vancouver Island. Now wasn’t the time to flounder.

“They tried to antagonize us,” Jackson told Ricochet during a telephone interview.

Ricochet profiled Jackson, who is Nuu-chah-nulth/Heiltsuk and Nuučaańuł?ath/Haílzaqv, in mid-June, describing her efforts to establish an Indigenous healing space at one of the camps.

“An officer was kicking rocks next to my face when he was getting someone else out. I asked him why he was doing this to me. He said to ensure my safety.”

The old-growth forest in B.C.’s Fairy Creek area has garnered international attention as thousands of activists have gathered there to try and save it from logging. The RCMP have arrested over 300 people since May as they enforce an injunction obtained in April by logging company Teal-Jones to remove the forest defenders.

Jackson said she has an inherent responsibility to protect Indigenous territories from the impacts of continued colonial violence. That includes putting her body on the line, because it’s linked to the survival of the land.

“They stole our axe and our other things. Even some of our food and water. It’s inhumane,” she said during her stay at the Eden camp, where her arm was cemented into the ground.

She was frightened while the RCMP rummaged through the camp, and tried to call out to them.

But they ignored her.

“They wouldn’t answer me, to tell me what their purpose was there” at that time of night.

Then it was quiet. 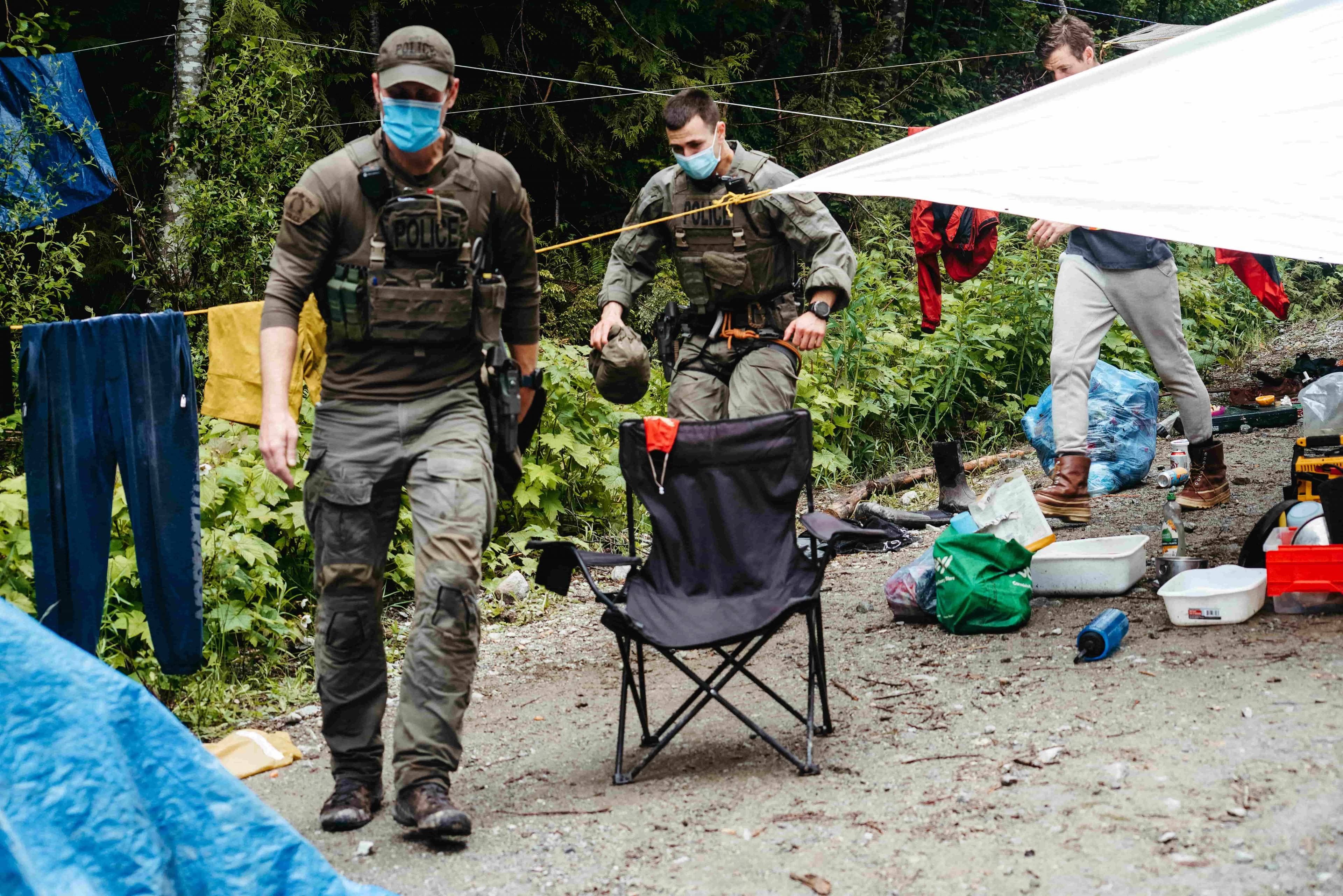 Two hours later the tactical team returned to the camp, Jackson says, interrogating the land defenders, most of whom were Indigenous youth.

At 9 a.m. the arrests began, and the RCMP removed Jackson’s arm from the ground. It didn’t happen gently, she said.

“An officer was kicking rocks next to my face (during the late night raid) when he was getting someone else out. I asked him why he was doing this to me. He said to ensure my safety.”

Jackson said media and legal observers were forced to stand 60 feet away, except for two who could witness arrests from 30 feet away. But the RCMP shrouded the forest defenders in blue tarps, again telling Jackson it was for her safety. But she didn’t feel safe.

Adrenaline kicked in and past trauma was triggered when a male officer approached Jackson to unlock her for arrest. She had requested a female officer arrest her but was refused, she said. She sang the “Women’s Warrior Song” to strengthen her spirit.

Then she asked the police why they were wasting resources on policing the forest.

“Don’t you have anything better to do? Why aren’t you looking for my auntie and cousin?” she asked about family members who are victims of the missing and murdered Indigenous women and girls crisis. “Why aren’t you out searching for residential school children? But you’re extracting Indigenous youth from the lands.”

An officer knelt on her back and tightly pulled her hand behind her, says Jackson, who weighs just 110 pounds.

“She had bruises all over her body and on her midriff. That was really heavy.”

Freelance photojournalist Ora Cogan, on assignment for Ricochet and Canadaland, heard Jackson’s screams in the distance. The RCMP have imposed chaperones on any journalists who want to enter the area, and routinely hold members of the press in pens too far away to properly witness or document arrests. Journalists have been repeatedly threatened with being arrested if they don’t comply with arbitrary and constantly changing rules, rules that make their jobs far more difficult.

On this morning, Cogan was being held in a media exclusion zone far from where police were enforcing the injunction. But she could hear Jackson’s screams.

“There’s no reason for it (the exclusion zone),” says Cogan. “I really don't see any justifiable reason to have it so far back. We should all be able to witness it. It feels very dark here, you know, the whole atmosphere with what’s going on with the police. When I’m shooting, I felt pretty intimidated by some of the officers.” 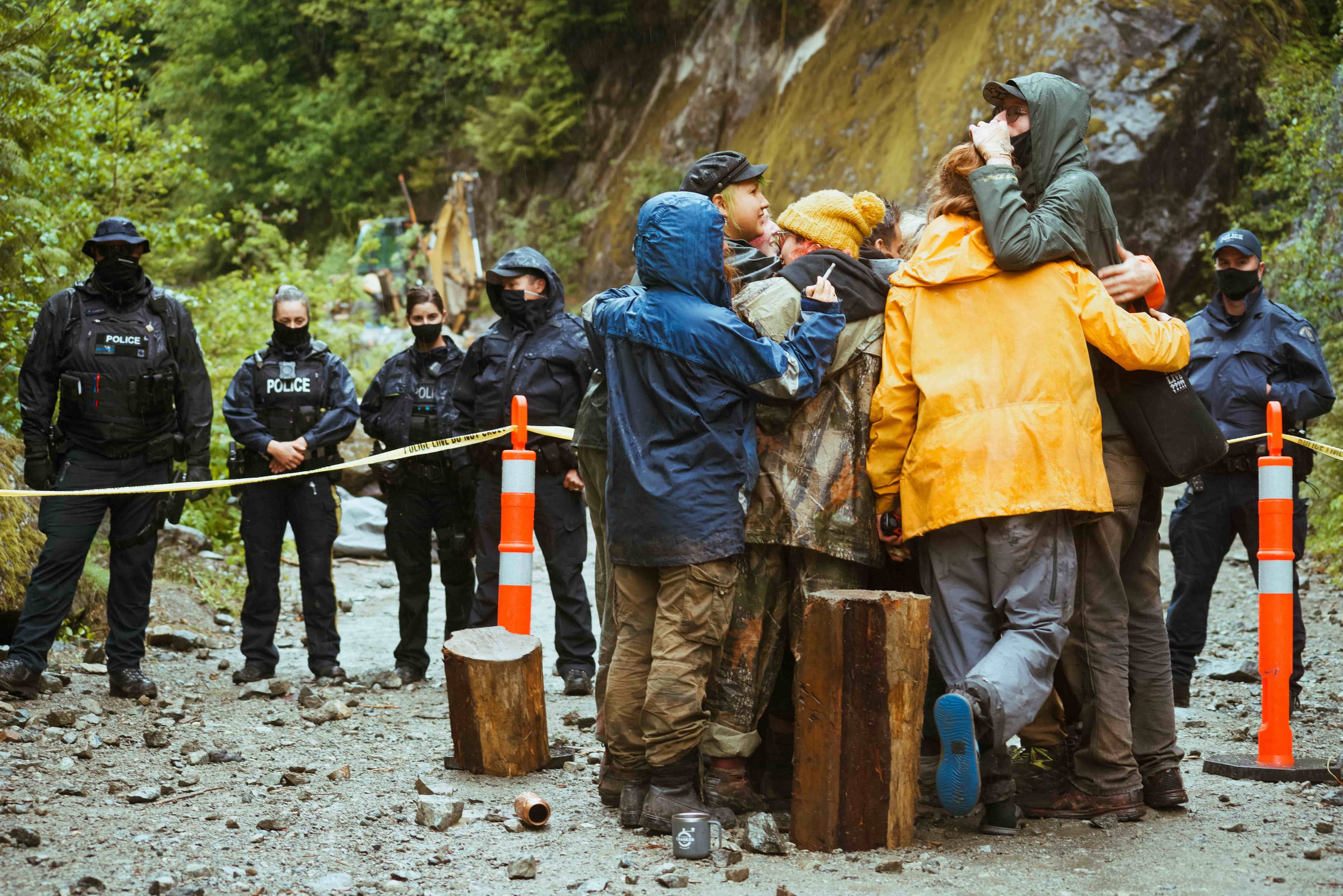 Blockaders huddle together in the rain at Waterfall camp
Ora Cogan

Cogan has been covering the Fairy Creek blockades for weeks, and has witnessed several night raids and increasing police aggression.

“I don't know why they (RCMP) would need to spend all of that money and time and effort and do things to scare people. They can just come during the day and arrest them at any time.”

She ran into Jackson at another camp the day after Jackson’s arrest.

“She had bruises all over her body and on her midriff. That was really heavy,” says Cogan.

Jackson says she got checked out at the Cowichan District Hospital in Duncan after her release from jail because her ribs felt broken. The handprint of an officer was visible on her arm. Since then she’s felt exhausted and has been bombarded with nightmares, while also taking in the devastating news of more Indigenous children’s remains being found across the country.

“When it’s early in the morning and there are fewer people around, they are a lot more likely to make some more violent arrests.”

Noah Ross, a Vancouver Island–based lawyer helping the Rainforest Flying Squad, as the loose group of volunteers behind the blockades is known, says the RCMP are systematically working to reduce the number of witnesses to their actions through use of exclusion zones.

“It’s like they are held accountable by crowds to a certain degree. When there’s large numbers of people, they typically don’t make arrests. When it’s early in the morning and there are fewer people around, they are a lot more likely to make some more violent arrests.”

The RCMP is like a “colonial army” occupying Indigenous lands, he says, and they don’t treat Indigenous people the same as white settlers in these situations.

“There’s definitely times where they (RCMP) are behaving very peacefully, largely where it (the protest or blockade) is dominated by settler activists.”

Concerns he’s hearing from activists on the ground include an increasing police presence, camp raids and fears of being harmed by heavy machinery like excavators. RCMP are contracting excavator operators to help dig out land defenders from the ground, and in some cases the heavy equipment is mere inches from activists’ bodies.

“I’ve heard concern for the safety of people that are going into a situation worried about the use of excavators. But they’re very committed to what they’re trying to do, which is to protect old growth. And there’s a lot of resolve to keep on fighting even after the violent tactics that they’re saying RCMP have used and continue to use,” said Ross.

As this story was being written, a new video was posted on the main Instagram account for the blockades. It shows another young, Indigenous woman being violently arrested.

The RCMP did not respond to repeated requests for comment.