Threats and fear as loggers clash with blockaders at Fairy Creek

Over 320 arrests have been made at the Fairy Creek blockades since police began removing forest defenders in mid-May. As enforcement of an injunction obtained by logging company Teal-Jones enters its seventh week, aggression from police and logging industry workers has been ramping up.

Each day the RCMP try to clear logging roads, encountering blockaders in what are known as “dragons” — a device that secures a person’s arm in a tube buried in the ground — or surreal-looking wooden tripods dangling up to 30 feet in the air. Land defenders have adopted these tactics in an effort to halt the logging of old-growth forests in Pacheedaht and Ditidaht territories.

Evidently frustrated with the slow pace of removals, the RCMP have begun using heavy machinery like chainsaws, excavators and jackhammers in close proximity to the bodies of blockaders. Those on the ground have also complained of injuries from violent arrests, several of which have been caught on film and shared on social media. 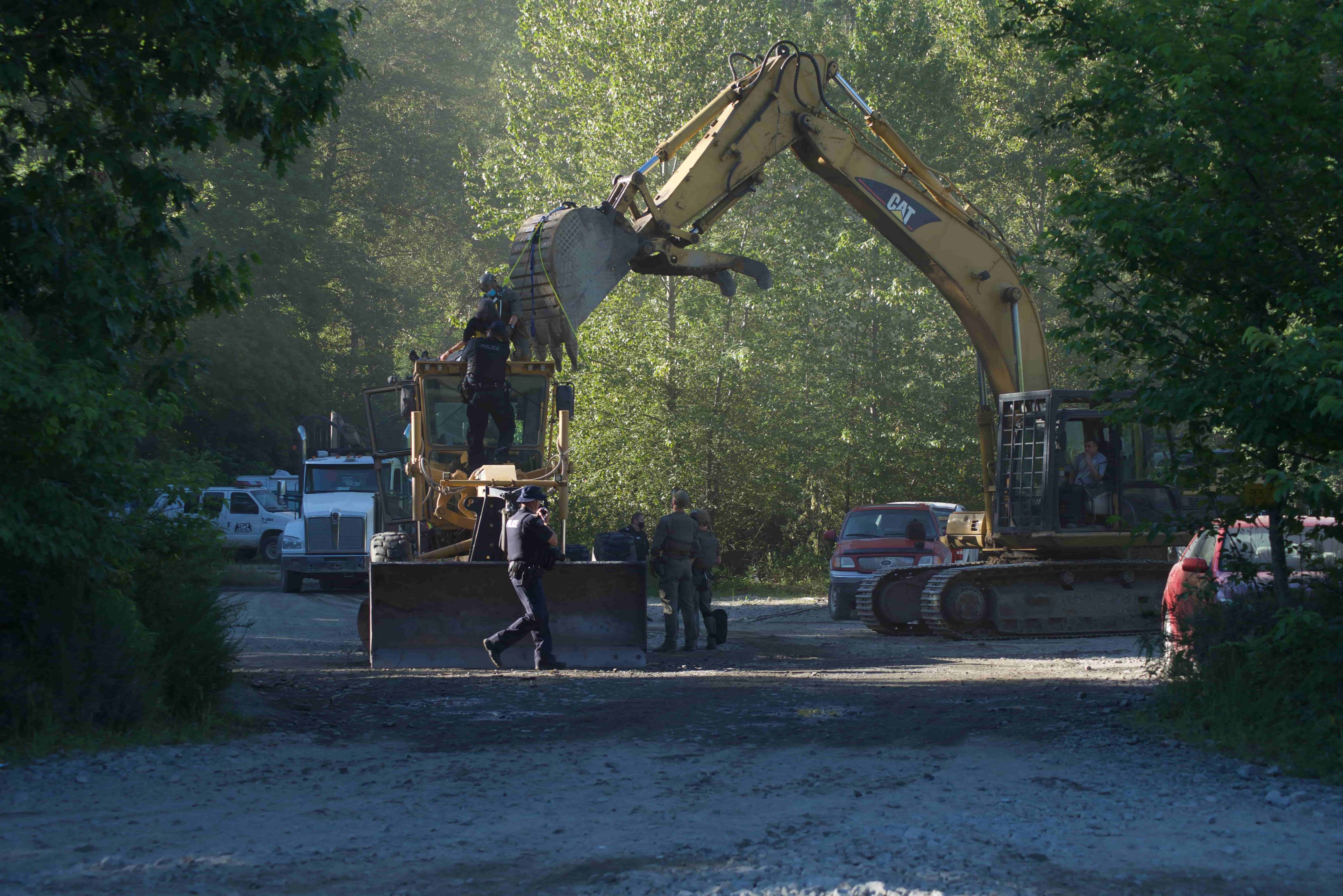 An excavator is used in close proximity to a blockader, June 25, 2021.
Ora Cogan

“While it’s a welcome step in the right direction,” the Rainforest Flying Squad, a group of volunteers that has been organizing the blockades, wrote in a statement, “we, and Pacheedaht elder Bill Jones, remain concerned that it allows for the status quo of old-growth logging to continue unabated across the territory.” 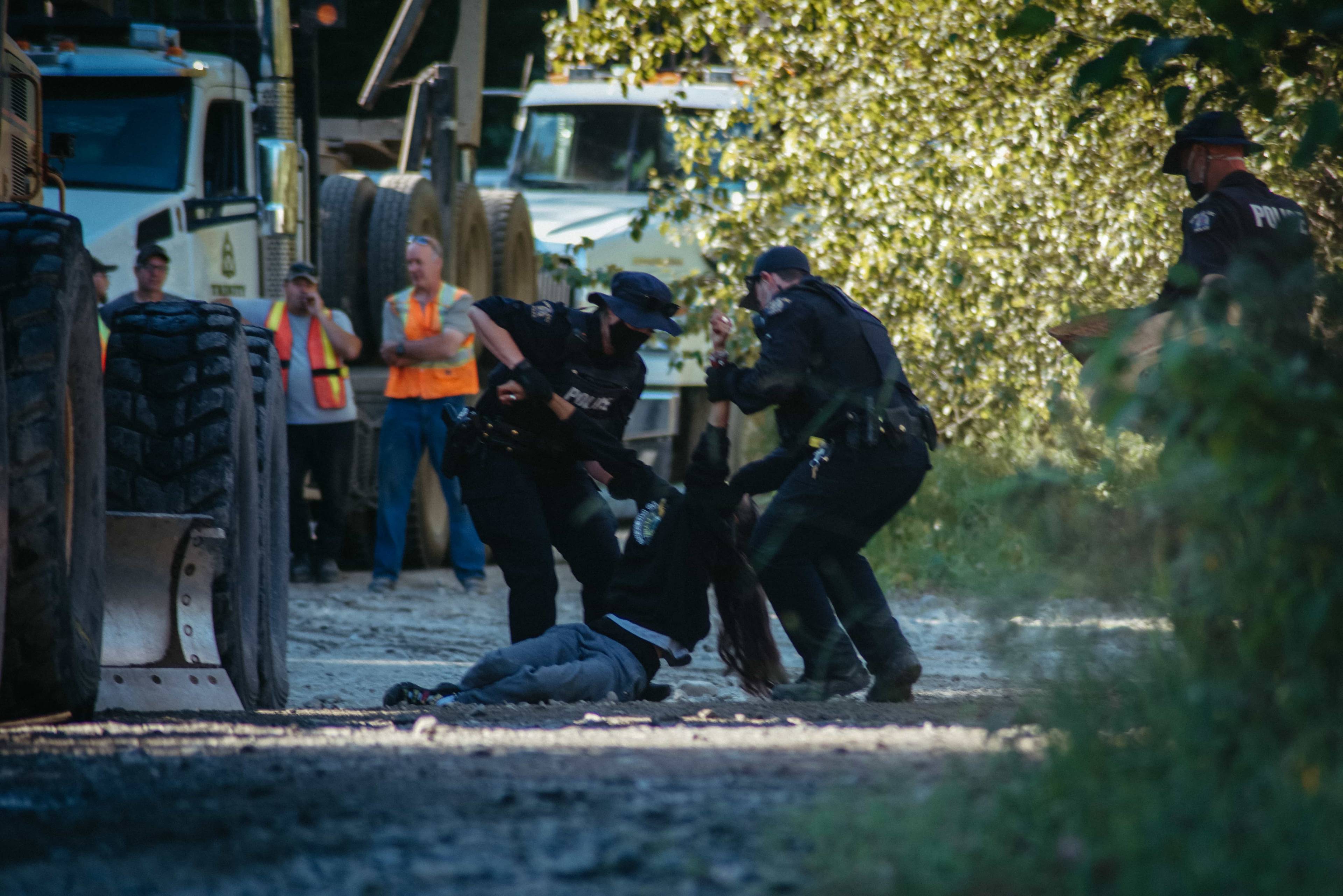 To say tensions are high in the camps is an understatement. The sound of chainsaws and explosives detonating (most likely for road building) is common, and sleep is hard to come by.

Tactical emergency response teams, the RCMP’s version of a SWAT team known for their military-style green uniforms and aggressive tactics, have been conducting more late-night raids on remote blockades. 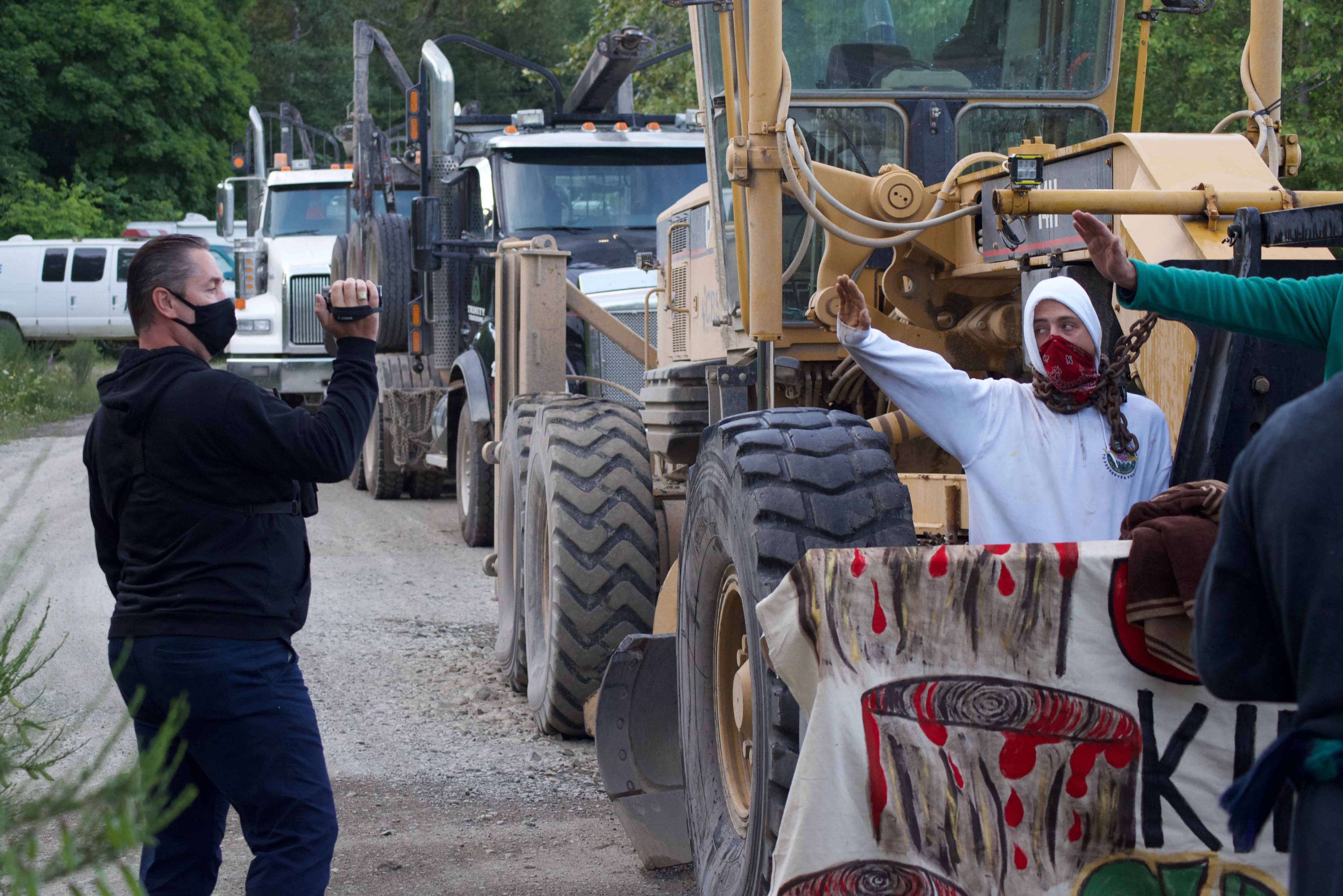 The teams drop in by helicopter in the early morning hours, carrying out arrests that the government has acknowledged in court filings are intended to take place in secret, without media present. A coalition led by the Canadian Association of Journalists that includes Ricochet has filed a legal application contesting RCMP restrictions on media access. That application will be heard in court on July 12.

Although blockaders have remained peaceful through months of civil disobedience, they describe increasing concern over reports of the RCMP using dangerous extraction methods and targeting Indigenous people. In videos that have emerged of violent arrests, the victim is most often Indigenous, despite a majority of blockaders being settlers. 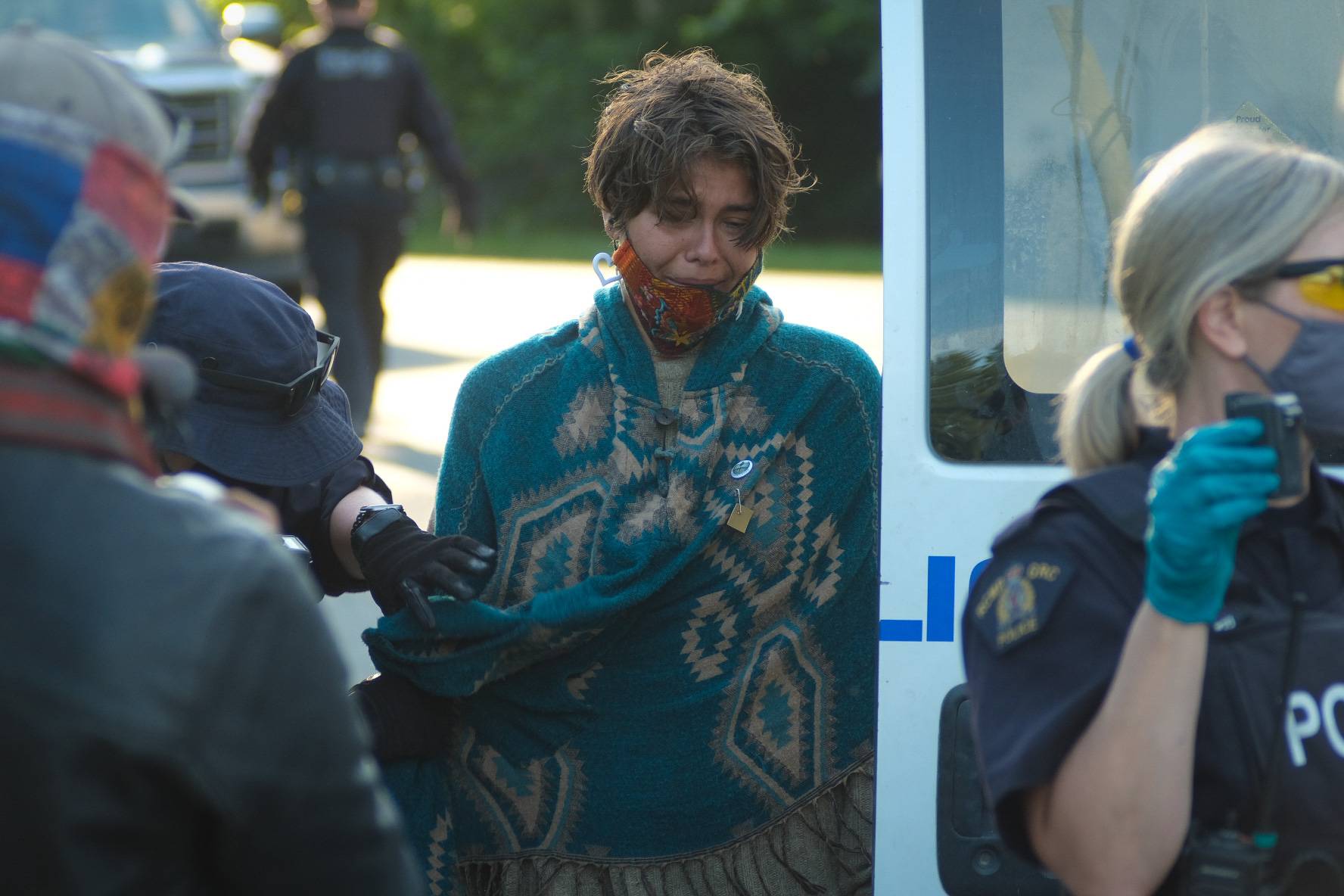 A Friday in the forest

In the wee hours of Friday morning, a group of around 10 Indigenous and settler forest protectors locked themselves to a bulldozer and gate at an industrial forestry lot in Honeymoon Bay, near Lake Cowichan on the southwest coast of Vancouver Island. The lot is used to store heavy equipment used by forestry workers.

When loggers arrived to the worksite, a hail of insults and threats followed.

“They’re not even real Indians!”

The words “cunts” and “bitches” were used repeatedly.

Sage, 18, an Indigenous land defender, said, “I personally haven’t faced that much racism, like in my life, all at once.” 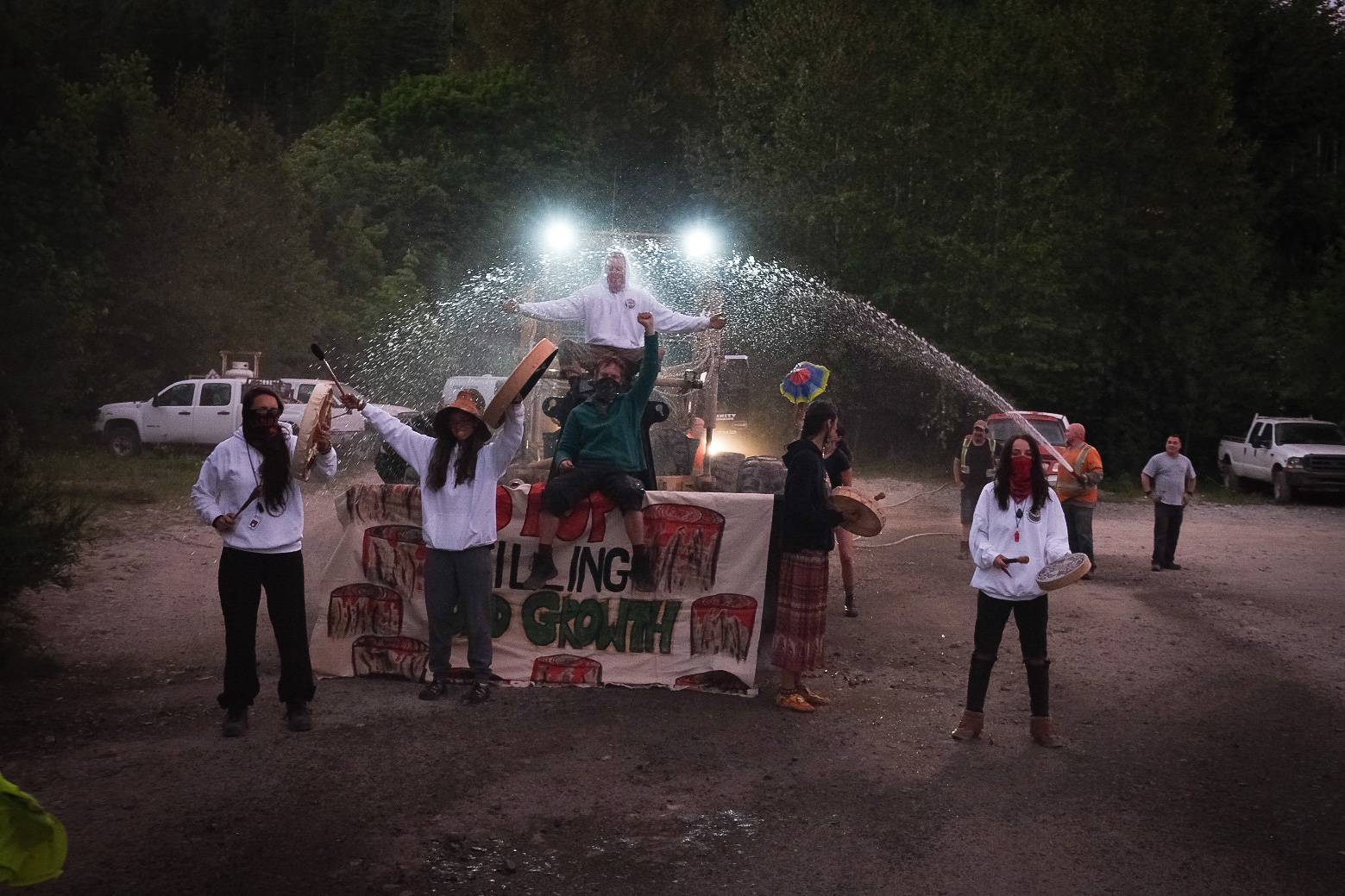 “Get the grader and just mow them down! Run her over!” yelled a logger.

A logger revs his engine and threatens to drive through blockaders locked to a gate at an industrial facility near Honeymoon Bay on Friday. Video also includes a number of insults and threats from loggers. Full story coming soon.

Another logger charged at and grabbed freelance photographer Angelo Scaia as he was photographing the scene.

Photojournalist Angelo Scaia is assaulted by an unidentified logger during a blockade of an industrial lot near Lake Cowichan on Friday. #FairyCreek #bcpoli pic.twitter.com/v4d5vnx5rM

The RCMP arrived around two and a half hours after the action had begun. They read the injunction aloud and told blockaders they would face arrest unless they left the area. Officers then began making arrests without providing an opportunity for people to leave. 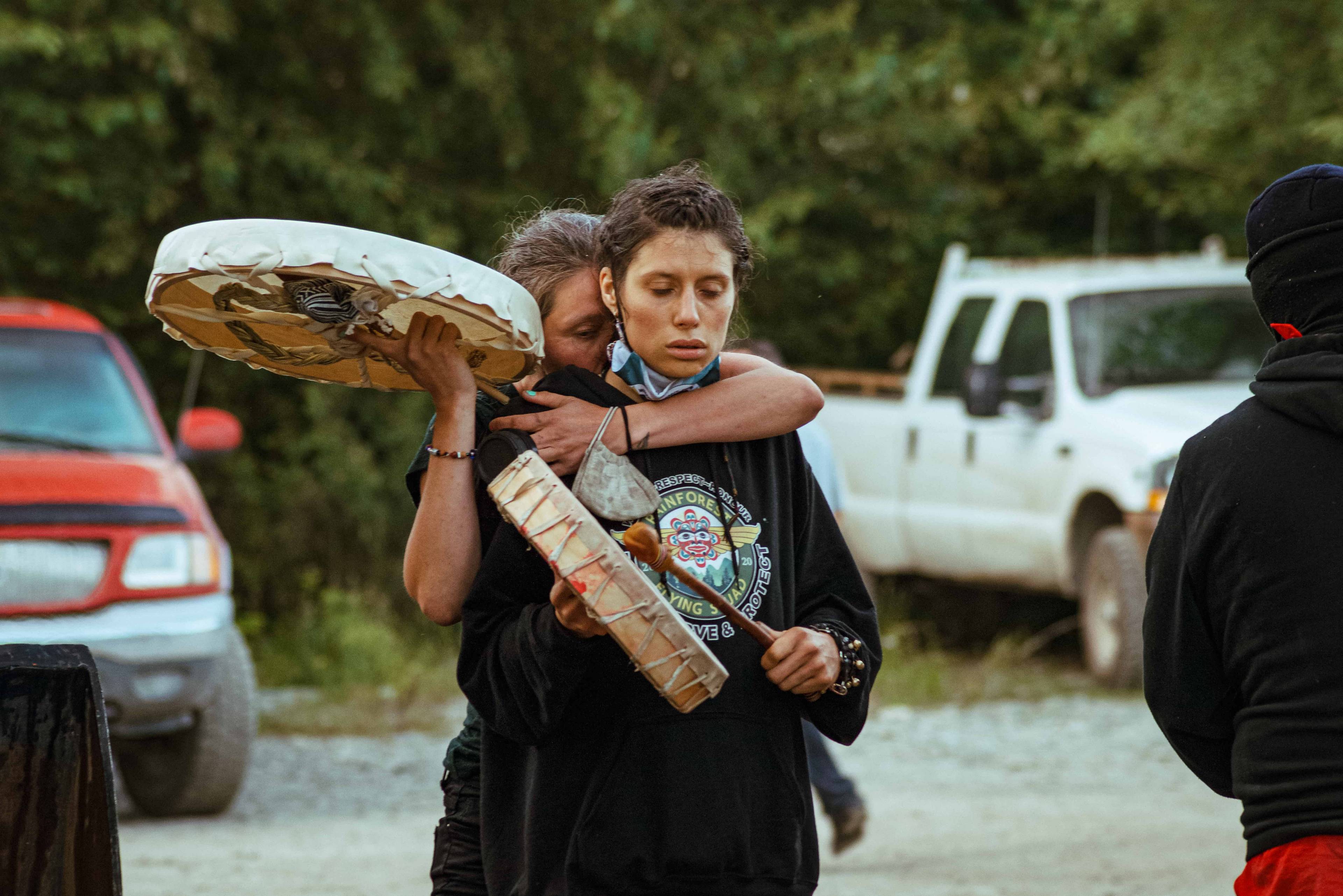 Indigenous matriarchs after being sprayed with the hose
Ora Cogan

One logger told an officer, “Put the cameras away, let us go in there. I guarantee they won’t be coming back, they’ll be going to the hospital.”

“That’s uttering a threat,” the officer responded. “I don’t need to come get you as well. I get it, I understand your frustrations. You don’t think I’m frustrated too? I’ve been here for seven weeks.”

A logger is cautioned by an RCMP officer for uttering threats towards blockaders at an industrial site near Honeymoon Bay on Friday. Full report coming soon.

“Lava,” an independent filmmaker on the scene who did not want his real name published due to concerns over his safety, says he was threatened by loggers.

“One of them said, ‘This is our ground, go to your side.’ I didn’t move because I wanted to keep recording. I didn’t respond. Then the big guy in the grey shirt said, ‘Get off our fucking ground or we’ll kill you.’ ”

The police formed a line, and an officer said, “Anyone that chooses to stay on this side will be arrested.”

The first to be arrested was an Indigenous land defender known as “Uncle,” who was standing by a car to the side of the industrial lot’s driveway. 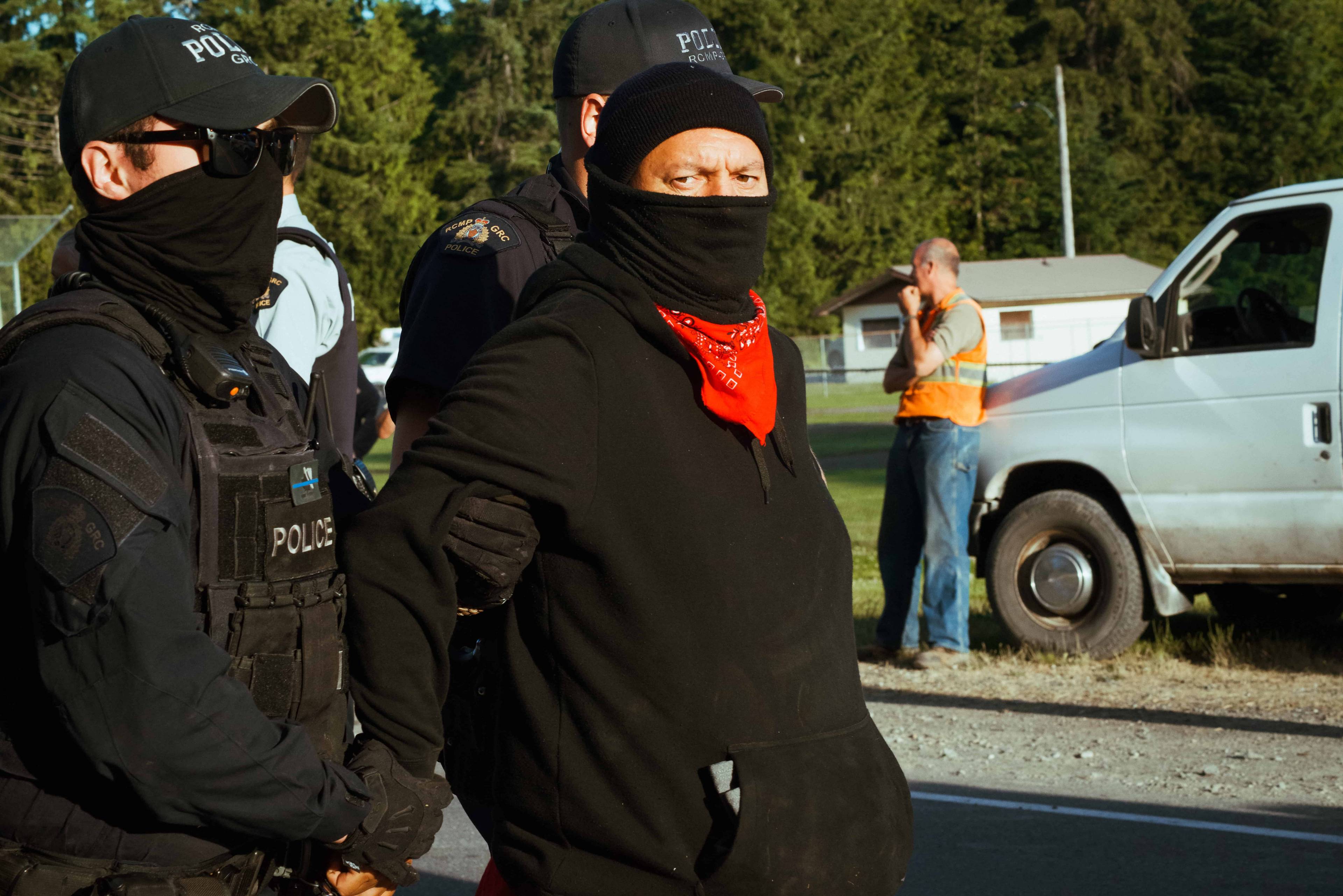 The police initially removed media from the scene, as blockaders chanted, “We have the right to media.”

Members of the press negotiated with the RCMP media relations officer and were eventually allowed to stand across the road from the scene. But most of the arrests occurred while media were excluded.

An Indigenous matriarch known as Rainbow Eyes was atop the bulldozer, and RCMP EMT units began the process of extracting her. Police allowed the bulldozer operator to operate a bucket truck and assist in the extraction. Warnings about his earlier conduct were ignored.

Over a dozen people were arrested on Friday. 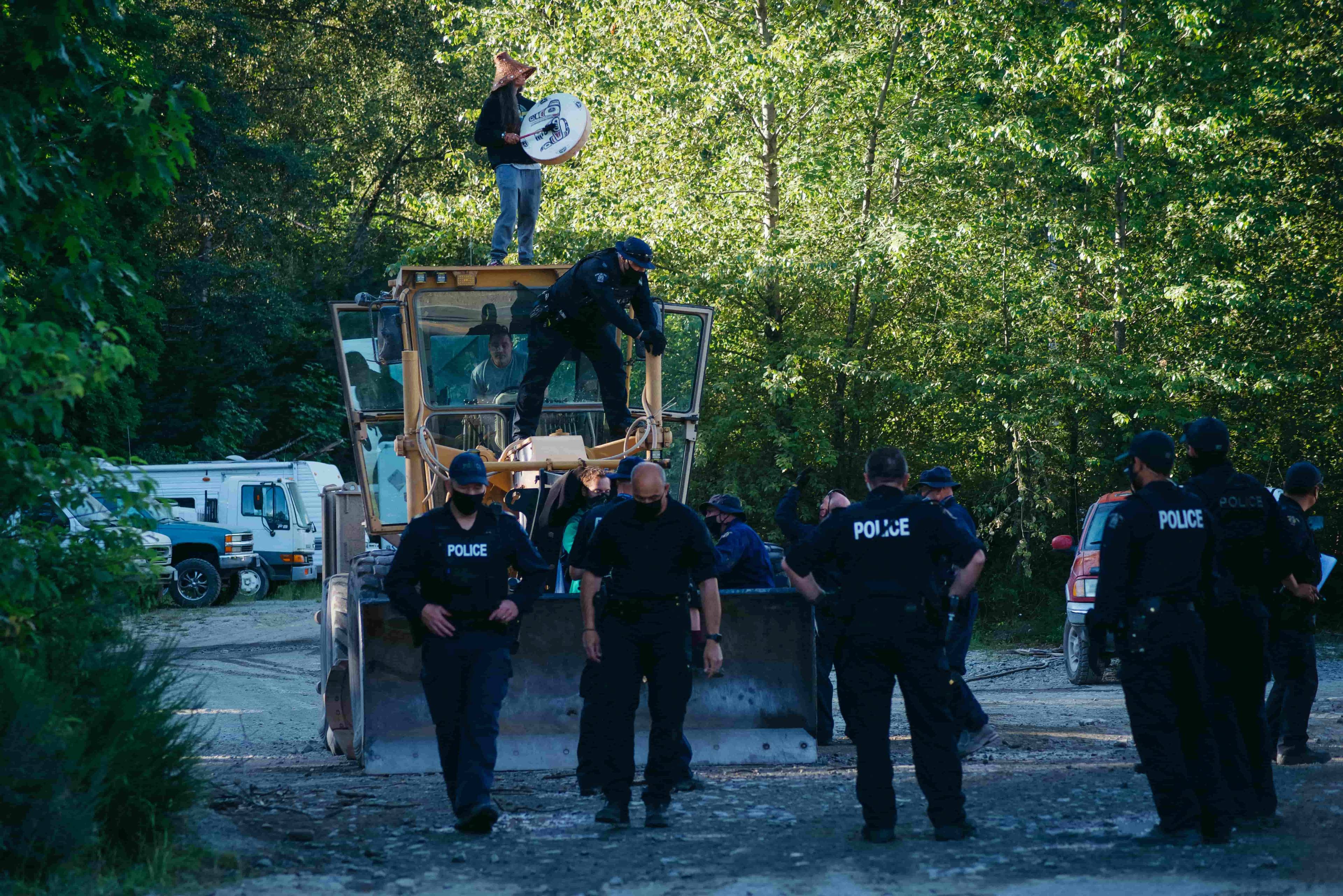 The unprecedented heat wave that has blanketed the area led the RCMP to reduce their interactions over the past few days to “roving patrols and wellness checks for all persons currently inside the injunction boundary,” according to media relations officer Chris Manseau.

Blockaders report at least one arrest took place Tuesday at Waterfall camp, and police reportedly told people on site they would be back for more the next day.

“I’m going to shove that fucking stick up your ass...”

Tensions are escalating between loggers and blockaders at #FairyCreek. A number of threats were made by loggers during a confrontation at an industrial lot near Lake Cowichan on Friday.