In Quebec, Emancipation Day has yet to make its mark

August 1 is mainly recognized by Black Quebecois, who advocate for themselves without any real government attention

What does August 1 mean to you?

On March 24, 2021, in Canada’s House of Commons, the motion to designate August 1 as national Emancipation Day was passed unanimously. No abstentions. For: 335. Against: 0.

a) the British Parliament abolished slavery in the British Empire as of August 1, 1834; b) slavery existed in British North America prior to its abolition in 1834; c) abolitionists and others who struggled against slavery, including those who arrived in Upper and Lower Canada by the Underground Railroad, have historically celebrated August 1 as Emancipation Day; d) the Government of Canada announced on January 30, 2018, that it would officially recognize the United Nations International Decade for People of African Descent to highlight the important contributions that people of African descent have made to Canadian society, and to provide a platform for confronting anti-Black racism; and e) the heritage of Canada’s people of African descent and the contributions they have made and continue to make to Canada; and that, in the opinion of the House, the government should designate August 1 of every year as “Emancipation Day” in Canada.

But in Quebec, radio silence. Nothing in the media.

As if our political system weren’t a colonial relic inherited from the British Empire.

As if slavery and anti-Black racism weren’t part of our history.

As if, beyond the hashtags and the black square of #BlackLivesMatter, shared eagerly across Quebec, Black lives don’t actually matter much at all.

As if we’re upholding a different collective narrative.

Many places across the country have not waited for this recent federal recognition — which came before an election, during a pandemic that highlighted the many facets of systemic racism — to celebrate Emancipation Day.

In 2008, the Ontario provincial government recognized the first of August as Emancipation Day. Owen Sound, a city in southwestern Ontario, has honoured the date for nearly 160 years. In fact, the oldest festival in North America is the Owen Sound Emancipation Festival, which began in 1862, five years before Canada officially became a country. “The festival wanted to highlight the importance of the British Commonwealth Act of 1833 abolishing slavery, which went into effect on August 1, 1834,” said MP Alex Ruff. It freed more than 800,000 slaves in the British colonies, and the festival has continued ever since. The city of Vancouver followed suit last year. 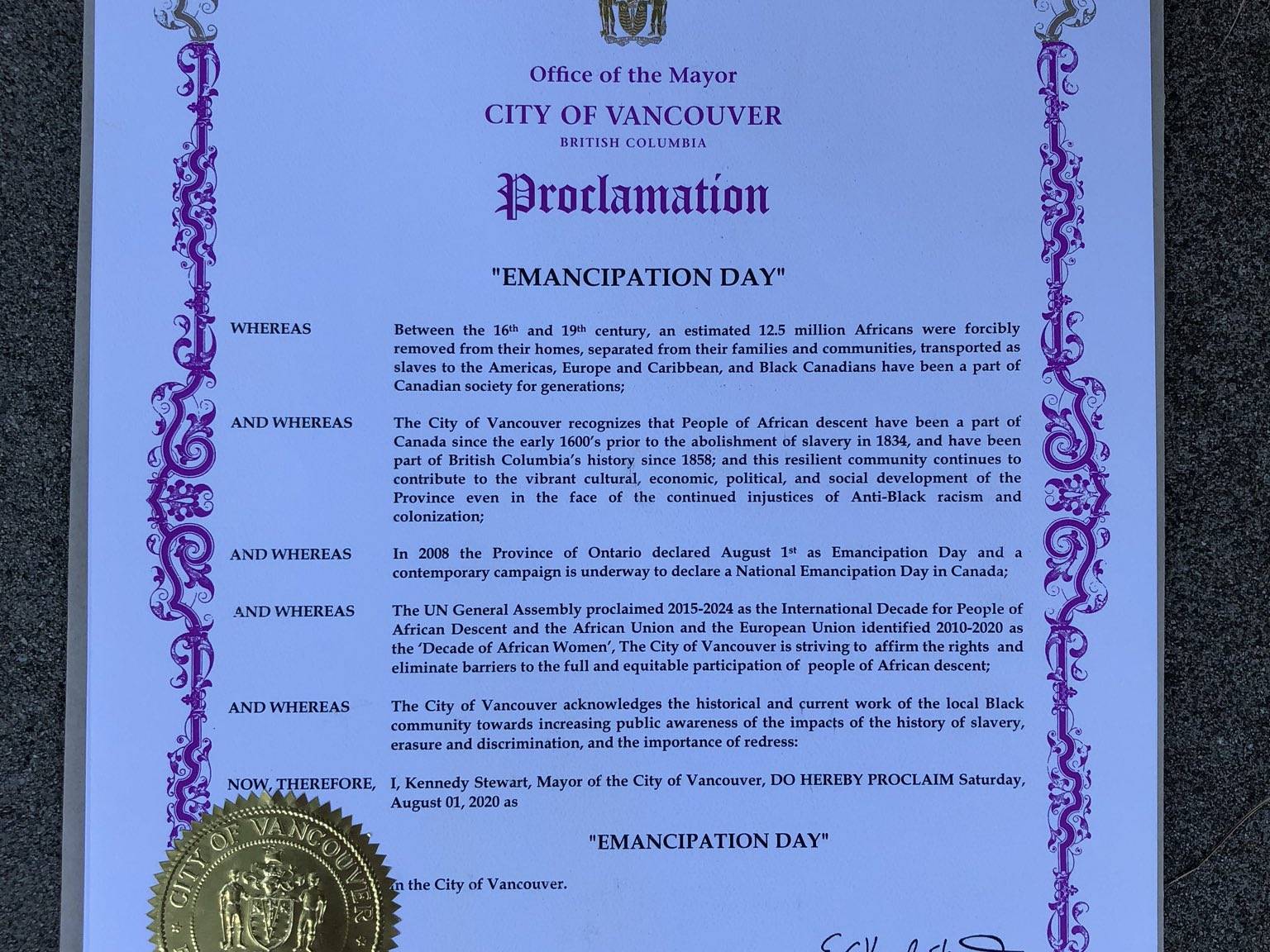 But what about Quebec?

Here, Emancipation Day is primarily recognized by Black Quebecois communities, whose members advocate for themselves in English and in French, in full respect for linguistic duality, without any real government attention.

The many points of resistance

Last year, in the wake of protests sparked by the death of George Floyd, some 100 people in Montreal, mostly Black, took part in a march on August 1, reported the Montreal Gazette. They started at Place d'Youville in Old Montreal, where the August 1, 1834, announcement that slavery had been abolished took place.

The march ended at Oscar Peterson Park, near the former site of the Negro Community Centre (NCC), where the world-renowned musician took piano lessons as a child. Along the way, people chanted about their desire to revive the NCC. Built in 1927 and closed in 1992, only to be demolished in 2014 with its land sold for $300,000, the NCC was a beacon for Montreal's Black communities. It served the surrounding Irish communities as well, offering health care, social services, tutoring, sports activities and advocacy against racial discrimination.

On the same day, in front of the Montreal riding office of Prime Minister Justin Trudeau, on Crémazie and Christophe-Colomb, a sit-in was organized by Stand Up for Dignity to demand that Ottawa and Quebec grant permanent residency to asylum seekers, a large proportion of whom are also of African descent. Although many of them hold jobs that have been declared essential during the pandemic, much remains to be done to ensure that these people, who are praised for their usefulness, don’t feel used.

A little further away, in Repentigny (again, on the same day), people from Black communities marched to denounce the racism and discrimination they report being subjected to by citizens and authorities alike.

If we were to view these three demonstrations from the air, we would see that they cut across the greater Montreal area diagonally, from the east to the west of the island. Three distinct geographical points of mobilization for Black communities, respectively upholding three complementary forms of resistance representing different parts of Black life in Canada, and in Quebec: access to heritage, access to the land and its resources, and access to justice, all gathered on the same day — a day of emancipation.

Catholic Church residential school records belong to survivors and their families
Fairy Creek explained: What’s at stake
Reckoning with ugly history should be a part of Canada Day