Camping is a long tradition in the province, but can it last?

News by
Chen Zhou
August 11, 2021
Photo: A campfire in a B.C. park in 2018. Open fires are currently banned across the province. Photo by Courtnie Tosana / Unsplash.
Your ad here
Automated ads help us pay our journalists, servers, and team. Support us by becoming a member today to hide all automated ads:
Become a member
Share this
0 Comments
Share this
0 Comments

The rampant wildfires in B.C. have not burned out people’s passion for camping, but trips into the great outdoors increasingly look different from those of years past.

Camping is a quintessential summer pastime in the province, and provincial park campsites often book up months in advance, with residents competing for spots when the online reservation system opens (sometimes even crashing the system). Right now though, more than 200 wildfires are blazing across the province, and over 655,000 hectares have burned since April 1. The government has banned campfires, typically a key part of any trip, and evacuation warnings or orders have been issued for many areas.

Now she also keeps an N95 respirator mask with her.

The occasional red sun overhead and yellow smoke remind campers they may not have a chance to enjoy fresh outdoor air. But during COVID-19, camping can be “safer than getting groceries,” according to Steve Kozuki, executive director of the Forest Enhancement Society of BC.

Still, some campers are taking more precautions, not only for their health but also for their personal safety.

As an experienced hiker and backpacker, Vancouver’s Karolina Rozworska always packs extra blankets, clothes and food in case of emergency. Now she also keeps an N95 respirator mask with her because she is sensitive to smoke.

The strongest survival skills become ineffective in the face of a sudden fire, says Rozworska. “It’s limited what can be done for people in the mountains. I rely on the firefighters to keep people safe.”

Whenever she plans camping trips, Rozworska checks conditions online to avoid any smoky areas. At a website called firesmoke.ca, people can see the locations of wildfires.

Kozuki says that in the event of a wildfire onset, the only choice for nearby campers is to escape, so “the best thing for them to keep in mind is to plan their escape route.”

“When a wildfire starts, it’s hot and dry and windy. The fire can grow very, very fast.”

Over time, putting out natural wildfires has created dense tree growth in areas that used to be grassland, making future wildfires bigger and more challenging to fight.

Campers also need to be careful not to cause a forest fire by, for example, discarding cigarette butts that aren't completely extinguished or starting a campfire in a prohibited area.

Due to continued extreme heat and lower than average precipitation, the B.C. government implemented a campfire ban on June 30. Anyone caught violating it can receive a ticket for $1,150. But this hasn’t stopped some people from lighting illegal campfires.

Hiker Gloria Zhang, from Vancouver, witnessed an illegal campfire a month ago in a recreation site. “I went to them twice and told them to put it out, but they showed no reaction, like not hearing my words at all.”

A park-keeper later suggested that if she encountered the same type of situation again, she could approach with her cell phone and say she would call the police if the fire was not put out. The B.C. government asks witnesses to call 1-800-663-5555 toll-free or *5555 on a cell phone to report a wildfire, unattended campfire, or open burning violation.

“In recent years there have been more wildfires than when I first came here,” observed Zhang, who immigrated to Canada 20 years ago. Even in areas with no ban on campfires, people need to be more careful, she said. She recommends always extinguishing campfires with water before going to sleep, and not letting children play with burning branches, something she has seen at campgrounds. 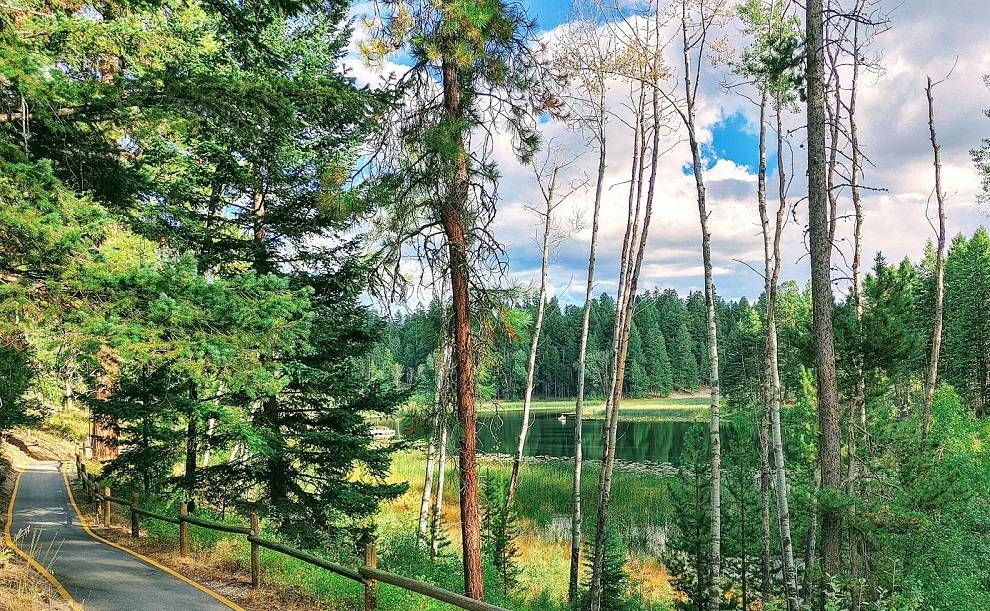 Agur Lake Camp, the only completely accessible campground in B.C. In 2019, fire fuel (debris) in the forest around the camp was removed.
Provided by the Forest Enhancement Society of BC

Fire stewardship in a climate crisis

According to Taylor Colman, a fire information officer with the BC Wildfire Service, on average 60 per cent of wildfires have natural causes such as lightning and 40 per cent are caused by human activities such as open burning, using engines or vehicles, dropping burning substances such as cigarettes, or any number of other actions that can create a spark or a heat source sufficient to ignite a wildfire. The most important part of human-caused fires is that they are preventable.

“It’s becoming increasingly obvious that climate change is altering British Columbia’s landscape,” said Colman. The climate crisis has contributed to drier and hotter summers, and these conditions have resulted in extended wildfire seasons in recent years. “It’s highly likely that this trend will continue.”

She recently cancelled a backpacking trip to Berg Lake Trail. Snow and ice on the mountains had melted in the heat wave, leading to flooding that significantly damaged the hiking trail and forced the evacuation of dozens of hikers by helicopter. Other campers have also cancelled planned trips this summer because of the poor air quality caused by the wildfires.

Some government funding has been put into projects to make campsites more resistant to fire.

Indigenous Peoples have practised forest and land management for thousands of years, yet these practices were prohibited under colonial law.

To reduce the intensity of wildfires, some campgrounds and communities are reducing the number of trees and cutting off the bottom branches to keep any fire on the ground and stop it from spreading too fast.

“The main thing to understand is that the fire is most dangerous when it gets into the tops of the trees. Because the branches at the top of the tree often touch other trees, the fire quickly goes from one treetop to another,” Kozuki said.

In addition to climate change worsening the fire situation year after year, Kozuki points to the long-term suppression of natural wildfires as another factor. Over time, putting out natural wildfires has created dense tree growth in areas that used to be grassland, making future wildfires bigger and more challenging to fight.

Naturally caused wildfires are essential for wildlife and ecology, explains Kozuki. Although some animals prefer living in forest, some animals like bighorn sheep prefer open areas without trees blocking their vision.

Colman also says that a history of aggressive and highly effective wildfire suppression in B.C. has resulted in a significant build-up of forest fuels, greater tree encroachment on grasslands and “in-filling” of open, dry forests in the southern Interior and other areas. This has increased the risk of devastating wildfires and negatively impacted biodiversity and forest health.

The BC Wildfire Service is responding with development of a more comprehensive fuels management and prescribed burning program. The government describes prescribed fire as “the planned and controlled application of fire to a specific area.” It helps reduce the risks and intensity of naturally occurring wildfires. Since these types of burns are planned, any potential impacts of smoke on people can be better managed.

Indigenous cultural burns also reduce the risks of wildfires while strengthening ecosystems by strategically promoting plant growth, which in turn feeds and attracts animal species. Indigenous Peoples have practised forest and land management for thousands of years, yet these practices were prohibited under colonial law. Some First Nations in B.C. are working to restore fire stewardship knowledge and develop cultural burn programs.