‘Running out of time:’ Urgency brings youth back to climate strike

Despite COVID restrictions, Fridays for Future global climate strikes are going ahead in hundreds of cities, bringing out tens of thousands of people around the world.

Last week around 500 people gathered in downtown Vancouver for the first Friday strike since the pandemic hit.

“There are many youths at this event, which is very inspiring because young people are the future,” said Zoha Faisal, a grade 10 student and spokesperson for Sustainabiliteens, a youth climate action group that hosted the event. Most of Sustainabiliteens’ members are high school students from across Metro Vancouver.

Inspired by prominent youth activist Greta Thunberg, the climate strikes became one of the biggest protests in history in 2019. Before COVID-19, the strikes drew huge numbers of students out of class, with demonstrations often reaching tens of thousands of people.

“More than ever, we need to show the federal government that climate justice is a top priority.”

Faisal explained the focus is safety, not turnout, at this point. “We are not looking for numbers like 2019 because 100,000+ people is very hard to manage with [the] COVID situation.”

The number of participants this year was ideal, allowing everyone to be kept safe from the coronavirus through social distancing and mandatory masking, she added.

Participants gathered at Jack Poole Plaza on Friday afternoon, listening to guest speakers before marching down Thurlow St. and chanting.

Faisal said the event was organized to hold the federal government accountable for their broken promises.

“After this election, it is a key turning point, and more than ever, we need to show the federal government that climate justice is a top priority for citizens of Canada everywhere.

“We need an end to all fossil fuels. We need the 94 calls to action from the Truth and Reconciliation report to be implemented, as well as the Indigenous authority. We need a just and green transition. And we need the federal government to not only hear us but listen to us as well,” she added.

Several Indigenous speakers at the event underlined the importance of indigenous sovereignty and recognition of Indigenous leadership on climate action.

“We never once have given consent for corporations like TMX, CGL and Teal-Jones to strip our land of its resources, to rape our land, to take everything that we have,” said Indigenous youth Kílila Raine in her speech.

She described the violence against many Indigenous activists on the front lines as unacceptable, noting that Indigenous land defenders are arrested more frequently, often brutalized while being arrested, and usually given heavier jail sentences.

“The only way to save the land, to save the planet, to save ourselves, is land back. Canada is not a country. Canada is illegitimate. Canada is a colony that the Crown set up on unceded land. This is an illegal occupation of unceded Indigenous land,” she emphasized.

During the strike, people carried signs supporting the Fairy Creek and TMX protests and chanted “stop the pipeline, stop the hate” and “climate justice is racial justice.”

Kwitsel Tatel of the Stó:lo Nation said in a speech that those signs and symbols should be documented so when future generations look back, they can have a glimmer of hope.

“I want to give tribute to each of us as we take our places to put pressure on the Trudeau government, to cancel climate-changing decisions and the waste of taxpayer dollars to do it,” she said. “We must take action to be watchmen of our trees everywhere.”

Faisal said she was motivated by the protests against TMX, which she observed have been entirely peaceful. “We are very against the TMX project. And we believe it needs to be stopped immediately.

“After the strike, our main goal is to keep empowering people, especially the youth, to take action within their own lives,” Faisal said. “The strike has given a huge sense of empowerment, and people who maybe didn’t have the chance to become involved in this sort of movement before now feel the inspiration too.

“We are running out of time to save our planet. If immediate action is not taken, there will be devastating destruction everywhere,” she said, describing the heatwaves and wildfires in B.C. as an indication that the climate crisis is already here and will continue to worsen.

“I think that’s a large part of the calling that pulls young people towards this movement.” 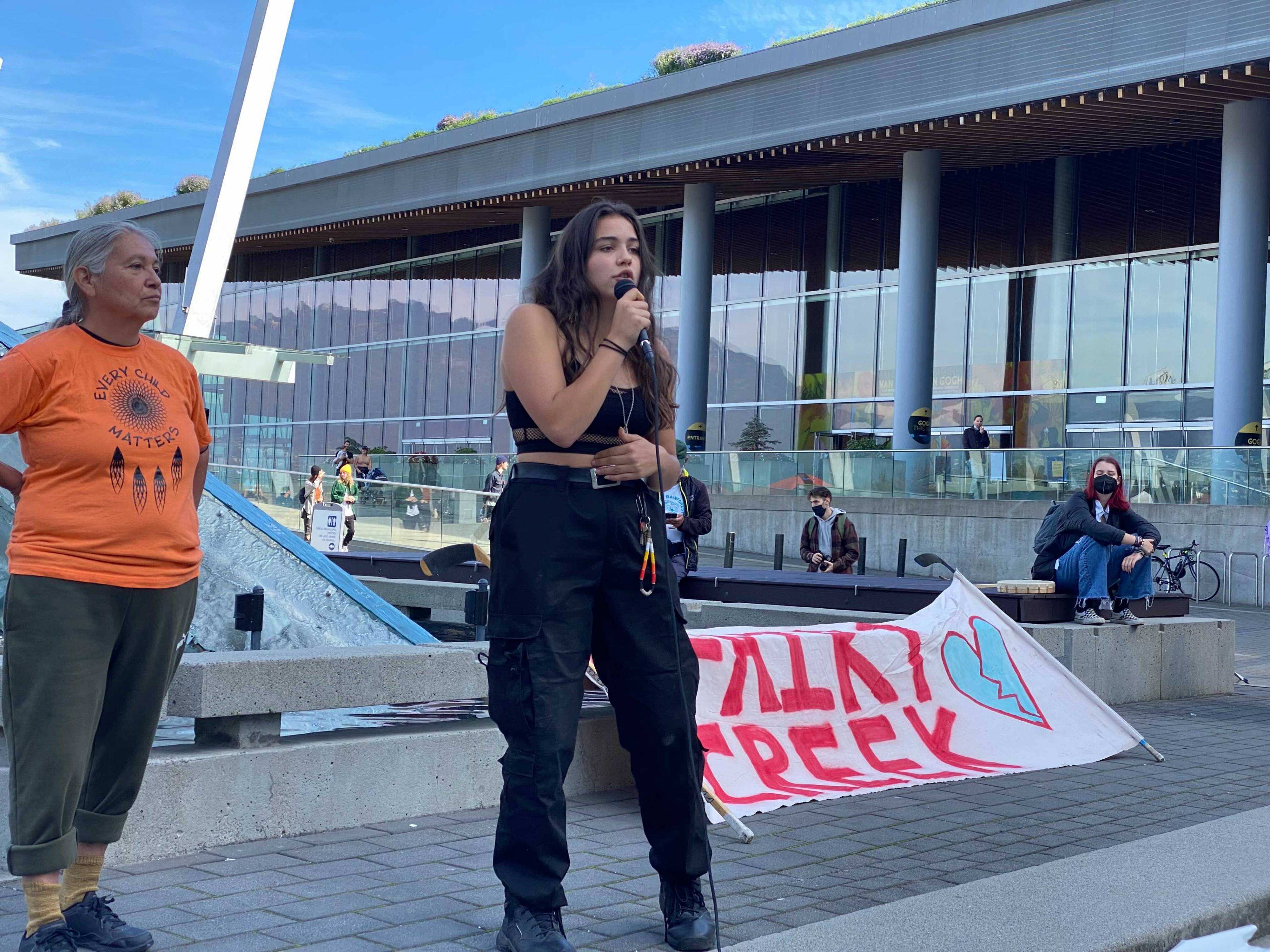 Kílila Raine speaking at the Vancouver climate strike
Chen Zhou
As a top polluter, what is Canada’s responsibility to humanity?
The Dirty Dozen: ‘Carbon bombs’ threaten to blow up Canada’s climate commitments
I was raised in an Indigenous community — but even that doesn’t make me Indigenous