Anti-homeless architecture is bad, agree Montreal mayoral candidates, but it keeps popping up

As Montrealers prepare to go to the polls on Sunday to choose a new mayor, an access to information request is shining a new light on the use of urban design to drive homeless populations out of gentrified neighbourhoods, despite stated opposition from current mayor Valérie Plante and former mayor and current mayoral candidate Denis Coderre.

Over the past few years, a small park in Montreal’s rapidly gentrifying Villeray neighbourhood has had quite the makeover. Benches have been moved, and decorative rocks placed in areas where people used to congregate. The city claims that the changes in Parc Azellus-Denis were an attempt to “revitalize” the park for the borough’s residents, but internal emails tell another tale.

Hostile architecture, also known as defensive design, is the practice of using the built environment to discourage certain activities or groups of people — in many cases, this means those experiencing homelessness. If you take a walk around your neighbourhood or the downtown core, chances are that you’ll find other examples in public spaces.

Montreal, like many other major cities, integrates these features throughout the metropolis. Sometimes the purpose of hostile architecture is obvious. When spikes were installed on the ground in front of the downtown Archambault music store in 2014, the pushback was immediate. Then mayor Coderre tweeted in French: “Anti-homeless spikes are unacceptable!!!!” They were quickly removed.

The borough responded with dozens of administrative emails, providing an illustration of how the city seeks to make public space less accessible to those experiencing homelessness.

In other cases, anti-homeless design is more subtle. “The absence of amenities in public and semi-public spaces is a form of defensive urban design,” says researcher Cara Chellew on her website defensiveTO, which maps instances of hostile architecture across Toronto. “Amenities like benches, picnic tables and public washrooms are thought to facilitate loitering, encourage vandalism, and attract groups of ‘undesirable’ people.”

For years Parc Azellus-Denis was a gathering space for some of the borough’s unhoused residents. They’d sit on the benches underneath the massive iron trellis enveloped in ivy. Throughout the warmer months, they’d share stories and drinks. Sometimes they might become boisterous, or go to the bathroom outside — and they weren’t welcome.

From May to July 2019, emergency services received 32 calls from 17 different callers to respond to Parc Azellus-Denis. An access to information request reveals why.

“Basically, it is always the same individuals who gather in this place,” wrote Michelle St-Onge, SPVM commander of the 31st precinct, in French, in an email dated July 17, 2019. “Drug and alcohol use. They shout. They leave their syringe papers on the ground as well as several other rubbish. They urinate in the park. They sleep on cardboard boxes. They insult passers-by. Etc.”

A few weeks later, the benches were removed, reducing the park to an empty space.

The calls to 911 were accompanied by complaints to city officials. Residents — sometimes as many as three per meeting — attended borough council meetings and addressed city officials during question period.

Several months later, the city installed two bike racks near where the benches used to be. 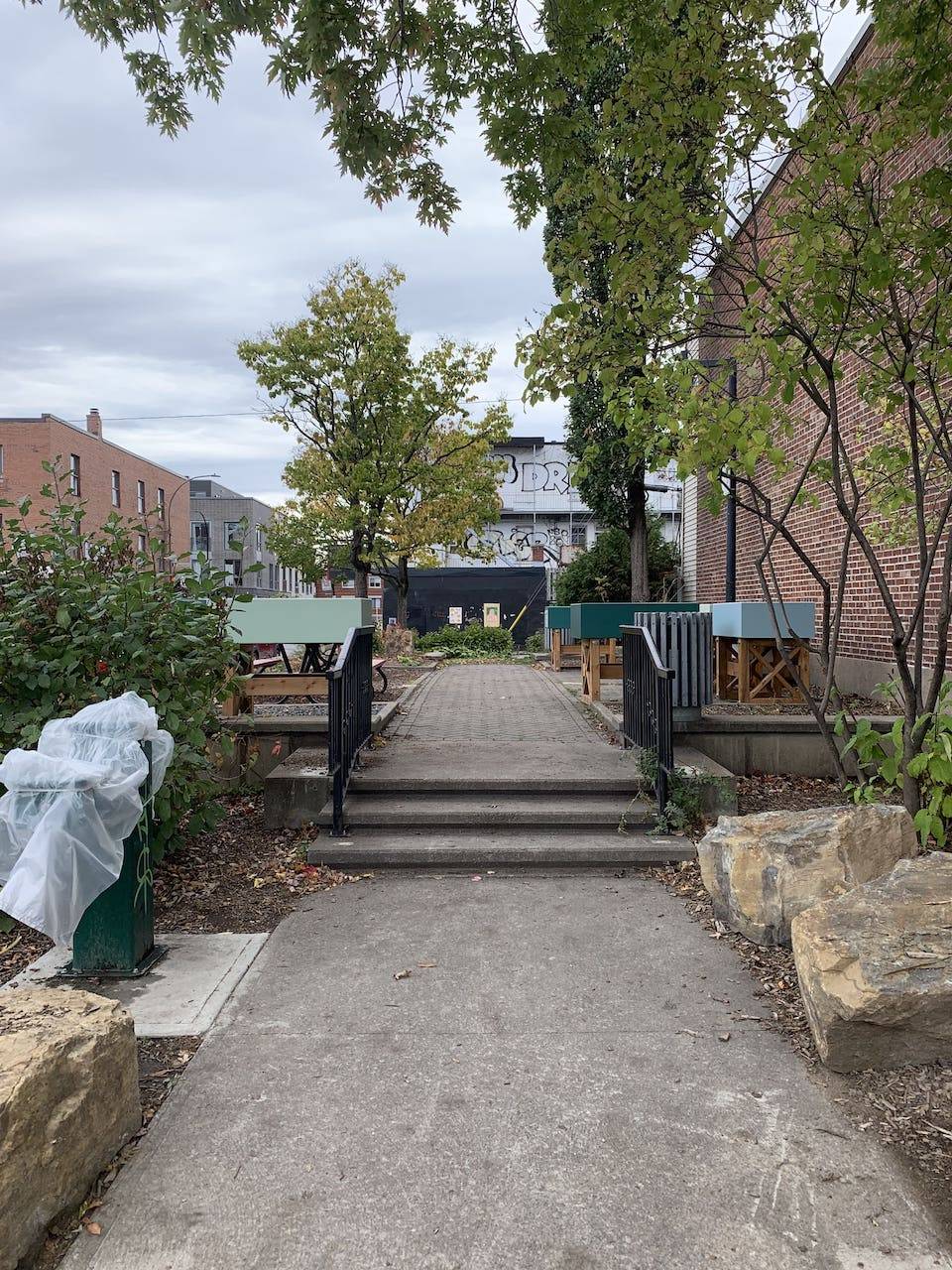 Ricochet filed an access to information request with the borough in December 2020 seeking all recent communications about Parc Azellus-Denis from within the administration as well as from elected officials. The borough responded with dozens of administrative emails, providing an illustration of how the city seeks to make public space less accessible to those experiencing homelessness.

The borough refused to provide any emails originating from or received by elected officials. Ricochet has appealed that decision and is awaiting a decision from the Commission d'accès à l'information. Neither Rosannie Filato, city councillor for Villeray, nor Julie Grégoire, a bureaucrat responsible for community development in the borough, responded to questions sent to them.

The city emails reveal that the benches were removed in reaction to unhoused people spending time in the park. Corresponding with the chief of culture, sports, leisure, and social development for Villeray in June 2020, Elsa Marsot, interim director of the division, writes in French that because “the good weather is back, the issues of homelessness, alcohol and violence are back at Parc Azellus-Denis. ... TPs [city workers] should remove the bench and install the divided benches with flowers.” She confirms the plan in a follow-up email: “The benches will be removed but replaced by others where people can sit, but not lie down.”

The plan didn’t stick though — the removal of benches didn’t align with Mayor Plante’s vision of “cohabitation,” where housed and unhoused residents of the city would live together in “social harmony.”

After months of internal work, a new design was submitted.

The park's new proposed design, as seen in internal emails

The “revitalization” of the park, as city officials called it in internal emails, included many changes and would cost thousands. While on the surface the plan might seem similar to any number of public works projects in the city, an email from Grégoire to a local property owner reveals the intention behind each change.

“In the new proposed plan, many colourful gardening / urban agriculture bins are found along your building to restrict people living in a homeless situation and prevent them from doing their business there, a guardrail would be welded all around the metal structure above the small wall at a height and at a strategic angle to prevent people in a situation of homelessness from sitting or lying down,” she wrote in July 2020 in French.

“As an alternative, benches would be set up near the street for them. There would also be very large decorative rocks strategically placed in the most problematic places where you regularly find people or their feces.”

Despite admonishment from both Coderre and Plante, the redesign plans keep coming and new forms of exclusion are created.

In a phone interview, Marsot said that many of the changes mentioned in the emails were not carried out because “the city decided it wasn’t coherent with the global idea of the project.”

It’s a balancing act between those living in homelessness and people who live nearby who have the right to a certain quality of life, according to Marsot. She said that Pact de Rue, an organization that works with those experiencing homelessness, was consulted on every decision made for Parc Azellus-Denis.

“There was no objective to get rid of the homeless people, that is clear. The objective since the beginning was cohabitation, but also to resolve the hygienic issues surrounding that space,” she said, noting that a storage bin was installed so those living in the park could keep their sleeping gear safe during the day.

Pact de Rue declined to speak with Ricochet for this story.

Last year, as Montrealers were grappling with the pandemic and being told to spend more time outside, the city installed benches with armrests and a 15-minute time limit in Cabot Square, a known gathering space for vulnerable populations and Indigenous people. “No resting at Cabot,” tweeted Nakuset, the executive director of the Native Women’s Shelter. “These new benches were put up yesterday.”

No resting allowed at Cabot????. These new benches were put up yesterday.???? pic.twitter.com/aQG5SkdEWH

The reaction from Mayor Plante was swift. The benches were removed and the blame shifted to the previous administration.

But despite admonishment from both Coderre and Plante, the redesign plans keep coming and new forms of exclusion are created.

Nathalie Goulet is city councillor for Ahuntsic-Cartierville and the executive committee member responsible for homelessness in Mayor Plante’s administration. “Projet Montréal is the only municipal party that has ever addressed issues of housing justice on a systemic level,” she said.

“To prevent and support people experiencing homelessness, there is no one single solution, but there are a range of measures to be implemented, and that is what we are working on”

Gentrification turns poor and unhoused residents, even those who have long lived in a neighbourhood, into problems to be addressed.

Ensemble Montréal, Coderre’s party, did not respond to a request for comment.

Some other contenders have brought different ideas about urban design to the campaign.

“Hostile architecture has no place in our city. Movement Montreal will work to immediately remove and redesign all hostile architecture throughout the city, including and especially public benches and other seating areas,” said Montreal mayoral candidate Balarama Holness by email.

“Movement Montreal is the only party that has crafted its housing policy in direct conjunction with housing advocates, community organizations, and real Montrealers experiencing the devastating effects of previous administrations’ poor housing management.”

Cohabitation and gentrification, an uneasy mix

David Chapman, executive director of Resilience Montreal, questions the idea of “cohabitation” and who it serves.

Gentrification turns poor and unhoused residents, even those who have long lived in a neighbourhood, into problems to be addressed.

“For example, 10 years ago it’s not a problem when someone who is homeless is sleeping on a bench, but when you have a bunch of [expensive] condo developments move into the neighbourhood, the makeup has changed and now all of a sudden that person is a problem…. Now you have people calling the police about that person sleeping.”

“If you’re living in a wealthier area of the city ... your property taxes are a significant amount of money, and with that comes a certain sense of entitlement. People have a sensibility — ‘I’m entitled not to have to look at homeless people.’ The city will get a certain amount of pressure, because after all these are the people who are keeping the officials in business,” said Chapman.

“So much of the bill for local infrastructure is being paid by these wealthier populations. And so yes, the pressure is to keep these populations happy and sometimes to go beyond what is socially responsible in order to keep them happy.”

In an attempt to make the Parc Azellus-Denis architecture a little less hostile, the city had proposed installing a ping-pong table.

The park’s inhabitants “were mostly excited about the ping-pong table,” wrote Grégoire in a September 2020 email. “We will ensure that they are provided with the proper equipment in order to be able to use the table.”

More than a year later, there’s no ping-pong table in sight.

In fact, there’s hardly anyone there at all.