‘I can never stop being Wet’suwet’en:’ Summit strengthens alliances against CGL pipeline

The conflict over the Coastal GasLink project is about more than the fate of a single pipeline or the territory of one Indigenous nation. The precedent set here will have far-reaching consequences, and Indigenous nations and leaders from across Turtle Island are paying close attention.

The hereditary chiefs of the Wet’suwet’en Nation hosted a Peace and Unity Summit in the town of Smithers on Jan. 15. Wet’suwet’en leaders and representatives of other Indigenous nations gathered to offer solidarity and support in the fight against the Coastal GasLink pipeline.

The Wet’suwet’en argue that their Indigenous and human rights, and rights to their territories, are threatened by the multibillion-dollar project, which is backed by the provincial and federal governments.

Their fight to stop the LNG pipeline has been gruelling, stretching over several years and multiple police raids of resistance camps on unceded Wet’suwet’en lands. Militarised police patrols and harassment of those they encounter have become a regular occurrence on the Wet’suwet’en Yintah (territory). Officers have violently arrested and jailed numerous land defenders under the authority of a colonial court’s injunction.

“... you show me where the queen walked, and I’ll show you where my ancestors walked…”

The latest raid, in November, saw over a dozen land defenders and two journalists arrested at gunpoint. The RCMP appeared to be gearing up for another raid this month, until the land defenders made the strategic choice to withdraw from Coyote Camp. The camp had blocked access to a Coastal GasLink drill site they will use to bore under the sacred Wedzin Kwa (Morice) river.

At the time Sleydo’, part of the Gidimt’en (Bear) clan of the Wet’suwet’en Nation, stated that land defenders intended to block drilling under the river by any means necessary, but did not want to provoke another raid that would lead to more arrests and more land defenders being barred from their own territory by bail conditions. 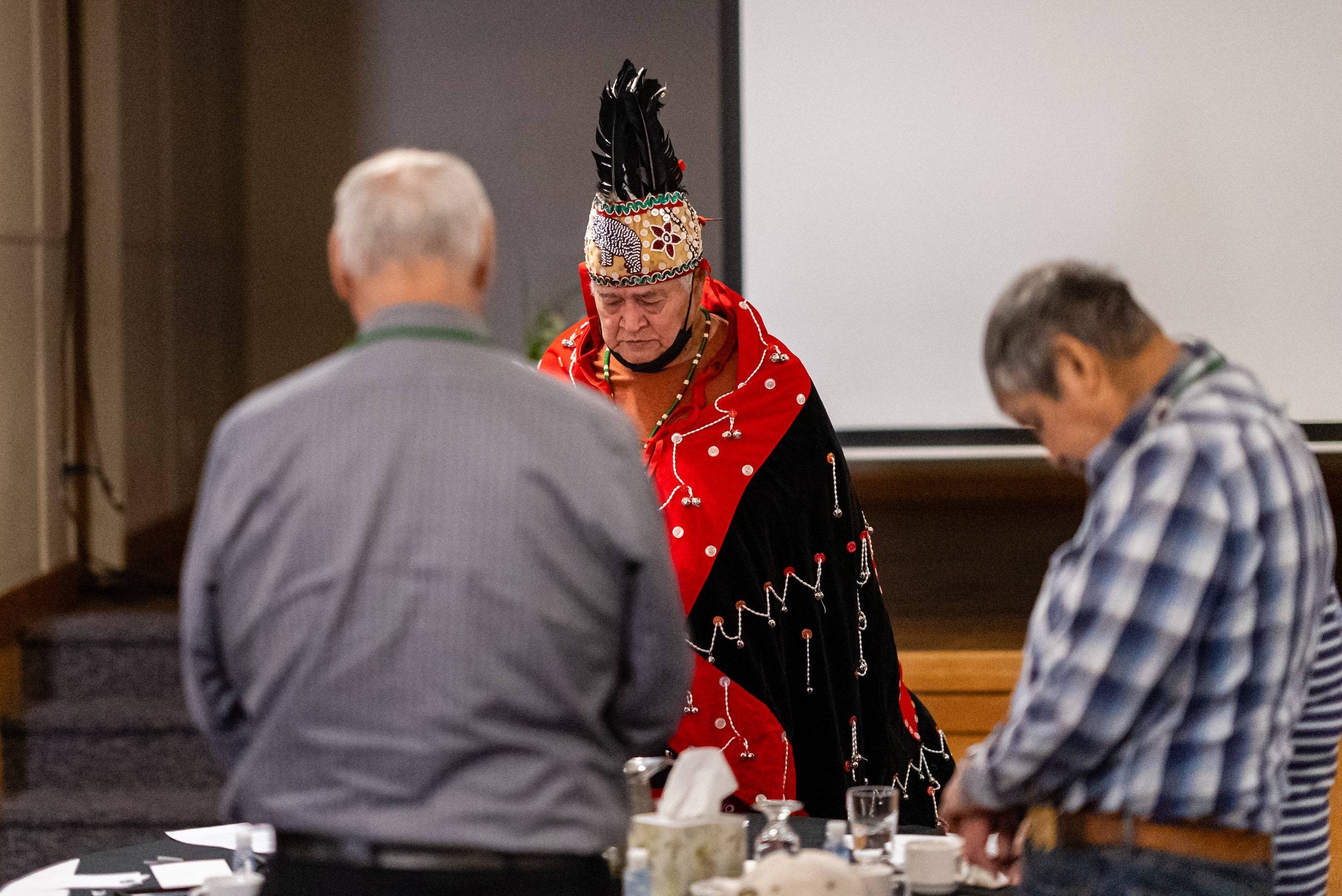 Cheif Madeek and others during the summit
Arvin Singh

It’s lonely on the front lines

Hereditary Chief Woos of the Gidimt’en clan, whose territory was swarmed by police armed with sniper rifles, attack dogs and chainsaws in November, explained during the summit that despite solidarity and support from around the world, it is lonely on the front lines. But he draws inspiration from the legends and teachings of his ancestors.

“In our legends every man, every woman has fears,” he told those in the Hudson’s Bay Lodge banquet room in Smithers, and those tuning in online. “But this is about our kids, the little ones — your kids, your grandkids, your great-grandkids. And when you put a little one in front of you, all the fears go away. Because you’re protecting that little one.…” He gestured towards his heart, where a bear claw necklace adorned his chest.

Madeek, another hereditary chief of the Gidimt’en clan, dressed in elaborately decorated black and red regalia and a headdress featuring a glittering beaded image of a bear, spoke about the greed of colonialism and how it took nearly everything away from Indigenous Peoples. The Wet’suwet’en, he said, are saving what’s left before the pipeline “takes everything away from our territory.”

“That territory is the only thing that the Wet’suwet’en have,” he said. “They (governments) talk about Crown land. I tell them, you show me where the queen walked, and I’ll show you where my ancestors walked.… [We do this] for our grandchildren and our great-grandchildren that are not even born yet, that they can walk and enjoy the territories that we do today.

“We’re not begging for attention, yet it comes to us in the worst form. You gotta hear us, stand up, be strong and talk with one voice.”

He went on to say that Indigenous Nations are integral to protecting the planet, adding, “You’re gonna win. You already won… Be safe and be strong.”

Gidim’ten Clan Hereditary Chief Gisday’wa spoke of his hunting cabin, burned down two years ago near the Coastal GasLink pipeline route. He stated at the time that the culprits, two young men from nearby Burns Lake, were motivated by racism. He correlated it with being forced to move from Smithers when he was a child after his family home, along with other First Nations homes, was burned down by settlers. Now in his 70s, he foresees the most serious dangers of climate change will soon arrive in the north.

“The creeks are drying up. I saw the flooding and all the wildfires,” he said, referring to the intense disasters that have plagued B.C. over the past year. “It’s all coming up this way too. It’s bringing an end to the world that we love and are trying to protect.”

Sleydo’ (Molly Wickham) is a Wet’suwet’en mother and land defender, also from the Gidimt’en clan, who was arrested and jailed for five days in November. She addressed attendees via video conference. 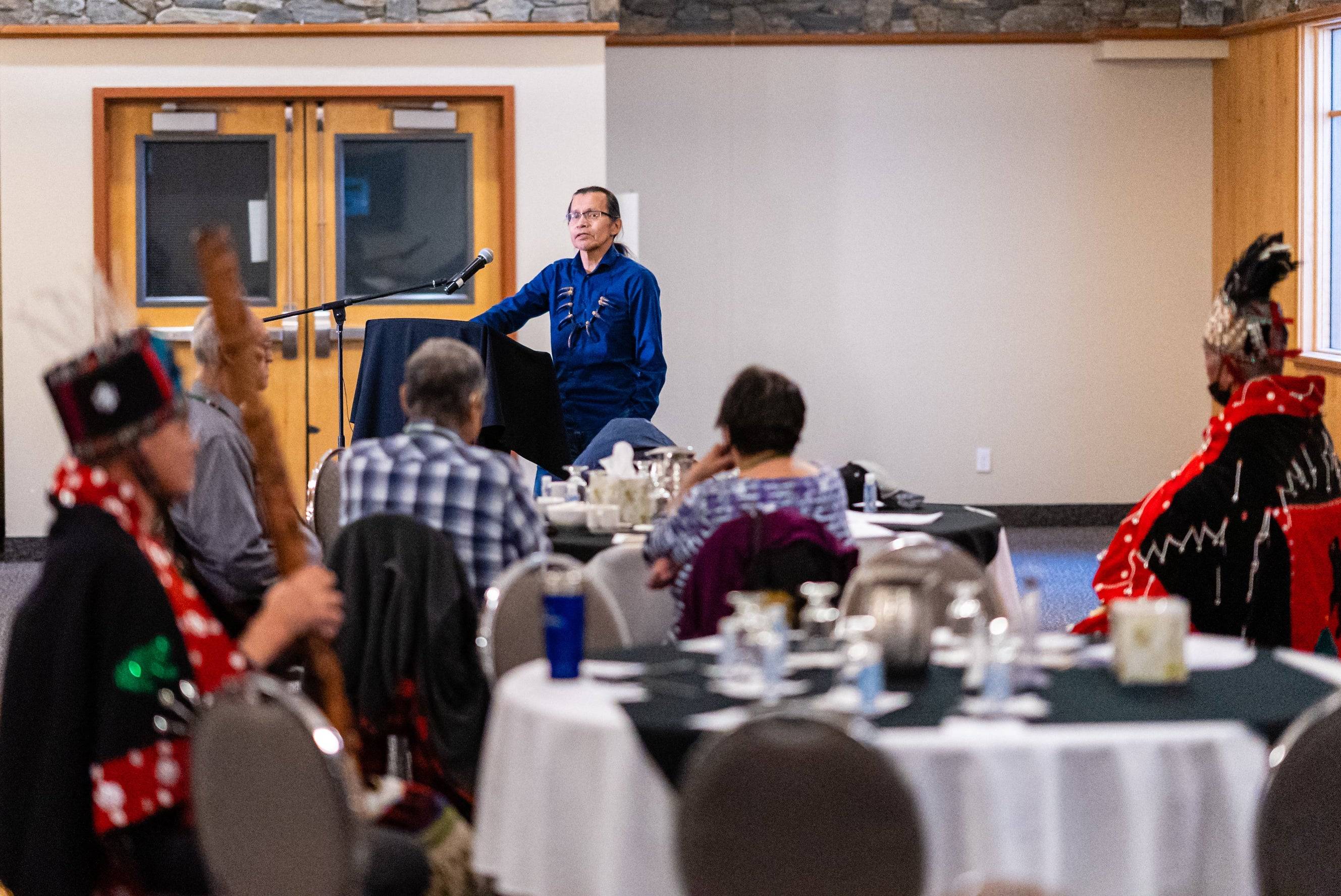 Roseanne Archibald, National Chief of the Assembly of First Nations, also joined the gathering via video conference and condemned the treatment of Sleydo’ and other water protectors.

“I’m standing in support of land defenders and chiefs and all Wet’suwet’en people in their pursuit of justice and equality,” Archibald stated. “The Crown is selective on which constitutional laws they choose to honour and enforce. In this case, the economic interests have been given preference when it comes to upholding what they call the rule of law.

“The rule of law also includes constitutionally-protected treaty and inherent rights. The government always takes an opportunity to exploit divisions within Indigenous communities.”

She went on to discuss her Healing Path Forward initiative, formed to mend divisions created by colonial governments.

“All levels of government must stop criminalising our people when they’re exercising and asserting their inherent treaty rights. The Healing Path Forward means that militarised police against First Nations people must end.… This is contrary to the principles of reconciliation. I stand with you.”

Greg Knox, executive director of the SkeenaWild Conservation Trust, is also a resident of Terrace in northern B.C. He took to the mic to express his solidarity, saying he felt sick about the situation.

“The governments are allowing companies to get away with environmental violations and not enforcing them,” he said. “They’re not being held to account for any of it. Now compare that to the RCMP machine guns. Can you imagine if they showed up to your home and tried to chainsaw their way in and arrest you?”

Gavin Smith, an environmental lawyer with West Coast Environmental Law, added that the precedent-setting 1997 Delgamuukw vs. British Columbia decision by the Supreme Court of Canada is taught in every law school in the country. That decision affirmed the title rights of the Wet’suwet’en and their neighbours the Gitxsan to their lands, and recognized the authority of the hereditary Chiefs. He said Canada is contradicting its own laws by allowing Coastal GasLink to trespass on Indigenous territories.

“At the most fundamental level Canadian legal and political systems have spent years failing to uphold and implement the most basic and important promises that they have held up.

“The courts have affirmed that Canada is bound to recognize and respect that title. But a key problem has been that the Crown has been allowed to benefit from its own inaction.… B.C. made technical arguments to deny Aboriginal title for over 20 years.”

He argued that courts and governments should enter into collaborative agreements with Indigenous Peoples recognizing their title and jurisdiction and properly implement the United Nations Declaration on the Rights of Indigenous Peoples, which B.C. adopted into law in 2019.

Indigenous leaders from several nations around so-called Canada and the United States participated in the summit, emphasising that the fight will only be won when they stand together.

“This is about peace and unity. Not once have the Wet’suwet’en been violent,” said Namoks, Wet’suwet’en hereditary chief of the Tsyau (Beaver) Clan. “Not once did we ever say we were going to give up either. This is home. You truly have to stand on the land, breathe the air, drink the water to know why we do what we do. And the more people that come in peace to protect and enjoy, the better it is for the entire country of Canada.

“When you drink out of a river, or a stream or a lake, you gotta realize there are not many places on this planet you can actually do that. Why can’t we do that? I don’t want to be on a list of having to deliver water to us.… Those glaciers are there to nourish us.

The Wet’suwet’en hereditary chiefs concluded the summit by signing a declaration affirming their rights, and demanding that Coastal GasLink and the police pull out of their territories.

Ultimately, the Wet’suwet’en hereditary leaders, land defenders and their allies say they’re not giving up. As Chief Woos put it, they won’t “sit back” while their survival is threatened. “I’m not going to relax until we are safe, until our land is safe for them kids, and intact. We are here to honour the teachings. Hunting, trapping, fishing and being out on the land is our priority right now.” 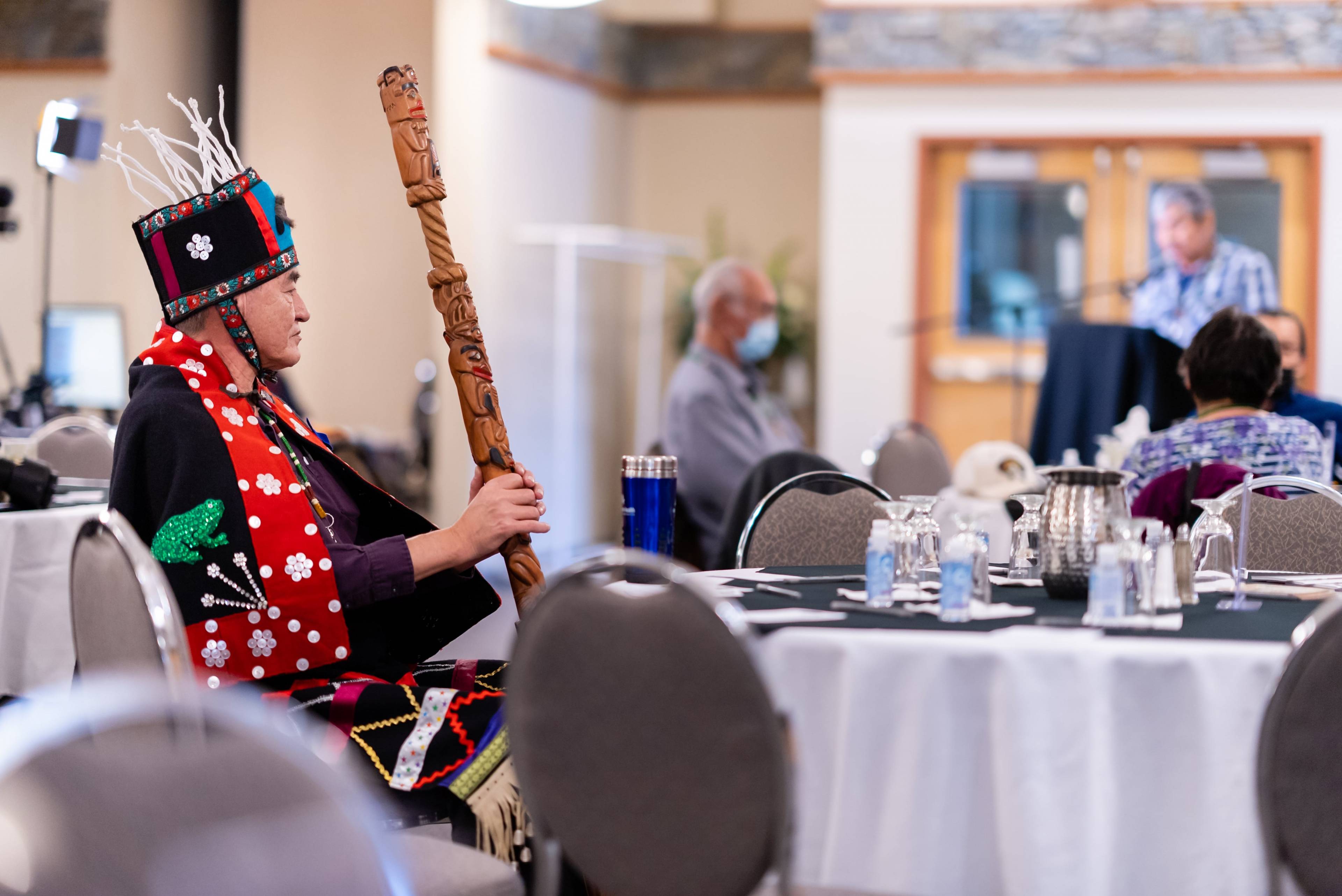 Chief Namoks at the summit
Arvin Singh
As a top polluter, what is Canada’s responsibility to humanity?
The Dirty Dozen: ‘Carbon bombs’ threaten to blow up Canada’s climate commitments
I was raised in an Indigenous community — but even that doesn’t make me Indigenous