Corporate prosecutions of land defenders could be coming to Canada

A B.C. Supreme Court judge invited CN to prosecute a Gitxsan hereditary chief when public prosecutors declined to do so

On the side of the road just past a bridge that crosses over the Canadian National Railway tracks in New Hazelton, B.C., sits a small tent structure. Inside, pensively warming his hands over a fire on a cold January day, sits Chief Spookw, hereditary chief of the Lax Gibuu (Wolf Clan) of the Gitxsan Nation.

This is Lax Gibuu territory — ancient, unceded. The tent is symbolic, an assertion of Gitxsan sovereignty in the face of CN encroachment that started over a century ago when the rail line was built. The Gitxsan have never given up their rights to the land, but the colonizing governments claimed it for their own anyway.

“They have not paid any rent for the use of that land in 120 years,” says Spookw, his voice thick with conviction. And now they’re “accusing us of trespass on our own lands.” 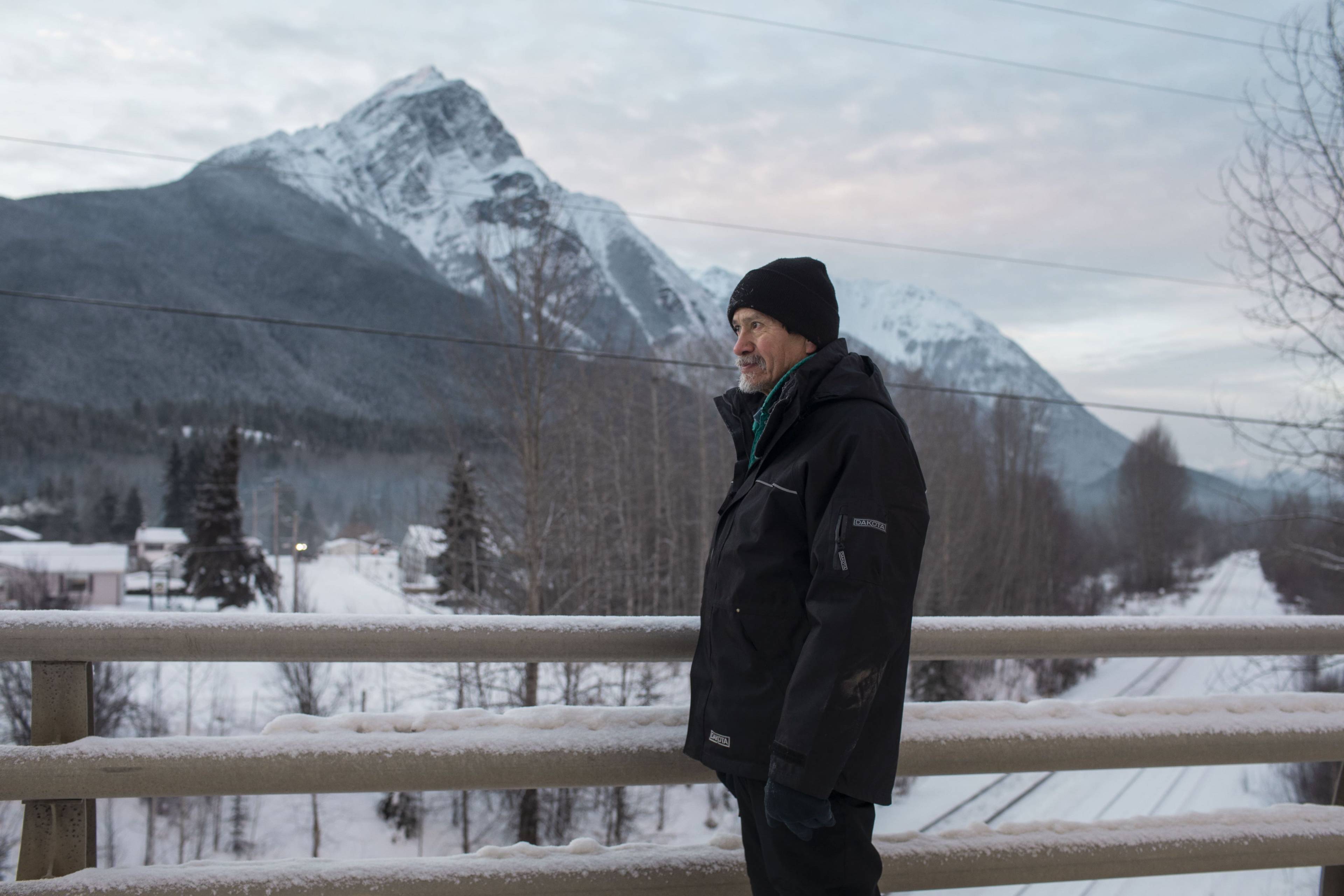 In February 2020, Spookw was arrested alongside a dozen other land defenders who blocked the rail line in New Hazelton to express solidarity with the Wet’suwet’en fight to stop the Coastal GasLink natural gas pipeline from crossing their territories. It was a moment of outrage and humiliation for the Gitxsan, as they watched one of their hereditary leaders led away in handcuffs.

“No one in our group had ever been arrested prior, including me. So I told the people involved that no one else was to be arrested with me, that I would do it alone. But there were people that just stood beside me and said, ‘No, we’re not leaving.’ It was uplifting for me. The strength of our people was there.”

“They’ve been infringing on our right and title for over 120 years.”

The rail blockade followed militarized police raids on Wet’suwet’en checkpoints that were preventing Coastal GasLink from continuing work. Soon, dozens of other blockades popped up across the country, halting key transportation routes across Canada for weeks. Court injunctions ordering the removal of the blockades soon followed.

“The Gitxsan have the exact rights and title the Wet’suwet’en hold to their land. Through the Delgamuukw-Gisday’wa court case it was determined that our rights and title haven’t been extinguished. They still exist from the beginning of time,” explains Spookw. The Delgamuukw-Gisday’wa decision is a 1997 Supreme Court of Canada ruling that upheld the authority of the hereditary leadership of the Wet’suwet’en and Gitxsan over their unceded territories.

“So I got arrested to bring forward the title issue. If CN was willing to go into court and battle over title then yes, they are following a course that I set in place. This title issue has to be dealt with. They’ve been infringing on our right and title for over 120 years.” 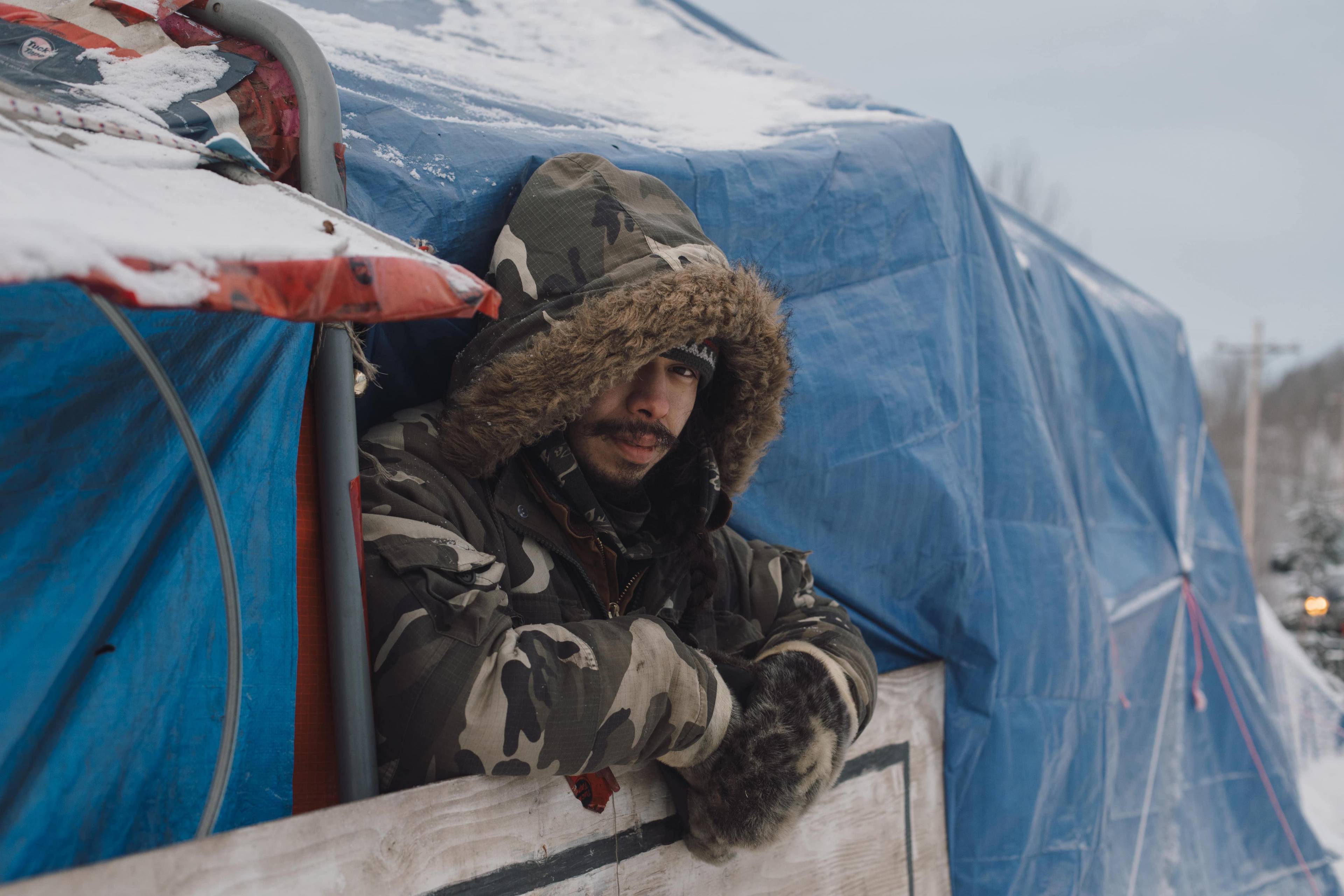 Kolin Sutherland-Wilson, a member of the Gitxsan Nation, at the railway camp
Amber Bracken

The threat of corporate prosecutions

The B.C. Prosecution Service decided in December 2021 not to press criminal charges against Spookw and the other land defenders, finding that doing so “was not in the public interest.” But that wasn’t the end of it.

Justice Ward Branch of the B.C. Supreme Court, the same judge who issued the injunction against the Gitxsan blockade, argued in an injunction hearing that the prosecution service was “not the sole arbiter of the public interest.”

“While the BCPS [B.C. Prosecution Service] has expertise in assessing and pursuing criminal offences, the court undoubtedly has its own expertise in protecting the administration of justice and ensuring respect for the courts,” Branch said during a hearing for those charged with breach of the civil injunction.

“It’s important that corporations be challenged. I’m concerned with the power of corporations when they walk into court.”

Branch then offered CN the opportunity to prosecute three of the Gitxsan land defenders, including Spookw. That rather unprecedented threat of private prosecution has hung over them ever since.

CN indicated it could hold those involved liable for losses of up to $135 million per day of the blockades. A conviction could come with a prison sentence of up to five years.

For weeks after Branch’s invitation to CN, there was only silence from the corporation. During this time Spookw and his lawyer, Martin Peters, prepared to go up against a multi-billion-dollar corporation in court.

“We are talking about a lack of resources,” says Peters, a Vancouver-based lawyer. “Because these are poor people, they don’t have millions of dollars.”

“When we’re dealing with CN, they have a lot of money and it’s difficult. The lawyers they hire are very good lawyers.”

In a January email responding to questions from Ricochet, a spokesperson for CN wrote that the company wasn’t planning on pursuing criminal charges at that time and was “satisfied that this injunction was ultimately enforced.”

But Spookw and Peters aren’t convinced CN won’t eventually follow through and press charges at some point down the road.

Peters is determined to see this case through, despite the challenges, because he sees the use of private prosecutions as a threat to Indigenous rights.

“It’s important that corporations be challenged. I’m concerned with the power of corporations when they walk into court. The ease with which corporations can obtain injunctions which affect First Nations’ rights is troubling,” he says.

“When that impacts First Nations, First Nations land, what we are comparing here is not private rights. They’re sovereign rights, rights protected by the constitution. And that analysis seems to never happen, or if it happens it happens far too late in the game.”

“It’s very important these matters be litigated.” he says, adding that litigating Indigenous rights is nothing new. “First Nations rights have been trampled for centuries.” 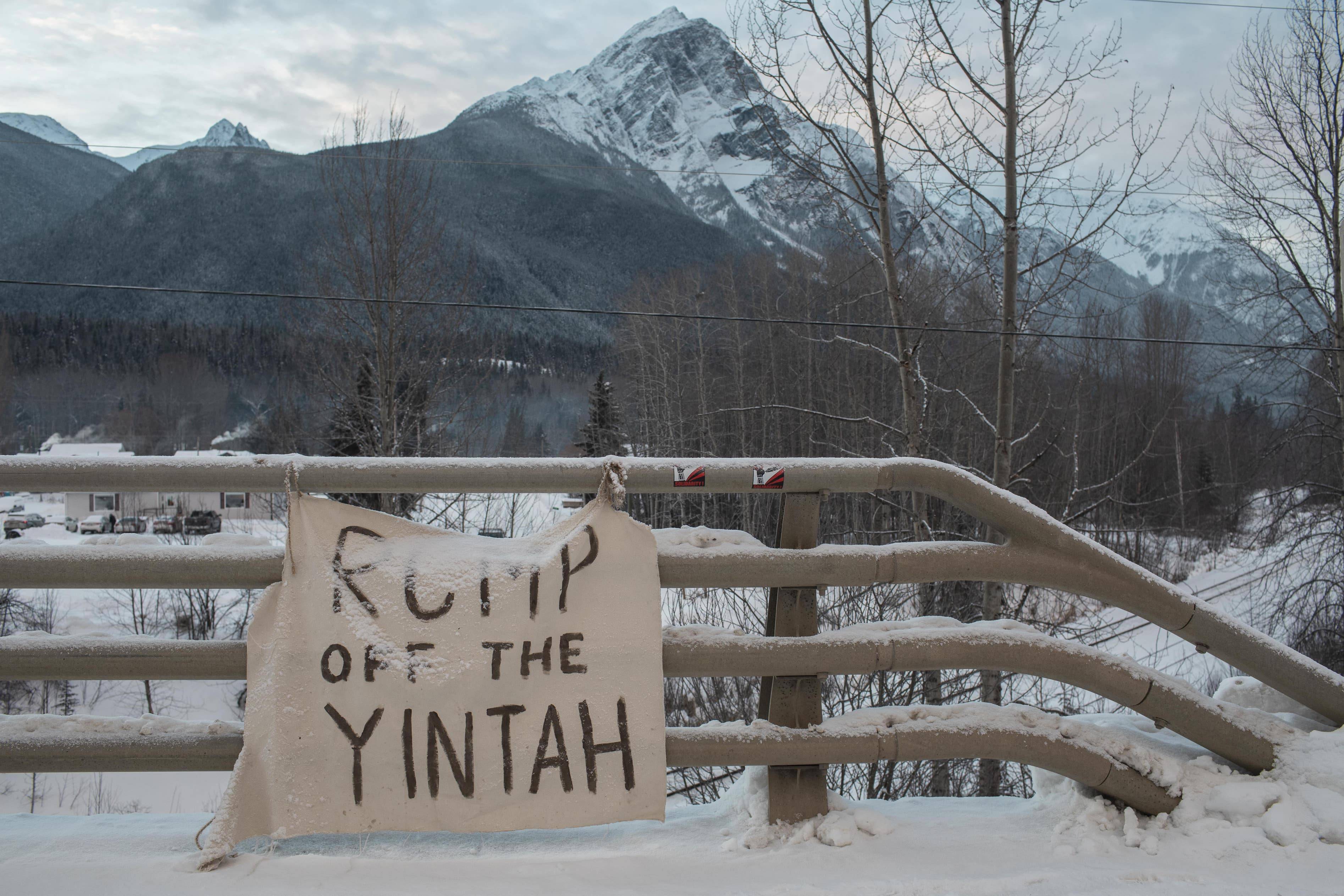 A sign hangs on the overpass above the CN tracks in New Hazelton, B.C.
Amber Bracken

The wrath of Chevron

The threat of a private corporate prosecution of Indigenous land defenders is a troubling development in the Canadian legal system — and draws comparisons to a high-profile case south of the border.

Steven Donziger, a U.S.-based Indigenous rights advocate and environmental lawyer, has for years been at the heart of one of the most high-profile cases — pursued by one of the world’s largest oil and gas companies.

Donziger represented a group of 30,000 Indigenous plaintiffs in Ecuador who brought an action against Chevron for polluting their lands in the Amazon rainforest. In 2011 he led a legal team that won that case, securing a $9.5-billion judgement for his clients in an Ecuadorian court.

But when Donziger tried to collect payment for the Indigenous plaintiffs, Chevron launched a civil lawsuit accusing him and others of obtaining the judgement by fraud. A judgement Donziger says has been upheld by multiple appellate courts, as well as the supreme courts of both Ecuador and Canada for enforcement purposes.

Donziger believes Chevron is trying to evade its responsibility to compensate the Indigenous Peoples whose land it destroyed.

Lewis A. Kaplan, a New York judge and former corporate lawyer, then sought to charge Donziger with contempt of court for refusing to turn over records of privileged client correspondence stored on his laptop and cell phone to Chevron. When the federal prosecutor decided not to prosecute his proposed charges against Donziger, Kaplan took the unprecedented step of appointing a private law firm which represented Chevron to prosecute him. Something Donziger calls “a flagrant conflict of interest.”

This private law firm had Donziger placed on house arrest and fitted with an ankle monitoring bracelet in August 2019 while awaiting trial. He remained on house arrest throughout the court hearings, wearing an ankle monitor for over 900 days. All for a misdemeanor charge with a maximum sentence of six months in jail. The longest sentence ever given out to a lawyer on a contempt charge in the state of New York, Donziger points out, is 90 days.

“It’s a complete disaster for the rule of law in Canada that it’s happening, as it is in the United States of America.”

In July 2021 a judge convicted Donziger without a jury, and sentenced him to six months in jail without credit for the time he had already spent under house arrest. He began serving his sentence in October, but was released on December 10 to serve the rest of his sentence at home.

Donziger sees parallels between his experience with Chevron and the Gitxsan battle with CN.

“It’s a complete disaster for the rule of law in Canada that it’s happening, as it is in the United States of America,” says Donziger from his apartment in Manhattan, where he remains under house arrest.

Donziger says his prosecution and the threatened prosecution of Chief Spookw are the only two examples of private corporate prosecutions he knows of, but cautions that big fossil fuel, mining and rail corporations will follow this blueprint, “if they can get away with it.”

“There is a playbook in the industry to go after Indigenous Peoples or their lawyers who are effective at asserting their legitimate tribal rights to their territories.” 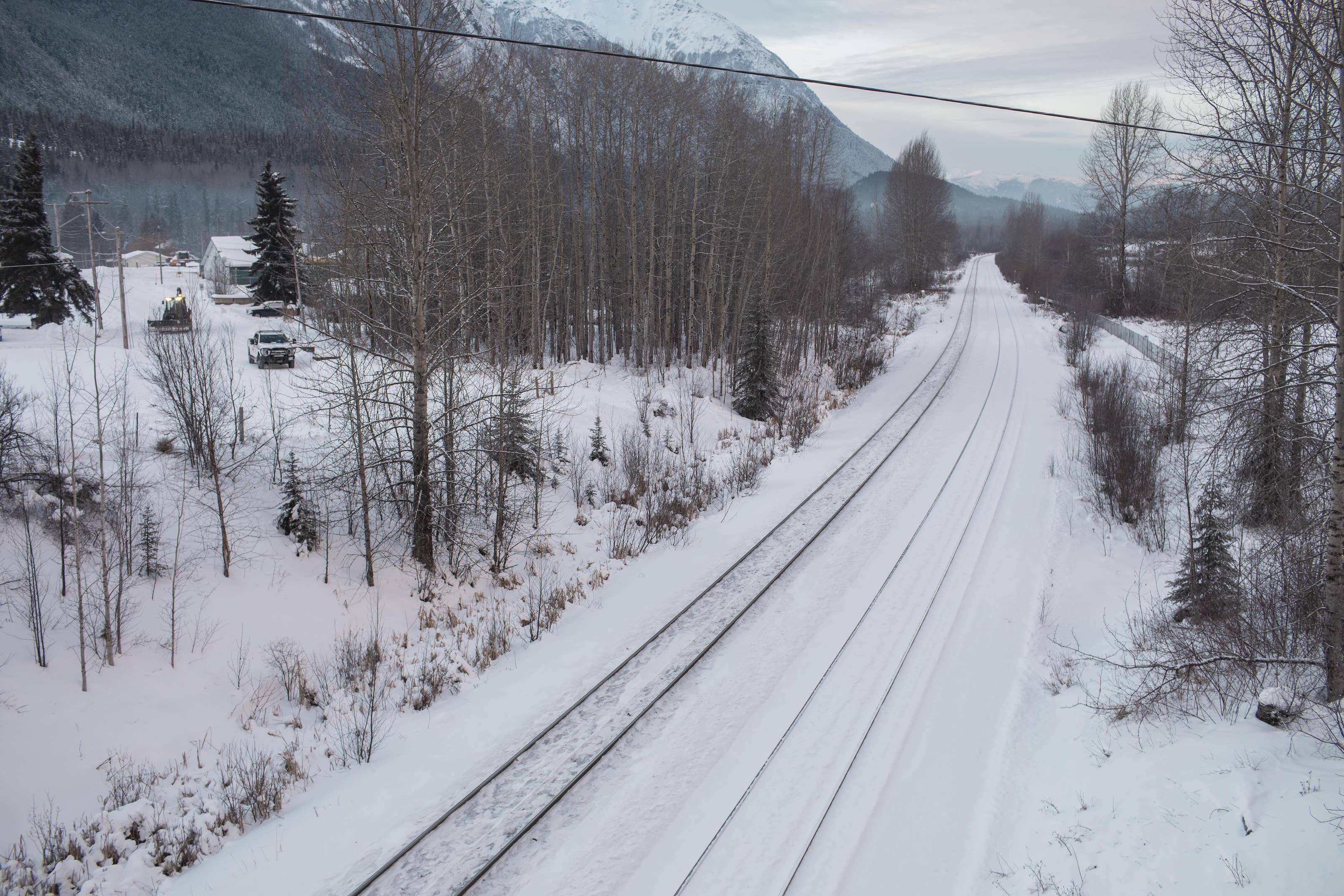 He says Chevron and CN are resorting to SLAPP lawsuits — short for strategic lawsuits against public participation — to throw their power around in the courts. But it’s a façade, he adds.

“SLAPP suits are lawsuits designed to harass and silence activists. All SLAPP lawsuits look normal on the surface — trespassing, violating an injunction or in my case contempt of court. They just hide the true purpose through the technical esoterica of the law.”

And it’s a tactic corporations are using to legitimize the exploitation of Indigenous lands.

“They’re abusing the law to silence those who call out the illegitimate exploitation of Indigenous lands — that’s what this is about. It’s an industry playbook to neutralize the rights of Native people on their own land. I mean, how do you accuse a hereditary chief (Spookw) of trespassing on his own land? It’s a joke. It’s absurd.

But “if you don’t understand the history, it actually looks legitimate. That’s the danger of these legal actions.” 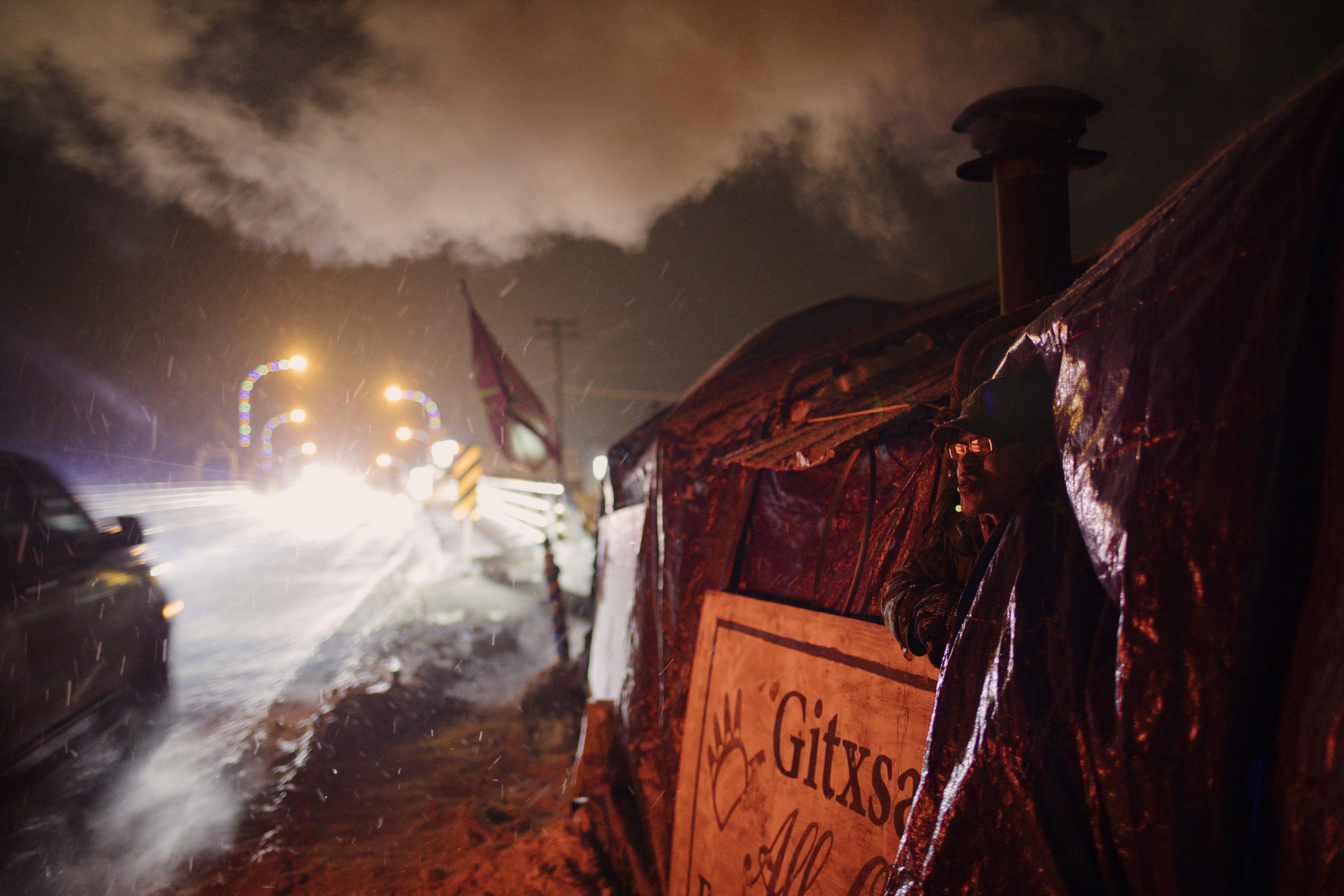 Donziger believes the fossil fuel industry’s fight to subvert Indigenous rights over their lands and resources is the biggest conflict of the modern era. And he’s throwing his support behind Spookw and other land defenders on the front lines of protecting their rights.

“Indigenous rights to control their own territory is critical to protecting the earth, because those are the frontline defenders of the planet. Most oil and mining and gas resources are under Indigenous territory. I would say the survival of the planet hangs in the balance as to how that works out.”

Although civil charges for violating the injunction against blocking the rail line have yet to be pursued against Spookw, in the over two years since his arrest he’s been subject to conditions that prevent him from being in the vicinity of the railway track. Peters is preparing to ask the courts to do away with those conditions, and the injunction itself.

In the meantime, Spookw is ready to stand trial if it comes to that.

“If we go into a title action, as in Delgamuukw, we will have to go in and bring all of our evidence,” says Spookw, large snowflakes falling on his shoulders as he motions to the train tracks below.

“Which is totally ludicrous because we’ve done it already. We have 10,000-plus years of history here, and Canada has been here how long? That should be the end of the story. It should be over. But Canada and the province are simply running on the fly.” 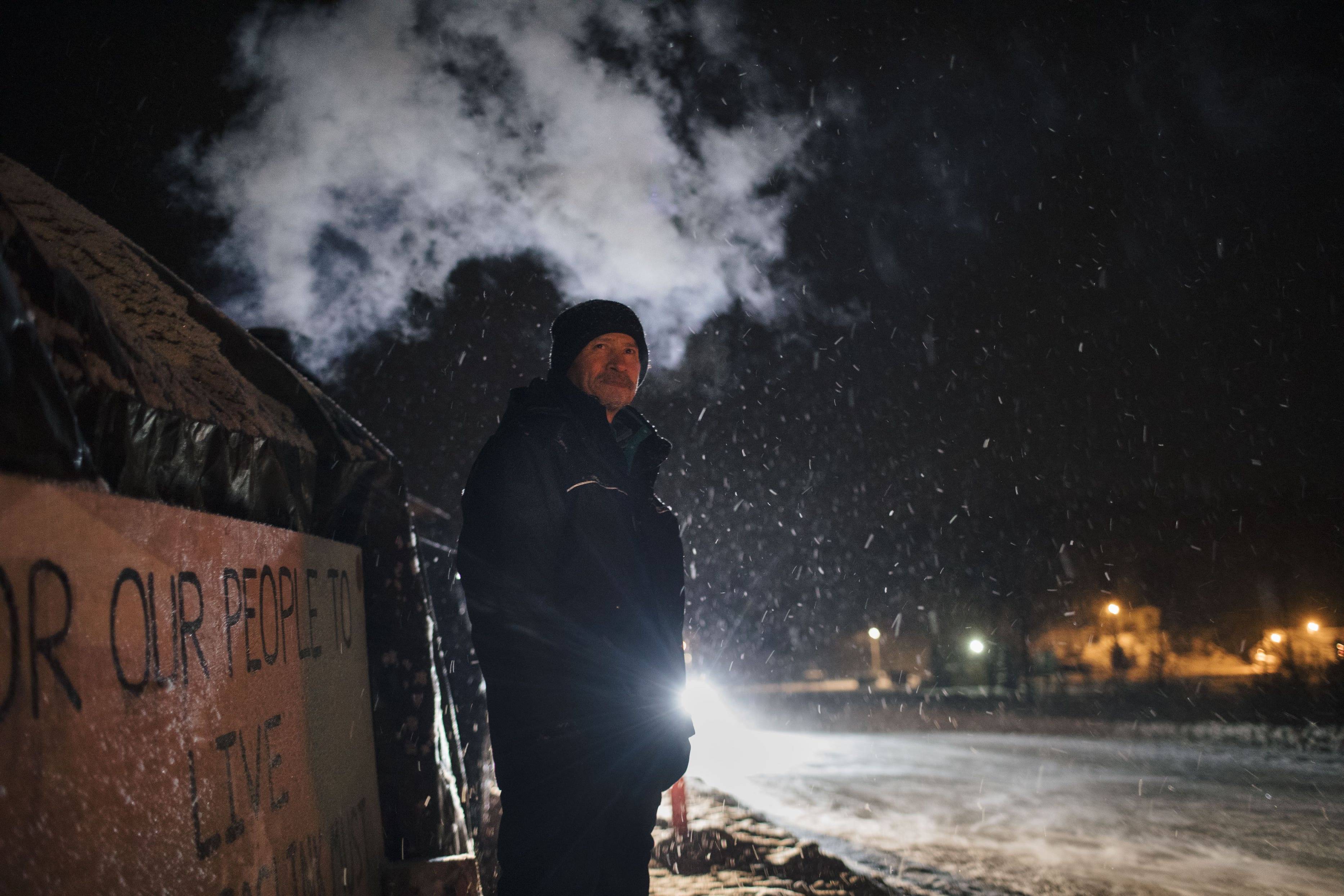