Two million acres of forests and farmlands, and home to dozens of species at risk, could soon be paved over

Despite a nexus of multiple crises this year, highway infrastructure has emerged as a key issue in the Ontario election, and hanging in the balance at the ballot box is the future of the province’s Greenbelt.

It’s the homestretch of the 2022 election campaign. This is the last chance for the party leaders from the Progressive Conservatives, Liberals, NDP, and Green Party to make their final pitch to voters before voting day on June 2.

The climate question at issue is whether to build or cancel Highway 413 — Premier Doug Ford’s controversial project, plowing through the Greenbelt.

Ford touts the proposed plan as the only solution in unclogging gridlock traffic in the Greater Toronto Area, despite strong criticism, and evidence to the contrary, from several environmental advocacy groups, academic experts, and community members.

Nearly 60-kilometres long, Highway 413 is set to run across the northwestern part of the GTA, from Highway 400 at northern Vaughan to the highways 401 and 407 interchange at the western edge of Mississauga and Brampton. It is considered one of Canada’s most important stretches of protected farmland, forests, wetlands, and watersheds.

The Greenbelt and its unique biodiversity is at risk, critics say, and developing the protected area will further open the province up to more urban sprawl and accelerate the climate crisis.

On the chopping block is 400 acres of Greenbelt

Created in 2005, the Greenbelt is one of the most biologically rich areas in all of Canada. Stretching up to two million acres of forests and farmlands, it is home to 78 of the 200 provincially listed species at risk in Ontario like the bobolink, redside dace, and Jefferson salamander.

Jefferson salamander, one of the many species at risk that are in danger. Experts say new highway development means migrating wildlife movement will be blocked and thousands of animals will be killed.
York Region

According to the Greenbelt Foundation, the area encompasses 4,782 of protected farms, including specialty crop areas such as the Holland Marsh, and the Niagara Tender Fruit and Grape area.

The highway will remove more than 400 acres of Greenbelt, including a portion of the Nashville Conservation Reserve in Vaughan, according to Debbe Crandall, the former executive director of the Save the Oak Ridges Moraine Coalition.

A second highway connecting the 400 to the 404, known as the Bradford Bypass, has also been a big part of the Ford campaign.

Recent research maps released by Gravel Watch Ontario, Simcoe County Greenbelt Coalition and Environmental Defence point out that the two highways will not only pave through protected greenspaces and farmlands, but also increase truck traffic during construction and a reduction in air quality.

Bryan Smith from Gravel Watch Ontario said that there is no net benefit of the proposed highways.

“In fact, the rock, sand and gravel extraction arising out of the projects will negatively impact communities up to 50 kilometres from the proposed routes,” he said.

Undaunted by criticism, and against all available climate science, Ford has staked his election campaign on his promise to build the two highway projects.

Ford claims that Highway 413 is needed to relieve congestion and save 30 to 35 minutes of commuter’s time. The project was initially scrapped by the Ontario Liberals in 2018 after a panel of experts deemed that the highway would save no more than 30 to 60 seconds. 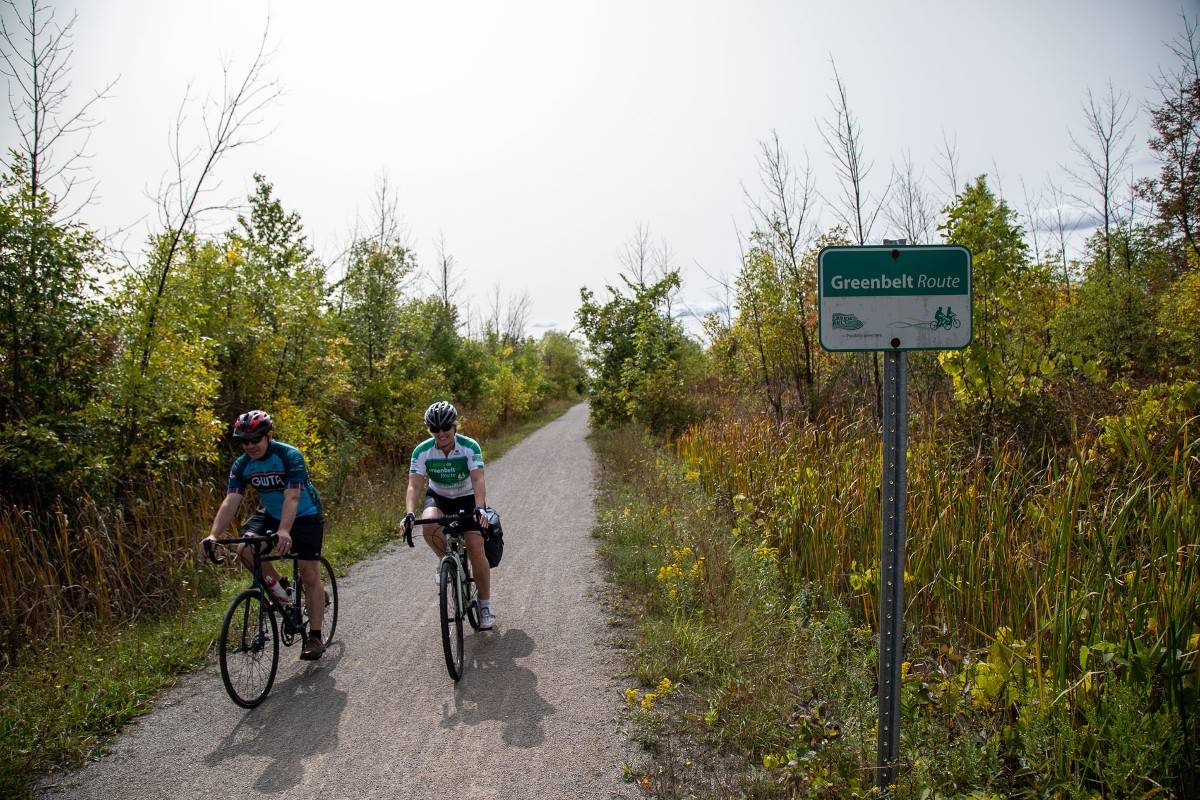 For many in southern Ontario, the Greenbelt is a beloved place to go hiking, biking, and exploring just outside the city.
Martin Lortz

“On the contrary, research has shown that constructing more highways increases traffic and attracts sprawl and this is called induced demand,” he said.

Organizations like Environmental Defence are now lobbying to amend parts of the Greenbelt Act, which allows new infrastructures within protected spaces if it serves the significant growth and economic development expected in southern Ontario.

“The Act should prohibit construction of mega projects like Highway 413. The Greenbelt is a zone to protect green spaces,” added Brooks.

The Green Party of Ontario has committed to address this loophole in the Greenbelt Act. Elyse Robinson, the Green candidate for Barrie-Springwater said, if elected, the party will amend the Act to make new highways through the Greenbelt illegal.

“We have been consistent and clear that we are opposed to any new highways in southern Ontario,” she said.

In addition to the Green Party, the two other opposition parties, the Ontario Liberals and the NDP have denounced the plan to build Highway 413 and Bradford Bypass.

“Highway 413 makes no sense. It’s $10 billion of taxpayers’ money that’s going to be spent recklessly if Doug Ford and his team are allowed to have their way,” he said.

“I am the person who several years ago saw that this [Highway 413] was a mistake, a colossal mistake. I stopped it then but Doug Ford and his team have now brought it back for all the wrong reasons,” he said.

NDP leader Andrea Horwath connected the highway plans to the housing crisis, and accused Ford of working to appease his “developer buddies,” rather than address the needs of struggling people in Ontario.

“Building highway 413 is the wrong thing to do,” she said. “It paves over farmland, it paves over the Greenbelt, it takes chunks out of the Holland Marsh. What we don’t need is more massive highways to mansions that nobody can afford.”

In a rare moment addressing the issue, PC leader Ford stood firm in his stance, maintaining that the proposed highway projects will save considerable time and money for the commuters and the economy.

“Getting stuck in traffic is costing us billions of dollars. We have two-and-a-half million people coming to Ontario over the next few years and we need proper road infrastructure to help people get from one place to another, to make sure goods are flowing,” said Ford, who has kept a low profile for most of the campaign, not releasing his daily campaign schedule and refusing to answer reporter questions.

Much like their collective stance on scrapping the highway projects, there aren’t many dramatic differences among the climate and environment commitments from the three opposition parties.

Both NDP and Liberals agree on reducing greenhouse gas emissions by 50 per cent from 2005 levels by 2030, with the Greens ambitiously setting its target to 60 per cent.

When Ford took office in June of 2018, his party had pledged to reduce emissions by 30 per cent below 2005 levels. While the PC’s forecast report claims to be in the right trajectory to meeting its set target, environmental reports say otherwise. The Ministry of the Environment's internal estimates from 2019 states that “existing policies'' could only help the province achieve less than 20 per cent of its proposed target.

“Ontario is clearly not in line to meeting its emissions target, particularly because the Ford government has already canceled several programs that could have helped achieve those goals,” said Brooks.

The Ford government has canceled over 700 renewable energy projects and terminated a number of electricity conservation programs.

“There are a lot of things at stake in this election apart from Highways, and reducing emissions is one of them,” he said. “The environmental community has been demanding the government reduce emission levels by 60 per cent for a long time.”

While The Green’s emissions target seems to be cohesive with Brooks’ expectation, he is wary of the party’s over reliance on carbon pricing.

“The Greens are heavily relying on carbon pricing, and so far, they haven’t really specified how they will manage such pricing for industrial facilities,” he said.

Likewise, climate experts are skeptical of the NDP’s plan to bring back the cap-and-trade — a system dismantled by Ford.

The two highway projects proposed by the PCs equate to 787 thousand tonnes of greenhouse gas each year, the exact opposite of what climate scientists are telling governments to do..
Simcoe Country Greenbelt Coalition, Environmental Defence, Rescue Lake Simcoe Coalition, Ontario Nature, Wilderness Committee

Mark Jaccard, professor of sustainable energy in the School of Resource and Environmental Management at Simon Fraser University, uses a model called “gTech” to estimate the feasibility of emissions targets set out by the political parties.

“The NDP’s and Liberal’s 50 per cent target represent an ambitious energy transformation in just eight years or less. The aggressive emission target can result in a significant reduction of industrial output and employment,” he said.

Echoing Jaccard, Brooks says that switching back-and-forth between such pricing models can be disastrous for the economy.

“In just a few years, Ontario has switched from Output-Based Pricing System, to Emissions Performance Standard, and then again switching to cap-and-trade, severely impacting industries. It would also create uncertainty in the economy,” he said.

Ford is “actively hostile to climate jobs of the future”

While political parties don't always see eye to eye, all four major parties in Ontario are in support of some form of policy supporting electric vehicles.

This is somewhat ironic considering that one of Ford’s first orders of business, when he assumed power in 2018, was to get rid of the incentives to purchase EVs by scrapping an existing buyer incentive program, which provided up to $14,000 on the purchase of an electric vehicle. The PCs also removed charging station requirements from Ontario’s building code and ripped out public electric vehicle charging stations.

Schreiner called out Ford’s hypocrisy on this issue, saying the PCs are “actively hostile” to the jobs of the future.

“The bottom line is climate action is job action,” Schreiner said. “Renewable energy, he cancelled all the contracts. That’s where most of the energy investment is going globally. When it comes to retrofitting our homes, he cancelled all the programs. When it comes to supporting local food, he wants to pave over local farmland that can actually grow that local food.”

The PCs have also trumpeted plans for a $1 billion “road to the Ring of Fire,” a potential “resource/mineral powerhouse” for building EVs.

Both the NDP and Liberal pledge to provide attractive incentives to encourage people into purchasing EVs, with the former giving out up to $10,000 for zero-emission vehicles and $600 to install charging stations.

The Greens' EV plan is similar in that they offer rebates of up to $10,000 but have also set out targets to dole out $1,000 for e-bikes and used electric cars.

“The parties have a consistent agenda when it comes to EVs. They are certainly an important part of the mix to address the climate crisis,” said Brooks.

“It’s encouraging to see the parties giving out incentives. As we have observed, when the current government canceled incentives, electric vehicle sales took a massive hit.”

However, environmentalists don’t necessarily consider electric vehicles as the answer to addressing greenhouse emissions in Ontario.

Erin Andrews, Executive Director at Impact Zero, is more interested in improving and investing in public transit, rather than EVs.

“A shift to batteries will not entirely eliminate carbon emission. While EVs on the road have a net-negative impact on carbon emissions, their production is carbon intensive,” she said.

Experts like Andrews see investment in electric public transit as a far better way to address both congestion and greenhouse gas emissions in Ontario.