Canadians drive the most carbon-spewing vehicles in the world

As Canada’s emissions continue to rise, politicians are pinning their hopes on Canadians switching to electric cars as a key part of the solution. But environmentalists and industry experts caution that the government needs to do much more to incentivize their widespread adoption.

Promises to get more EVs built and on the road are a key part of the federal government’s climate platform. In the spring, Prime Minister Justin Trudeau was out singing the praises of electric vehicles and promising that a $5,000 federal rebate program for those who purchase EVs would be extended.

Despite his past resistance to initiatives promoting EV usage, Ford pledged to get more “cars of the future” on the road — a move that contradicted his 2018 decision to scrap an EV rebate program that had existed under the previous premier Kathleen Wynne.

The grinning press events reflect growing excitement around electric vehicles as a way to lower pollution and respond to the climate crisis, add new life, and new profits, to the auto industry, and — of course — bring new mining development and extraction projects to Northern Ontario’s so-called Ring of Fire.

Environmentalists and industry watchers tell Ricochet that Canada has the potential to make the switch to electric, and that would directly reduce emissions from one of the country’s top pollution sources.

But they also say EVs are not nearly enough. Canada needs a massive reduction in overall emissions. That means building more public transit, cycling infrastructure, and electrifying of other forms of transportation. 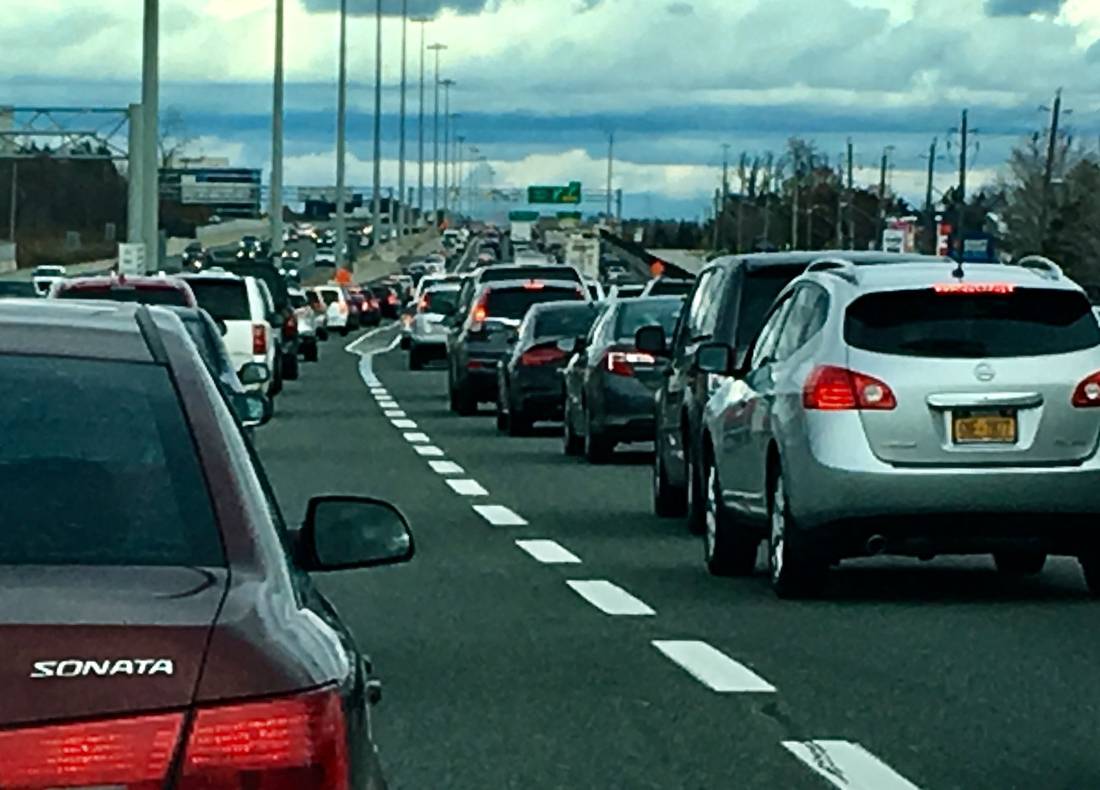 Canada is one of the top 10 emitters of GHGs in the world. In Ontario, traffic is the greatest source of emissions.
Canadian Health Association for Sustainability & Equity

And Canada will have to pick up its pace dramatically to meet its targets and climate commitments.

The country is behind on adding public electric vehicle charging stations. Ford scrapped a number of EV incentives when first elected in 2018, including ripping out a couple dozen public charging stations that had already been installed. The government also deleted EV charging station requirements in Ontario’s building code.

Experts say there’s not enough incentives being offered to consumers to make the switch, and not enough pressure is being put on the auto industry to change, as it’s still profiting greatly from selling gas-guzzling vehicles.

“I don’t know many people or families who purchase a vehicle that costs more than their annual salary,” said Brian Kingston, CEO of the Canadian Vehicle Manufacturers’ Association during a July 5 webinar to Canada’s EV Society, an advocacy group for owners of the vehicles.

When Canada’s incentive programs are compared to other developed countries it lags far behind, Kingston says. “Compared to the rest of the world, we’re not even in the top 20. That has to be addressed.”

And around the same time, the internal combustion engine was being invented and eventually car manufacturers decided it was the way to go.

In 2006, the film Who Killed The Electric Car revealed how the auto industry and governments, influenced by the oil and gas industry, killed the EV industry.

“Just as General Motors, 40 or 50 years ago, bought up the [streetcar transit systems] and shut them down, the oil companies have opposed the creation of an electric infrastructure,” Joseph J Romm, executive director of the Centre for Energy and Climate Solutions, explained in the film.

In Canada, new registrations of “zero-emission vehicles” hit an important milestone in 2021, with EVs making up 5.2 per cent of new cars registered, a Statistics Canada report states.

In response, the big North American car manufacturers are making significant investments. Ford Motor Company announced plans to invest $50 billion in EVs by 2026 and General Motors has pledged to spend $35 billion on EVs by 2025; although both companies are still manufacturing gas-powered vehicles.

Still, a group of industry organizations are concerned about the slow pace that the government is moving. A report by the Canadian Vehicle Manufacturers Association, the Canadian Automobile Dealers Association, and Global Automakers of Canada is critical of the limited incentives provided to would-be EV purchasers by federal and provincial governments.

Car manufacturers are sending the bulk of their EVs to Quebec and B.C., where rebates are available and demand is high. That means consumers in places like Ontario are subjected to long waiting lists, the report says.

The groups behind the report are equally concerned about a lack of public charging stations which, not surprisingly, is significant in provinces that lack incentive programs. Canada needs more than 1.6 million stations, with Ontario shouldering the bulk of the problem, as it’s just over 600,000 short, the report says.

On the rollout of charging stations nation-wide, Kingston said, “we need a plan. Right now. I’m not seeing one and that concerns me.”

Canada -which has missed every emissions reduction target it has ever set -releases $7.3b climate roadmap

Environmental Defence, a Canadian advocacy group, made a bold statement in last year’s report titled Car Wars: SUVs versus EVs and the Battle for a Cleaner Future. It says the auto industry can’t be trusted to bring about change, because it still heavily builds, promotes and sells environmentally damaging vehicles.

“Canadians are driving larger and larger vehicles – so much so that four of every five passenger vehicles sold in Canada today are SUVs and other light trucks – and only 1.6 per cent of those are electric,” the group said in a media release to announce the report.

“And Canadians now drive the most carbon-spewing vehicles in the world. Over the last decade, the rise of SUVs and pickups in Canada added about 18 million additional tonnes of carbon emissions.”

Environmental Defence’s Clean Transportation Project Manager, Nate Wallace, said in an interview that “Canada’s slow rate of EV adoption is not the fault of consumers. It’s the fault of car companies for not making eclectic cars. They make more money making SUVs instead.”

He says Canada needs a nationwide “clean car standard.” By that, he means a policy that not only provides targets for EV adoption, but also penalizes auto manufacturers for failing to meet targets.

“Car companies respond to these policies by shifting their business plans,” he said. “They have a fiduciary duty to their shareholders to make as much money as possible. They say it quite explicitly in annual reports; they say, ‘our margins are in big cars. That’s where we make our money.’”

Another environmental organization that’s watching the industry is concerned about the slow pace, but still optimistic that Canada’s targets can be met.

“We have to [meet our targets] if we want a net-zero economy for 2050, and we can do it,” said Joanna Kyriazis, the clean transportation program manager for Clean Energy Canada.

Looking at global climate goals, including Canada’s commitments in the Paris agreement, EVs are a key piece in mitigation pathways that limit warming to below 2C.

However, it’s important to remember, while no greenhouse gas emissions directly come from EVs, they run on electricity that is, in large part, still produced from fossil fuels in many parts of the world.

Still, Kyriazis believes the federal government is on the right track by rolling out targets and providing incentives, though she admits a lack of charging stations is a problem; particularly in downtown streets or apartment complexes.

She says Canada should work on having a unified approach to bringing in EVs, as the fact that different provinces have different incentive programs right now is a concern.

An EV is still out of reach for most people

Tim Burrows has been driving electric vehicles since 2013, when he purchased a Tesla Model S. He now uses a 2017 Tesla Model X, which he drives around his home community of Carlisle, Ontario and while vacationing in the United States.

He leads the Mississauga chapter of the Electric Vehicle Society and is a board member for the nation-wide group, which arranged for Kingston to speak to its members. 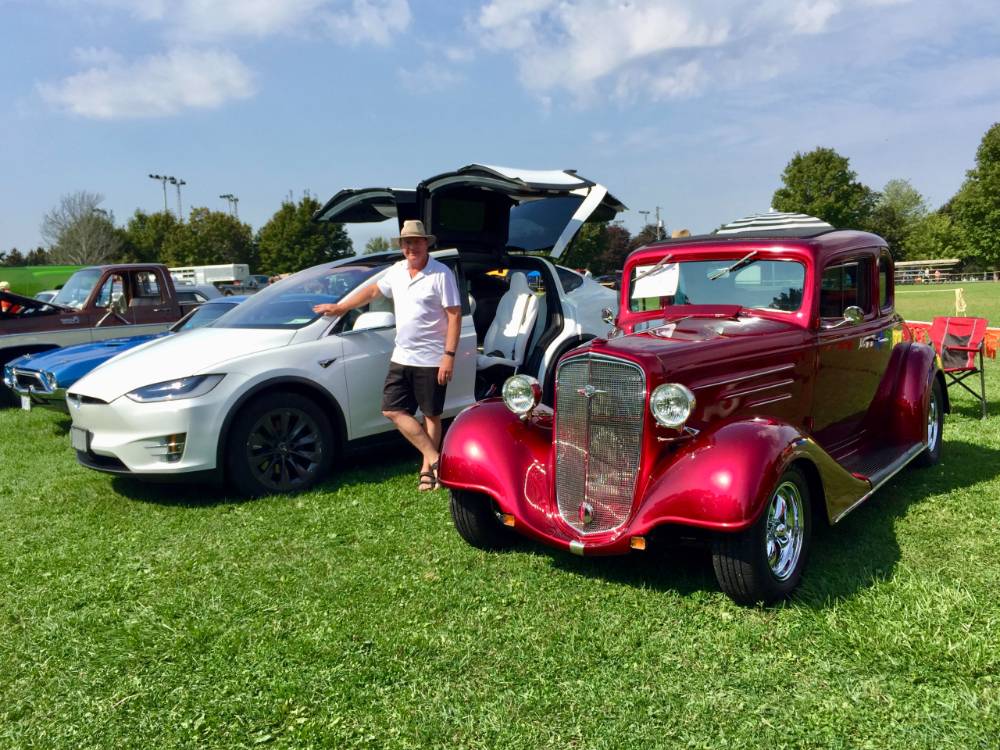 Tim Burrows, a board member for the EV Society of Canada, shows his Tesla electric vehicle at a car show.
Photo submitted by Tim Burrows

Burrows loves EVs so much, he sometimes brings his car to community cruise nights events, where classic car owners show off their vehicles in parking lots. He’s part of an emerging culture of EV enthusiasts – a scan of social media sites shows there’s no shortage of people like Burrows who love showing off and talking about their cars.

“Electric cars were really gaining momentum before we saw these crazy gas prices,” he said. “But the price of gas has brought it to a fever pitch.”

Burrows would like to see more initiatives to educate consumers on electric vehicles. He says many Canadians may think the price for an EV is out of their reach, but he urges them to not dwell on the “sticker price” and focus on the fact that the purchase will save them a lifetime of purchasing gas or paying for oil changes.

He says Canadians need to put more pressure on politicians to embrace EVs and divest from oil and gas companies.

“They have massive shareholders to protect,” he said of the oil and gas industry. “To slow the change is all to the corporations’ benefit.”

Kyriazis was hesitant to put direct blame on oil and gas companies, but pointed out that Canada’s Clean Fuel Standard policy, which requires fuel producers to reduce the carbon intensity of the fuels they sell, was finally approved in June, six years after the idea was initially proposed; a sign that lobbyists who resist clean energy practices still put up a good fight. “I know the oil and gas sector fought hard on that one,” she said.

Oil and gas company executives have spent years pushing disinformation campaigns and lobbying against policies that promote electric vehicles and other climate initiatives.

Wallace’s organization, Environmental Defense, points out that the Canadian Association of Petroleum Producers continues to lobby politicians and influence government policy — despite the fact that the oil and gas industry is a main contributor of the climate crisis. That needs to be a focus.

And the world’s climate scientists agree. Last year, U.N. Secretary-General António Guterres described the latest Intergovernmental Panel on Climate Change report as a "code red for humanity." He said, "the alarm bells are deafening. This report must sound a death knell for coal and fossil fuels, before they destroy our planet."

That’s why Kyriazis, Wallace and Burrows all agree electric vehicles are here to stay; the only question is how quickly – and to what degree of urgency – the transition will be made.

“Electric vehicle adoption will happen regardless,” said Burrows. “This is really a clear path forward and it’s going to happen on its own. But now we have this climate crisis; we need to speed it up because there are consequences if we don’t.”