Millions are spent on policing racialized neighbourhoods, like Toronto’s Jane and Finch, rather than investing in housing or food programs

After seeing flyers posted around his community, Sam Tecle began sounding the alarm about proposed CCTV surveillance and launched an online petition to “halt all plans to install CCTV cameras in Jane and Finch or any other Black and racialized community in Toronto.”

“This will result in more racist policing, more racial profiling, and the increased harassment of our Black youth,” the community activist and academic states in the petition.

In 2020, the Toronto Police Service proposed $8 million to install more CCTV cameras in detention centres, prisons, and public spaces, with a contract awarded to Paladin Technologies, the security installation arm of Paladin Security. Although no direct consultation initially took place with community leaders, most cameras in public areas were slated for “priority neighbourhoods” like Jane and Finch.

Then this past June, Chief James Ramer offered an apology to Black, Indigenous, and other racialized groups in conjunction with the release of the damning findings of a report looking at the disproportionate use of force against, and strip searches of, members of these groups in 2020.

“As an organization, we have not done enough to ensure that every person in our city receives fair and unbiased policing. As chief of police and on behalf of the police, I am sorry and apologize unreservedly,” Ramer said.

In attendance at the press conference were members of Black community organizations, one of whom, University of Toronto professor of Women, Gender and Sexuality Studies, and No Pride in Policing activist, Beverly Bain, derided the apology.

The main complaint of activists and community members within priority neighbourhoods has been that this latest report is just another in a long line of race-based data repeating what these communities have already been expressing for decades.

Considering the report’s conclusion about disproportionate aggression against Black and Indigenous populations by the Toronto Police, what does it mean to live in a community singled out for CCTV surveillance by the force? Where are these cameras located, and who is being watched? How can police perpetrate abuses against certain communities and be trusted with the surveillance of those same communities? How could the millions of dollars allocated to the installation of cameras over three years be put to better use in the communities targeted?

“Nobody asked for an apology, and it’s actually insulting because we’ve been telling you we want you to stop this behaviour for years,” bristles Tecle, who is a member of Jane Finch Action Against Poverty, and a director at youth organization Success Beyond Limits. “I’ve been involved in work to push police surveillance out of my community and all communities.”

After being called out for their lack of transparency, Toronto police finally held a citywide consultation but by that time the damage had already been done.

“Consultation is just PR for white supremacy,” insists Tecle. “What professor Beverly Bain did to interrupt that apology was maybe more effective than any consultation we’ve ever gone to.”

Sam Tecle, a community activist with the Jane Finch Action Against Poverty, and Success Beyond Limits, launched an online petition to “halt all plans to install CCTV cameras in Jane and Finch or any other Black and racialized community in Toronto.”

Constantine Gidaris, an instructor at the University of Toronto’s Scarborough campus, whose research focuses mainly on surveillance and techno-capitalism, points out that, going back centuries, policing is an institution that has always been rooted in the targeting and surveillance of certain racialized groups.

“In the U.S., we know the first federal police agency that emerged was created to capture and return escaped enslaved people to plantation owners,” he says, “while in Canada, one of the first acts of mass surveillance occurred while Canada was building the Canadian Pacific Railway,” when the North-West Mounted Police were deployed to get rid of any Indigenous people who stood their ground and protested the encroachment on their land.

While the technology may have changed, Gidaris says, the underlying ideology hasn’t.

“This has allowed the police to continue this very targeted surveillance while trying to distance themselves from it by presuming some kind of neutrality — ‘It’s not us, it’s the police dashboard camera, or the body camera, or the CCTV camera’ — they try to remove the inherent, ingrained racial bias that is built into the very culture of policing.” 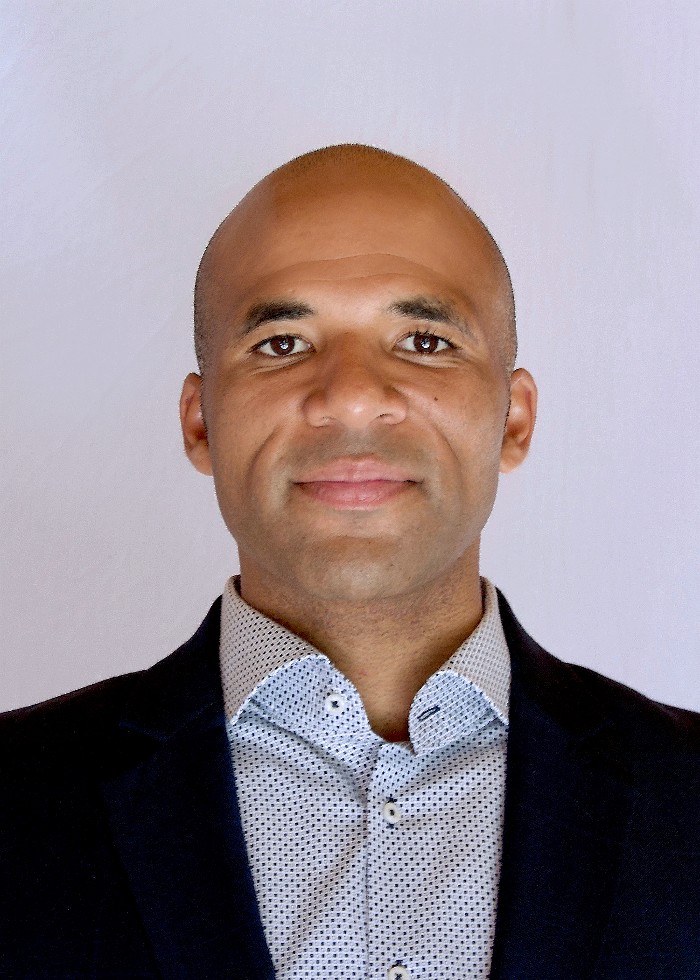 In an interview, Akwasi Owusu-Bempah, a sociology professor at the University of Toronto and special advisor to the Canadian Civil Liberties Association, points to a 2019 Carleton University study that found that when it came to minor offences, police were more likely to lay charges against Black youth than simply give them a warning or put them into a diversion program. However, they were also more likely to have the charges withdrawn or be acquitted.

“If CCTV cameras are being used to identify suspects in serious criminal incidents, it’s a justifiable reason for having them,” Owusu-Bempah adds. “But in the course of investigating a violent incident, what else might be captured on the footage, to what extent are people being surveilled that wouldn’t otherwise be surveilled, and what else might come to the attention of the police that might not otherwise and still is pursued?”

Gidaris draws attention to a 1999 study in the U.K. that found that CCTV operators in control rooms were systematically and disproportionately targeting Black youth for no other apparent reason than they were Black.

But even when it comes to more serious crimes, he says, “multiple studies have pointed out repeatedly that technology has never deterred crime in any significant way.”

“All this means is that the more that you look for a specific crime within a specific group, you’ll eventually find it,” Gidaris said.

“When we’re talking about the real poverty experienced by people who are the most vulnerable to police presence — people who line up on the first or fifteenth of every month at a payday loan office to juggle the bills — just give those people money so they can live with dignity.”

In a statement, Toronto police say that their cameras “are located in public areas which cover traffic and pedestrian movements, and were largely established in response to community public safety concerns during a period of increased gun and gang activity. Residents and businesses expressed that increased safety measures were needed to help them live, work, and enjoy their neighbourhoods.”

“We have listened to communities, analyzed crime rates in specific areas, and focused on major crime indicators such as firearm-related incidents to establish where to put cameras,” police state, emphasizing that “there is a notification process with relevant community stakeholders, such as businesses, which the cameras may cover.”

Tecle says surveillance is not what community members have been asking for.

“What policymakers from the city say is people in our communities are asking for more police,” Tecle says. “What people are also asking for is fully serviced community centres, adequate housing, livable work wages, and anti-poverty measures. To ask for safety means asking to live in our communities to our fullest expression, and then let’s see how much violence there is.” 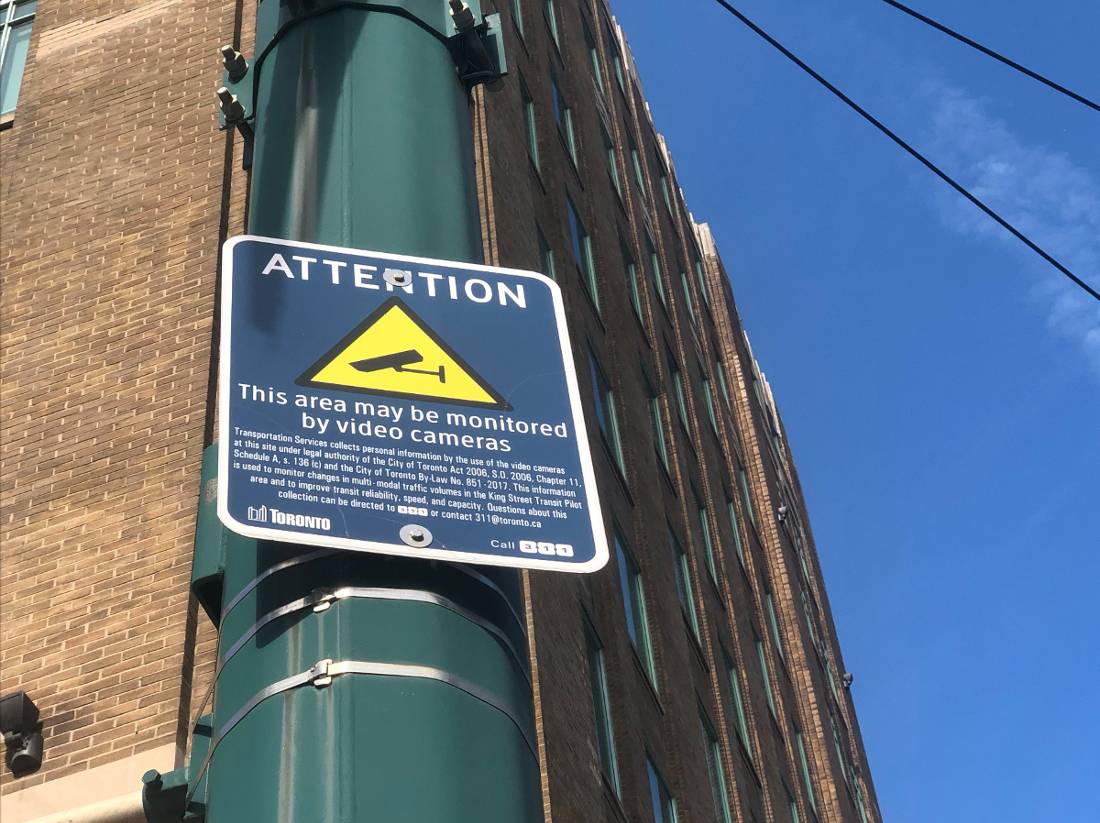 CCTV cameras can be found in major intersections all around Toronto. Many organizations and advocates are speaking out about plans to expand video surveillance by police, which is often used disproportionately in communities that are Black, Indigenous, or racialized or marginalized.
Andrea Houston

The police budget for CCTV cameras, which lumps together surveillance in priority neighbourhoods with cameras in prisons and detention centres, was $8 million.

At a time when Toronto Community Housing is falling on the heads of its residents, and as the city comes up with $100 million for five World Cup matches, how do more cops and cameras align with Chief Ramer’s ardent promises to do better?

“They could have spent that money with food justice organizations, on housing assistance, transportation subsidies like monthly Presto cards and grocery gift cards,” says Tecle.

In 2020, the civilian board overseeing the Toronto police approved 81 recommendations on policing reform. One of those concerned the identification of funding “currently allocated to policing that can potentially be re-allocated to support alternative community safety models and/or fund other City of Toronto programming and services that contribute to community safety.”

In challenging the money spent on cameras, Tecle proposes an idea that might be considered radical: just giving financial assistance to people in the communities.

Constantine Gidaris, an instructor at the University of Toronto’s Scarborough campus

“When we’re talking about the real poverty experienced by people who are the most vulnerable to police presence — people who line up on the first or fifteenth of every month at a payday loan office to juggle the bills — just give those people money so they can live with dignity.”

In 2014, the City of Toronto launched a “youth equity strategy,” which identified 28 key issues faced by youth who are most vulnerable to involvement in violence and crime.

“These reports talk about systemic racism and structural problems around poverty, and access to food, adequate housing, and healthcare,” says Tecle. “Then we got the police in our schools for the next 10 years, then the guns and gangs unit, and now CCTV.”

So who are the “relevant community stakeholders” demanding surveillance in Jane and Finch?

In a chapter he contributed to community worker Wanda MacNevin’s book By Us! For Us! Activism in Jane-Finch, A Working Class Community, Tecle describes walking through the community and noticing changes.

“There’s a condo in development at Yorkwoods starting at $500,000,” Tecle recounts. “The housing at Shoreham north of Finch is dilapidated after years of structural neglect, and all the mom and pop businesses the community loves are gone. We are fully aware of it and don’t know how to fight it yet because we’ve been facing crisis after crisis in this community — but you have to ask what all this development costs and who it’s for.” 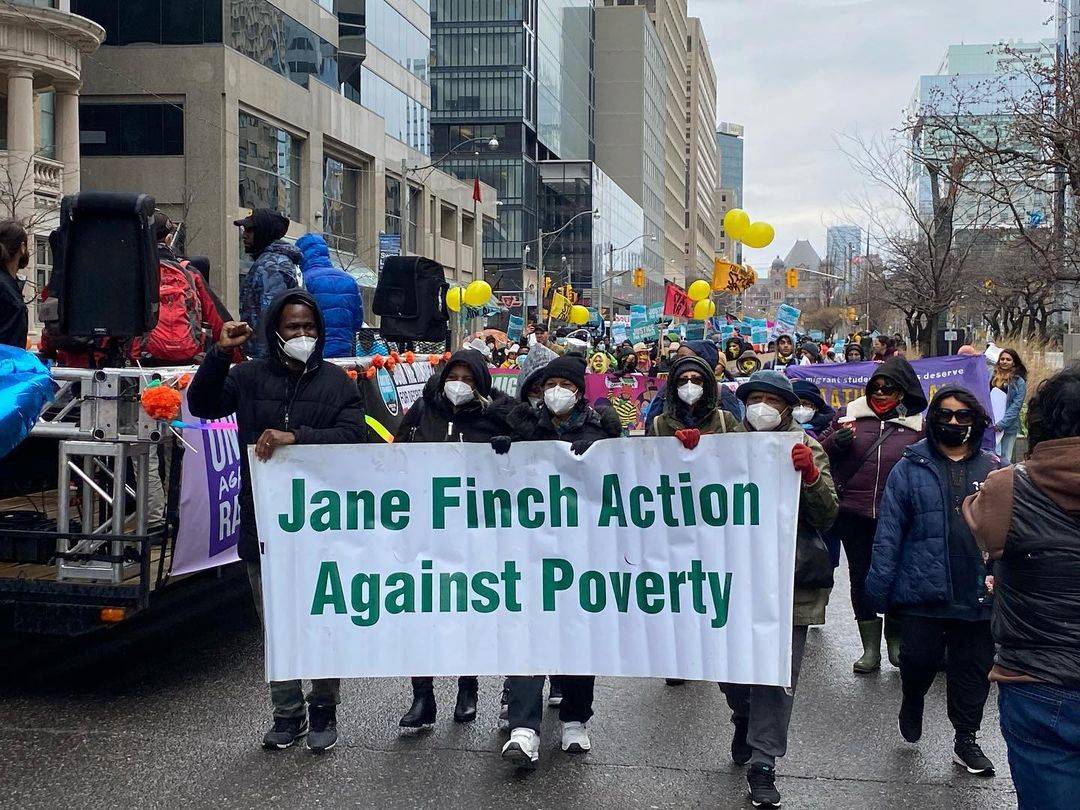 Jane Finch Action Against Poverty is one community group that has been pushing back on the increasing police surveillance in the community.
JFAAP

Gidaris believes that the gentrification speaks to a larger issue of seeing the current residents of the area as expendable. “They don’t want to better these communities, they want to get rid of them,” he says, “and it goes beyond policing into government.”

At its core, this is about people in a community who have taken a lot of blows without much help from the government agencies they’ve been told to rely on — and the encroachment of law enforcement that, by its own admission, has failed in its ability to police equitably.

“Police and prisons as solutions to our social problems do not work,” Tecle says, “and the people who are hurt most by this arrangement are racialized, poor and marginalized. For true change to occur, we will have to think radically differently about how we arrange our city, because it’s not just about Black and white or conservative and progressive — it’s about all of us.”