Brandi Morin
September 24, 2022
Director and producer Kat Coiro wades in Wedzin Kwa, the sacred Wet’suwet’en river currently under threat by the Coastal GasLink pipeline. Photo by Brandi Morin
Your ad here
Automated ads help us pay our journalists, servers, and team. Support us by becoming a member today to hide all automated ads:
Become a member
Share this
0 Comments
Share this
0 Comments

When Hollywood filmmaker Kat Coiro was asked by her friend and colleague — actor Mark Ruffalo — to travel to Wet’suwet’en territories in Northern B.C., she says she instinctively knew she had to get there. Although, she felt far removed from the crisis that the Wet’suwet’en hereditary leadership and land defenders are currently facing. She’s used to the comforts of Hollywood, working on film sets directing high-caliber actors such as Jennifer Lopez (Marry Me) and Ruffalo (She-Hulk).

The director and producer said travelling to Wet’suwet’en yintah (territories) on July 17 “felt like a mission,” she said.

“It felt like something that needed to happen (for me). It’s cruel and unusual (what is happening there), and we don't have a whole lot of places like this left on the planet where we can enjoy nature as human beings. And so, it’s worth protecting.”

Coiro had heard about the injunction obtained by Coastal Gaslink against land defenders who’ve periodically blocked the right of way for the liquified natural gas pipeline, which the company is constructing through approximately 190 kilometers of Wet’suwet’en territory. When complete, the 670-kilometer pipeline will cross about 625 streams, creeks, rivers and lakes, many of them alive with fish.

She also knew that the RCMP have conducted three heavily armed raids, spending nearly $20 million to police the area near the Morice Forest Service Road, which runs alongside the sacred Wet’suwet’en Wedzin Kwa (also known as the Morice River) for part of its route, since 2018.

The most recent raid took place in November 2021 at the Coyote resistance camp, about 20 kilometers away from the Gidimt’en Checkpoint, where Coiro and Brammel visited. The Coyote camp blocked the roadway leading to Coastal GasLink’s drill pad site — where the company is now preparing to drill under the river for the remainder of the year.

Yet, Coiro described a “magnetic pull” drawing her in to become an ally to the hereditary chiefs and land defenders.

“I felt very activated to really try to bring this to the forefront — whether or not it’s possible to stop the drill,” she said.

Ruffalo, who is also an environmentalist and human rights activist, has been advocating for the Wet'suwet'en in their fight against Coastal GasLink’s liquified natural gas pipeline project since earlier this year. He said Hereditary Chief Namoks invited him to the territory in an 11th-hour plea to help after Coastal Gaslink announced it would commence drilling a tunnel underneath Wedzin Kwa — an important salmon habitat and clean drinking water resource for the ecosystems, wildlife, and the entire Wet’suwet’en community.

Ruffalo was unable to leave work, so he began searching for someone to attend in his place. He reached out to Coiro who is filming the Spiderwick Chronicles series for Disney+ in Vancouver. 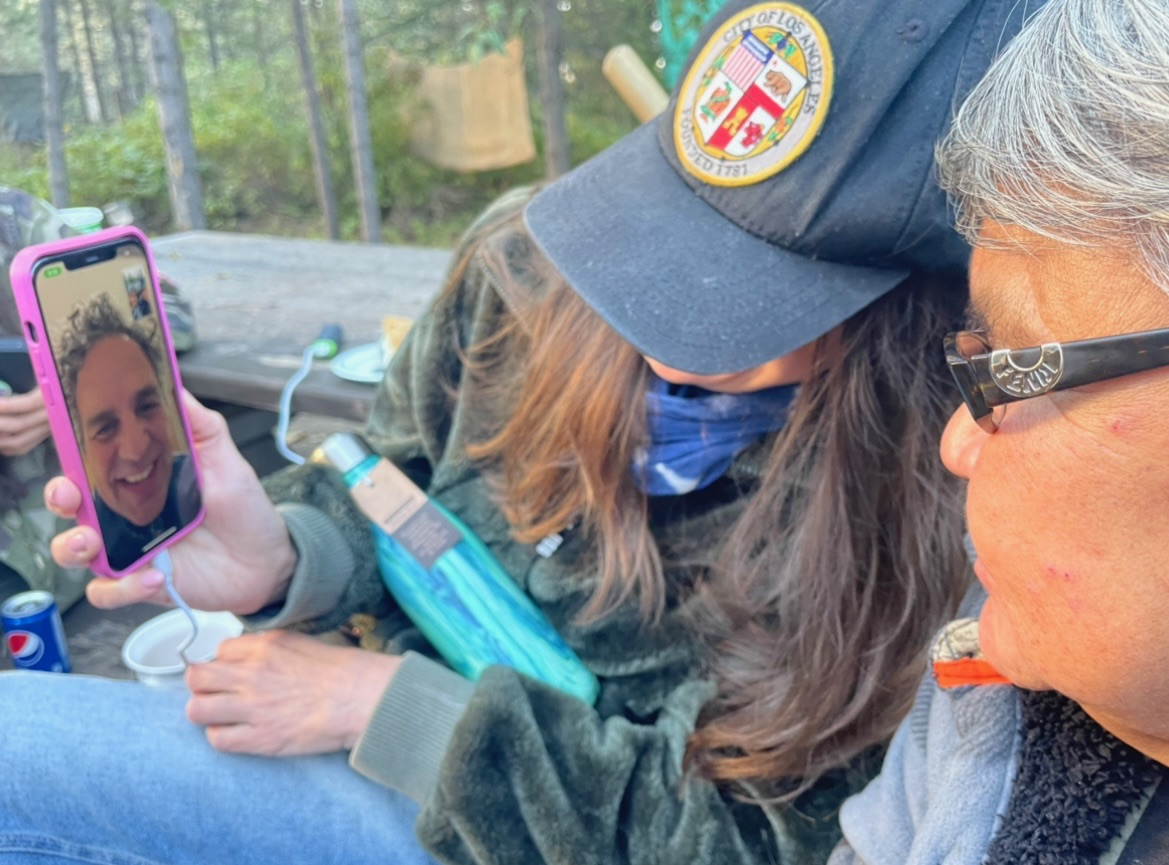 Kat Coiro enjoying a Facetime call with friend and colleague actor Mark Ruffalo from the yintah as Wet’suwet’en elder Janet Williams (AKA Aunty Janet) looks on. Ruffalo has been advocating for the Wet’suwet’en and their battle against the pipeline company, governments, and police since early 2022.
Brandi Morin

“She (Kat) had the commitment, she had the courage to stand up to the fossil fuel industry, and the grit to get all the way out there,” said Ruffalo. “It takes a very special kind of person with a special kind of commitment to be asked and then to actually go. I’m honoured to know her.”

Coiro booked a last-minute plane ticket with her best friend, Abby Brammel, a therapist who specializes in trauma and the vagus nerve, who flew in from southern California to join her. The pair travelled to the former Wet’suwet’en village (now known as Gidimt’en Checkpoint), along the 44-kilometer mark of the Morice River Forest Service Road, about 60 kilometers southwest of Houston, B.C.

At first, Coiro felt nervous about what they’d encounter, given the heavy police presence, armed raids, and violent arrests that the land defenders have been experiencing.

“I also worried about feeling out of place, or feeling like I was coming into another culture, like a tourist almost,” she said.

But the fear melted away when she stepped onto the yintah.

“Oh, it was just the opposite, so — oh my God — welcoming, on a deep, deep level. I felt very protected by a deeper spirit than any of our personal egos or spirit.”

The duo were given a tour of Wet’suwet’en territories by Hereditary Chief Namoks. 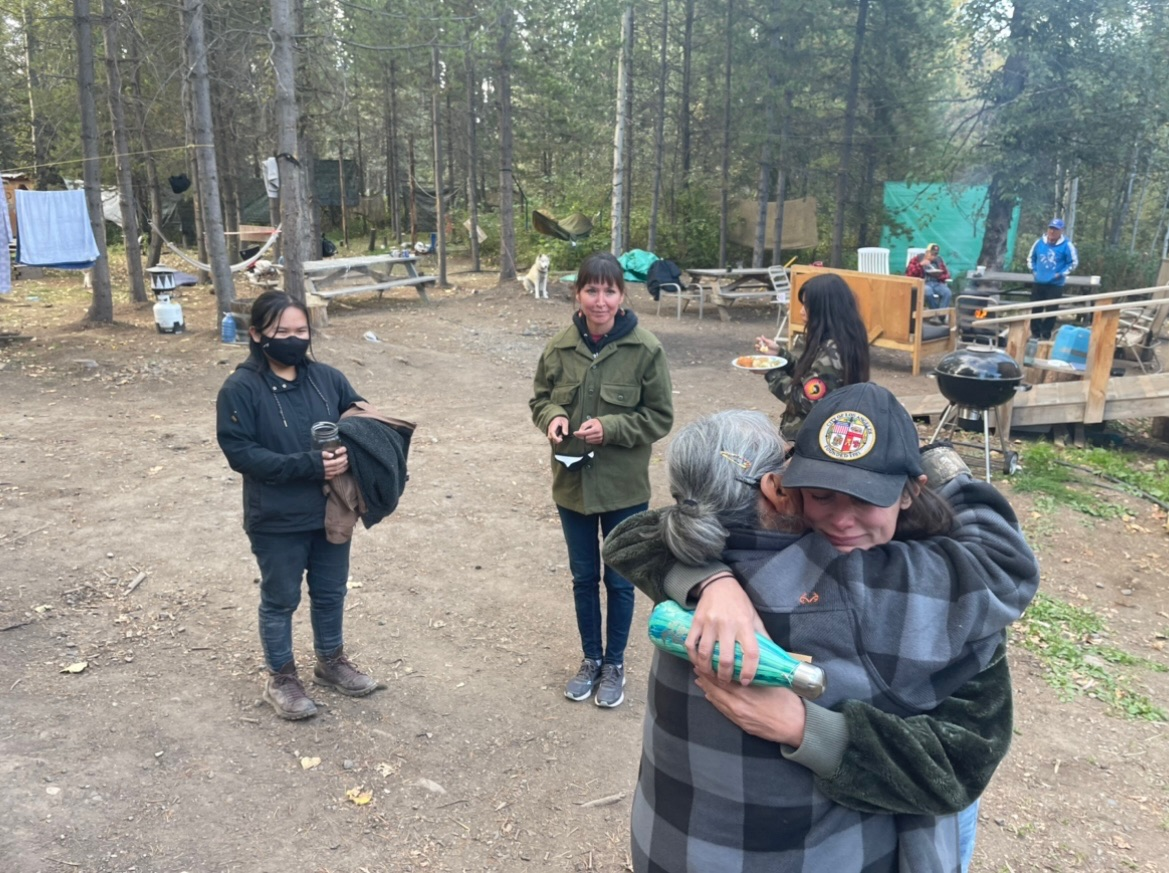 Kat Coiro is embraced by Aunty Janet of the Cas Yahs house, Gidimt’en Clan of the Wet’suwet’en.
Brandi Morin

The yintah — the Wet’suwet’en word for the land — is home to bald eagles, black and grizzly bears, deer, moose, beaver, weasels, martens, porcupines, coyotes, wolves and other critters that scurry across the ground and move through the trees in an inherent orchestra of harmony. The Wet’suwet’en people continue to hunt, trap, harvest freshwater fish, and gather berries, wild turnip and wild rice within this mountain paradise, as their ancestors did before them.

The Wedzin Kwa is clean enough to drink from without prior purification. It’s lined by jagged rocks and colourful forests made up of diverse tree species, including white spruce, black spruce, subalpine fir, lodgepole pine, birch, trembling aspen and black cottonwood. Within these woods and wet meadows is an abundant garden pharmacy of medicines derived from barks, roots and other vegetation.

Coiro said she had an epiphany while taking in the territory.

The two were embraced into a welcoming circle led by hereditary chiefs at Gidimt’en Checkpoint and then shared a meal with the group featuring deer harvested on the territory. Stories, traditional knowledge, protocol and laughter were exchanged.

Coiro was stirred to tears about the interconnectedness she felt, describing the encounter while choked up with emotion. It’s something she and Brammel aren’t often exposed to within western society.

“It was my birthday, and I was devastated not to be with my family and my children, but I went there and I felt like I was part of a universal family that loved me. It was a very profound experience because we are not used to being welcomed and loved in that way — we are not used to it in our culture. It was so natural and organic. It almost felt like this series of miracles, and it was really, really powerful.” 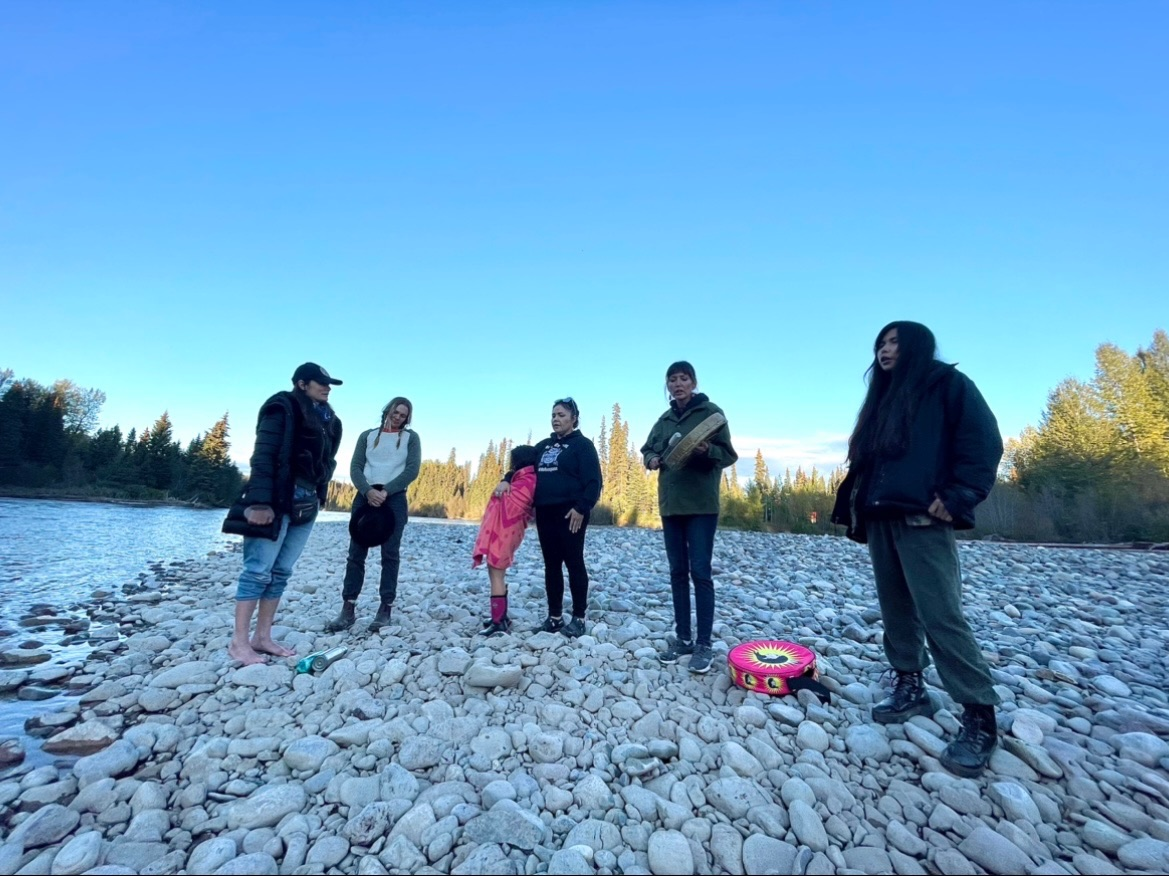 But Coiro and Brammel felt the tense mood from the seriousness of what their Wet’suwet’en hosts are facing. They said it was difficult to comprehend the “psychological torture” that the land defenders have endured from police, Coastal GasLink security surveillance, and the imminent threats to their ancestral homelands.

“It’s an invasion. It’s full-on terrorism that’s funded by the government,” said Coiro, who speaks passionately about the injustices she learned about.

“I could barely withstand the psychological torture of being harassed while you go to look at a beautiful river, I cannot even imagine. And yet they are handling this with grace and humor. It’s really beautiful, but it's also so disturbing because of the desensitization of the way that they are being treated, it's mind-blowing quite frankly.”

Brammel adds, as a therapist who specializes in trauma, she is well-versed in the effects of “psychological terrorism,” and says she is shocked at the treatment of the Wet’suwet’en land defenders.

“We do know now that certain things create certain physiological responses in the body that lead to PTSD. We know the neuroscience behind it, and we know what creates it,” said Brammel.

“And the fact that they're (RCMP) using those tactics, waking people up at night, shining lights in their eyes, threatening voices, using dogs like this. I don't know how you can be a supporter of human rights and not care about this.” 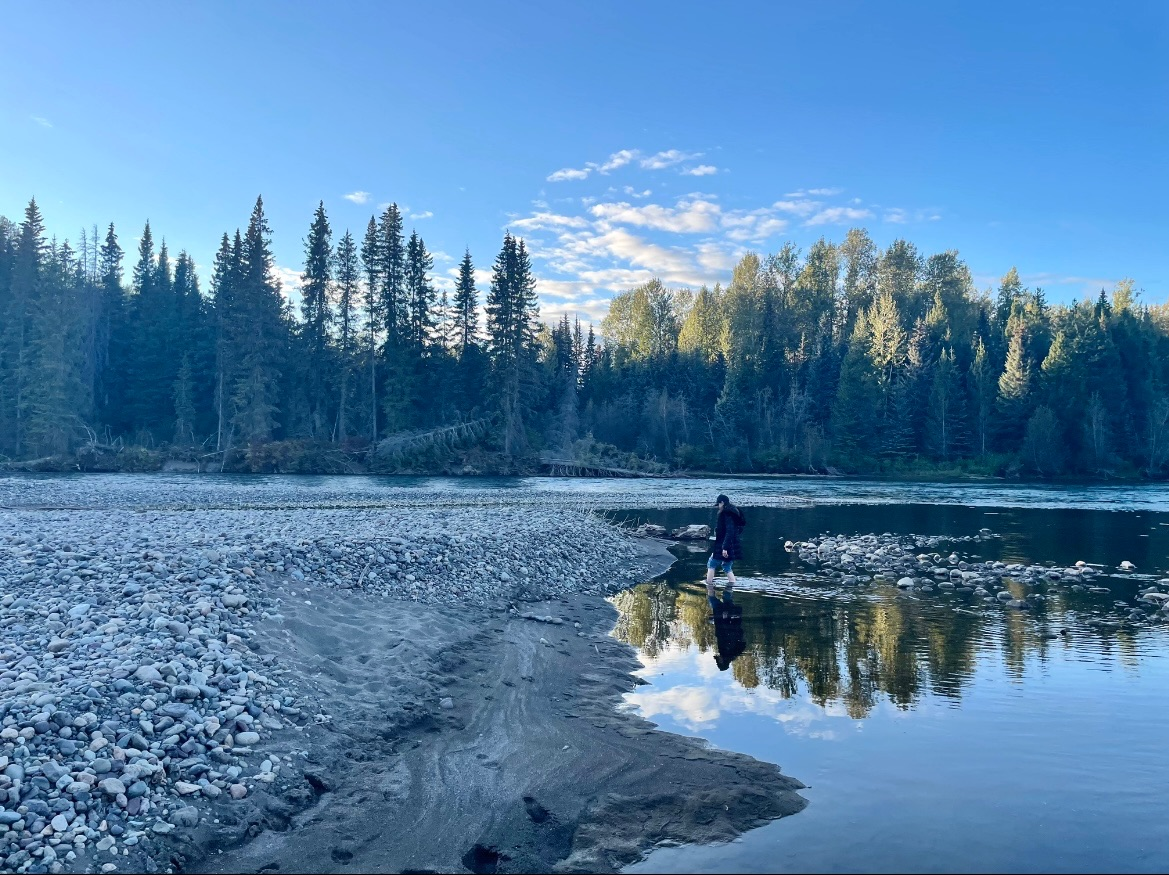 At sunset that evening, while standing on the rocky riverbank, Gidimt’en Clan mother and land defender Molly Wickham, also known as Sleydo’, sang a water song she composed for Wedzin Kwa, along with Gidimt’en Clan member Gaylene Morris and the daughter of Gidimt’en Clan Hereditary Chief Woos, Jocey Alec.

Morris’s daughter and a youth land defender went for a swim in Wedkin Kwa while a few others chatted on the shoreline. Coiro and Brammel rolled up their pants, waded into the river, and drank the clear, rushing water. It was a sacred gift, not everyone can experience, points out Hereditary Chief Namoks.

“Thank you for coming out here. I’m so happy that you’re here,” said Namoks.

“The very way that they portray us; the very fact that you’re here lets the world know the human aspect that is here rather than what is being portrayed by elected officials or the pipeline (company). We are human, we are non-violent, and we always will be. We are here as caretakers of these lands, these waters, these peoples-that is our duty.”

‘The veins of our Mother’

Coiro and Brammel stripped down to their underwear to bathe in the river, immersing themselves, saying, “the river feels like the veins of our Mother, and the blood running through her veins is the same as the water that is running through the land.”

“We are taught, I feel, to really fear nature,” explained Coiro. “You know, to bottle it up, to contain it, to process it. And it’s amazing to overcome the fear.”

Now, Coiro says, she believes she’s discovered a part of her life's purpose, and that is to stand by the Wet’suwet’en land defenders. “The fact that this is going on in a time when we are connected, and we have social media. It needs to be exposed,” said Coiro.

“I see so many people talking about human rights, and the fact that this isn't at the forefront of those conversations, it's a crime,” she said. “I do believe that the story of these people, and the truth of their mission, needs to be out there. Their names need to be cleared. They need to be seen as peaceful protectors, rather than criminals. Their protest is simply to exist and to be there on the land. I really understood that these fights are not just for Indigenous People. These fights are for the human race — and we are at a critical turning point. These are our warriors for the human race.”