What we lose in the heat

Among the things my wife and I will remember about our honeymoon was the intolerable heat.

As we made our way last month through interior British Columbia, temperatures often threatened to breach 40C. We found ourselves avoiding or cutting short some of the things we’d wanted to do — adventures in the mountain forests, evening walks exploring a new town — our bodies too exhausted by the day’s broiling to do anything more than retreat to a hotel room with air conditioning.

Why that’s bothered me so much is something I’ve been trying to figure out.

It wasn’t simply the fact of the heat. There is nothing all that surprising about temperature records being set across the northern hemisphere yet again this summer. Ongoing greenhouse gas emissions mean that more and more records will be broken and then surpassed again as every decade grows warmer than the last. In that sense, there is something strangely mundane about this new heat. Rising temperatures are no more unexpected than the plummet that accompanies stepping off a ledge.

I think what bothered me had to do with the realization that the heat took something from my wife and me that we can’t get back — and that we’re all going through that now.

Maybe that’s something to lean into.

Because, outside of the climate movement, in the mainstream of politics and opinion, it’s hard to get a sense that many people are fully processing what this warming signals for our future. It’s as though this warmth is no different than a heatwave of the kind that occurred in the world before the climate crisis — something random and temporary to be tolerated, something that is not going to get even worse, something we may stop thinking about once it subsides.

But we can’t continue to see the new heat in this way. It is the most immediate and widely shared experience of the breaking down of the only conditions capable of supporting our societies. It’s precisely that significance to the heat — the way it represents the diminishing of the old world, irretrievably, further and further into the distance — that we need ways of recognizing and keeping top of mind.

Being the loss-averse creatures we are, let’s think about what this heat is causing us to lose.

Heat of the moment

We can start with the loss of lives due to the heat itself, though I think it’s clear and tragic enough to most people that I need not elaborate further here.

More susceptible to being overlooked is how culture and tradition rank among the things being lost in the heat.

Inuit writer and activist Sheila Watt-Cloutier refers to a “right to be cold” — that is, to the environmental conditions required for cultural continuance. It is a right that climate change is now eroding.

Inuit writer and activist Sheila Watt-Cloutier talks about the intimate connection between the climate crisis and the impacts on Indigenous Peoples.
Speakers.ca

For generations, Arctic climate provided the conditions Inuit culture had adapted to and in which young hunters would hone skills, behaviours, qualities, and knowledge necessary for adult life, ones they would eventually pass on to the next generation. I recall a talk of Watt-Cloutier’s years ago where she told audience members who were hoping to understand the significance of that loss to imagine that all the post-secondary institutions, the places in which young people are prepared for adulthood, were crumbling away.

What I want to focus on here is another way to notice the losses inflicted by this heat. And though it isn’t as wrenchingly tragic or unjust as those just mentioned, what it offers is a more universal and nagging reminder — one we feel on our skin — that something is amiss.

The theft of small moments

It starts by recalling how we get only so many days to live, and only so many of those in the summers, when we’re called to step out by the warmth and light and greenery of longer days, when our planet’s life is at its most flourishing.

Those days are all too scarce, and this new heat is stopping us from living them fully.

Every heat dome languidly squatting its warmth over a chunk of the country evaporates some of the collective lifeforce there whenever it compels people to forgo anything too active — anything from sports, to hikes, to free play — and to adopt the slow indolence needed to keep body temperatures down. It dries out their pool of options, reducing them to a choice between places offering the relief of air conditioning.

Each summer night that the air around us becomes an over-thick, unlifting blanket and denies us sleep leaves us to drift through the next day in hazy unwakefulness and takes away from how completely we can live it.

Some moments are ruined because of how the swelter melts away our patience and kindness, how the heat stokes, like it does the flowering of mould, the impulse to be curt and surly, even with those we’re supposed to share our happiest times with. 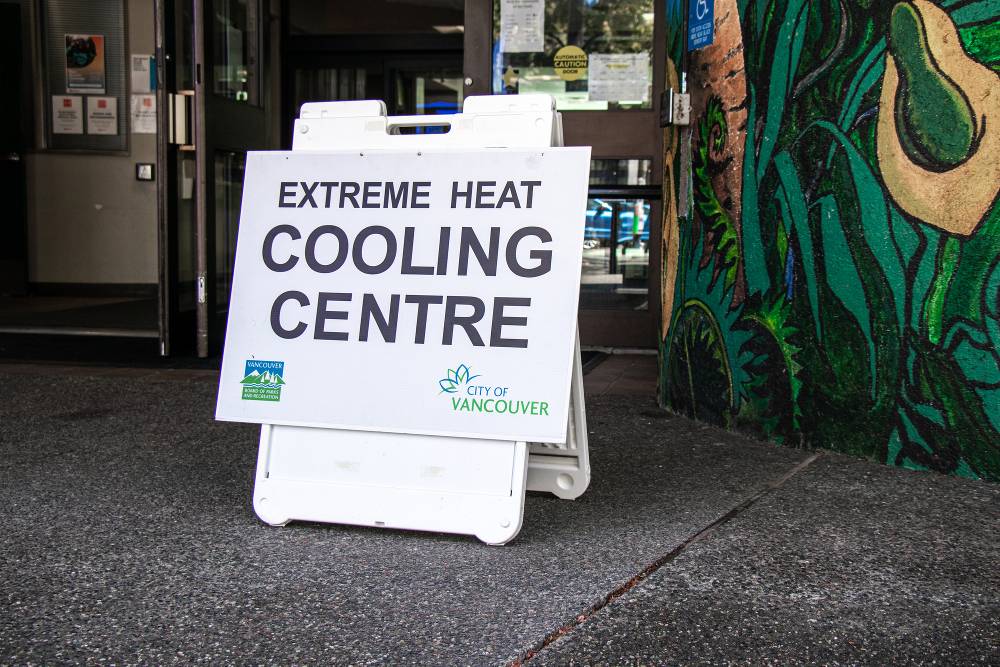 An extreme heat cooling centre in Vancouver, B.C.
Photo by Margarita_Young via Depositphotos

Readers should, before fall sets in and the heat recedes, ask themselves if they experienced losses like these over the summer — moments they lived incompletely, would-be memories they missed out on the chance to make and later cherish — and what it means that the season’s heat only gets worse from here. And when we next inevitably feel the unbearability of it, let’s recognize how it is the same heat driving those still graver losses of life and culture.

Of course, it isn’t enough to see that these things are being taken away. We should remember, too, that there is a set of agents behind the loss, parties to blame and resist.

They are those who together work to cut off routes to a safe, just, and sustainable future — from the fossil fuel industry and its allies intent on blowing past safe climate limits to the mainstream political parties who prevent us from seeing the crisis as a crisis in order to preserve the status quo.

Whether we are talking about lives, traditions, or just small moments, each such loss represents a victory for those forces, a sacrifice successfully extracted from us so that fossil capitalism and neoliberal politics can carry on undisrupted.

And though there is much we won’t get back, there remains much to preserve.