Challenging Canada’s sex work laws: communicating consent should not be a crime

Alex Tigchelaar
October 6, 2022
Monica Forrester is a co-ordinator for Maggie's Toronto Sex Workers Action Project. She joined the many sex workers and their allies rallying at the court this week in support of the landmark Charter challenge.

Canada’s anti-sex work laws are facing a constitutional challenge this week. This is part two of three of Ricochet’s coverage. Read part one here.

“Sex workers know that criminalization and police are a source of harm in our lives. We know that the Charter is meant to apply to us and that we should not be harmed by laws that the government makes. In 2014, Stephen Harper’s government passed the Protection of Communities and Exploited Persons Act (PCEPA), a law that harms sex workers and violates our rights. However, the process of removing harmful laws and having those rights recognized is very complex and tedious… After years of inaction from Parliament to repeal the current sex work offences, sex workers were forced to go to court to challenge these laws.”

At times, to avoid the law, Monica Forrester says she’s been forced to use hand signals and vague communication to discuss terms with her clients. She does this because the current laws around sex work in Canada makes establishing consent a criminal act.

The current laws around communication prevent sex workers like Forrester from establishing consent. This was a central discussion at the landmark constitutional challenge happening this week in Toronto.

Over the past two days, Justice Goldstein heard from the counsel for the applicants and interveners. For the sex workers in the courtroom, these skillful and determined lawyers, affirming their witness reports and lived experiences, was moving. As they spoke, there was nodding, Deaf applause, and a smattering of finger snaps.

During breaks, lawyers and court employees came out of surrounding courtrooms and offices several times to shush the animated spectators, who exploded with excitement into the adjoining hall after being as quiet as they could during the hearing. 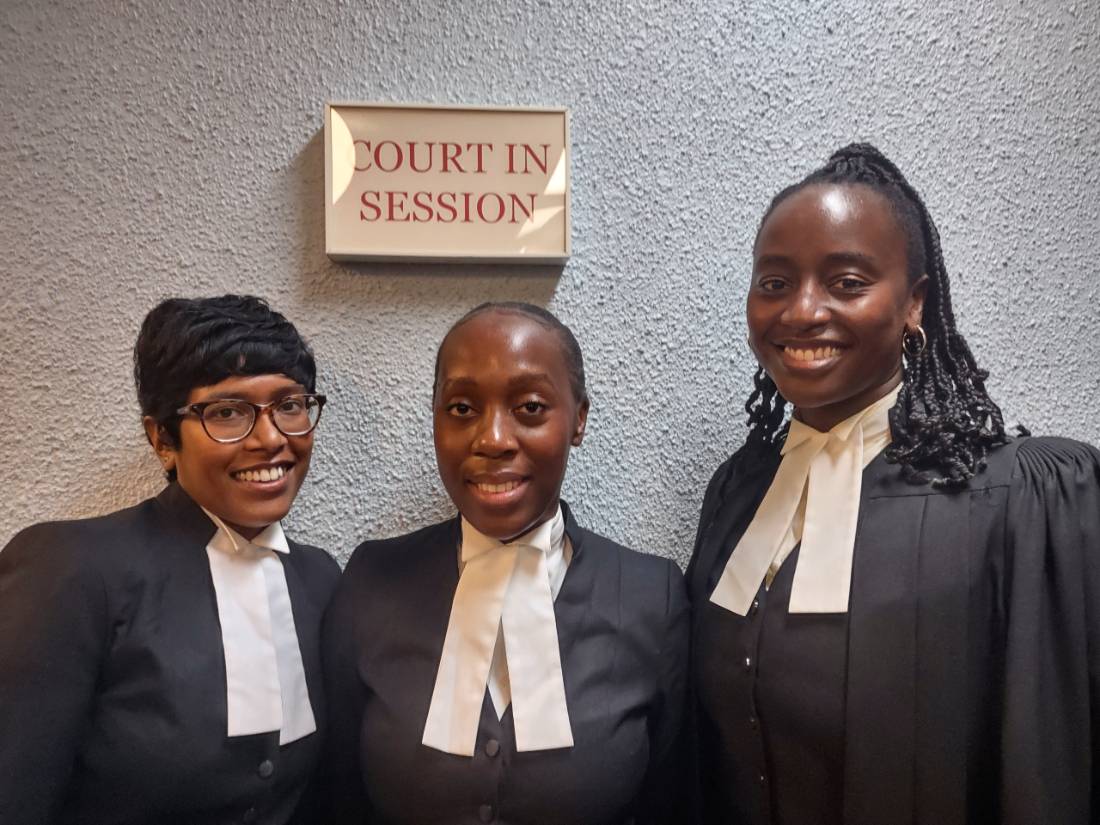 On Tuesday morning, interveners began making their case, laying out strong arguments that the current laws are harmful to all sex workers.

Tara Santini, co-counsel for the applicants, centered her Monday arguments around the right to autonomy, which she explained as both affecting sex workers’ security and liberty — both are protected rights under Section 7 of the Charter.

These arguments highlighted issues of bodily integrity and assault, as well as consent, and the ability to make fundamental decisions, which were referenced multiple times by interveners the next day.

Santini argued that the “current laws undermine bodily integrity, bodily autonomy and consent,” adding that the question of morality is irrelevant “to the question of whether Section 7 is being violated. “Violence prevention needs to be integrated into law and extended to people who sell sex.”

“Decades of sexual assault law has highlighted the need for clear communication in order to set the conditions for sexual exchange and establish consent.

This point was further emphasized by the Ontario Coalition of Rape Crisis Centres — a notable newer ally of sex workers— which argued that one important aspect of consent is the right to engage in advance communications.

“All the conversations people have before engaging in a sexual encounter,” stating that “PCEPA makes advance negotiations impossible,” lawyer Marcus McCann said, which creates an environment where “deliberate misuse of silence and ambiguity” occur. These include prior discussions of condom use.

“Despite making a decision to sell sex, this does not negate the fact that sex workers are deserving of having their human rights respected”

This was the argument made in a recent successful Supreme Court of Canada decision, Kirkpatrick, in which agreed-upon condom use is part of the notion of consent.

Drawing from Forrester’s witness report, McCann argued that hand signals and vague communication are “not a substitute for clear communication in advance of an encounter.” He emphasized that “even if these conversations do happen in a car or a hotel, they are still illegal.”

As Santini argued the previous day, “the provisions impede in practice and prohibit in law the conditions necessary to establish consent. In the context of sex work, communication regarding safer sex, price, and specific boundaries are inseparable from their subjective consent.”

Reminding the court of the wealth of precedent in sexual assault and abortion law, Santini argued, “the right to autonomy is an inviolable right that everyone has regarding someone’s ability to make decisions regarding their bodies, without state interference.

“Agency is particularly important in the context of people making choices with few options: their decisional autonomy is not immediately apparent but a lack of meaningful choice does not negate their right to autonomy.”

On the inviolable right to decide or refuse to consent to sex, the Kirkpatrick case makes the argument that the person’s reason for this decision is irrelevant to the law. Their thoughts, motivations, and desires are private. The applicants argue this includes whether anything is being exchanged as part of the sexual encounter. The fact that consent is taking place in the context of a currently criminalized exchange does not negate its value. 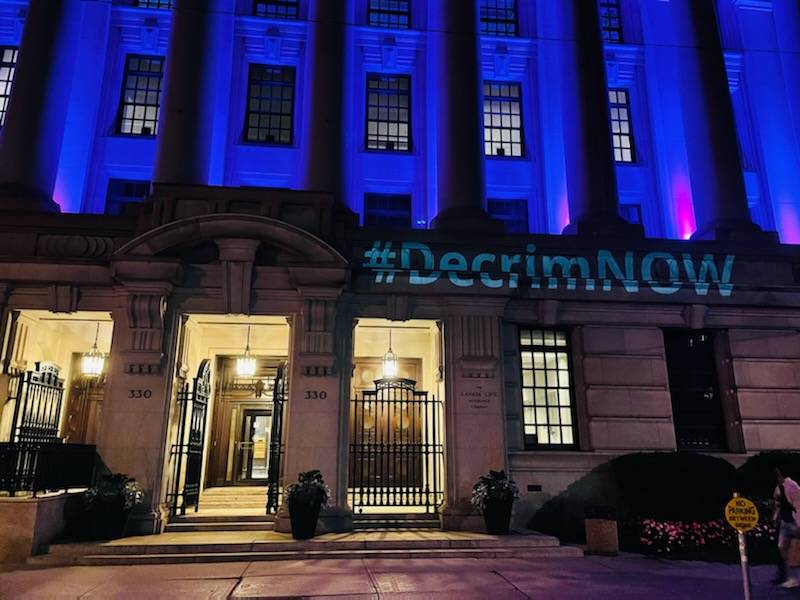 PCEPA laws around advertising and communication were raised by several interveners as a violation of multiple Charter sections.

Sex workers’ advertising strategies are not just a way to attract clients, but are also a way of protecting their health and safety. An advertisement clearly lays out a sex worker’s services, boundaries, and fees. When women are unable to be transparent in their ads, this sets the stage for potential violence.

As McCann said in his conclusion, “one of the great lessons of the anti-violence movement is that secrecy and silence create atmospheres where boundaries are breached.”

For trans women specifically, clear communication in advertising means letting clients know that they are trans. As Adriel Weaver from LGBTQ rights organizations EGALE and Enchanté Network said, drawing from the evidence put forward by the trans women involved in the case, “trans sex workers need clients to understand their bodies and experiences.”

Additionally, referrals in the trans sex working community are imperative to safer working conditions, but workers “risk prosecution under third party provisions” if they provide them. 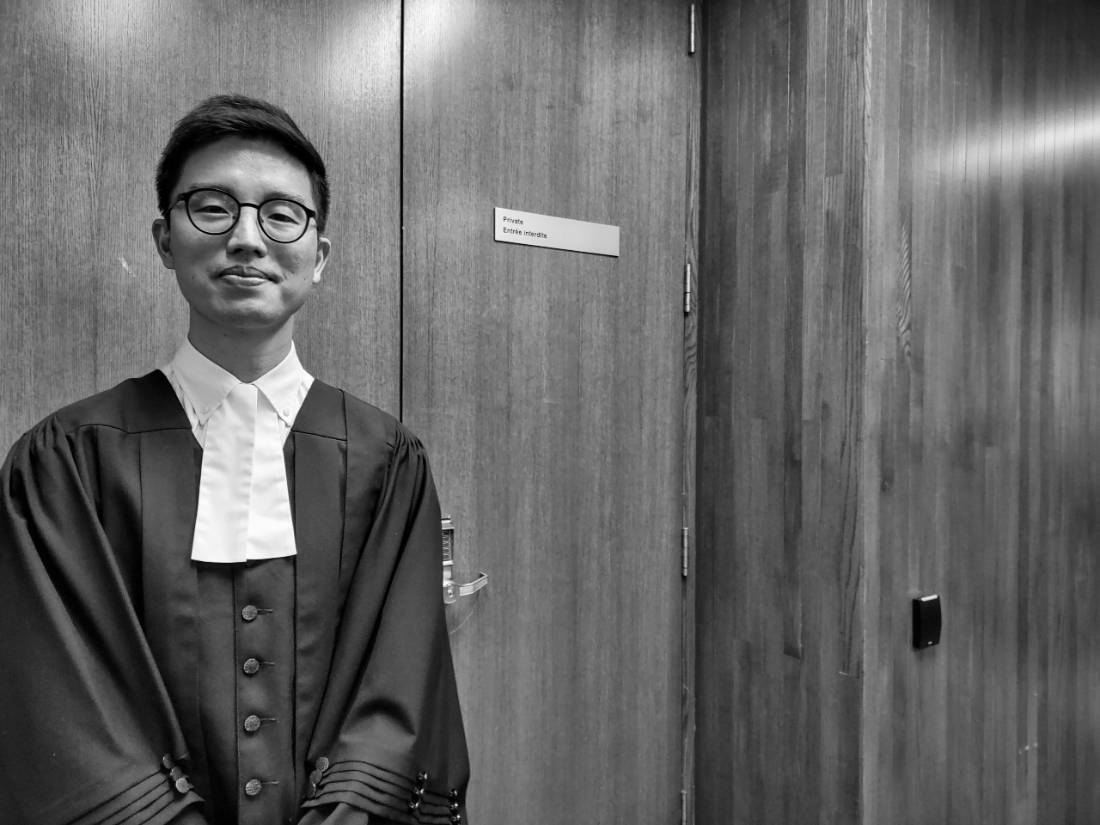 Vincent Wong is from the Migrant Workers Alliance for Change.
Alex Tigchelaar

Nobleman said, “the state should not be interfering with people trying to protect their health.”

Molly Joeck from Canadian Association of Refugee Lawyers laid out the serious impacts that Canada’s sex work laws has on migrant sex workers, including lifetime bans from Canada.

The law has provisions around “organized” sex work activity, capturing “any group of three people” being applied to sex workers who are simply in a mutually supportive arrangement. These arrests don’t even require convictions. The fear around the consequences of these provisions, Joeck said, “is not theoretical.”

Joeck was followed by Vincent Wong from the Migrant Workers Alliance for Change.

Wong brought historical context to the harms Canadian immigration laws have had on Asian women, citing the ban on Chinese sex workers in 1885. This ban suggested that Asian women were naturally inclined to prostitution and therefore affected Asian women more broadly. While Chinese men who suffered the well-known head tax received a formal apology in Parliament, Chinese women, and Asian sex workers specifically, have never been publicly acknowledged for this racial injustice. As Wong argues, this racist policy continues to “bleed into contemporary practice,” where Asian sex workers suffer multiple impediments in their attempts to work safely.

The criminalization of third parties extends to their mutual aid networks, he said, including receptionists and janitors at their massage parlours, as well as family members. 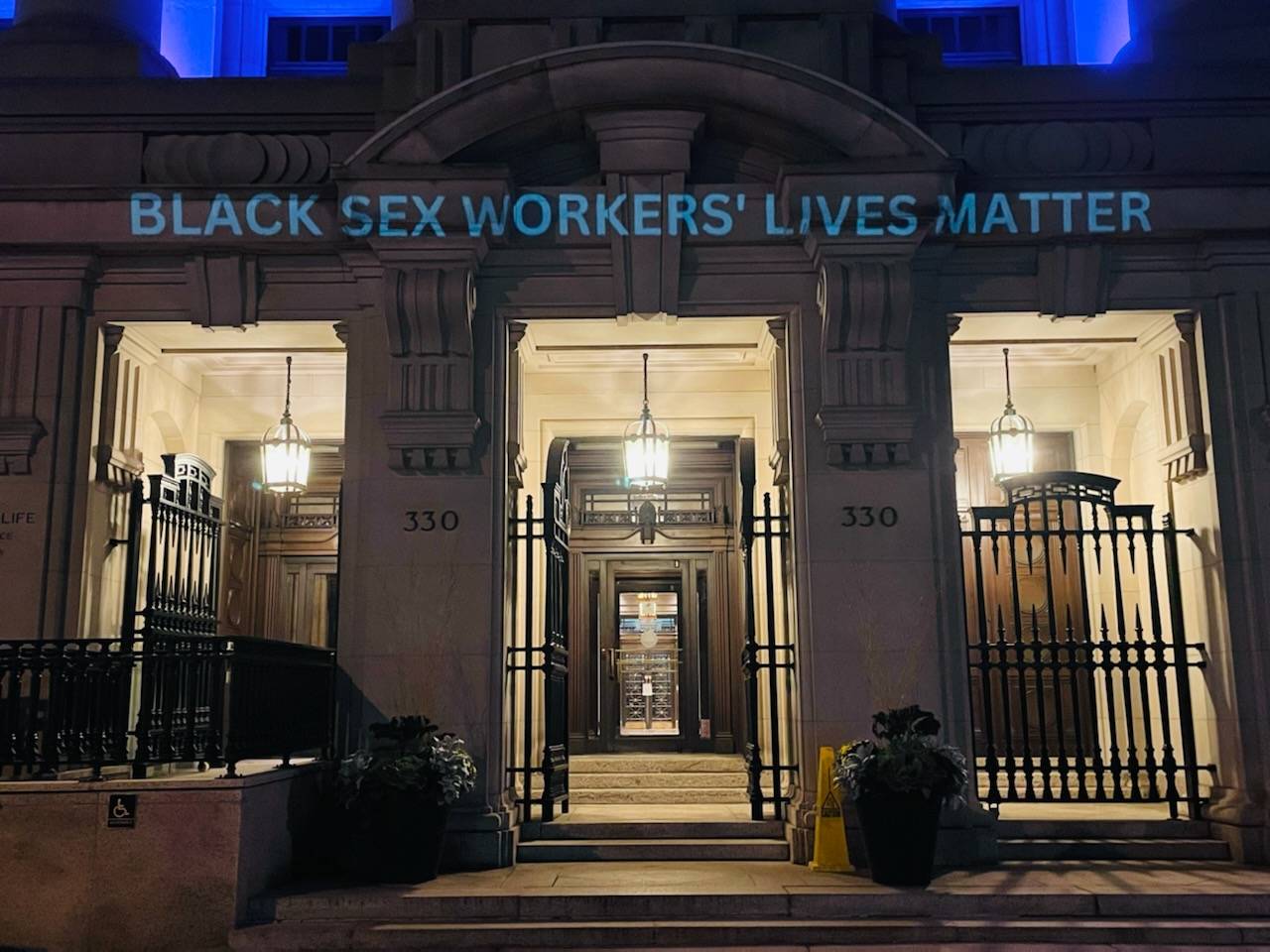 Despite PCEPA’s situating clients as exploitative, Wong said, in reality they are often “crucial resources to Asian sex workers, assisting them in navigating governmental systems, health appointments, and supporting them with housing and shelter. Freedom to enter into these relationships is undermined by PCEPA.”

Wong concluded with some key statistics, taken from research done by Butterfly: The Asian and Migrant Sex Worker Support Network. He said 62 per cent of Asian workers would not report violence, 65 per cent are afraid of raids, 33 per cent would report abuse from law enforcement, including verbal and physical abuse, and 12 per cent would report being sexually assaulted by law enforcement.

She said it is critical for the court “to consider anti-Black racism” when looking at the impugned provisions, which “do not respond to the needs of Black sex workers, and perpetuate ongoing harms from criminal punishment systems.”

Black sex workers “are told by aggressors that police don’t care about them, and they experience evictions for criminality that exacerbate homelessness.”

Black sex workers are also at a higher risk of threats or reports to child services. Moyo, applying Section 15, the fundamental right to equality and non-discrimination, asked the court to consider how “the stereotyping of Black communities and Black sex workers creates a distinction based on race. She urged the judge to remember that Black sex workers’ lives matter — powerful words to hear spoken in a court room. 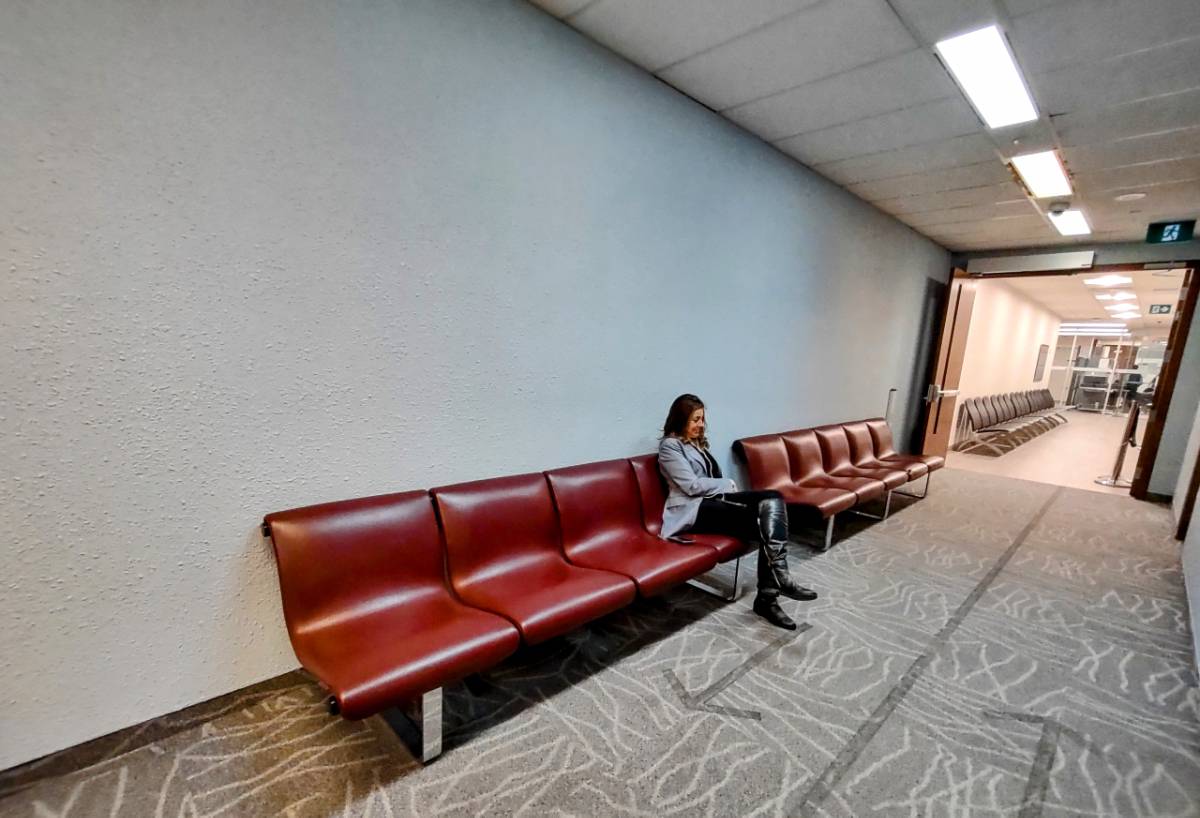 What are the Canadian government’s lawyers arguing?

By contrast, Michael Morris and Joseph Cheng, lawyers for the Canadian government, began their arguments Tuesday afternoon with a description of various basic concepts surrounding previous decisions and political contexts. Cheng argued that because sex work is criminalized, expecting Charter rights to be upheld in this context is unreasonable: “You cannot call something that has been declared illegal work,” he said.

As Sandra Wesley, member of the Canadian Alliance for Sex Work Law Reform (CASWLR) and Executive Director of Stella, l’amie de Maimie said, “they seemed to both emphasize the complete illegality of all sex work — which according to them should mean that sex workers cannot claim Charter protection—and their interpretation of the law as permitting sex workers to hire third parties and use safety enhancing measures.”

“It is not clear how those two ideas can coexist, but what seems clear is that the attorney general of Canada wants the judge to agree that violence against sex workers and other harms are not really a big deal, and, if they are, sex workers should be blamed for it, either because they are choosing to commit crimes or because they are misunderstanding the law.”

Jenn Clamen, national co-ordinator for the CASWLR said, the Crown is creating false divides amongst “vulnerable people” and positioning sex workers as “freely choosing independent contractors.” Akosua Matthews, attorney for the British Columbia Civil Liberties Association affirmed this in her pleadings: “PCEPA enforces a binary. Were it so simple.”

“the state should not be interfering with people trying to protect their health.”

“This is not the reality of the applicants who brought forward this case, many of whom are working in very difficult and marginalized conditions,” Clamen continued. “And despite making a decision to sell sex, this does not negate the fact that sex workers are deserving of having their human rights respected.

“One of those rights is to be free from violence. Our case underscores the targeted violence created by PCEPA. PCEPA causes violence for all people in the sex industry and makes it more difficult to detect and address violence, including human trafficking, because it assumes that all sex work is violent,” Clamen said. “No type of violence can be justified by maintaining PCEPA just because the Crown thinks there are better and worse victims.”

Watch: Activists from Butterfly: The Asian and Migrant Sex Worker Support Network spoke at a rally in support of the applicants and interveners in the landmark Charter challenge.