Tenant unions could be the solution to fight rising rents

In some cities, landlords have to engage in collective bargaining with tenants

Like many transplants to Nelson, B.C., James Barbeiro first lived in resort housing when he came to the area. He had moved from northern Ontario to the “Queen City” of the Kootenays region, with easy access to all sorts of outdoor activities.

Because tourism was the area’s main economic driver, housing was always an issue. A housing report commissioned by the municipal government in 2020 found over 30 per cent of renters were spending more than 30 per cent of their income on rent. And over half were considering leaving the region. Mayor John Dooley noted these were issues he had been hearing about for years.

But when the pandemic hit, many Lower Mainlanders in British Columbia decided it was time to get the hell out of dodge. They didn’t want to be stuck inside if another wave were to strike. They started buying up property in British Columbia’s interior. Nelson was a popular spot — not only was it near skiing and hiking, but it was home to a small but growing tech centre. Housing became even harder to find.

“So many houses were just empty because they were vacation homes worth millions of dollars,” says Barbeiro. Many units are Airbnbs as well. “There's just like this hyper commodification of housing, which is making affordability… next to impossible.”

So he, and tenants from across the area, decided to do something about it. In January, they formed the Nelson Tenants Union, and this summer they began distributing a petition supporting collective bargaining rights for tenants in British Columbia. “It's exciting to see people come together and do anything to try and make things better for everyone, rather than to continue the destruction and commodification of everything that is around us,” says Barbeiro.

It’s part of Rent, Strike, Bargain, a province-wide campaign to help renters assert their rights and fight for safe, affordable and accessible housing. 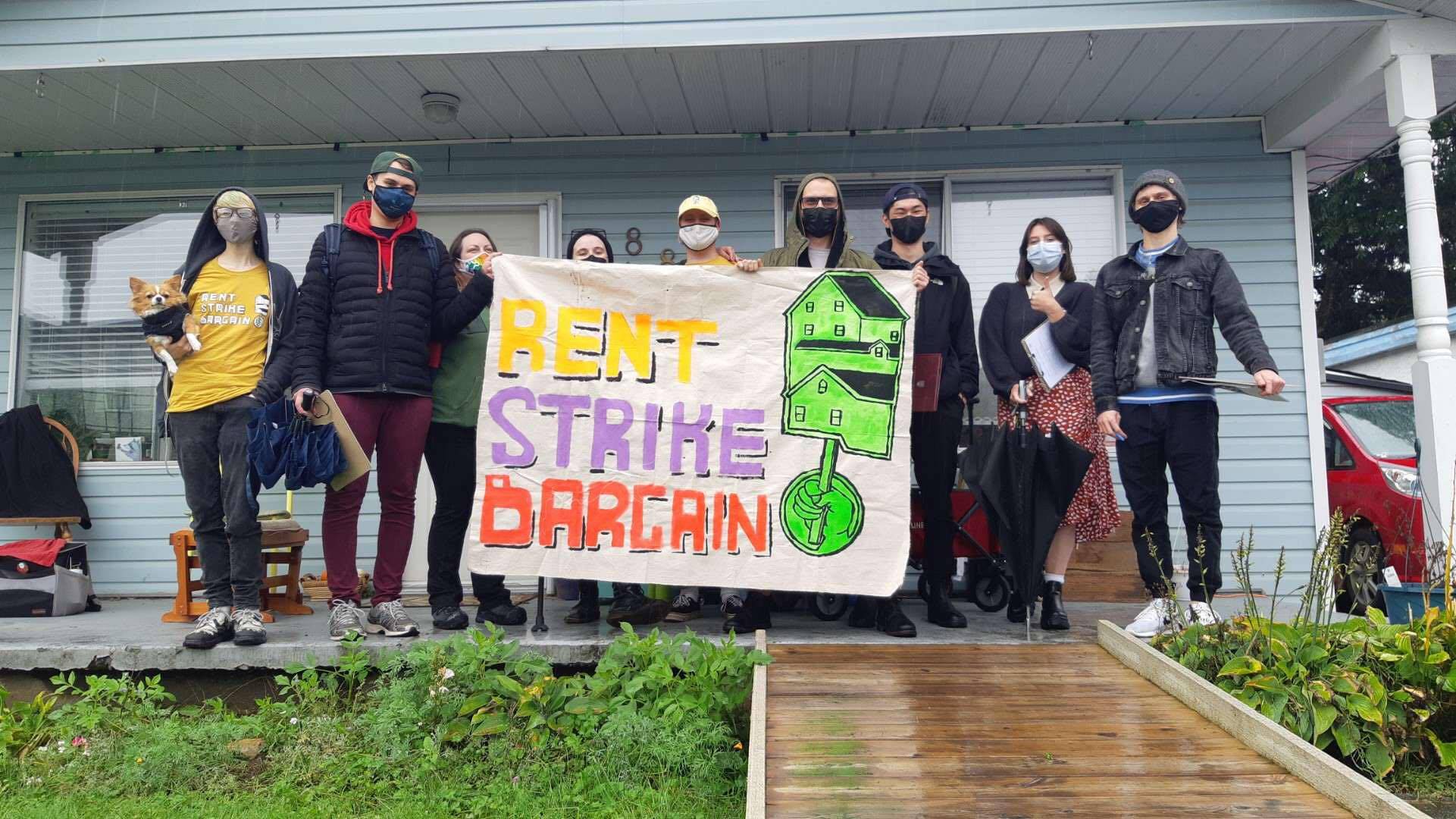 Rent, Strike, Bargain is a campaign for collective bargaining rights. Organizer James Barbeiro says he wants to see tenants harness the power of collective organizing like the labour movement. He hopes more tenants get together to negotiate with landlords for fair rents, repairs and maintenance on buildings, and fight to stop "renovictions."
Rent, Strike, Bargain

If you’re a renter, it’s been a hard 12 months. While rents dropped in major cities during the first year of the pandemic, prices have risen as people return to downtowns, sometimes smashing previous records for rental units. Only six provinces in Canada have some form of rent control in place.

In Calgary, rent prices for a one-bedroom are up more than 20 per cent from last year. You can expect to shell out almost $4,000 a month for a two-bedroom in Vancouver. In the Greater Toronto Area, prices have jumped since a brief dip at the beginning of the pandemic. A two-bedroom in downtown Toronto can now cost on average $3,300.

The reasons are numerous. Supply has not kept up with demand. There’s a lack of purpose-built rental units, as well as triplexes and duplexes. In some cities, where short-term rentals are popular, rental stock has decreased significantly. The financialization of the rental business — when large investment firms purchase buildings and try to make as much profit from a building as possible by raising rents — has also had a significant impact.

Landlords generally do not support collective organizing. “We are asking the province to make changes… so that there is a structure in place by which people can legally recognize tenant associations.”

Martine August, an assistant professor in the school of planning at the University of Waterloo, told CBC News in March that as many as 20 to 30 per cent of Canada’s rental buildings are owned by institutional landlords. "We’re seeing this kind of single-minded orientation towards trying to extract as much value as possible out of those buildings."

In the current rental environment, “there is a tremendous incentive to remove that sitting tenant” and raise the rent, Advocacy Centre for Tenants Ontario’s Douglas Kwan told CBC.

What does a tenant union do?

While provincial governments may set certain laws that landlords are bound by, there’s no obligation that they enter collective leases. So if one tenant’s apartment needs repairs that have not been addressed, or another’s rent is being increased above guidelines, they have to assert their rights individually. This can be intimidating, costly and lengthy — if the dispute is elevated to the court or tribunal level, a tenant may have to weigh whether to have legal representation.

In Ontario, the current wait time to have a case heard before the Landlord and Tenant Board is eight months.

But rather than be priced out, some people are organizing.

In the summer of 2017, tenants in a west Toronto neighbourhood mounted a rent strike to protest above-guideline rent increase and a backlog of repairs.
Screencap citynews.ca/

Tenant unions operate on similar principles to labour unions. Residents of a single building — or even from a number of buildings owned by the same landlord — can join together to bargain for rent rates, repairs to units, and a whole host of other issues that may affect them. If the landlord doesn’t come to the table in good faith, or refuses to negotiate, the union can escalate actions.

“The rent strike would be the final weapon in the arsenal,” says Will Gladman, an organizer with Rent, Strike, Bargain based in Vancouver.

It has some precedent in Canada. In 2017, tenants in a west Toronto neighbourhood mounted a rent strike to protest above-guideline rent increase and a backlog of repairs. More than 300 tenants in 12 apartment buildings collectively refused to pay rent. “They stormed the hallways of the tribunal, demanding that property manager MetCap scrap the above-guideline rent increases for the entire neighbourhood,” describes the documentary This Is Parkdale. “For these tenants, sitting across the table from corporate giants is vindicating.”

After months of protests and strikes, the landlord agreed.

But what Rent, Strike, Bargain, which was founded by some members of the Vancouver Tenants Union (VTU), is seeking first is to win tenants the right to collectively bargain in British Columbia. Since more than 50 per cent of Vancouver households are rentals, the VTU has grown into one of the larger tenant unions in Canada with more than 2500 members, “yet tenants continue to be disempowered and disconnected.”

Gladman notes that, just like in labour environments, landlords generally do not support collective organizing. “We are asking the province to make changes… so that there is a structure in place by which people can legally recognize tenant associations, once they have a majority of support within the unit.”

In Sweden, collective bargaining for rents started with radical activism in the 1920s, eventually becoming normalized into the 1940s. Today, the Swedish Union of Tenants negotiates rents for many tenants across the country. The organization has pushed back against the introduction of market-rate rentals, and lobbies for affordable housing.

The International Union of Tenants has members all over the world, including Montreal and Toronto.

One of the biggest recent wins for the movement was in San Francisco. In February, the city’s board of supervisors approved an ordinance that recognizes the right of tenants to collectively organize in buildings with five or more units. If the landlord won't bargain with the group, tenants can apply for a rent reduction to San Francisco’s Rent Board.

It’s a model that the organizers of the Rent, Strike, Bargain, campaign are hopeful can be transplanted to Vancouver. “I think people are beginning to realize more and more that they need the same kind of collective rights as tenants, as workers do,” says Gladman.

Frustration with the high cost of living and deepening inequality

The pandemic has also played a major role. According to Dissent magazine, the Los Angeles Tenants Union doubled in size during the first month of lockdown — when people’s income flatlined, but were still expected to pay rent.

While the focus is on fighting for tenants' rights, research has found that tenant unions bring other benefits. 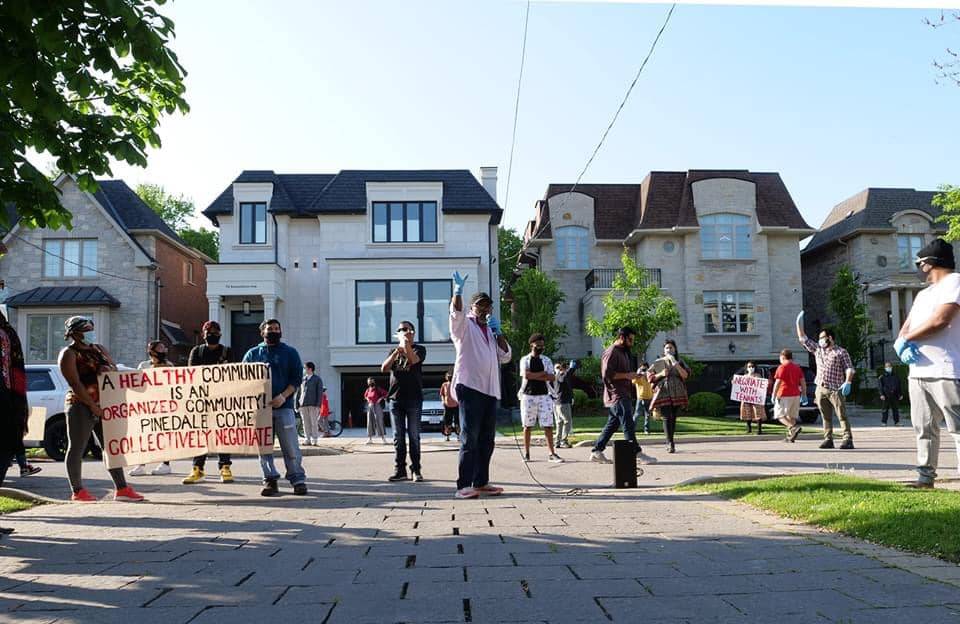 Tenants in a Toronto neighbourhood took their fight to the home of their landlord to demand fair negotiation.
Parkdale Organize

Jamila Michener, an associate professor at Cornell, and Mallory SoRelle, an assistant professor at Duke University, published a paper earlier this year where they interviewed more than 40 people from 36 tenant organizations across the United States. They found that these unions and associations centre the concerns of “economically and racially marginalized” communities in a unique way, and raised new ways for people to become politically involved.

It’s certainly been the case in Nelson. Organizers have held workshops on tenants' rights, and released a report card for the recent municipal election. They also ask people to sign the Rent, Strike, Bargain petition in support of collective bargaining rights for tenants. “It's just a process of empowering our members and empowering those who want to organize with us to be advocates for themselves and to fight for housing,” says Barbeiro.

Gladman thinks the waves of frustration many people are feeling right now about the generally high cost of living are leading to a willingness to embrace collective action. “We’re struggling to keep up with all the people that want to help out,” he says. The goal of Rent, Strike, Bargain, he adds, is to build enough collective power that the provincial government can’t ignore their demands.

“It’s exciting to see people come together and try to make things better for everyone,” says Barbeiro. “Rather than to continue the destruction and commodification of everything that is around us.”

This is part one in a series of Solutions Journalism stories, produced in partnership with Journalists For Human Rights. Each article will examine how collective action can bring meaningful change to some of our biggest problems.