The only real solution to surviving inflation is collective organizing

When Teamsters Local 91 was bargaining its collective agreement with Metro for warehouse workers in Ottawa earlier this year, the negotiation team was able to make a number of points to the head office.

One: Metro was having trouble retaining employees, because places like Amazon had begun offering competitive wages for even entry-level employees.

Two: The company would have a damn hard time replacing those workers. Research has shown that more young people are choosing white-collar professions over trades or labour.

Management listened. The new contract, ratified on April 1, included a minimum $2.25 raise, with some more senior workers receiving a $10-an-hour boost — including retroactive pay. Starting salaries begin at $20 — about $1.50 more than a living wage in the Ottawa region.

“There was a full recognition on both sides that the world changed,” said Brian A. MacDonald, the president of Teamsters Local 91.

For the last year, things have gotten much more expensive in Canada. Nationwide, rent prices have spiked 11 per cent in the last year. The average home costs over $800,000. Gas prices have hit record highs in British Columbia, and gone up everywhere else.

One of the causes of these price increases is inflation. Some commentators blame everything from green economy initiatives to foreign policy. But that doesn’t do much for working people, who suffer the brunt of it just trying to live.

There is, however, one way to protect people from the rising cost of living: organizing for higher wages.

What is inflation anyway?

“Inflation is an economic phenomenon whose nuances remain a mystery even to economists,” Hamilton Nolan wrote in In These Times in April. “That hasn’t stopped politicians from wielding it as a weapon to villainize anyone they wish, from environmentalists (blamed for rising gas prices) to annoying outsiders (condemned for driving up housing costs). In reality, we know one group will always pay the price for inflation and bear the burden of increasing costs: working people.”

As the inflation crisis deepens, frontline workers across Canada have been organizing for higher wages and stronger benefits.
Canada Today

Take your groceries: food prices are rising at the fastest rate in 40 years. It’s a price hike that all of us feel, but it is acutely painful if you have less income to begin with. As food costs eat an increasingly larger share of the paycheck, it’s hard to spend money on anything else.

But, as Nolan points out, when past periods of inflation came around, working people had something that protected them: unions.

“In the late 1970s and early 1980s, as inflation fears were at their most drastic, well over 20 per cent of American workers were union members, compared with just over 10 per cent today,” he writes.

Collective agreements protected wages, and raised them as workers demanded pay that matched the costs that they were experiencing. Unions were also able to negotiate cost-of-living increases: wage hikes that kept pace with yearly inflation so workers’ pay wouldn’t lag behind.

Stephanie Ross, the director of the School of Labour Studies at McMaster University, notes that as inflation waned in the 1980s, and employers put pressure on unions to make concessions, these kinds of wage increases became less common in collective agreements. “For a lot of unions, it was an easy trade to save jobs or get a wage increase, since there was no money flowing to members from cost-of-living clauses for ages,” Ross said in an email. “And, like all decisions that make sense in the short term, they often have long-term consequences that are quite negative.”

Those long-term consequences meant that unions and labour organizers were in a less-than-ideal position to negotiate wage increases when they were needed.

Take minimum wage: When Mike Harris became Ontario premier in 1995, his government froze the minimum wage at $6 an hour for nine years. By 2000, a push for a $10 minimum wage was underway; these days, the province’s minimum wage sits at $15.50, but the cost of living has gone up so much that now activists are campaigning for $20 an hour.

“Minimum-wage workers don’t go on holiday in Europe. They’re not going to buy a car from Germany,” says Deena Ladd, executive director of the Workers’ Action Centre in Toronto. But they will spend money in the local economy, such as buying groceries, or taking their family out for dinner. That’s why the focus is on lifting on the floor.

Ladd estimates that when the minimum wage increased from $11.60 to $14 in 2018, it likely pumped billions into local economies because people had more spending money.

If life had continued apace, perhaps wages wouldn’t need a large bump. But stability went out the window as soon as the first COVID case was confirmed.

The pandemic interrupted trade and business, and some industries have not yet recovered. The war in Ukraine has also raised prices on many consumer goods, including grain and other groceries.

Nolan notes that in many cases, it’s labour that gets blamed. In August, Bank of Canada governor Tiff Macklem told a business lobby group to “hold the line on wage costs,” and not to negotiate higher wages into contracts with their employees, to keep inflation down. (This, despite the fact that prices exceed wages by about 5 per cent.)

“Surely it is not the role of the Bank of Canada to undermine the collective bargaining power of workers,” Bea Bruske, president of the Canadian Labour Congress, wrote in the Toronto Star.

Despite the economic downturn, some companies are making record profits. Loblaw Companies recorded a 40 per cent profit increase in the first quarter of 2022. Metro racked in $275 million in profits in its third quarter. Alimentation Couche-Tard, a Canadian multinational operator of convenience stores, reached net profits of $872.4 million.

“If you've historically always underpaid the people doing this job, then to just focus on inflation will not bring them up to par,” says Catherine Cosgrove, the director of national communications and public affairs at Teamsters Canada. 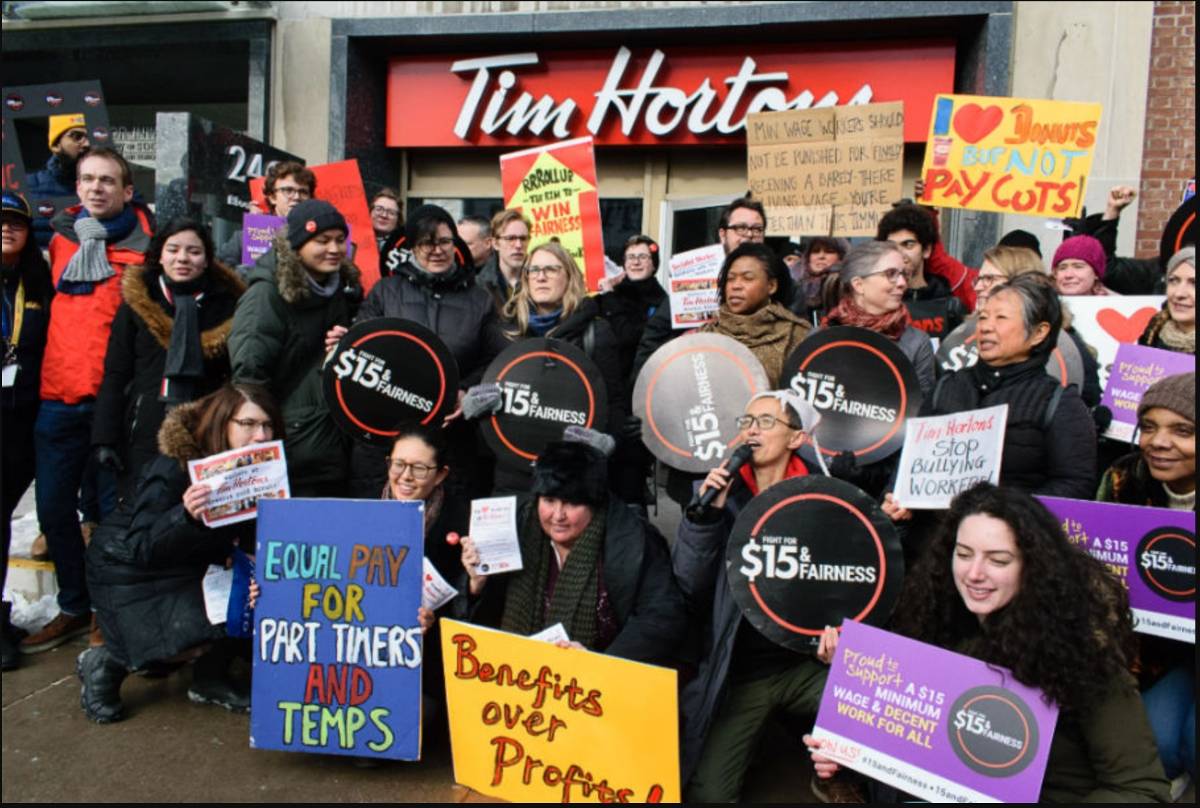 Workers demonstrate outside of a Tim Hortons franchise in Coburg, Ontario.
University of Toronto

Keeping up with inflation is not an argument that convinces many companies to increase wages if they can still keep employees without needing to pay them more. But, Cosgrove said, the workforce is changing. In many sectors, companies can’t find workers. Housing construction is slowing because there aren’t enough tradespeople. Fast-food chains like Tim Hortons are losing workers because wages have stagnated. Forget attracting new workers: what is attractive, right now, is retaining current employees who don’t need to be trained.

Cosgrove says that, when pushing for wage increases from employers, she would point not just to inflation but also to the question of whether they’re creating an environment in which their workers would want to stay.

That’s exactly what happened with Teamsters Local 91. “The way that we approach it is we say: ‘Look, if you have anybody in your system today, you have to pay to keep them here,’” says MacDonald. The resulting contract not only increased wages, but included a provision to raise the base wage 50 cents each year.

It’s just one example. MacDonald recently represented a retirement home that had a 97 per cent employee turnover rate. Teamsters negotiated a $2.50 wage increase to retain employees. In September, Groupe Robert Transport workers ratified a collective agreement that saw salary increases ranging from approximately 13 to 22 per cent. Saputo Dairy Products reached a tentative agreement with Unifor on a deal that got workers inflation raises.

A rising tide lifts all boats. “You're seeing some of the non-traditional industries coming forward looking to organize their labour,” says MacDonald. His local is organizing volunteer firefighters in the Ottawa region. In Western Canada, a growing number of Starbucks have voted to unionize. Because the worker shortage is being felt in all sectors, workers have much more leverage to organize.

“What we've been showing is that if union workers and non-union workers work together to raise the floor, both benefit.”

When the Workers’ Action Centre launched the Fight for $15 campaign in 2015, Unifor began an educational campaign about how work in grocery stores — once steady, full-time employment for a mainly female workforce — had become precarious and low-paid. When the union started bargaining for grocery workers it represented, it was able to say to the employer: The minimum wage will likely be going up, so why not be a leader? The resulting agreement guaranteed workers would always get at least 10 per cent more than Ontario’s minimum wage.

“What we've been showing is that if union workers and non-union workers work together to raise the floor, both benefit,” says Ladd.

Workers have more power than they realize

Canada’s unionization rate hovers around 30 per cent, which roughly puts us in the top 30 nations in the world for unionization — far higher than our American neighbours, whose rate sits at about 10 per cent. It’s enough that significant wins can create ripples felt through communities.

This, combined with the worker shortage and record profits, presents an opportunity for Canadian workers if they decide to organize. They have the leverage to be able to demand higher wages that will better insulate them from the shocks of inflation.

“I think there's an opportunity for workers to finally be recognized for what they contribute to employers, to companies, and to society,” adds Cosgrove.

This is part two in a series of Solutions Journalism stories, produced in partnership with Journalists For Human Rights. Each article is examining how collective action can bring meaningful change to some of our biggest problems. Read part one and two here.