In Quebec’s strike, students are the real targets of intimidation

Education minister had his dinner interrupted, but young people are bleeding in the streets

Intimidation is the new mot du jour in the Quebec mediasphere. Education minister François Blais has decried the “intimidation” he was subjected to on Monday when students approached him in a restaurant to protest his government’s policies.

The students, according to the 1625 Foundation (an anti-student-movement organization with established links to the federal Conservative party), are intimidating their fellow students by enforcing the strike mandates voted for by a majority of their peers. Then of course, there is the intimidation and violence being inflicted upon the poor taxpayer. From broken windows at UQAM (never mind, turned out the cops did that), to broken vending machines at UQAM to litter at UQAM, these students are costing us money goddammit!

Get the idea? The students are masked bands of hoodlums hellbent on the destruction of all social order and the looting of your sock drawer. Apart from the far more balanced pages of Le Devoir and sometimes La Presse, that’s the unilateral image being presented to Quebecers.

Little wonder then that a new poll shows support for student strikers has fallen below 30 per cent. But here’s the problem with that image: it’s not accurate.

I covered the student strike in 2012, and I have covered the one this spring. I may not always agree with their tactics, but I absolutely believe in the right of the youngest generation to have their voices heard on the question of what sort of society they want to live in. I consider it their birthright to be inconvenient and annoying to the rest of us. The inconvenience of people with whom we disagree loudly expressing their views isn’t a social problem to be regulated; rather it is the wages we pay to live in a democracy.

Most of those in media who have actually covered protests, especially night protests when the mainstream cameras have gone home, are sympathetic to the students.

• The faces of April 2: profiles from Quebec's anti-austerity movement

We walk with these students, we watch them laugh, we see a peaceful protest and then, before we can blink, we’re running from a police charge, dodging tear gas canisters and watching through the smoke for rubber bullets. We see injuries, we see blood, we see broken bones and teeth and welts and bruises. In 2012, multiple students lost an eye. Colleagues in the press have ended up in hospital this spring for trying to do their job. The provocation, if there is any, is always trivial. It’s an excuse to do what these cops want to do: punish the students physically.

Which brings us to the facts. This student strike began on March 23. For the first two weeks overwhelming violence was reported, but it was all on the police side. Ricochet has a variety of video reports from those days, and you can see for yourself that the violence was categorically one-sided.

With the exception of the odd thing thrown at police, the discipline on the student side was noteworthy. Then two things happened: first, after an ASSÉ congress refused the advice of their executive to postpone the strike to the fall and fired that executive, the momentum behind the movement fell off a cliff. It became increasingly clear to downtown students that they would not be the vanguard of a broad social strike this spring as students in the regions did not join them. 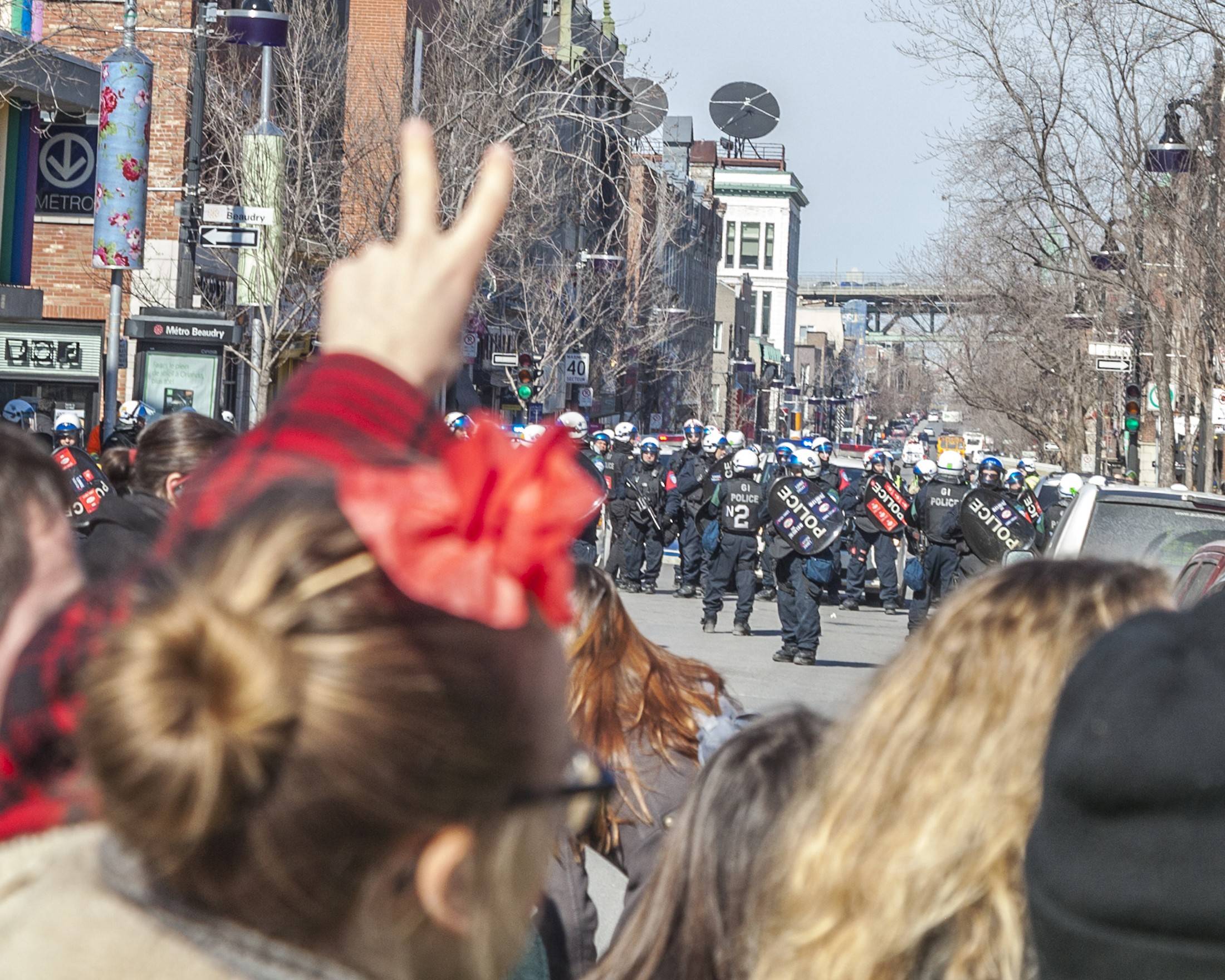 Second, on April 9, heavily armed riot police entered the halls of UQAM to evict students from their own campus in response to an injunction ordering classes to be held. As the cops advanced on students, a line of professors stepped in between the two groups, linked arms and sent a clear message to police: “You can beat us all, or you can beat none of us.”

Police retreated and students and teachers alike occupied the main hall of the university in response to this intrusion on their campus. They demanded the resignation of the rector, no more cops on campus and an end to the targeted expulsions of student leaders.

In the context of this one occupation, which was brutally dispersed later that evening, most if not all significant allegations against students for rioting, looting, vandalism and related crimes took place.

What students clearly did do is systematically disable or break all surveillance cameras, break and empty several vending machines, chain and lock doors, and make a mess.

On other occasions, few and far between, students have been accused of breaking car windows (of course, the cops have been caught doing that as well), throwing projectiles at police, building barricades and tossing tear gas canisters and rubber bullets back at police lines.

Now here’s the problem I have with how the media is reporting this.

I get that people are really upset about anything being broken. But what about people? How many broken people is too many? Because against the most minimal of provocation, the police of both Montreal and Quebec City have behaved with more reckless abandon than I have ever seen, including at the height of the 2012 strike.

If the students are to be condemned, it is for the sort of petty vandalism that inevitably accompanies mass movements of people. The police, on the other hand, have undertaken a systematic and brutal campaign to punish the students, physically, for their disobedience. 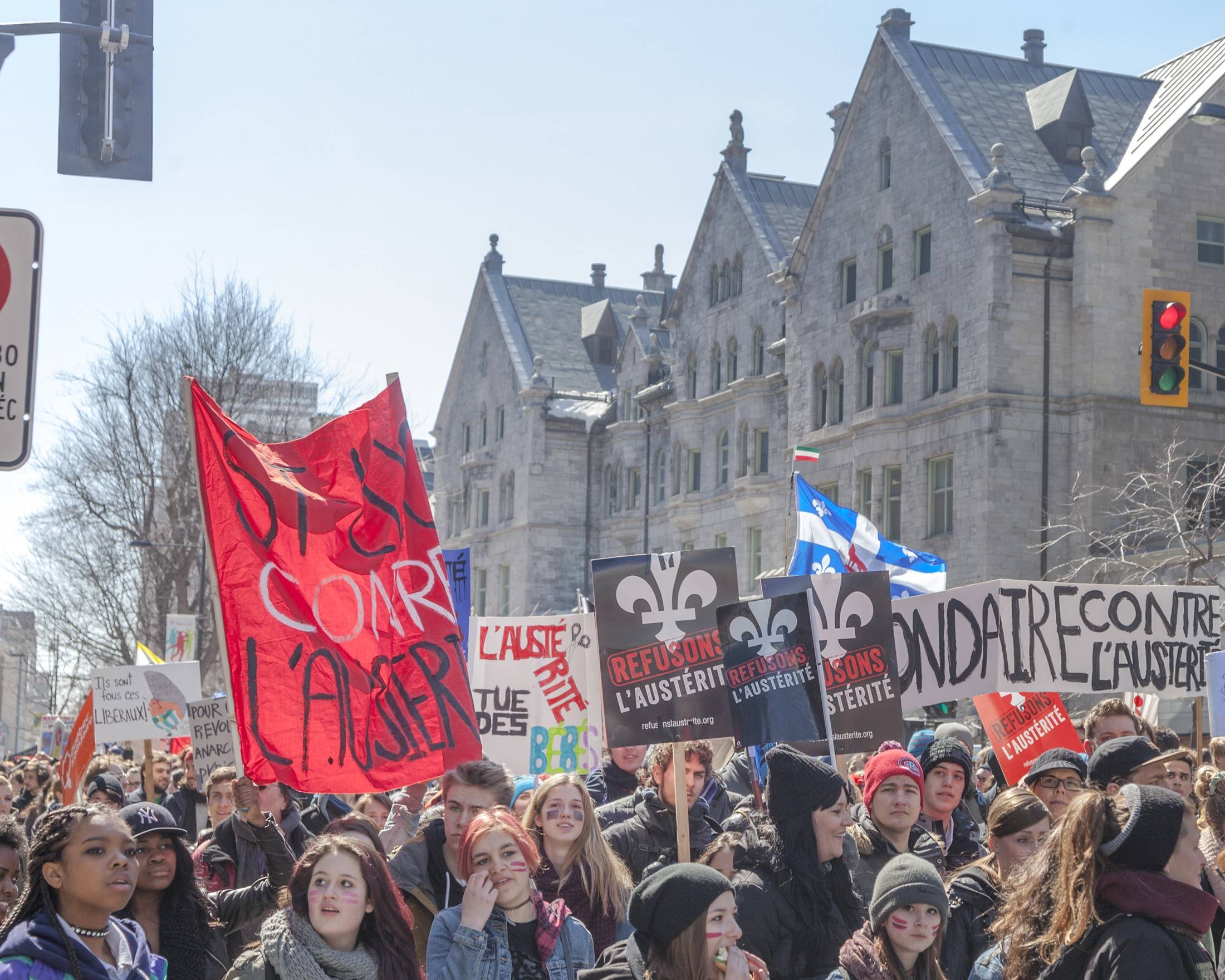 It brings to mind some sort of 1950s stereotype of bad parenting: when your kids get annoying you just hit ’em until they shut up. The police think they are parents to these unruly students, and they plan to keep hitting them until they finally shut up.

The terrifying part is they seem to have the support of a large chunk of the population in this campaign of corporal punishment. They certainly have the support of the talk radio hosts and columnists who feel entirely comfortable urging on the infliction of ever more severe violence upon the youth of our society for the crime of disagreeing with how it is run.

To those of my colleagues who urge on such violence, like the Quebec radio host who said a police dog who bit a teacher and father of two deserved a treat, I say you’re egging on a police force that is clearly out of control, not just with students, but also in their continued racial profiling and numerous unjustified shootings and abuse of the socially isolated (a homeless man without a shirt was threatened with being handcuffed to a pole in –20 C weather last year by a Montreal cop). Even strait-laced citizens, like a middle-aged father with his teen daughter in the car, can fall victim to their excesses if you ask too many questions. There have been few to no consequences for Montreal police officers who kill or injure civilians in recent decades. Impunity inevitably leads to excess. Without real consequences for their actions, our police force often acts out its own judicial agenda.

A judge has reprimanded Montreal police for falsifying thousands of tickets, they continue to use a bylaw he ruled illegal to shut down protests, and one student, who was never accused of breaking any law, received over $10,000 in tickets for bylaw infractions while protesting in 2012 and 2013. She’s currently suing the city and police force for political profiling.

Commentators demanding the police put down these protests by any means necessary should be clear. What they are really suggesting is that we take a mean-tempered dog with a history of violence off the leash in a crowd of our children and see what happens. Here’s what I think will happen: they’ll kill someone.

These cops are dangerous

They’ve already come close, many times. Naomie Tremblay-Trudeau, a student shot by police with a tear gas canister, was told that if it had hit her face differently she could have died. McGill Daily photographer Shane Murphy was shot in the side from such close range with a rubber bullet that doctors said if it had hit a rib it could have punctured a lung and killed him. Gabriel Marcoux-Chabot, a teacher bitten by a police dog, was lucky it was his arm. What if next time the dog gets to the throat? What if the location of impact is a little different the next time the police misuse equipment to inflict pain? At every protest, cops swing inflexible batons with their full strength. Direct contact with the head from such a weapon can and does kill. Cops already put one student’s head through the window of a van, then casually walked off as he was rushed to hospital.

The students are being isolated, marginalized and cast as outlaws. That’s why they wear masks, why they refuse to speak to the media, why they close their general assemblies. They’re terrified, but they refuse to be intimidated. Sometimes their courage outstrips their strategy, but it’s hard not to admire their heart.

These aren’t criminals, they’re students. They’re the inheritors of our society, using the tools our history teaches them to use to try and influence its shape. Sometimes they’re wrong. So sometimes are we all. 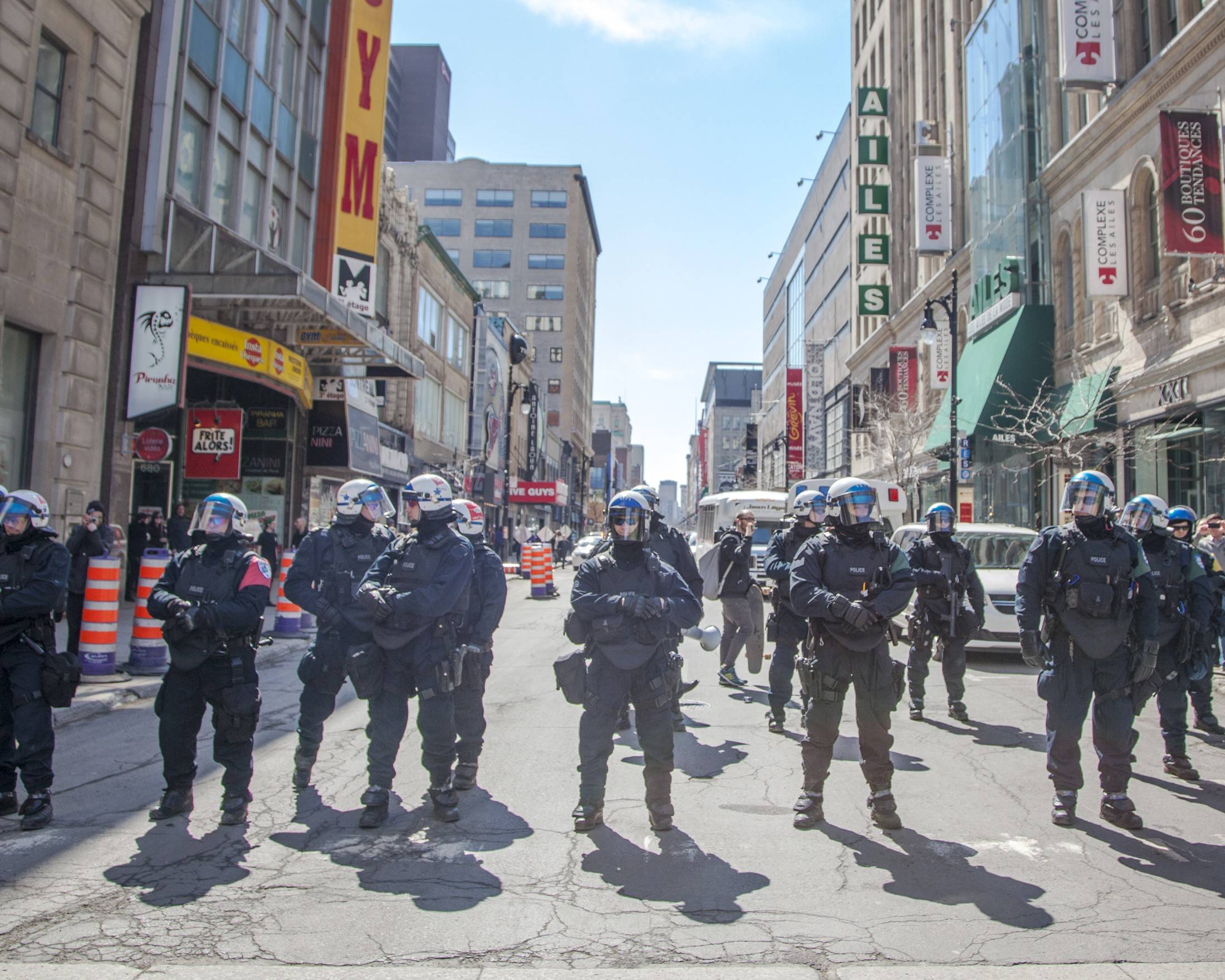 Strike votes were held across Quebec this spring, for varying lengths of time. In some schools, students voted to strike. In many others they did not. That’s democracy, the same kind practiced at party congresses of the governing party, and students seeking injunctions are opting out of the difficult task of winning over a majority of their fellow students. In short, they’re asking the courts to overturn the result of a vote with which they disagree. In some schools, students voted to hold picket lines to enforce their collective decision. If students trying to ignore that decision are made to feel uncomfortable about their choice, well, that’s kind of the point of a picket line.

Now I get that some people won’t agree with me, and by your way of thinking this is all the students’ fault. You’re welcome to the position. But please stop telling people it’s the students who have been violent or engaged in intimidation.

As Ricochet’s coverage reveals, it is the police, and the government which directs them, who have gone to extraordinary and unprecedented lengths to intimidate the students. Weeks of violent repression have radicalized the students, and they are lashing out in entirely predictable ways at an armed force that consistently does physical injury to their friends, family and teachers. That doesn’t mean I condone throwing ice at cops, or breaking vending machines, but humans are predictable. Treat them this way, and the reaction is inevitable.

I think the government and police know this. I think they want to provoke the students into doing things, like breaking vending machines, which will rob them of the support of the population. Then, isolated and unpopular, the police will have little trouble breaking the student movement.

The trouble with this tactic, leaving aside for a moment the sticky wicket presented by the constitution, is that the police are at real risk of killing someone soon at a protest. And if they do?

That’ll be on you Mr. Couillard.