Anger at Conservative cuts to maritime safety mounts in Vancouver

Seven activists interrupted a press conference held by industry minister James Moore early Friday morning in Port Moody, a suburb just outside of Vancouver, B.C. The activists, wearing full protective suits, masks and gloves, carried rocks and logs covered in oil found on the beaches of North Vancouver after last week's fuel spill. Moore was in town to announce a $100 million investment in his riding, one that he claimed would increase safety along the waterfront.

Your ad here
Automated ads help us pay our journalists, servers, and team. Support us by becoming a member today to hide all automated ads:
Become a member
Share this
0 Comments
Share this
0 Comments
UPDATE April 18, 8:11 EST The NDP have announced their intention to introduce a motion in the house this week to reopen the closed Kitsilano coast guard base and reverse cute to maritime safety.

The evidence presented to Moore was picked up on the shores of Ambleside beach, not far from the minister's constituency office in Port Moody, where activists convened later that day to deliver a petition signed by over 15,000 people demanding that marine services be reinstated.

The demonstration was held in response to recent public statements by the minister suggesting that taking six hours to begin containment of an oil spill is “very impressive” and a “world-class” response. Protesters were also angered by his recent insistence that the closure of the Kitsilano coast guard base did not play a role in what B.C. Premier Christy Clark called an unacceptably slow response.

“This is on the beaches where our friends and family play and live. Would you like to touch it?” one protester asked Moore. “I’m fine. Thanks” replied the minister.

North Vancouver MP Andrew Saxton watched as the activists piled the evidence on the hijacked podium.

“We’ll leave this for you to clean up,” an activist wearing a white suit, gloves, and a face mask asked Moore as he walked away. “Would you like to borrow some gloves? Is it funny? you were just laughing, is it funny to you?” 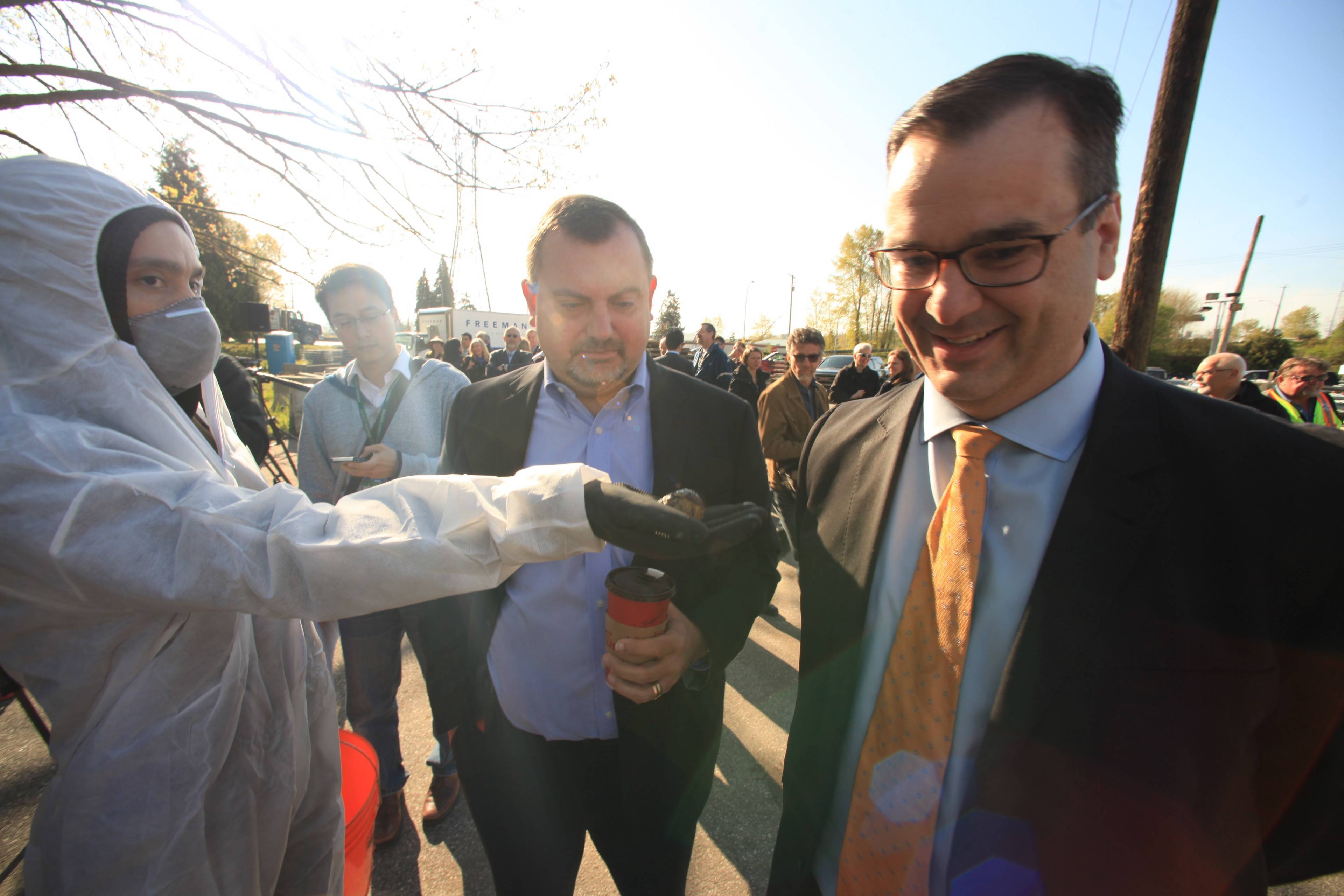 “We have a great announcement for the people of North Vancouver that is going to improve quality of life, clean the environment and make the north shore safer!” declared Moore as activists attempted to present him with an oil-covered rock, which he refused to accept.

“People are sick, people have nosebleeds, and there was no response,” called out one activist.

“Will the coast guard base be reopened?” Ricochet asked Moore. “We have one of the best coast guards in the world,” he responded. “We have more coast guard resources now than we have ever had in British Columbia, and 80 per cent of the spill was cleaned up within 36 hours.”

Ricochet asked Fred Moxey, retired commander of the closed Kitsilano base, what he thought of Moore’s claim that the coast guard had more resources available than ever before.

“In the Vancouver area that’s totally incorrect. There is nothing in Vancouver as far as the coast guard goes. They removed that. They have turned their backs on search and rescue and the environment.” 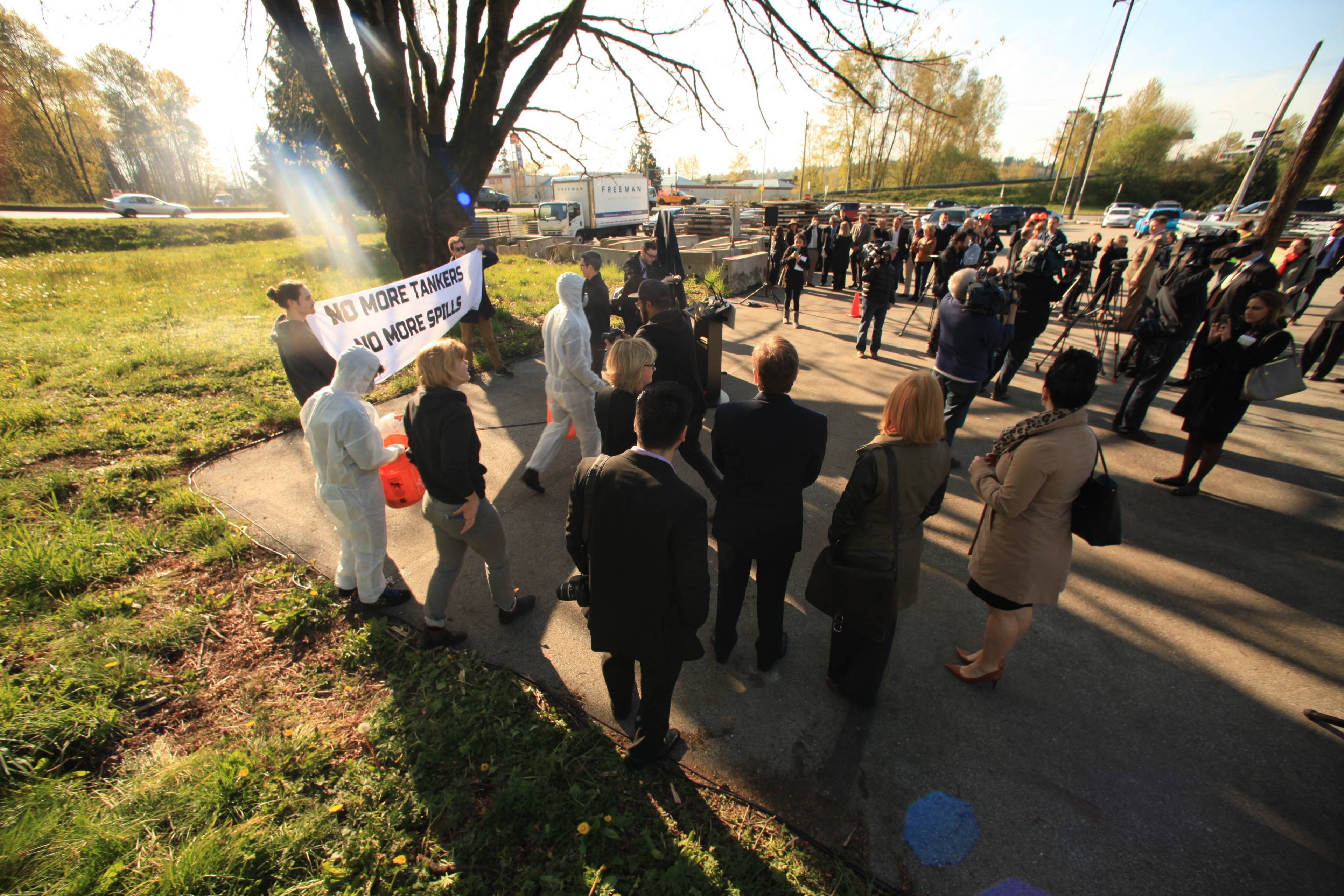