On Friday, Apr. 17, Montreal municipal court Judge Denis Laberge jailed a student named Hamza Babou and threw away the key. Facing a series of summary charges for his role in the student strike, none of them rising to the level of a criminal accusation, Babou will finish his semester in prison after Laberge took the unprecedented step of imprisoning him through the conclusion of his trial.

“You’re involved in a crusade, and it’s difficult to see where it will end” the judge said, as he passed judgement. “These are very serious charges, made in a context where UQAM seems overwhelmed by certain groups of protesters who want to block courses.”

“The public would be discouraged [if I freed you]. A well-informed public would say: the municipal court, it means nothing... You defied the injunction like it didn’t exist. In this context, I have difficulty thinking you can meet your conditions [if you are released].”

Nevertheless, the judge continued, “I don’t want you to think that you’re paying for the crimes of others.”

“As an intellectual, one should ask questions about the meaning of this world” - Hamza Babou

Babou is an undergraduate student in sociology at UQAM, the university of Quebec at Montreal, and this is his first encounter with the justice system. He is a member of the Association facultaire étudiante des sciences humaines (AFESH-UQAM), a student association which remains on strike and which had continued to disrupt classes into last week. “I’m someone who loves to be socially engaged in my life,” he told the judge.

Asked about his first night in prison, he replied “It’s awful. I do not feel good. I’m super stressed out … I’m scared.”

Babou told the court how he had succeeded in being admitted to university after going back to school to finish his high school diploma in adult education, and spoke of his commitment to finishing his degree in sociology. His mother also spoke, telling the court “he’s a very good boy, always generous of spirit. I believe I raised him well… I am proud of my son, I have nothing but good things to say about him.”

• In Quebec's student strike, students are the real targets of intimidation

• VIDEO: Pepper spray, a kettle and a great big hug at the student strike

Babou also promised to respect any order to stay away from his school, but none of it was sufficient to secure his release.

According to his lawyer, Véronique Robert, it’s clear the authorities want to make an example out of him. “It looks like a political judgement,” she told La Presse.

Assault with a weapon (AKA silly string)

An organizer in the student strike movement at UQAM, perhaps Quebec’s most political campus, Babou is charged with fourteen counts of assault, armed assault, mischief, stalking, uttering threats and unlawful assembly — all in relation to events on April 15, when security confronted students trying to enforce a strike mandate voted by their peers at UQAM’s pavillon J. A. DeSève.

The armed assault allegedly consisted of discharging silly string from an aerosol can into the face of a security agent, and no injury was reported. All the accusations are summary charges, a process reserved for charges not considered serious enough to be criminal.

On Freedom We all know that the state can’t give you free speech, and the state can’t take it away. You’re born with it, like your eyes, like your ears. We all understand that. Like old Campbell said, freedom is something you assume. Then you wait for somebody to try to take it away from you. The degree to which you resist, is the degree to which you are free. - Utah Phillips, Direct Action (1999)

Robert noted that the majority of those accused, even for serious criminal offences, are released on conditions established by a judge. “It is exceedingly rare to hold a defendant in custody at this stage, especially for summary offences, because they are presumed innocent.”

The purpose of the bail paid by those released in advance of trial is to guard against flight. In a case such as this, where flight isn't an issue, it's hard to escape the impression that the judge is using pretrial detention as a punitive measure, enacted prior to a trial or a finding of guilt.

Questioned in court on his ideas, notably on anarchism, he replied, “These are my personal, political opinions. It’s like if I asked you if you voted PQ,” argued the student as he plead not guilty. “As an intellectual, one should ask questions about the meaning of this world.”

Babou’s next court date is set for April 29, and the prosecutor has announced her intention to seek jail time if she secures a conviction. Win or lose in court, Babou will serve at least 13 days in jail in pretrial custody. That’s more than many serious offenders ever serve, never mind white-collar and financial criminals.

This unprecedented, and likely unconstitutional, judicial detention of a student for a first offence (assault with silly string) is part of a pattern of behaviour by the government and university administration, aided and abetted in this case by a municipal court judge who appears oblivious to due process and intent on punishing anyone who dares defy his court’s authority.

The administration can’t expel all these striking students, but it can target their leaders. First, UQAM announced the expulsion of nine elected student leaders, two of whom represent students on the university’s board of directors, for their roles in the strike. Now, one of the leaders who rose up to replace those nine has been jailed indefinitely without having been found guilty of any offence.

A pattern of political profiling

These actions fit a pattern of what constitutional law expert Julius Grey describes as political profiling. He’s representing another young student, Katie Nelson, who was issued over $10,000 worth of tickets for jaywalking, loitering, littering, and other minor offences while peacefully participating in protests between 2012 and 2013. A self-described anarchist, Nelson claims to have been frequently stalked by police officers who called out to her by name, and flaunted their knowledge of details of her life, including where she lived. Grey is suing the city and police force on her behalf pro bono, seeking to establish a constitutional precedent which would afford the same protections to political beliefs as are currently afforded to religious ones under the charter.

UPDATE Apr. 21 2:48 EST Grey told CJAD radio the following regarding Babou's case: “There are three reasons why a person would be detained before trial: one is because he's dangerous and that's not the case, people who are accused of murder, of drunk driving causing death, people accused of all sorts of very serious offences are usually out. The second reason is that he might not show up for trial, and the third is the public's confidence in the justice system. The idea that the public would be shocked by releasing a student demonstrator, where it's not shocked when most people accused of mass corruption, for example, are out, is a sad illustration of the state of our society. To keep people in prison pending trial is one of the most dangerous things you can do for a number of reasons. One is because the person is presumed innocent, and the second is because when you're in prison you have a harder time preparing your trial.”

Student democracy is strong in Quebec, and as observers saw with the brutal sacking of the former ASSÉ executive a few weeks ago, any perceived deviation from the positions adopted by students in a general assembly is punishable by immediate firing. These students were elected to represent their peers, or rose up to do so organically, and if they weren’t doing it someone else would.

Now they’re expelled and/or in jail. For silly string. For broken vending machines. For ideas. 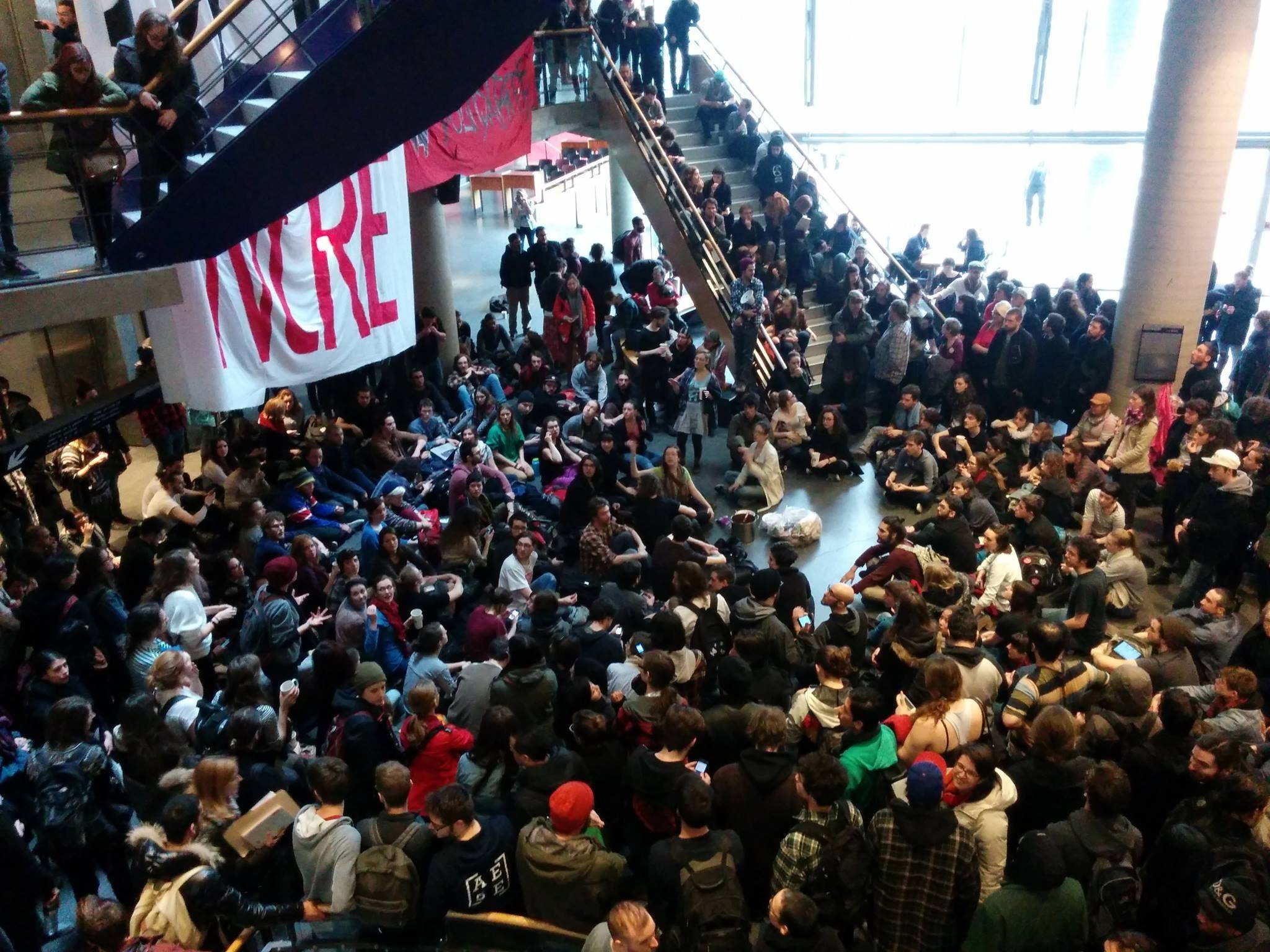 The occupation of UQAM
Ben Prunty
As a top polluter, what is Canada’s responsibility to humanity?
The Dirty Dozen: ‘Carbon bombs’ threaten to blow up Canada’s climate commitments
I was raised in an Indigenous community — but even that doesn’t make me Indigenous