What the hell is happening in Alberta?

Even seemingly invincible dynasties sometimes come to an abrupt end. This is a lesson that Edmonton, the City of Champions, learned painfully with its Oilers hockey team.

Your ad here
Automated ads help us pay our journalists, servers, and team. Support us by becoming a member today to hide all automated ads:
Become a member
Share this
0 Comments
Share this
0 Comments
UPDATE April 24: A new poll has the Alberta NDP in majority territory, as pundits and opponents alike concede that Rachel Notley won a decisive victory in Thursday's debate. Our latest report is here.

Now the Alberta capital appears to be on the brink of another stunning reversal of fortune, this time in the political arena.

With an election on May 5, five decades of Progressive Conservative rule in Alberta could be coming to an end in just a couple of weeks. Polls show Jim Prentice and the PCs in third place, trailing the Wildrose Party and the NDP. The Liberals are running a distant fourth. The Wildrose also threatened the PCs’ grip on power during the 2012 campaign, but the NDP surge is unprecedented in recent Alberta history.

The numbers putting the PCs in third are a pattern, not an isolated poll, said Éric Grenier, the founder of the analysis site ThreeHundredEight.com, this week.

“In the three polls conducted by different polling firms since the beginning of April, Wildrose has registered between 30 and 31 per cent, the PCs between 25 and 27 per cent, and the NDP between 26 and 28 per cent. What first looked like a fluke at the end of March has been confirmed again and again.”

To help explain the PCs’ decline and the stunning rise of the provincial NDP, Ricochet reached out to Albertans on the ground and other observers of provincial politics for their thoughts.

An Orange Wave in Alberta?

For perhaps the first time, “there’s an electable, relatable alternative on the left that wants to make the rich pay their fair share,” said Aditya Rao, a former NDP political staffer in Alberta now studying law at the University of Ottawa.

The NDP’s election platform, released a few days ago, includes tax hikes for corporations and the reversal of cuts to health care and other services.

The new party leader is Rachel Notley, a charismatic 51-year-old lawyer who has been the MLA for Edmonton-Strathcona since 2008. Last fall, Notley won the party leadership race with 70 per cent of the vote. She is the daughter of former party leader Grant Notley, who died in a plane crash in 1984 after serving for many years as a member of the small NDP caucus in the Alberta legislature.

“The PC inability to manage the economy is now entirely undeniable.”

But the new NDP leader, however relatable, can only be part of the explanation. After all, Jim Prentice is still a new premier, and he was easily elected into the legislature in October 2014 as part of a PC sweep of four by-elections. With 61 of 87 seats, Prentice looked unassailable.

In fact, Prentice appeared to have eviscerated his only competition earlier this year, when he orchestrated the defection of two-thirds of the Wildrose caucus, including party leader Danielle Smith. It was a political master stroke that left observers asking what the point of holding an election would be.

But the precipitous plummet in the price of oil has drastically altered Alberta’s political landscape.

How has the drop in oil prices changed Alberta politics?

In the past eight months, oil has gone from over $90/barrel to $50/barrel. This decline has meant fewer royalties for the province, and the results have been politically toxic. Prentice’s government projected a budget deficit of $5 billion for the coming year, and announced tax increases along with fee hikes for everything from marriage certificates to traffic tickets. On top of this are cuts to public sector salaries.

In other words, Prentice is running his election campaign on an austerity budget, even if that terminology isn’t used much in Alberta. Whatever one calls it, asking people to pay more for less doesn’t tend to go over well.

“There is significant anger from all sides of the political spectrum about the Premier’s handling of the province’s current finances,” Ricardo Acuña, executive director of the Parkland Institute, told Ricochet by email.

“On the left there is anger about new or increased service fees, taxes, and health care premiums for Albertans while nothing has changed in terms of corporate taxes and royalties and the government is still cutting public services. On the right there is anger about the fact that despite increased taxes and fees the government is still running a $5-billion deficit. The PC inability to manage the economy is now entirely undeniable.”

Does this mean Alberta is rethinking its petrostate policies?

Perhaps the most significant poll numbers to come out this month in Alberta weren’t directly related to voter intention in this election campaign. CBC’s Vote Compass found a whopping 86 per cent believe the Alberta economy is too dependent on oil and gas, while 71 per cent said that companies should have to pay higher royalties.

“Historically Alberta voters have displayed their anger with the PCs not by voting against them, but by staying home.”

These numbers reflect the fact that a long overdue debate is finally taking place in Alberta and across Canada about Big Oil, economics and politics. In recent months, for example, mainstream media outlets across the country have picked up on contrasts between Norway’s long-term management of oil revenue and Alberta’s short-term view, a critique previously confined almost exclusively to leftist policy journals and alternative media.

It’s worth pointing out, however, that none of the major parties in the Alberta election are proposing a systemic change in approaches to oil and gas development. The NDP’s Notley has said she supports pipelines and tar sands projects, but that her party would seek to ensure that more of the product is refined and upgraded in Alberta before being exported. She has also argued that the oil industry must be regulated according to principles of sustainable development.

These positions, however, appear untenable or contradictory, at least if sustainable development addresses the consensus articulated by international climate scientists. The latest research, published in the journal Nature and reported in the Guardian, suggests that keeping global warming to under 2 C would require almost all of the Canadian tar sands to stay in the ground. From an ecological and climate perspective, it doesn’t so much matter where the refining happens — the problem is that it’s being dug up and burned at all.

Can the PCs pull off another comeback?

It’s worth remembering that pollsters seemed pretty certain the Wildrose was going to dethrone the Conservatives back in 2012. The stunning and apparently come-from-behind win for the PCs in that election is important to keep in mind this year.

Lesley Vaage, a politically engaged Albertan who describes herself as non-partisan, threw some cold water on the NDP poll numbers. “An NDP surge has yet to be fully demonstrated or proven,” she told Ricochet by email. “We're seeing public opinion rise in favour of the NDP in certain parts of the province — largely Edmonton... one small, albeit important, part of the pie.”

It’s true that NDP support is concentrated in Edmonton, but at least some polls suggest breakthroughs are possible in Calgary, where the party hasn’t elected an MLA in over 20 years.

A shake-up as significant as an NDP government in Alberta wouldn’t necessarily portend doom for Harper’s Conservatives.

“Historically Alberta voters have displayed their anger with the PCs not by voting against them, but by staying home,” Acuña noted. “An angry Albertan may vent his or her anger to a pollster, but will simply not bother voting on election day.”

In the past, including in 2012, many progressive or liberal voters cast a ballot for the PCs as a lesser evil to the more sharply right-wing and socially conservative Wildrose Party. But with the NDP running neck and neck with the Wildrose, a different dynamic could be at play this year.

As Rao put it, “Many people are seeing that they don’t have to choose between two right-wing parties.”

What impact will this have on the federal election?

Rao, perhaps unsurprisingly given his history with the party, is bullish about the NDP’s improved provincial fortunes transferring to the upcoming federal election.

“People are beginning to see the NDP as the only real alternative to unseat the Tories in Alberta. In the last federal election, the NDP came second to the Tories in all but a couple of ridings, and won one of them. There are no federal Liberal seats in Alberta, the provincial Liberals are in shambles, and there is serious momentum for the New Democrats in the province right now.”

Most observers of Alberta politics caution that there’s a big difference between provincial politics and the federal scene. So even a shake-up as significant as an NDP government in Alberta wouldn’t necessarily portend doom for Harper’s Conservatives.

Nevertheless the prospect of an Orange Wave in Alberta is one more indication that electoral politics in Canada are not as static as some would have us believe. (Less than five years ago, the idea of the NDP sweeping Quebec was nearly unimaginable.)

People will sometimes prove more capable than expected of discerning the problem with governments that give handouts to Big Oil while dishing out austerity to the rest of society. Ideas and trends spread faster than ever in our hyper-connected society. This is important to remember with a high-stakes federal election less than six months away, lest we prematurely narrow the range of possible outcomes. 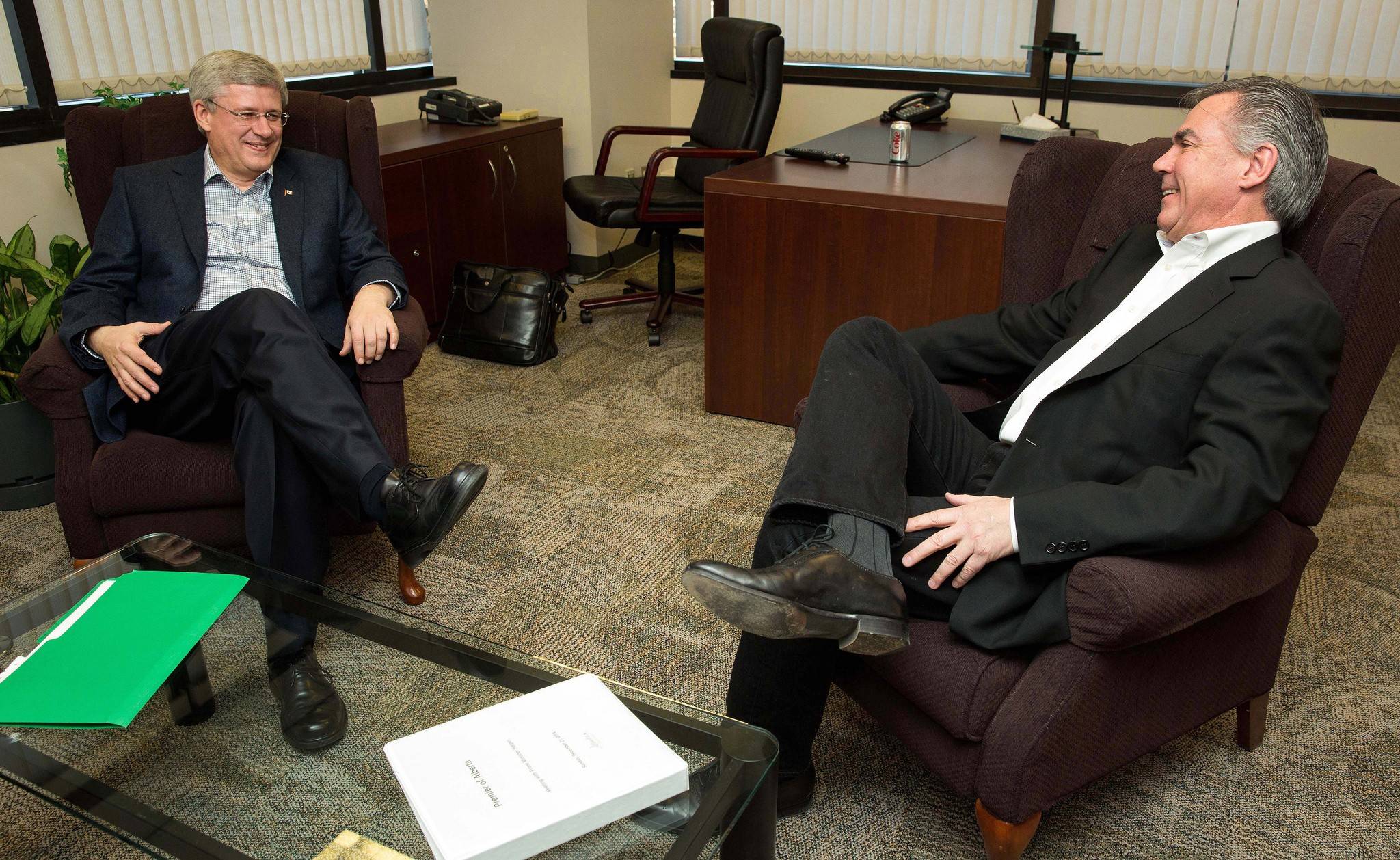