No, the Alberta tar sands haven’t frozen over

When it comes to Alberta and oil, baby steps can feel like great leaps forward

The astounding election of Rachel Notley and the Alberta NDP, and the resounding crash of the Progressive Conservatives’ ruling dynasty, has upset the oil industry and its devotees.

Though the Canadian Association of Petroleum Producers has said it will work with Notley as it would with any other government, it has also spoken against her planned royalty review, cautioning, or threatening, that job losses will ensue.

Business publications worldwide are sounding the alarm, and Canadian and U.S. media are fixated on the new government in the heartland of Canada’s oil patch.

But does the election really mean big changes for Alberta’s oil and gas industry?

“For the most part it’s too early to tell,” says Mike Hudema, an Edmonton-based climate and energy campaigner with Greenpeace Canada. “I think you’ll see the previous government’s policy of really only opening the door to oil and gas companies, I think you’ll see that start to change. Premier Notley has promised to listen to all Albertans, especially when it comes to energy issues.”

“Another huge issue is the treaty and First Nations violations that tar sands development is causing,” says Hudema. “If the NDP is going to remain true to its word to really improve relationships with First Nations, especially in the tar sands region, they’re going to have to address it.”

Notley directly addressed Indigenous peoples in her victory speech on Tuesday night. “I’m looking forward to consulting with you and learning from you,” she stated, indicating she was prepared to answer “a call to be better neighbours and partners.”

Chief Allan Adam of the Athabasca Chipewyan First Nation, a Treaty 8 community close to Fort McMurray and tar sands extraction, says he was present when Notley gave her speech.

“‘I want to work with the Aboriginal people and learn more’ — she was looking right at me when she made that statement,” he says.

The Athabasca Chipewyan First Nation has long opposed resource extraction projects that violate their rights under a myriad of agreements, including the Constitution, Charter of Rights and Freedoms, and Treaty 8, which guaranteed that Aboriginal people would be able to pursue their livelihood. These violations threaten not only the environment, but the community’s health, culture, and survival.

The election means “a significant change in regards to how we deal with the provincial government,” says Chief Adam.

In the past he has criticized the government and industry for engaging in false consultation and lacking accountability. Now, he says, “the line of communication and the work and atmosphere is going to be a lot different from what it was the previous 44 years.”

Notley talks frequently about the need to diversify the province’s economy, but this doesn’t mean shutting down oil and gas.

She has said she won’t campaign for the Keystone XL or Northern Gateway pipelines, citing the difficulty of getting them approved, but will work to make other ones happen. In her victory speech, she spoke of “the need for a national approach to the environment, and to Canada’s energy sector, that builds bridges and opens markets — instead of giving us a black eye.”

According to Aaron Saad, a Calgarian completing a PhD in environmental studies, “The NDP is unlikely to bring the kind of changes needed if we’re serious about climate change.”

Based on research recently published in the journal Nature, “we know that 85 per cent of current tar sands reserves need to stay buried if we want a better than even chance of keeping global warming below 2 C,” he says. “The Alberta NDP's support for two major oil sands pipelines — the Kinder Morgan Trans Mountain pipeline that B.C. climate activists delayed last December and the Energy East pipeline that activists in eastern Canada are fighting against now — do nothing to keep tar sands oil in the ground.”

“They’re pushing for the use of more renewable energy in Alberta and want to phase out coal, but they’re still happy to extract from the tar sands.”

Hudema sounds a more optimistic note. “I think the new government will be fairly cautious in terms of making changes given the immense amount of pressure that I’m sure oil companies are applying right now. But that said, we have seen some very strong statements from Premier Notley around wanting to act on climate change, wanting to work with the premiers to act in a growing climate crisis.”

“And that action, if it’s going to be credible, needs to deal with the rampant emissions coming from the tar sands, because they are one of the largest carbon polluters and fastest growing sources of emissions in the country.”

Many expect Notley to take a more balanced approach to energy issues, in contrast to the Conservatives’ all-consuming focus on tar sands, but to what extent remains the crucial question.

“I hope that the new government starts to unlock the vast renewable potential that this province has because we utilize less than 1 per cent of our renewable energy resources,” says Hudema, adding that this would diversify and strengthen the economy by creating jobs and benefiting not just a few multinational corporations but all Alberta’s communities.

Renewable energy has been undermined by a lack of government leadership, he says. “Alberta is the sunniest province in the entire country. We also have huge wind potential, especially in the southern part of our province.”

“Seeing the government get serious on climate and start to make the transition that science and justice are demanding, hopefully renewables are a part of that transition process.”

Whether Notley will take on the beast remains to be seen. “In terms of how strong and how willing the new government is to really get the tar sands ship in order, that is going to play out over the next weeks, months, and years,” says Hudema. “I do think you’ll see a stronger regulatory environment as we move forward.”

When it comes to Alberta and oil, baby steps can feel like great leaps forward.

“The premier has stated that she’ll be making changes in the environmental laws in regard to natural resource extraction, and I trust her that she will make the right decision,” says Chief Adam. “She means well. She’ll do well, and we will be there to support her.”

“It’s a new era here in Alberta, and I Iook forward to being part of it.” 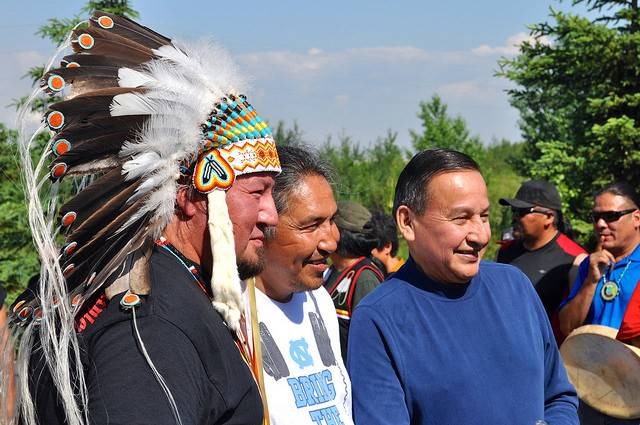