‘A risk that we are not willing to take’: Tsleil-Waututh nation releases findings of study

Last month Rueben George from the Tsleil-Waututh nation went to the heart of the proverbial beast — a Kinder Morgan shareholders’ meeting in Texas — to tell CEO Richard Kinder that the pipeline would not pass.

At a press conference this morning, George said, “Our message to the government of Canada and Kinder Morgan: now we have scientific back-up, and we are not going to let this happen.”

On the Tsleil-Waututh’s traditional territory on the shores of Burrard Inlet, directly across from the Kinder Morgan oil terminal, the findings of an independent scientific assessment of the company's TMEX proposal were announced.

TMEX refers to the Trans Mountain pipeline and tanker expansion, which involves building a new pipeline from northern Alberta to ship diluted bitumen to a terminal in Burnaby on Burrard Inlet. The expansion would massively ramp up oil tanker traffic in Vancouver’s harbour.

“The blood of our ancestors is on this land,” said Tsleil-Waututh’s Gabriel George Sr. in introductory remarks. Also present were a number of other First Nations leaders, including Grand Chief Stewart Phillip of the Union of British Columbia Indian Chiefs.

“I’m so excited now to be able to refer to our own scientific and holistic assessment based on Indigenous law,” Rueben George told Ricochet after this morning’s announcement. “Our culture and spirituality are embedded within our laws, and that means we will take care of our lands and waters and our guests on these lands.”

The 90-page report contains a number of alarming findings that are likely to bolster already robust opposition to Kinder Morgan throughout Metro Vancouver.

Here are some of the findings highlighted at today’s press conference:

The Tsleil-Waututh pursued an evaluation of the TMEX proposal in accordance with the nation’s policies, laws, and stewardship responsibilities. “Our obligation is not to oil. Our obligation is to our land, our water, our people, our life, our snəwayəɬ. According to our snəwayəɬ, our law, this project represents a risk that we the Tsleil-Waututh people, are not willing to take,” reads the assessment.

Expressing confidence in the Tsleil-Waututh’s legal strategy, George told Ricochet that the recent Supreme Court of Canada ruling that affirmed Aboriginal rights and title for the Tsilhqot’in people was an encouraging precedent.

According to a group of law professors from across the country, “the Tsleil-Waututh Assessment is a pioneering example of a First Nation acting on this authority to review and decide whether a project should proceed in its territory.”

The assessment is another setback for Kinder Morgan, whose pipeline plans were recently sailing under the radar. The assertion of Indigenous rights by the Tsleil-Waututh also represents another repudiation of the increasingly discredited National Energy Board review process currently underway for the Trans Mountain project. The NEB is scheduled to make a recommendation for or against the proposed pipeline in January 2016, after which the final decision will rest with the federal government.

Earlier this month, Robyn Allan, an economist and former head of B.C.’s auto insurance Crown corporation, withdrew from the NEB process, claiming the review was “rigged” and “predetermined.”

Led by the Tsleil-Waututh and other First Nations, the movement against Kinder Morgan includes local coalitions along the pipeline route.

Resistance in Burnaby has been especially fierce. Last fall, direct action and civil disobedience met Kinder Morgan’s attempts to carry out an exploratory drilling operation on Burnaby Mountain. Over 100 arrests were made in the course of several weeks. Just last week, Burnaby Mayor Derek Corrigan vowed to join “10,000” others and “get arrested” if that’s what it took to stop the pipeline.

For Rueben George, today’s announcement is just the latest step in a long struggle, informed by the teaching of past generations. “An Elder said to me, ‘The water of Burrard Inlet is the pulse of our people,’” George told Ricochet, describing the moments just before he took the stage to announce the scientific assessment. 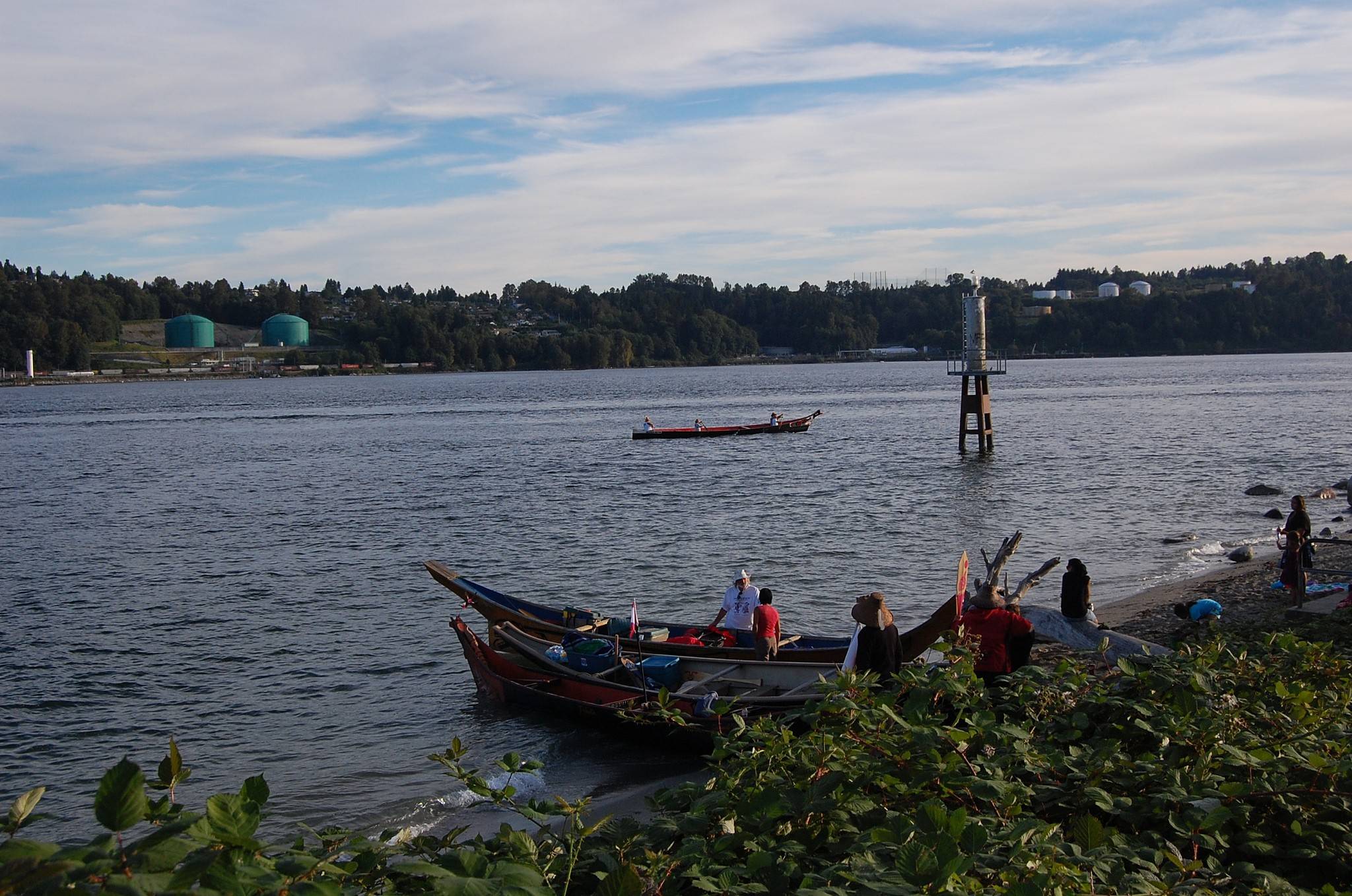